It's been a little difficult to make the time for a post lately. My family got a good round of the flu followed by a stubborn cough for a couple of weeks, but before all this happened I managed to take my daughter to see the Fur Rondy snow sculptures. 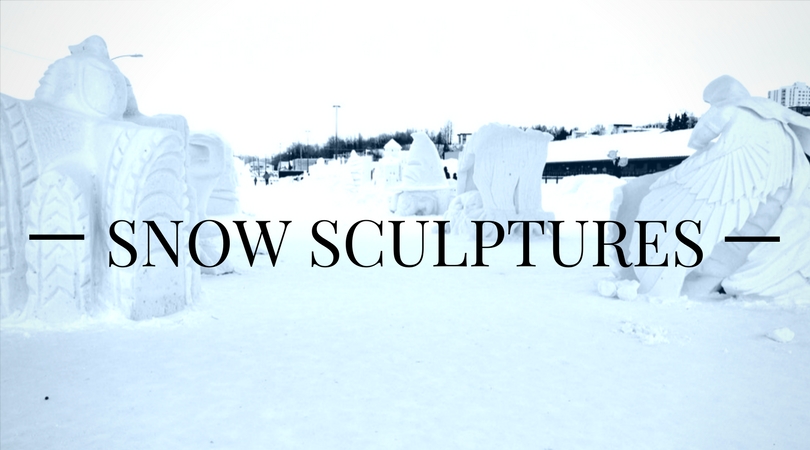 The Fur Rendezvous Festival (known as the Fur Rondy by locals) takes its name from its origin: an annual meeting of fur trappers to trade their goods. This week long event concludes with the start of the Iditarod sled dog race—its most significant attraction. Unbeknownst to me until now, the Fur Rondy has been called "the number one winter carnival in the world" by National Geographic Traveler.

It seems many online resources frame this festival as a big deal and highly anticipated by locals... but I don't really see evidence of that, and I've been an Anchorage local for over twenty years. I think I have noticed the significance of this winter festival diminish over the years and the attractions become equally less exciting. There was no World Championship Dog Weight Pull this year and the Rondy Grand Prix was removed from the schedule years ago.

Remaining events like the outhouse races are kind of a joke, but I suppose that's the point of that specific event. The most popular are probably the Miners' and Trappers' Charity Ball (which I've never attended), the beard and mustache contest, the snow sculpture competition (which pales in comparison to the World Ice Art Championship I posted about previously), and definitely the running of the reindeer (just as it sounds--replace Spain's bulls with domesticated Caribou). We usually don't partake in the festival, due to a combination of my work schedule and a lack of interest. But after recently going through my pictures from the World Ice Art Competition, I thought I'd check out the snow sculptures this year.

It was the week after the end of the festival that I found time to take a look, so they weren't in the best condition. A couple pieces had broken off of a few sculptures and the wear of the elements was obvious on others. I could have captured some better photos if I brought a flash setup, as the natural lighting was very flat (making it more difficult to capture bright, monochrome subjects), but this was more to get out of the house and show my daughter something new and different. 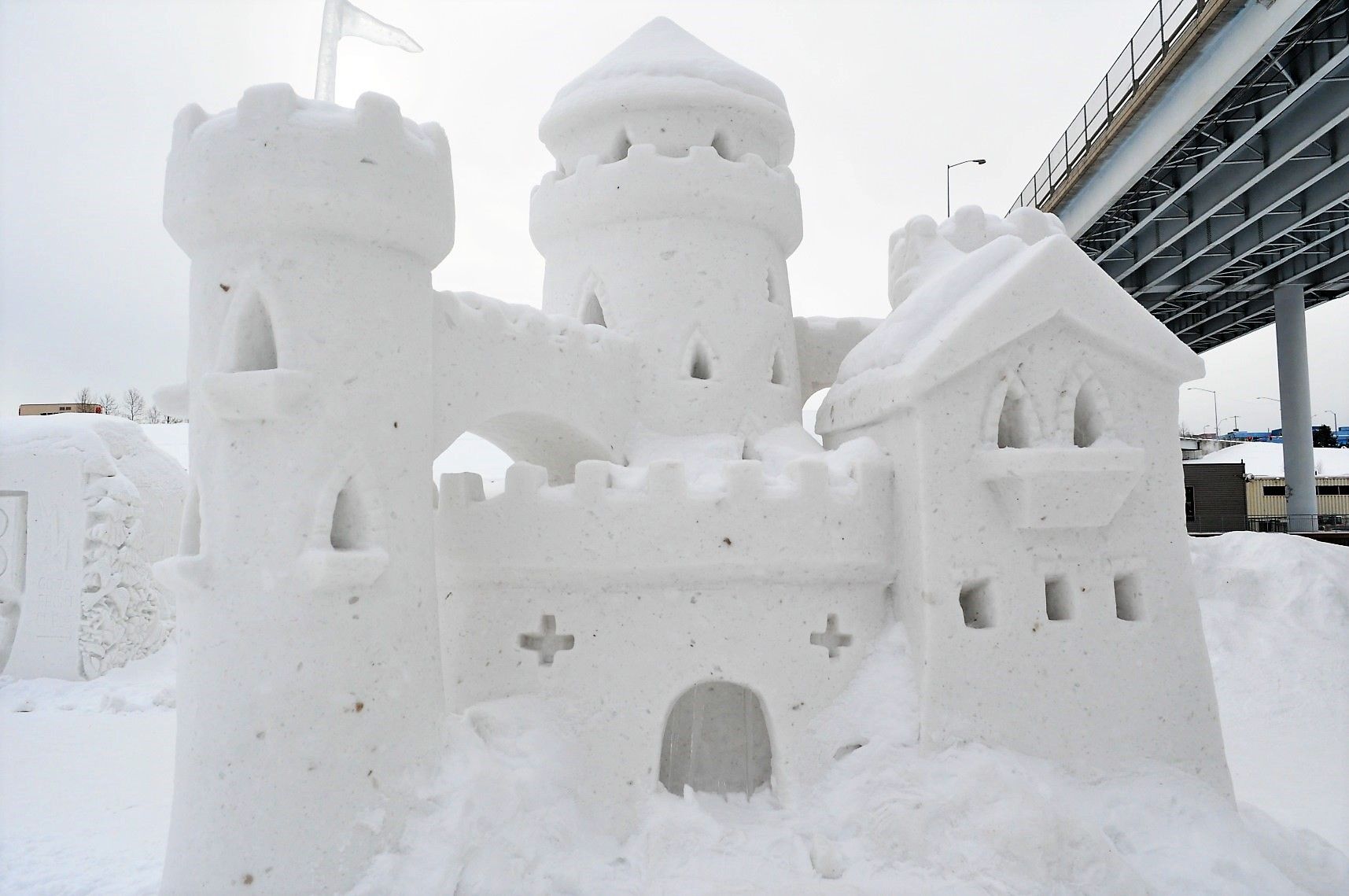 I found the effects of the weather on this sculpture interesting. Like an ancient castle that had stood the test of hundreds of years, this snow castle showed the challenge given from just one week. This next piece took first place honors in the competition. I enjoyed the detail of the wings and the pose chosen by the team that sculpted it. 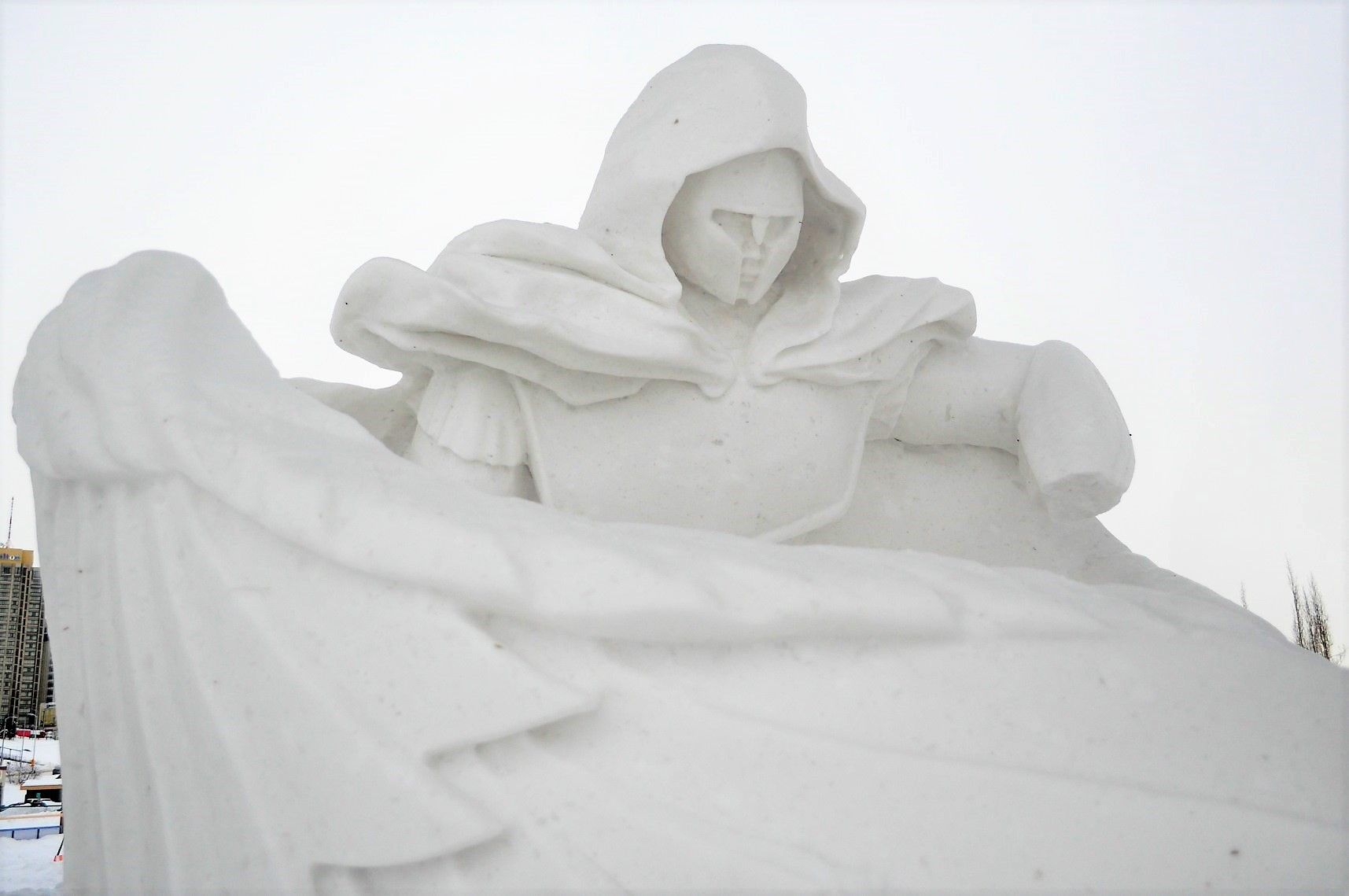 Unfortunately, with the festival over, the sculptures no longer have the protection of being closed during off hours. It seems some miscreant knocked the hands off this regal figure. 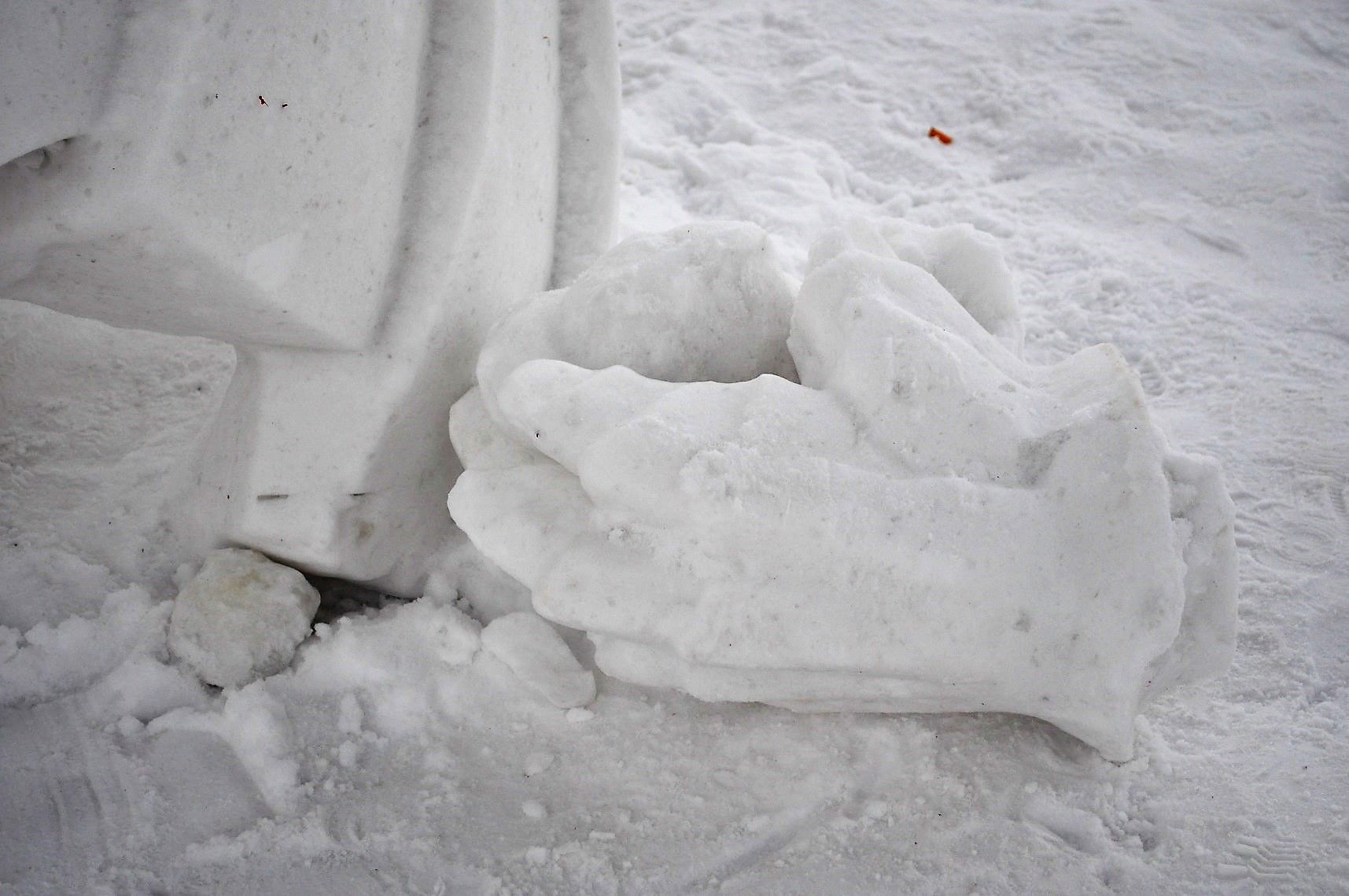 I'm not sure if this piece was intended to be anything other than abstract. I don't think I would have given it much consideration except being the only sculpture directly under the overpass added some additional interest, as if some other-worldly structure had sprung up attempting to blend with the city. The wear of the elements really showed on this one—the features are softened by snow drifts and a recent light snow fall. I really like the action captured here: an owl swooping in for its prey dashing out of a hollow log. 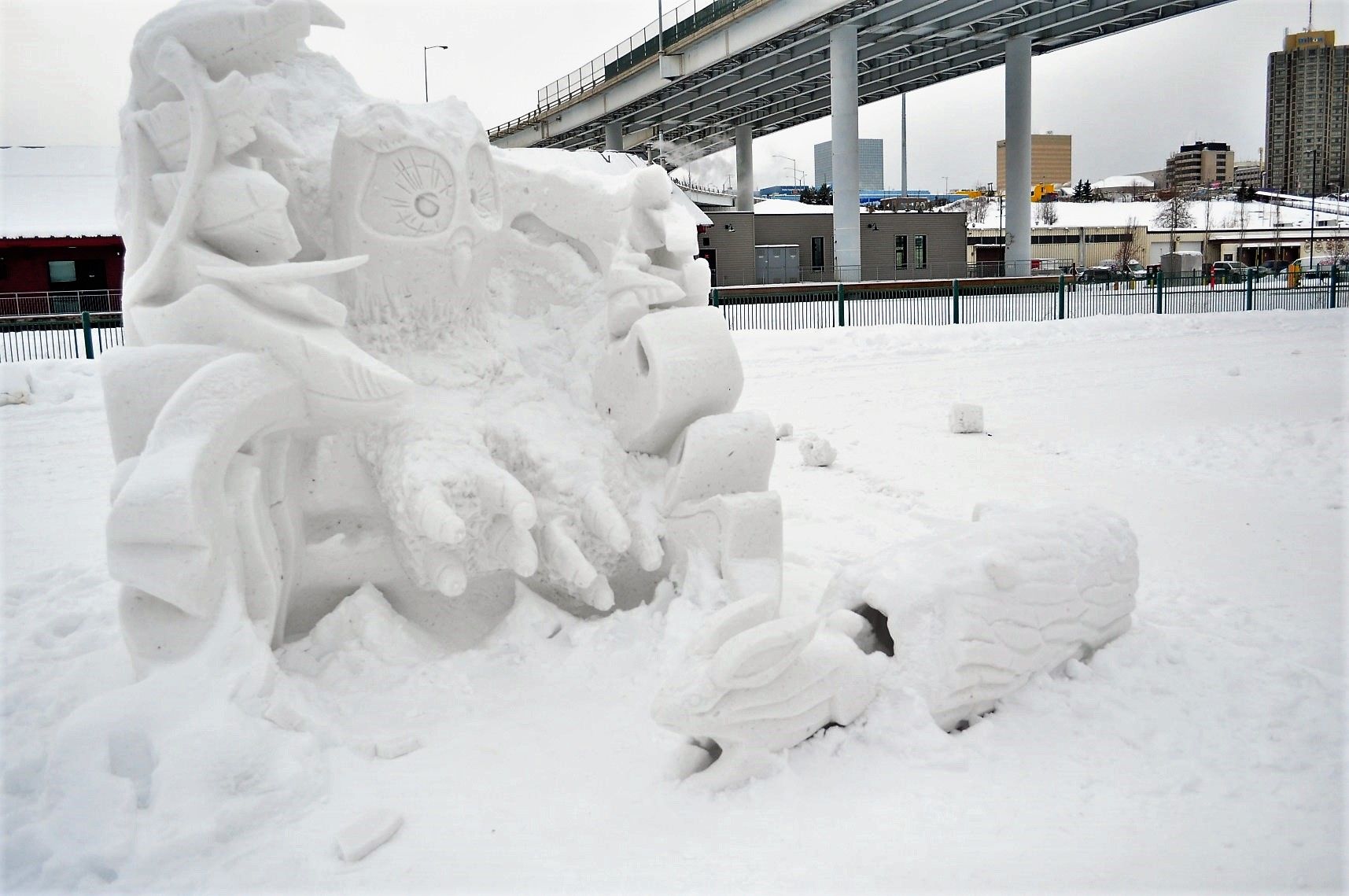 Some interesting detail on the side of the sculpture still looked intact. Another sculpting group were obviously big fans of Harry Potter; the sorting hat was their subject and I really like how they made the symbols of the four houses a pedestal. 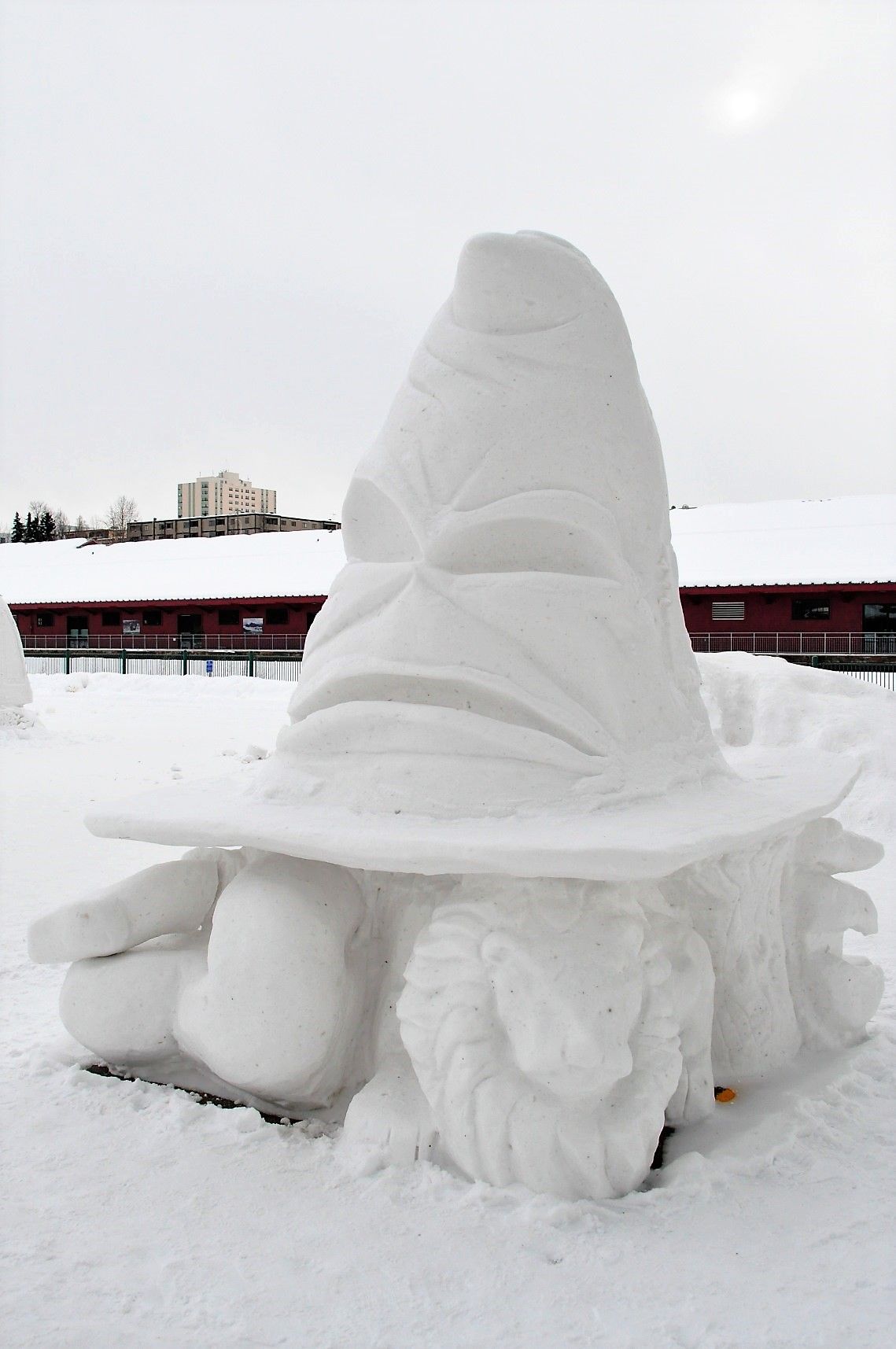 A couple sculptures drew inspiration from the local environment: an arctic fox under the aurora and the legendary mammoth. Unfortunately, these too showed deterioration, some obviously due to the weather and other wear that could have been caused by gravity or vandals (a portion of the curtain behind the fox was crumbled). 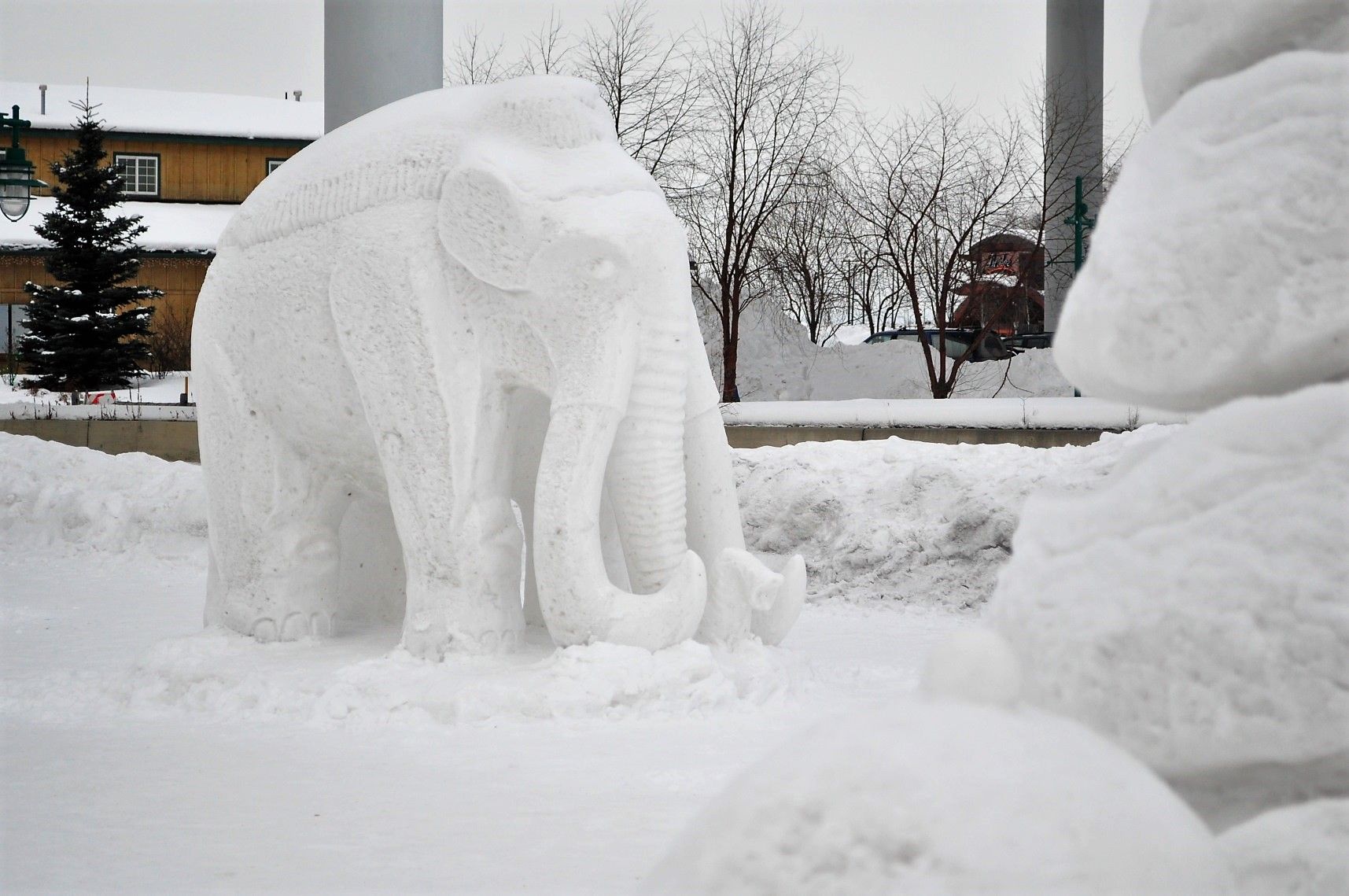 Last, I share an interesting sculpture that depicts a scene that I know zero details about. If I had to venture a guess it comes from an Alaskan Native Eskimo story. 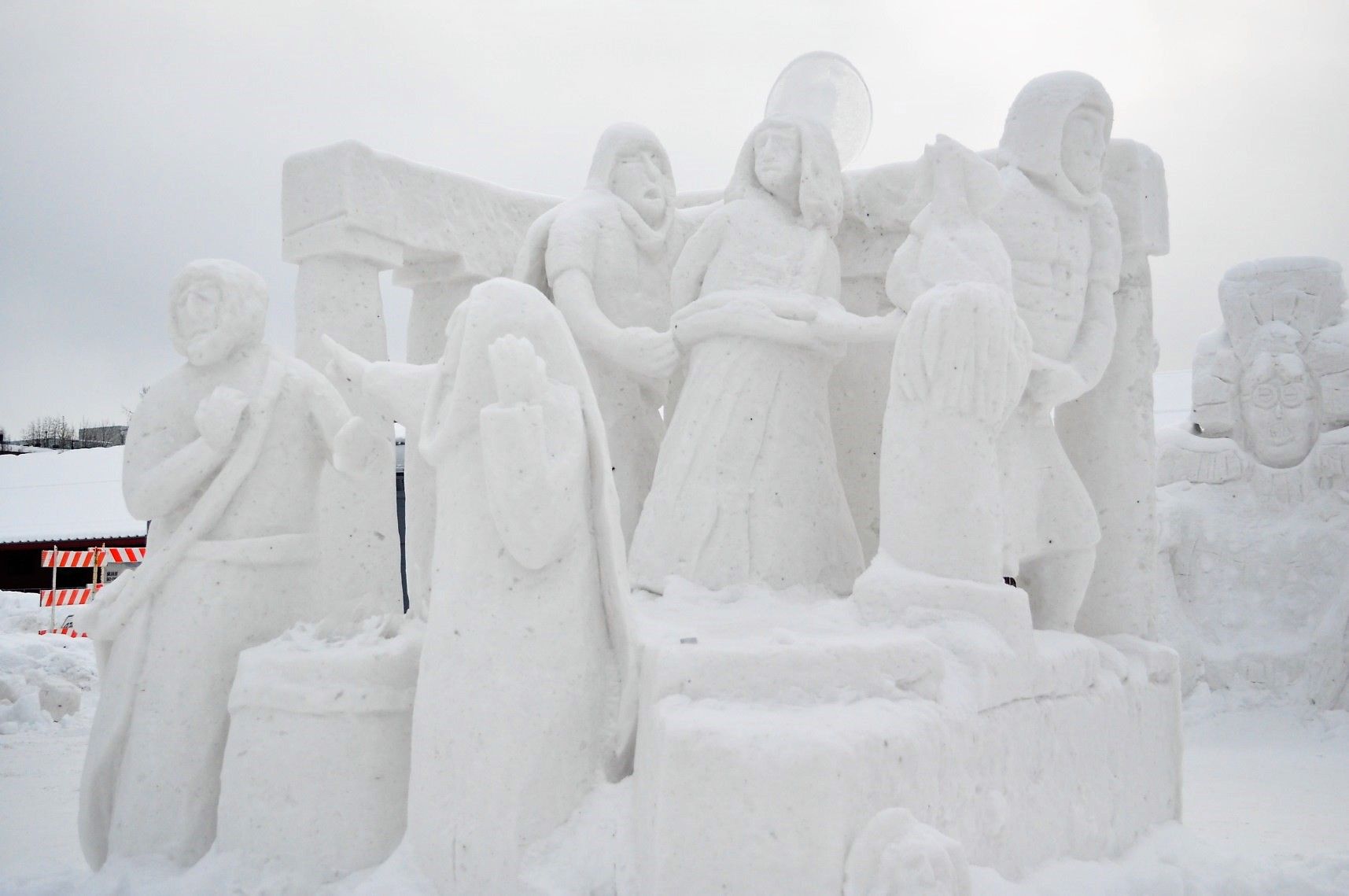 The man on the left seems sorrowful for whatever the woman to the right is scolding him about, while another woman in the background is being led away with a rope tied around her waist. Not sure what exactly is happening, but it doesn't look good. These aren't the greatest photos, but I made sure to grab my camera thinking of all of you on Steemit. I hope you enjoyed getting a glimpse at a small piece of this local annual event. My favorite part of Fur Rondy is that it also signifies the beginning of the end for winter. Let the sluggish coming of spring begin! ...I'll just ignore that April usually provides one last, huge dump of snow to crush any hopes of escaping winter.

Some of these are really cool. I liked the caped figure at the beginning, and the group shot at the end. It seems if you had a bright blue sky day it would really bring those sculptures to life!

Yeah, I dealt with what I was given on the day. We've just recently been getting some sunshine. Snow has even been melting!

You're right, the more contrast the better.

Great to see this and through the eye of a spectator. It is always difficult to photograph snow and ice. I usually shoot with the raw setting so i can pull out more detail in photoshop.
Lokos like there were so nice sculptures there.

Yes, snow always provides a challenge for photographing; I did pull out some detail with post-processing. I only snapped shots of the sculptures I thought displayed genuine talent or delivered their intention well. There were several other pieces there that were less... exciting.

Glad you enjoyed seeing these. Thanks for the comment, resteem, and vote! I'm curious, is carving snow like this similar to working with sand? I imagine sand would be more fragile and structurally weaker?

In some ways they are similar. You compact both into big blocks before carving. As far as sculpting goes snow definitely has the edge on creating dynamic forms, the guy with the wings is a good example. The use of the outline of the form usually leads to the best composition.
Being able to do surface detail is sands strong point. With snow, as you can see most of them are pretty rough and are just trying to create contrast.
I actually enjoy working with Sand, snow and ice because each one has it's own possibilities and limitations.
Thanks again for your interest in this sort of work.

Neat! Thanks for this insight.