How @dollarvigilante Popped Out of Nowhere and Intervened in My Case!

Some time ago I had an accidental meeting of Steemian here in Iceland, where there is basically no steem community at all. I did not expect to meet another one THAT soon. What happened to me a few hours ago was even more strange and had took rather extraordinary and unexpected turn....

As some of you know, I am currently staying in Iceland, where I try to save some funds for a hitchhiking trip around the world. I do it both by both writing on Steemit and working as a night receptionist at one hotel in the center.

This Sunday was my last night shift a seven-day period of work. After turbulent weekends, which is always guaranteed by Reykjavík's nightlife, Sunday is usually a very quiet night, during which I usually plan what I will do in the upcoming week off. Unfortunately, that night I got a couple of guests very dissatisfied with their stay - the couple complained about the size of the room, furnishings and a few other things.... Shortly after the check-in they went out to the restaurant, although I felt deep down in my guts that they will cause some troubles later on.

In the meantime, between answering some emails, checking new bookings and scrolling Steemit, I hear the door closing. I raised my head up and I see this face at my desk: This view made me totally stunned. I immediately recognized that it's Jeff Berwick, also known as The Dollar Vigilante! For those who don't know him - Jeff, in addition to owning the largest anarchocapitalist channel on YouTube, is the creator of the world's largest libertarian event - Anarchopulco, which takes place every year in Acapulco, Mexico. The Dollar Vigilante is also active in promoting the cryptocurrencies across the world - he has appeared in American media many times regarding this topic. There's more! He is actually an Steemian - @dollarvigilante!

My face at the moment ahd to look like this: 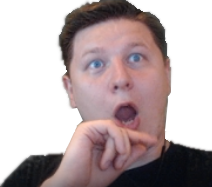 @noisy please don't kill me for making you a meme

Jeff asked me about the way to one of the nearby restaurants. I was in such a shock that I directed him accordingly and.... I just said goodbye, not being able to say anything I should say like hey, I know you, I'm a libertarian and I'm on Steemit too! :)

The Dollar Vigilante was gone from the hotel and I was kicking myself for wasting this unexpected opportunity to exchange a few words with such an interesting person, with whom I have at least a few things in common. I visited his profile on Steemit and, seeing that he had published something just an hour earlier, I wrote to him in a comment:

Some time has passed.... A dissatisfied couple of guests came back from the restaurant (probably a married couple, although I am not sure). I offered them a complimentary breakfast to make things a little bit better, for which they thanked and went to the room. I thought it was enough (it usually works). How wrong I was!

Moments later I was on the phone sorting some case out when I noticed that The Dollar Vigilante entered the hotel again! He really has to browse Steemit often as he had to read my comment in the restaurant :D When I finished he asked if "saunter" is me, we greeted each other and started to chat. I managed to ask him what is he doing in Iceland and find out that it's just a layover when all of a sudden... extremely agitated aforementioned guest came down to the front desk, all red out of anger, and started yelling at me with a stream of rage sentences. I don't remember exactly did he say, but he demanded some contact with the manager and did not spare sharp words. The promising nice chat with Steemian-anarchocapitalist turned into an even more unexpected, completely strange scene. It seems that an annoyed guy started to threaten me in some way, which seemed to piss off Jeff Berwick, who reacted with anger and with indignation asked if he really was physically threatening me. Oh boy, you can really tell that's he's a libertarian caring about the non-aggression principle! The situation became tense, so I tried to calm down both men. The sight of Jeff intervening for me, who also became all red, seemed to put the guest down a little bit :> The scene lasted only several seconds. I managed to cool down the atmosphere, letting Jeff know that I will take care of it and I will manage to solve this problem.

The fury of the angry customer made it impossible for us to talk, so I said goodbye to Jeff and wished him a pleasant stay on the island. As it turned out later, the guest was so upset because of the smell of water in the shower, which, according to him, smelled of old pipes. However, he did not realize that warm water in Iceland contains sulfur, which unfortunately results in a slight smell of eggs that accompanies the bath... There were a few other things that didn't suit them (rightly or wrongly), so they left the hotel this evening announcing that they would be demanding a refund. The man who got burned by Jeff, however, clearly softened and began to apologize to me for the affair.

Everything ended relatively well, I was still not able to talk with The Dollar Vigilante.... twice that evening. Well, maybe soon we may have a possibility since we're both coming to SteemFest³ which takes place in Kraków, Poland this year! @dollarvigilante is one of the key speakers there. As a native Pole I could not miss the opportunity to visit the biggest Steem related event, and this crazy evening has to be some strange synchronous event!

Well, see you in Kraków, Steemians :)!

Oh man, what a story. I know the feeling very well. I had a few opportunities to talk to Jeff at Anarchapulco this year but I guess I was a bit shy as he was always approached by many people. However, I think now that I should not pass another opportunity as Jeff is basically dominating my life with all the people he always introduces in his videos and the entire Anarchapulco tribe in general. Man, even my @tribesteemup membership is indirectly thanks to Jeff as I met @kennyskitchen over there.

I am coming to SteemFest3 as well and hope to meet both of you there. :)

I hope you will have fun in Poland and that all polish Steemians will be proud of our hospitality :)

what a coincidence! He has upvoted this post, I hope for you, you will meet him again :)

Being in Iceland, not knowing that it runs on thermal water. Brilliant.

Very cool @Saunter! We will be in Krakow as well. See you soon.

See you @hilarski :) You already have a typical surname :)

@saunter Meeting Jeff in person even under the circumstances is pretty cool and yes I am sure that you will have more time for a pleasant conversation at Steemfest..................

hehe, it could have been worst !! you are still lucky especially to live there !!
I hope we can meet at the fest !! Pura Vida !!

Are you from Costarica btw? They are always saying that and now I live here :)

Awesome story and small world! Jeff is the man.
See ya in Kraków!