Graphic Video: Dogs Brutally Butchered Before Their Meat Is Sold As Chicken Satay To Tourists In Bali 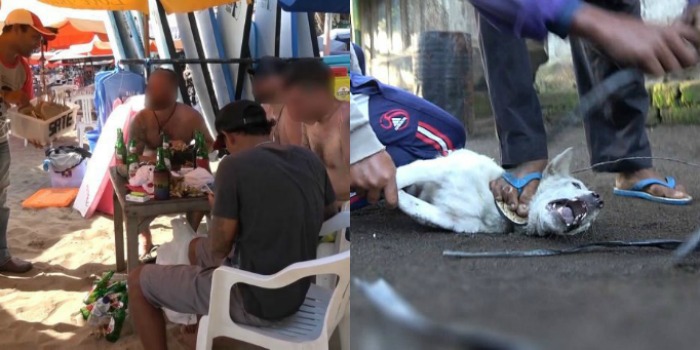 A shocking exposé by Animals Australia, an animal protection organization, has revealed the brutal dog meat trade in Bali, and how unsuspecting tourists are unwittingly contributing to it.

According to the distressing investigation, dogs are cruelly captured off the streets of Bali, hanged by wire nooses, and strangled to death or poisoned with pellets shoved down their throats before their meat is sold as chicken satay sticks to unsuspicious Australian tourists.

“Every day, scores of gentle dogs — including pets — are captured off the streets of Bali to supply a booming dog meat trade. The ‘lucky’ ones are shot. Others are poisoned, strangled, or clubbed to death. And unwitting tourists are eating them…

“Dumped in bamboo crates or plastic rice sacks, terrified dogs await the nightly slaughter with legs tied and mouths taped shut. They may languish like this for hours or days without food or water. One by one they will be brutally slaughtered in full view of their companions. And business is booming. Year on year, seven times more dogs are slaughtered in Bali than in China’s notorious Yulin Dog Eating Festival.”

While eating dog meat is not illegal in Bali, killing animals brutally or eating meat contaminated with poison is against the law, Animals Australia's campaign director Lyn White told the ABC:

“The dog-meat trade breaches animal cruelty laws and food safety laws. That is a statement of fact… Tourists will walk down a street, they'll see a street store selling satay but what they are not realizing is the letters RW on the store mean it is dog meat being served.

“Mobile dog meat vendors are deliberately targeting tourists on beaches and are prepared to lie about the origin of the meat to get a sale. [Poisoned] Dog meat is essentially filtering into the tourist food chain [in Bali].”

In a gut-wrenching footage, dogs are seen being shot in the street, being cruelly captured, being placed into bags, and being brutally butchered before their meat is served on the Balinese beaches. Viewers' discretion advised:

The video shows vendors duping tourists into thinking that dog meat is nothing but 'chicken satay sticks or kebabs'. “Satay just one dollar,” a vendor is heard saying on camera. “Satay chicken, not dog?” one tourist is seen asking. “No, not dog,” the vendor is seen confirming. “I’m happy just as long it’s not dog,” the tourist is heard replying before buying and consuming the dog meat.

83-year-old Pak Puris, father of a restaurant owner who catches dogs in Kintamani in Bali's north, admitted to selling dog meat under the garb of chicken to Animals Australia's undercover investigator posing as a documentary maker interested in local cuisine. The investigator, known only as Luke, was aghast:

“The catching was fiercely aggressive. The dogs screamed and writhed as the noose strangled them. Some tried to bite through the ties to free themselves but with their muzzles lashed, their attempts were futile.

“As an animal cruelty investigator, I have trained myself to cope with cruelty, but nothing prepared me for the brutal catching of dogs in the village. I focused on my camera work but it was gut-wrenching to hear these dogs... screaming and wailing in terror and sorrow. Aside from the cruelty, the greatest shock was to discover that tourists are unwittingly eating dog meat and fuelling the trade.” According to Dr Andrew Dawson, medical director at New South Wales Poisons Information Center, poisoned dog meat could lead to symptoms such as nausea, muscle aches, shortness of breath as well as organ and nerve damage:

“If you are eating, for example, a curry and it was including bits of the animal stomach or the heart, then you would expect really high concentrations of cyanide... which could be fatal.”

Hass been i m vote,

What about poor families that need to eat? And that's how they solve the stray dog problem.

You are a dumb westerner, you have no idea what it is like in these countries

Right. Lol. Your Another extremist. Pitty yourselves somewhere else.

I am bringing some perspective. Have fun shoving bananas up your ass you extremist vegan

Learn to take care of yourself. Then you can help the people around you. The world wouldn't have to care for so many useless idiots. Many who really should have been deposited into a kleenex or wiped off the chest.

I refuse to believe you are this stupid. You are not a very good troll

Your still a complete moron.

Sadly doesn't surprise. Greed and ignorance seem to prevail in most cases were humans are involved.

Hopefully we keep self medicating with antibiotics, and something comes along that wipes a good number of us from this planet. Call it an extremist view, but we really aren't that great of a species all things considered.