Gobekli Tepe: 8,000 Years Older Than the Great Pyramids at Giza

rettigphotos (40)in #archaeology • 3 years ago (edited) Gobekli Tepe, found in modern day Turkey, is a site that is currently being excavated by archaeologists. The site has been dated to be from around the 10th millennia BCE, which means it is almost 8,000 years older than sites like Stonehenge and the great pyramids at Giza. This means that the site would have had to have either been built by hunter-gatherers, which before was thought impossible, or our entire account of our human timeline throughout history is wrong. 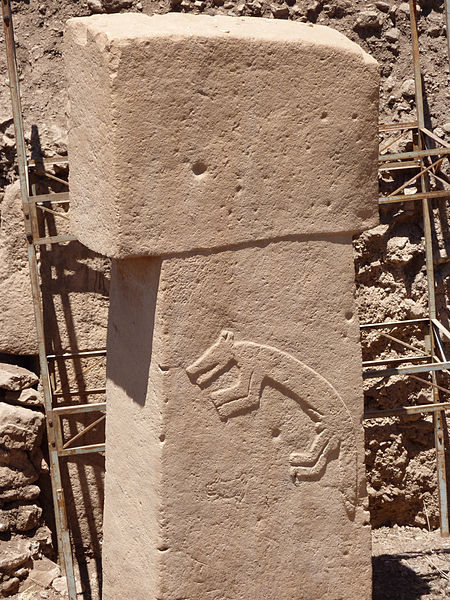 Hunter-gatherers do not live in one place for a lengthy period of time and are always on the move to track down the necessities of their early lives. It is completely out of the norm for humans from this time period to gather in one spot long enough to not only plan something like this out and to actually carve and move the stones into place. Scientists think that Gobekli Tepe was built by several tribes from different areas and used for a place to meet and observe some specific moment such as the spring equinox or summer solstice. The site is made up of enormous megalithic stones and is divided up into different sections. There are carvings of animals such as monkeys, reptiles and birds. The carvings seem to be divided into different areas depending on what location they are local to. This may have been done in order to use the animal symbols to symbolize what section was to be used by each tribe depending on the animals native to the area that the tribe came from.

Some human remains have been found in the actual structure but there is no sign of day-to-day objects. This is what leads scientists to believe it was built for use only during specific times of the year for tribal ceremonies that related to things like religion, beliefs and astronomical events.

Gobekli Tepe looks to have been purposely buried at some point in time for some unknown reason and has unfortunately been excavated at less than 10 percent at this point in time. It most surely holds many secrets for scientists to discover that may completely change our idea of how early man progressed.

Sort:
[-]
geopolis (54) 3 years ago
Your post has been personally reviewed and was considered to be a well written article.
You received a 10.0% upvote since you are not yet a member of geopolis and wrote in the category of "archaeology".

To read more about us and what we do, click here.
https://steemit.com/geopolis/@geopolis/geopolis-the-community-for-global-sciences-update-4
$0.28
1 vote
Reply
[-]
sooflauschig (59) 3 years ago

Interesting article, I definitely want to know more about this.
It would be nice if, on future articles, you could provide references for your information, in addition to the provided picture references.

Helloo @rettingphotos
Me, @menulissejarah (writing history)
I see articles and photos on your post, have a historical, education, and cultural value of an area. This post is certainly very interesting to add insight in the field of history.
If you do not mind, I will resteem this post in my account. Thanks.
Date:April, 1, 2018