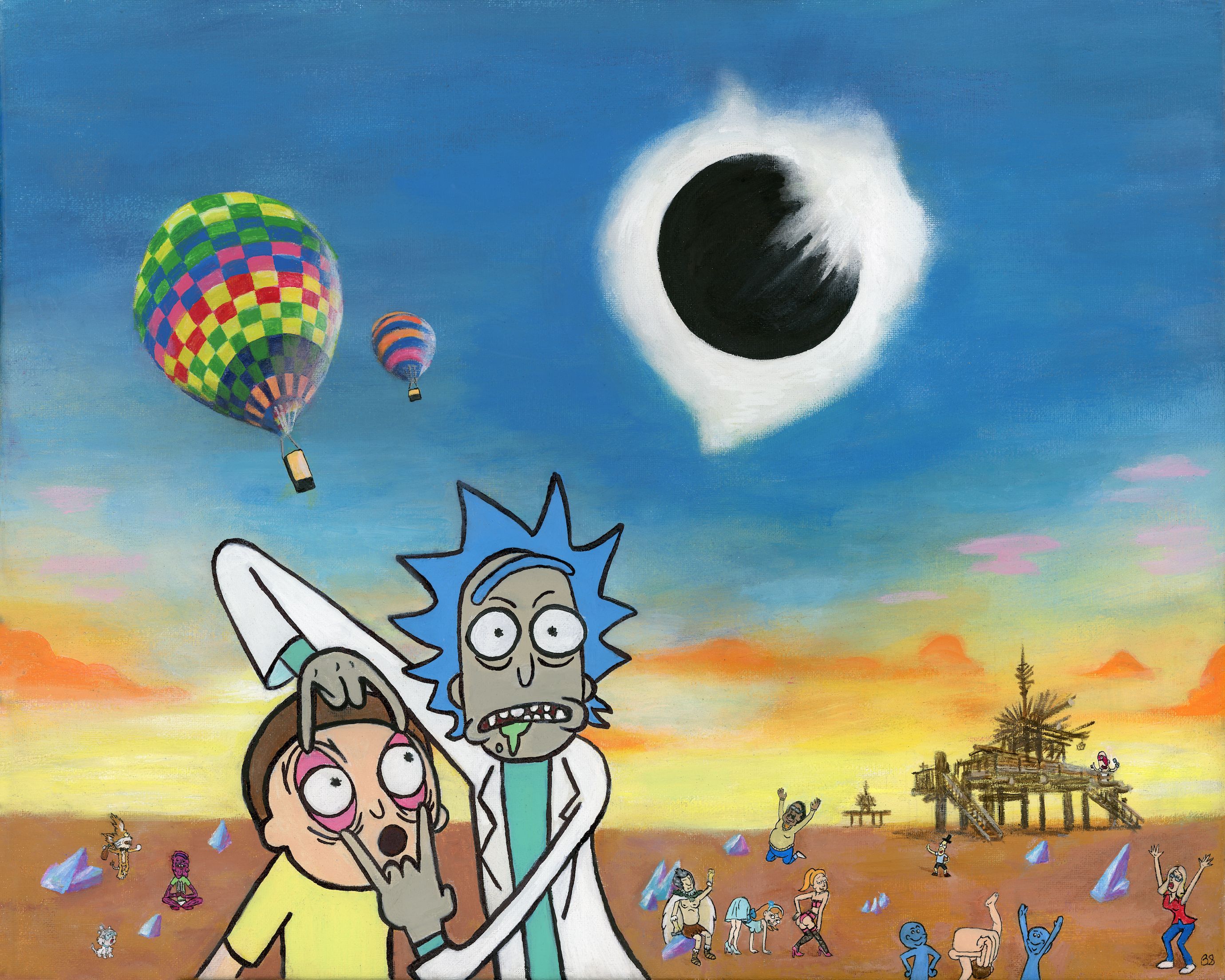 This painting is inspired by Rick and Morty and the Solar Eclipse that we had back in August. I had the extreme fortune of attending the 7 day Global Eclipse Gathering in Oregon where I got to watch the eclipse in complete totality with over 40 thousand festival goers. It was a truly magical experience. I plan to write a post all about my amazing time there but for now I want to focus on my painting inspired by it. The idea for this painting came to me during the actual eclipse. I have this classic scene from the show Rick and Morty on a backpack and as I was watching the solar eclipse it was propped up on my feet so it wouldn't get super dusty. As I was getting comfortable I looked down and realized it looked like Rick and Morty were watching it with me as well! I just had to laugh and instantly thought I MUST PAINT THIS!!!! So when I got home thats exactly what I did! I will share with you now some of the process of the painting. With the company of my kitty Orion, I started off painting the eclipse and the sky. I looked at pictures I have seen from the festival.. My favorite one was taken by a friend of mine named Jamal Eid, that featured not only the beautiful and unreal solar eclipse but also the Solar Temple that was constructed for the festival as well as an excited crowd of people. I wanted to make my sky similar to the one in his picture but more close to the colors of skies I've seen in the show. 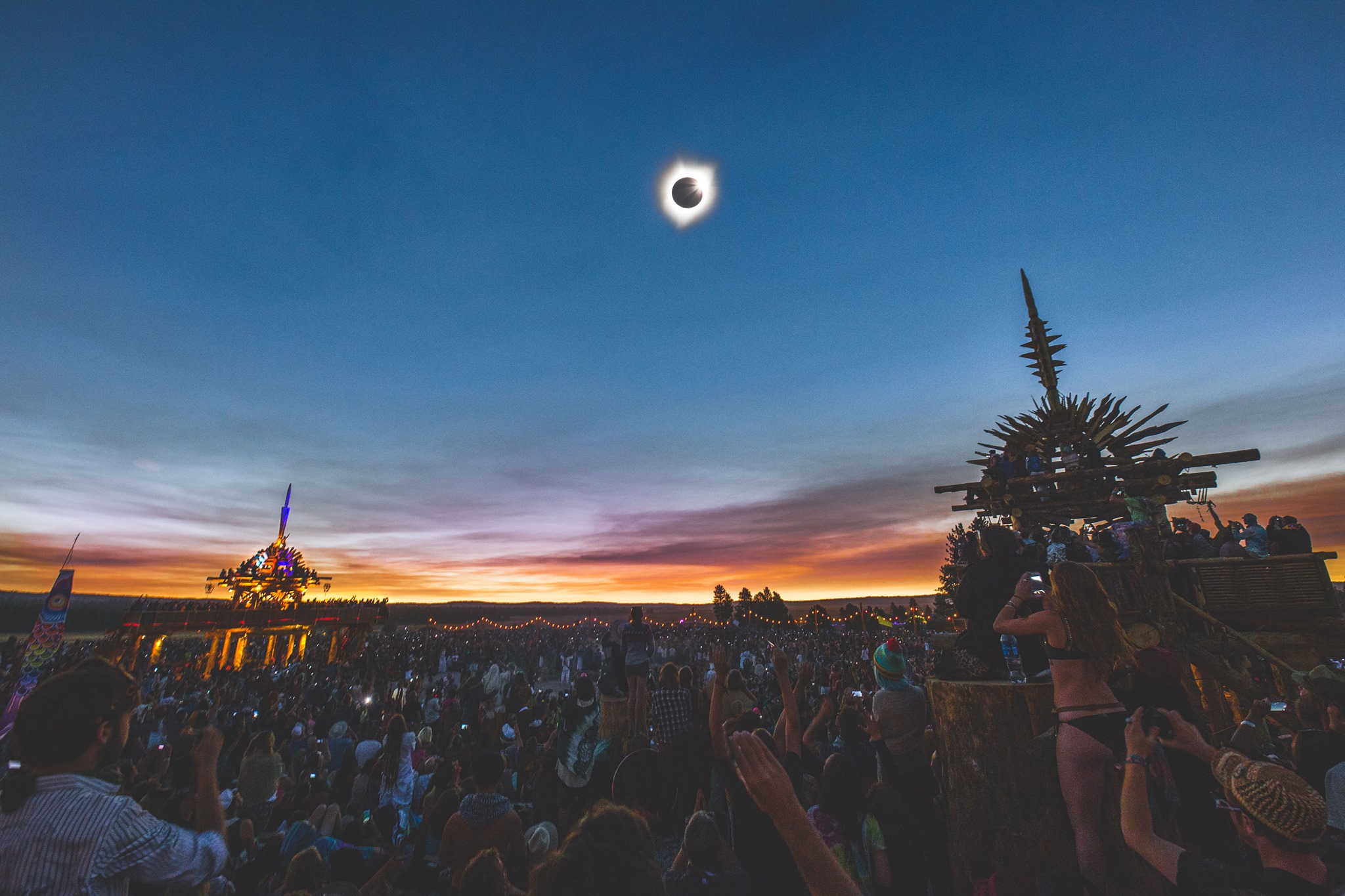 Next I started painting my freehanded Rick and Morty drawing... 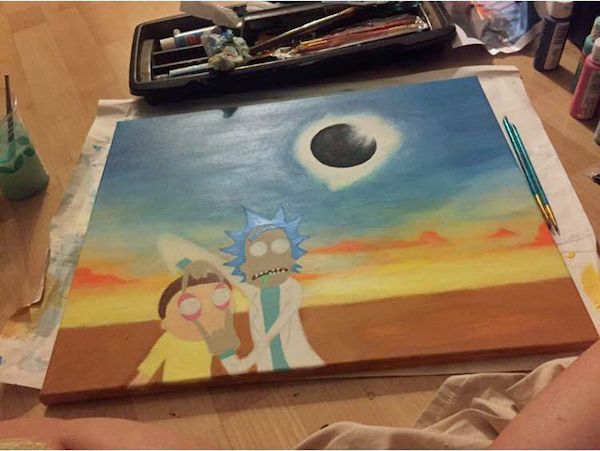 and then I outlined them with Posca Markers. Once Rick and Morty were outlined, I painted the Solar Temple, some hot air balloons I saw at the festival, and my first character in the crowd, Morty's sister Summer. When I add new things, first I paint them in all white and then start painting the colors after, that way the colors still pop. 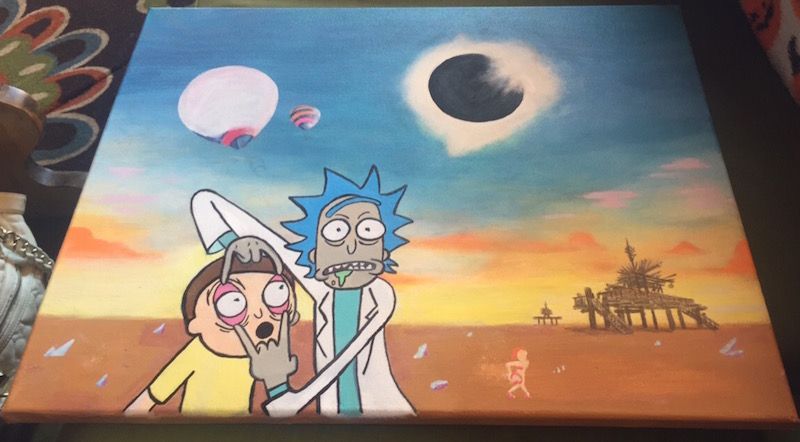 I paint each feature in the character one by one, sometimes leaving tiny spaces in between or making certain parts less opaque so it's not just a big white blob and it's easier to fill in with color after.

To do the outlines of the smaller characters I used a very fine point pen (0.1)

I'm actually new to using copic and posca markers and am much more comfortable with a paint brush, so this was a fun and exciting challenge for me. 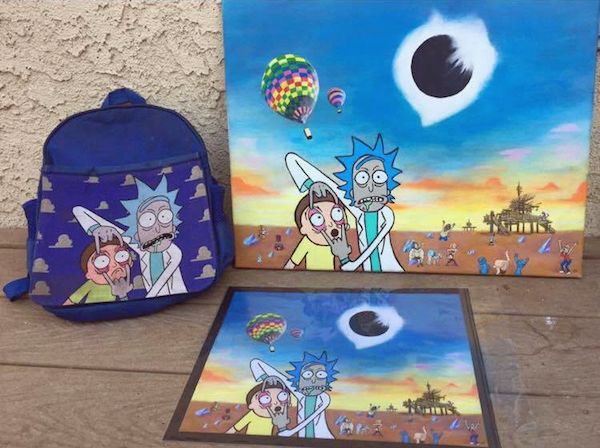 Pictured above is the backpack that sparked my idea, the original painting, and a print of my painting. If you would like a print they are still available here! If you've made it this far, thank you very much! I hope you enjoyed my post! I'm happy to hear critiques and to answer any questions you guys have. Lets start a discussion! :) 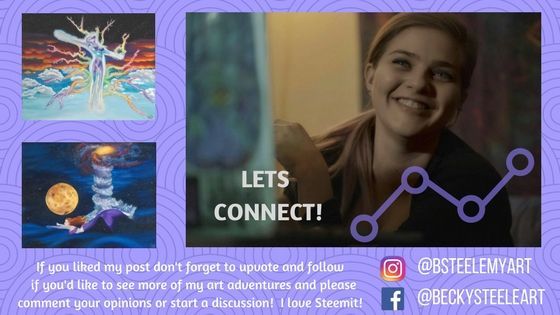 Rick and Morty!! I absolutely adore this painting!

thank you so much!!

OMG This art is so cool.. Such a great work. Amazing !!

Thank you so much!!

Wow this is so great. First off, you are instantly on my "all name" team, great username! I watched the eclipse from up on top of Green Ridge just a little bit west from where you were, but out in the middle of nowhere in the national forest down some unmarked roads. Such a cool experience. Glad to hear you had fun at the festival as well. Your painting rocks, I love the combo of the paint and the markers! Great technique! Thanks for sharing the process. Followed. Cheers - Carl

Thank you so much !! Haha I love puns:) I’m glad you got to see the eclipse also! Yay! I definitely hope to see more in my lifetime💙 I’m gunna follow you back! great to meet you💙

wow! I wish I could do this.

with time and practice, I believe you could:)

that would be great !!

Yoooooooo like I said, congratulations on getting @curie upvotes!!! You're doing great work on here, keep on being passionate about sharing your art with the world, and you will keep on growing! :D

thanks ! wish bullshit hw wasn't taking up so much of my time!

wow what a great artist you are, apart from pretty you are very creative, what other talents you have?, I think you are a set of beautiful things, thank you for sharing your great work, I liked the color of the paintings, have a great week dear @bsteelemyart

Aw thank you!! I’m mostly just good at art! I do sculptures also and am studying animation! I hope you have a great week too!

ohh i definitely do!! I just made a discord recently so I'm not 100% on how to use it but I'm super down @carlgnash from the @humanbot Human Certified Original Works Initiative has manually determined this post to be the original work of the post author. To learn more about this certification visit the Badge of Originality genesis post:
https://steemit.com/art/@carlgnash/the-badge-of-originality-human-certified-original-works

Thanks for being an original content creator! You rock!

thanks you rock also!

As a Rick and Morty fan, I love the picture! I wouldnt have guessed you saw the eclipse and then think of doing a R&M painting! Its really fun picture and Im going to use it as wallpaper :D Thanks a lot for the post, Im resteeming you!

Thanks so much!!! I’m gunna follow you! I have some more rick and morty art I’m working on , stay tuned 💙

This deserves some attention. Upvoted and resteemed...

thank you so much! you da bomb!

Such a rad painting. Cat facts lol. Didnt see the eclips myself but had a Rick and Morty experience. ;;;)

thank you!! I know they keep spamming me 😂. Tell me about your rick and morty experience !

Oh i just layed in my hamack at home and got pulled into the clouds. Took a lil trip

that sounds amazing! i'm obsessed with clouds. have some tattoed on my back with "some days all i do is watch the sky"

That's a nice one! Thank you for sharing.

Thank you! Thanks for commenting 💙 I appreciate u!

No problem! It was worth it ;)
Btw., I have an art contest if you're interested in earning some crypto. for more, visit my blog.
(I hope you don't see this as a spam! )
be well.

OH NICE! This is absolutely awesome!

Hilarious! I like when art is seriously done, without taking itself too seriously.

Cats respond better to women than to men, probably due to the fact that women's voices have a higher pitch.

A commemorative tower was built in Scotland for a cat named Towser, who caught nearly 30,000 mice in her lifetime.

It may take as long as 2 weeks for a kitten to be able to hear well. Their eyes usually open between 7 and 10 days, but sometimes it happens in as little as 2 days.