Fine arts are painting, sculpture, architecture. The science that studies the emergence, development and modern work in these areas is called Art History. It is relatively young science, because only in the 20th century it became independent from a general history whose domain was very long. Defining this subject of learning as well as the evidence on which art history rests becomes a new modern science. Its basic definition is: Art exists since there is a man which proves scientific evidence. The history of art is closely related to other social sciences such as history, archeology, ethnology, musicology, etc.

On the basis of the definition itself, it is clear that the study of art takes place in the distant past, and the first exhibits are dated in the prehistory in the ice age. Magic is considered a cradle of art. Magical rituals are conceived as the syncretism of many different arts. The first artist in every sense is a tribal door. 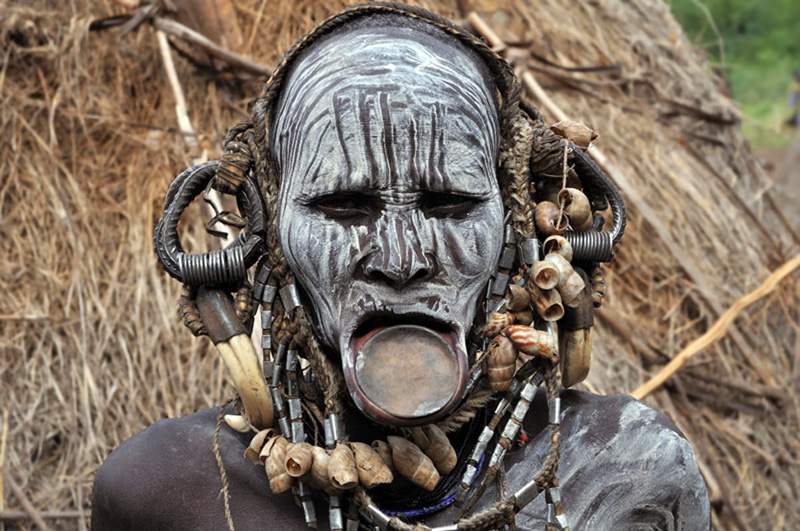 Prehistory is a huge time period in the development of mankind before the emergence of civilization. We learn the art of that time through 3 time relative stages: 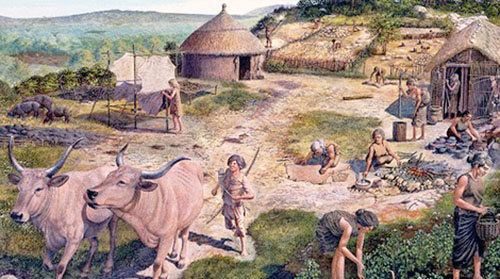 There is no architecture at this time.

In the rough terrain of Central Europe, hundreds of exhibits of a typical character are discovered. It is about figurines of clay or soft stone height up to 36cm, which represent the fertility goddess or the mother goddess. It's a woman's act. When making up, head, legs, hands are neglected, and the parts of the body that indicate the nativity role of a woman are accented. The most famous specimen is the Vilendorf Venus found in Austria in the village of Vilendorf. 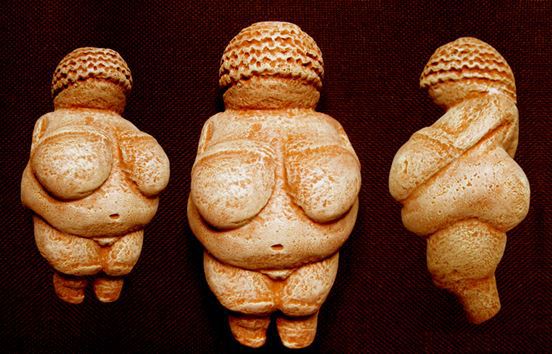 The sculpture of the Paleolithic favors the mother of the protector of the female role of nativity. It is evident that nativity influenced the number and the number was an important factor in survival.

Painting was discovered in 2 places, Cave of Altamira (Spain) and Lascaux (France). Both sites link the topic of images that cover their walls. It is about hunting, the motive that prevails is the animalistic development of the motive (Deers, Bulls,Bisons, Horses). There are no drawbacks of movement, movements are without fail. Such screening of the animals in the move will only occur later in the Renaissance. Hunter (male role of foster parent) is shown extremely stylized.

The masterpiece in the Altimire is a Wounded Bison and a Black bull in the Lascaux 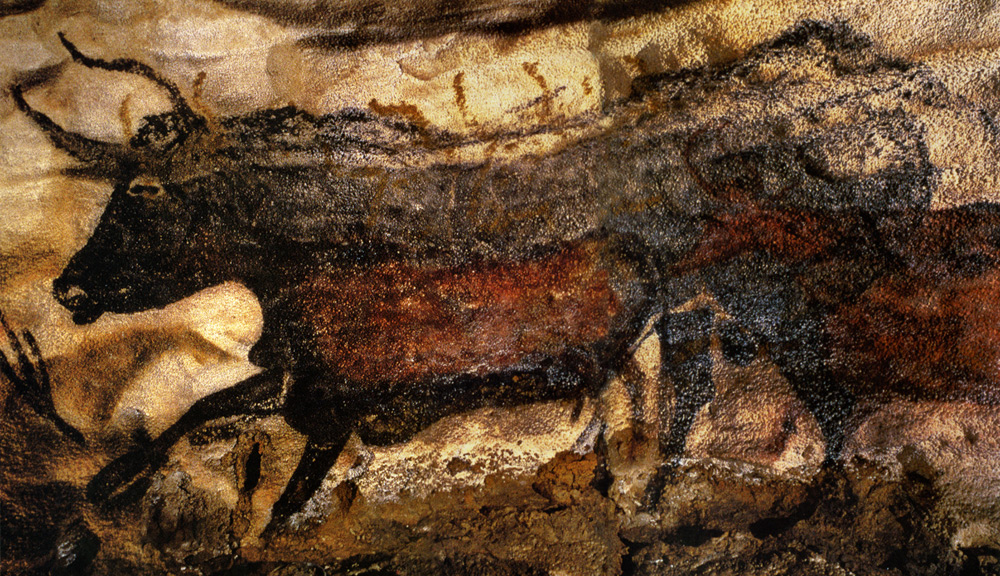 The oldest site on the European soil that proves that a man began to build Lepenski Vir. Foundations were found in the form of a trapezoidal or rhomboidal base of the building and the same dated in the early neolith. Unfortunately, on the basis of these stone remains it is impossible to determine the purpose of the object or try to reconstruct the appearance. 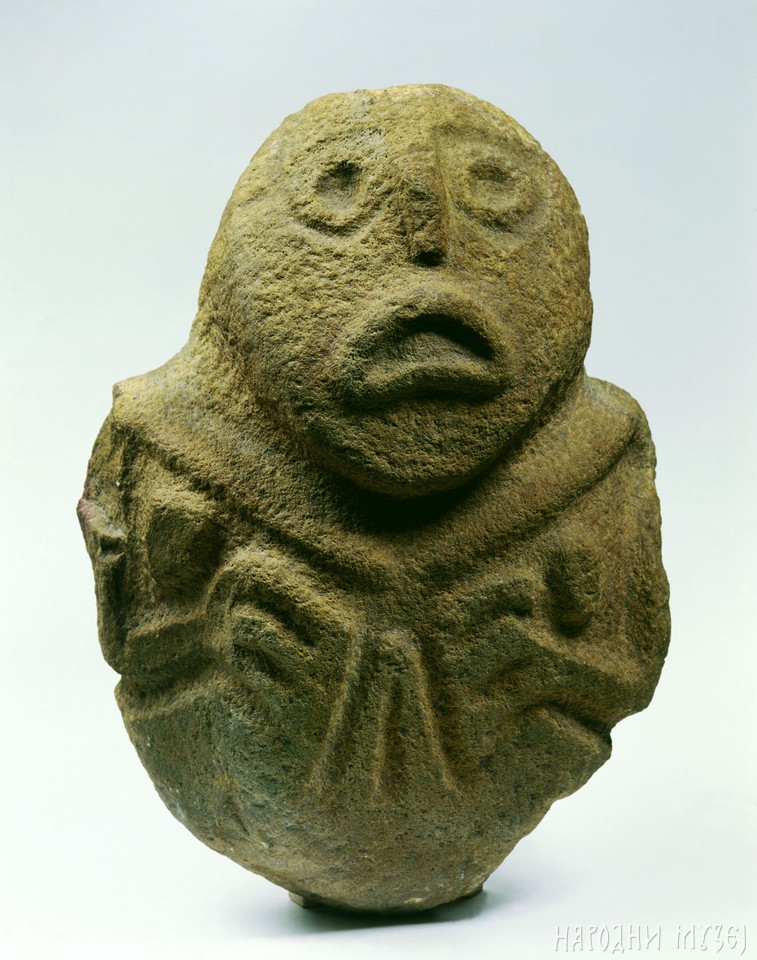 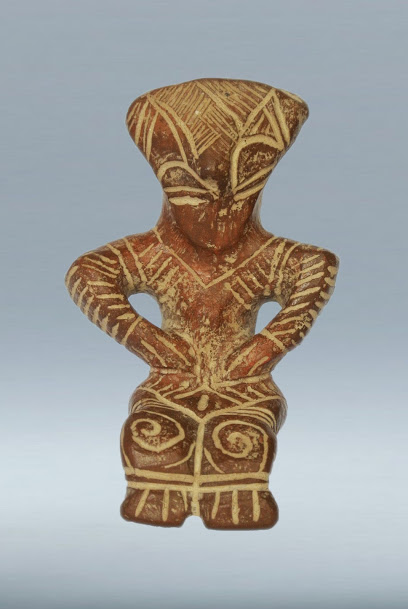 Stonehenge is a prehistoric monument in Wiltshire, England, 3 km west of Amesbury. It consists of a ring of standing stones, with each standing stone around 4m high, 2.1m wide and weighing around 25 tons. It has rounded base in wich center is an altar. On edge of the base, upright stone blocks were placed. Every two adjacent stones carry over a raised horizontal stone. This shrine is preserved to a greater extent, but not completely. It's base represents children's drawing of the sun. Carts from Duplja are the first artistic figurative image of the Sun god. Found near Vrsac built from clay. These are actually dual-carriage cart which are pulled by 3 birds while they are driven by the god of the sun shown as a young man with a bird head. It is considered to be an excess of Apollo - a Greek god of the sun, which is also shonw while driving dual-carriage cart but pulled by swans. 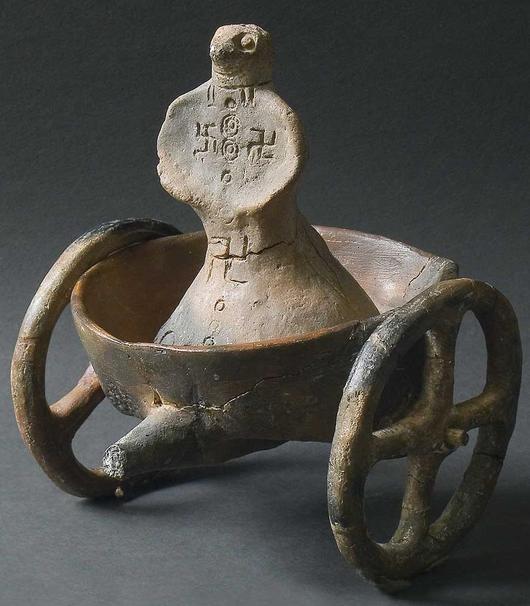 About 3500 BC will begin the first literacy with which the prehistoric period ends. The general view is that prehistoric art in its entirety has an existential character while style has evolved from naturalistic perception in the Palaeolithic through the Neolithic Revolution and the geometric style to abstraction characteristic of the period in the metal age.
Thanks for reading! If you like my work, you can leave upvote or comment and you can always follow me! :)