In case you've not been fortunate enough to come across @derosnec, she's a multi-talented artist, singer and kick-ass film editor to name a few of her talents… oh and if you're familiar with the show "Vikings", she looks like Lagertha :)

Last month @derosnec ran a writing competition around a wonderful drawing that she'd done in high school. It was part of her "Nina's High School Sketchbook" series.

The sketch is called "The Daemons of Life are Getting Old" and my entry can be found here.

Now I didn't win the SBD, but perhaps I really won overall as my fab hubby @matthewwarn, bought the sketch for me… say what!!

As easy as pie, SBD changed hands and about a week later a super cool envelope arrived in the chilly Midwest from sunny California!! 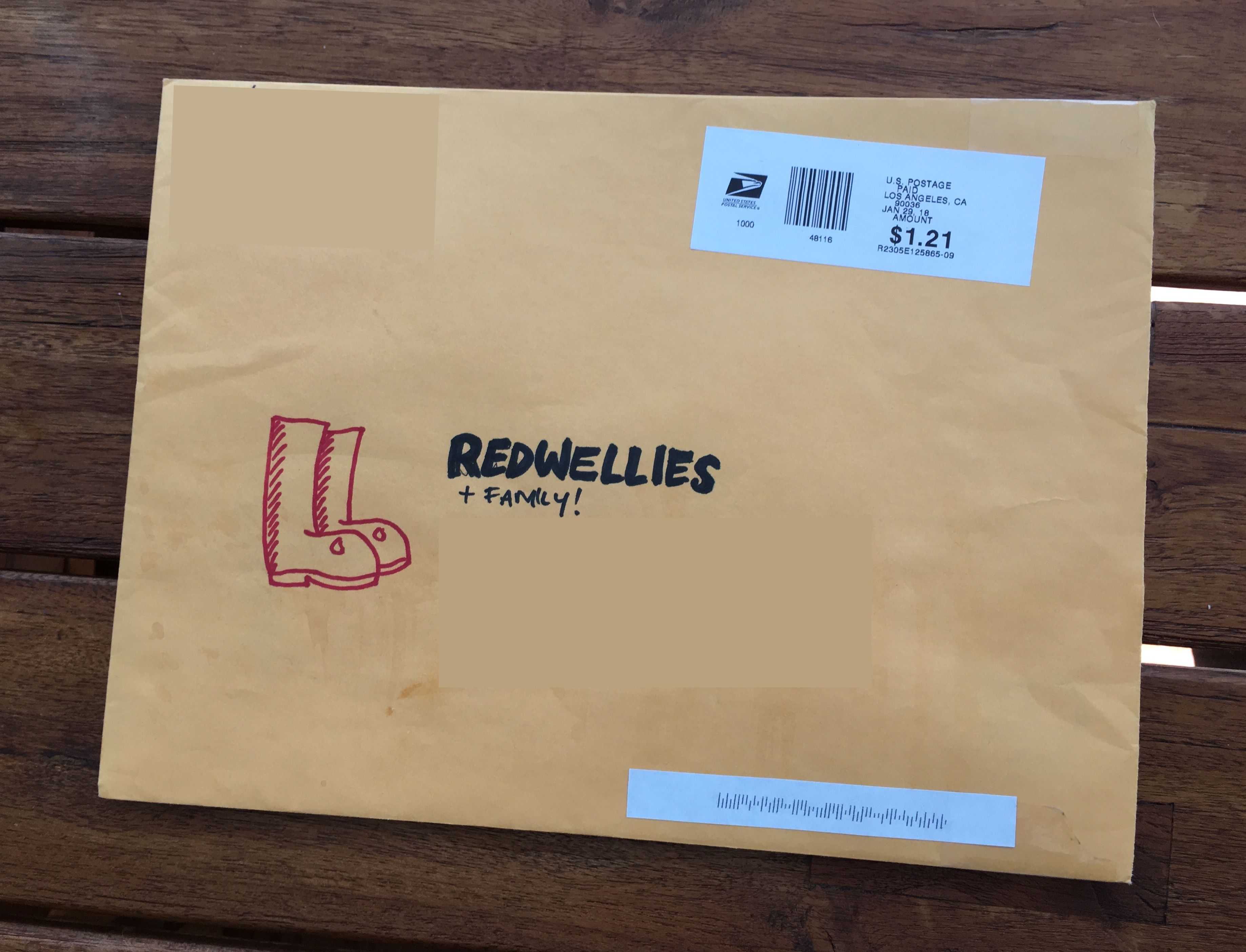 Love the @redwellies on the envelope! And the little mouse :) 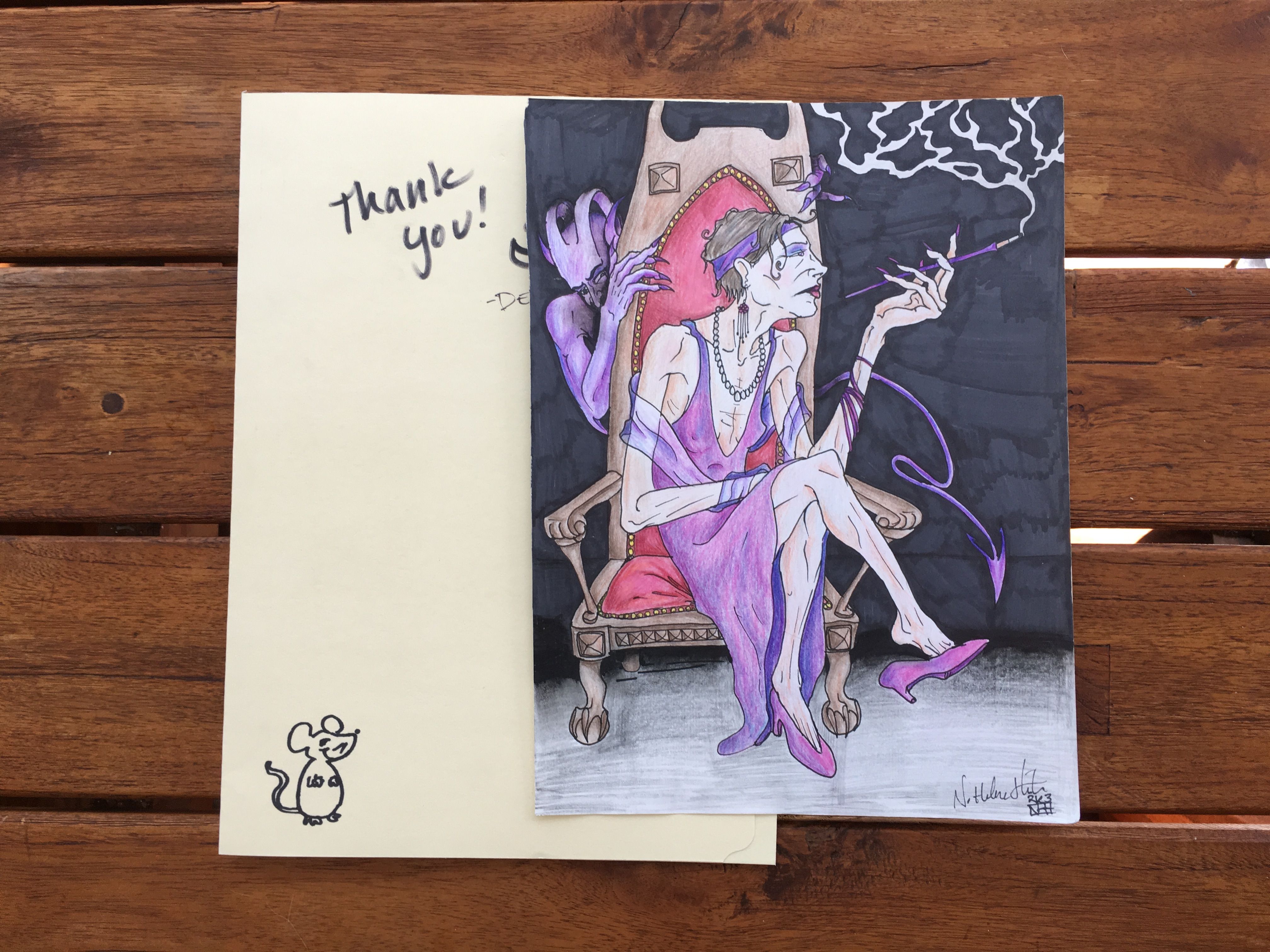 So excited to receive her!! Today, I finally got around to framing her, and I present "Amelia" in all her glory. She's been triple matted to fit a 16" x 20" frame and looks fantastic!! The story I wrote about her is taped to the back for posterity :) 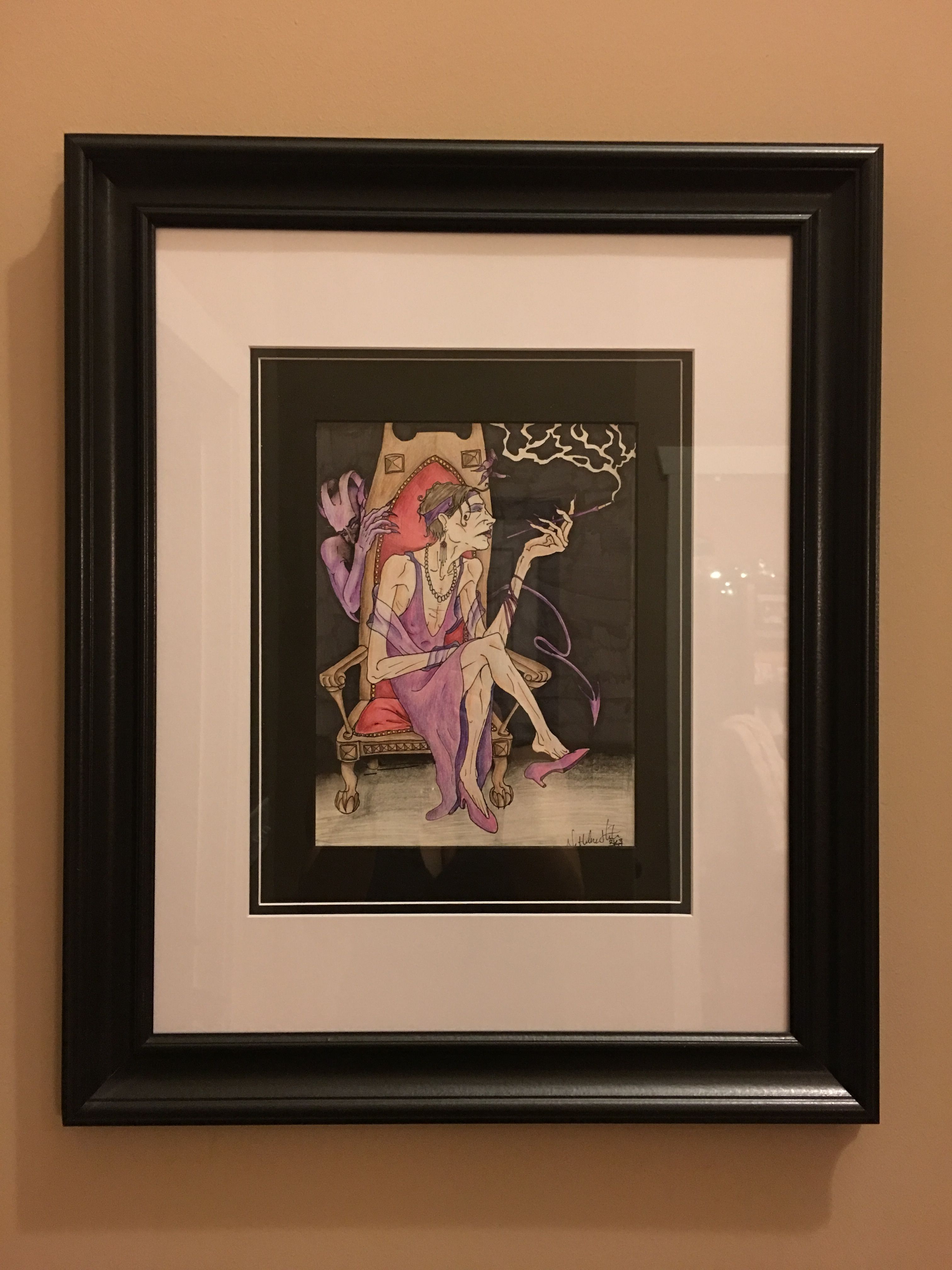 Here's the story I wrote, inspired by this muse...

"The Daemons of Life are Getting Old"

Amelia sat in the once plush armchair in the Grand Ballroom at the Plaza Hotel and took a leisurely drag on her cigarette. Smoking had been prohibited in here since 1987, but what difference did it make now? They were going to tear the hotel down any day… she'd smoke where she damn well pleased.

The hotel had been her home for more than half a century, not that it mattered to them. All they cared about was "progress" and how she was holding up "their plans for a parking structure".

She took another drag and slowly released the smoke between her pursed lips, watching it twirl and swirl towards the crystal chandeliers still hanging in the ceiling. She wondered why they'd not been removed and sold off with the other fixtures. Probably would've cost them too much she thought.

Still looking at the twinkling crystals, her mind began to wander back to the endless parties she'd been to here and the men that had courted her. She could still feel their embrace, holding her a little too tight and feel their breath on her cheek as they tried to steal a kiss. True, she'd led on more than one, but she was young and full of life.

She could hear the music, the laughter and, as if in a trance, rose from her chair and began to dance around the parquet floor one last time. Eyes closed, smiling, she moved as one with the imaginary beat.

From behind, she heard an unexpected sound that startled her back to reality, and, upon opening her eyes, caught a glimpse of her reflection in the gilded mirror behind the bar. Who was this wretch shrouded in purple silk looking back at her? What had happened to the once tall, elegant debutant, the socialite? What had happened to the woman men wanted, and the women wanted to be?

She adjusted her pearls and made her way to the foyer and marveled at its grandeur. In her mind's eye, she pictured the priceless paintings which once hung there… Picasso, Dali, Monet… and marveled at their beauty.

As she reached the bottom of the grand staircase, she could feel his presence and without looking, reached out and took his hand. His icy grip closing around hers.

The daemon had come, and she was ready for him.

Thank you @derosnec for parting with her ♡

I like all the content you have published because it is truly an art and support everything related to it, my art is related to the drawing on portraits but I admire that type of art. redwellies

It looks super cool in the frame @redwellies

The extraordinary topic @redwellies, seen from the topic alone has uploaded our hearts to open as well as read your post, interesting also when I opened it, it turns out there is a series of art form complete with terms based on the visual art image, stunning @redwellies, which is very precise in this moment, extraordinary.

Ahhh I love the frame!!!!! :D She is officially official now <3 I'm glad she's finally got a better view than the inside of a sketchbook, lol!

i lov Vikings and obvioulsy Lagertha you took all my attention with that "start" :)

i like Amelia and Loki behind the chair! haha

Kinda reminds me of Ms Havisham in Great Expectations with that cigarette.