hello esteemains!! this is my oil painting came from inspiration of Bob Ross painting :)

here is something about him in case you never heard of him.
''Bob Ross, the painter and television personality, was a prolific artist who purportedly completed 30,000 paintings during his lifetime. Bob Ross wanted everyone to believe that they could be artists. While some may not like Bob Ross’ paintings, there are very few people who dislike the artist.

Robert (Bob) Norman Ross was born in Daytona Beach, Florida on October 29, 1942 to Jack and Ollie Ross. Bob Ross’ father was a carpenter and builder. For a time, Bob worked with his father doing carpentry. From his mother, Ollie, Bob learned a love and respect of wildlife '' 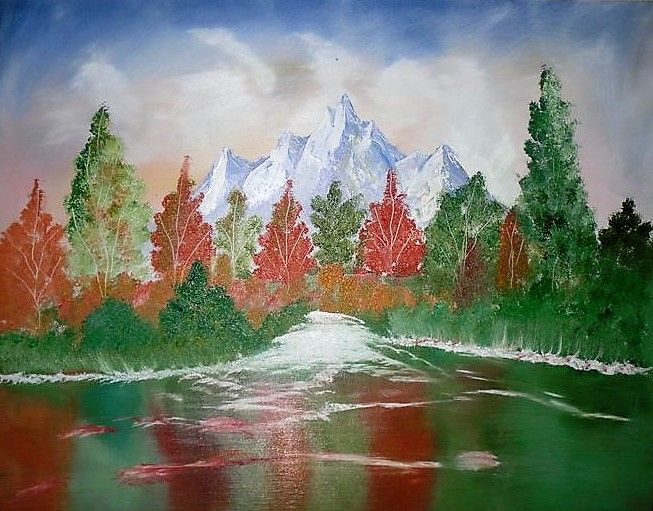 This is so amazing friend! it took me on a bit of a journey in my mind, to a very beautiful place! thanks for the background story on Bob it is the 1st I hear of him! but having checked out some of his art right now i find it to be very special how you have managed to capture that very same "whisk you away on a dreaming journey" feeling that his art gives, in your own way.

Always enjoy seeing your work!
thank you for sharing! :-)

@liomom thank you so much im glad you like it!! i learn a lot from his techniques, his art work looks so real.
im really happy you enjoying my work as an artist this is the best reward :))

I have to admit you and Bob have me all inspired to pick up a paint brush and paint again! something I have not felt the calling for in a very long time! thank you so much for sharing your beautiful art with us and the wonderful light and energy that came with that beauty!

@souldelas hello friend!! i appreciate your support :) thank you

This post has received a 0.89 % upvote from @booster thanks to: @expressionism.