Confession Of A Suzuki Hoarder

beckymeep (51)in #automotive • 4 years ago (edited)
Hi Everyone.
When you think of a girls collection, its usually a shoe collection or handbags. Not Me though, I collect Suzuki 4X4 vehicles! It all started when talking with @CSUSBgeochem1 about what second hand car I wanted to buy to replace my Dodge Dart Aero (I was selling it as then I could pay off my finance finally, and actually Own my vehicle again). Being a self trained mechanic he suggested an older car that he could work on for me, to save costs from garages fixing any issues.
I told him how I missed having a 4 wheel drive, as I had owned a Ford Explorer before my Dodge Dart, but I wanted a smaller SUV then that, as it was just to big for my needs. Straight away he suggested a Suzuki Samurai. I had not heard of this vehicle before, so started asking questions. 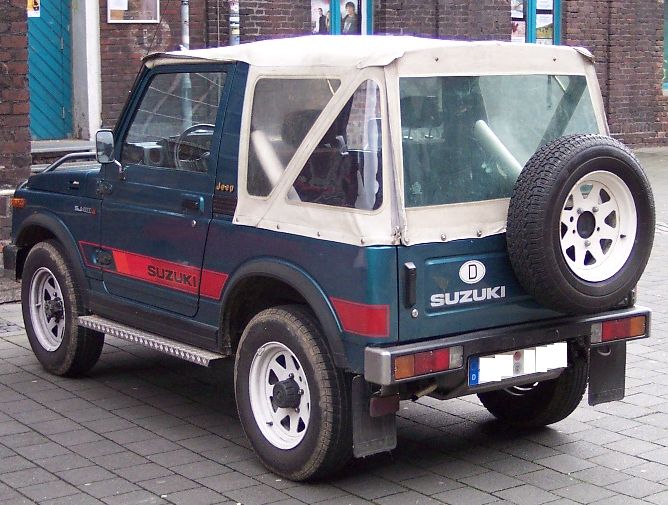 At first I dismissed this model as google had brought up a load of soft top 2 seat versions.
I thought "This is useless to me as I want to transport my 2 dogs around in my vehicle", and I had a friend who owned a soft top Jeep who had told me the complaints from noise, to leaks when it rains and not to mention how cold they could get. Although I did note how cute and compact they were. I decided on a Toyota Rav4!
While shopping around the second hand ads, I found myself still checking the prices for the Sammy's. And to my complete surprise I saw an ad for a Hard Top version with Backseats, being sold in Riverside CA! Well this changed it all!
I started researching Samurai's and discovered the TinTop (as it was called) was the rarer version, so usually hard to find one in good condition for under $3,000. I also discovered these models are now Classic Cars and people are restoring them, rather than making rock crawlers out of them. With good reported gas mileage, and a cheap insurance quote from my provider, I decided this was the car for me!
For some history on the Samurai, please click here to be redirected
I told @CSUSBgeochem1 about my find and he was blow away, he didn't know about the Classic Car rating for them, but started telling me how long it would take to find the model I wanted for the price range I had. I was puzzled as I had already found one in Riverside for just under $2000. I showed him the ad and he quickly got on the phone to the seller asking questions and setting up for a viewing & test drive.

Even though his front end was, well missing. The drivers fender was smashed, there was a weird 'ram bar' attached where the front bumper should be, and there was neon crayon melted over the backseats....it was love at first sight! He was so small on the outside, but surprisingly spacious inside. Buddy also fell in love immediately. He even took to sleeping in Norman the first couple of week I had him. 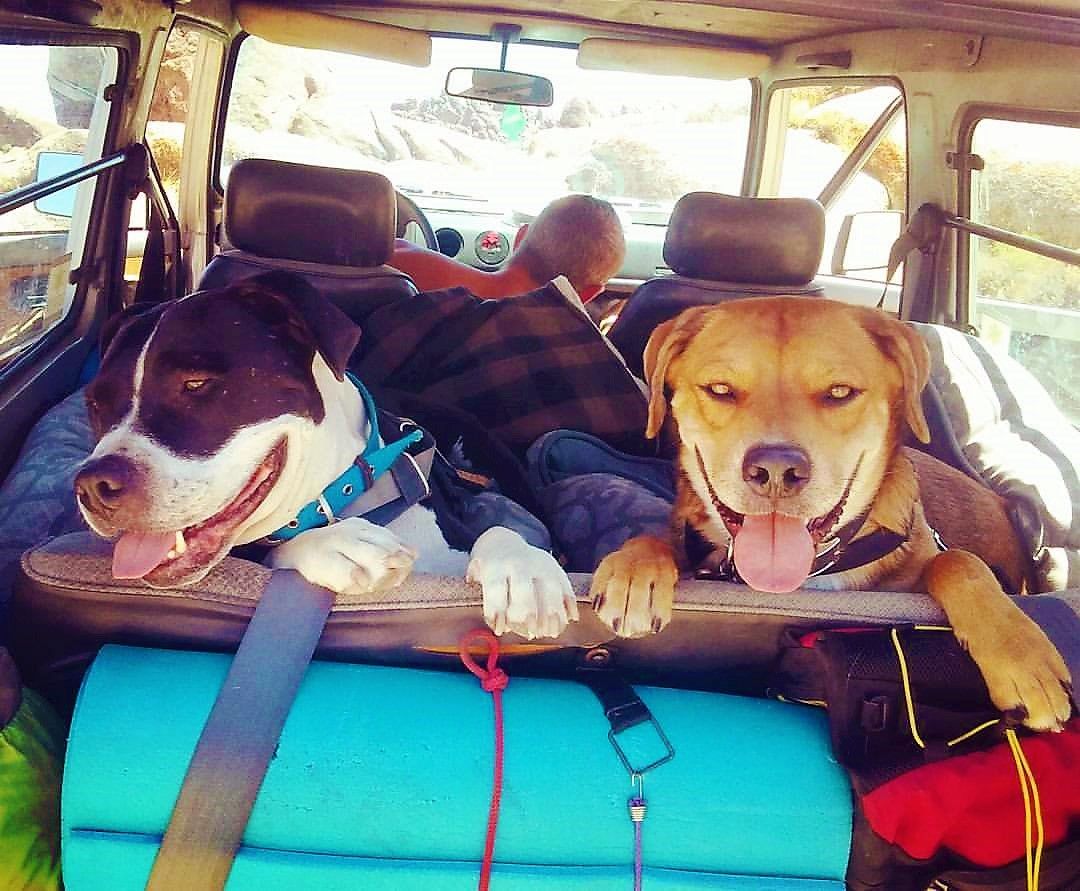 I wont list everything we replaced, as the list is way too long! But here are the before and after shots. I was still trying to source a grill that would fit at the time this photo was taken: 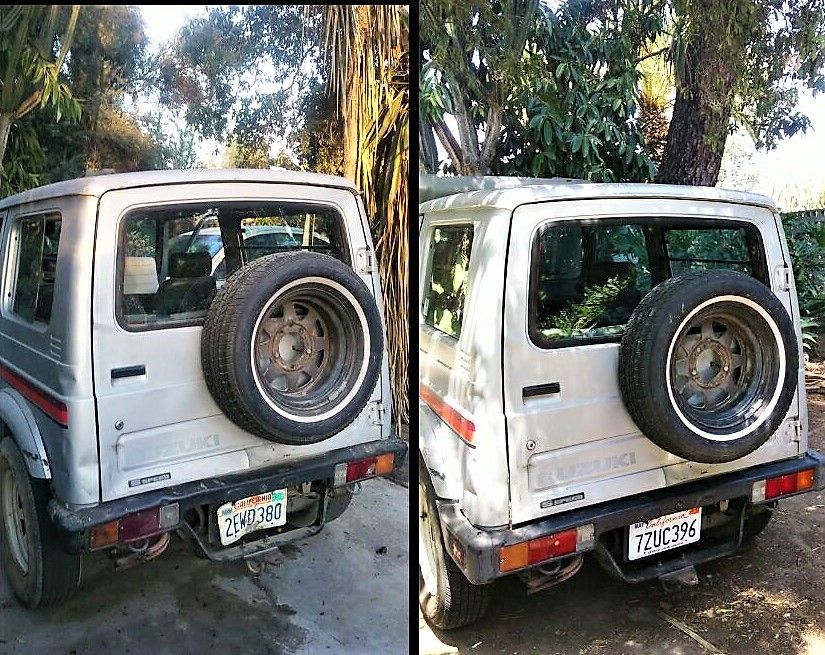 Even though he is a Tiny 1987 carbureted SUV, he has took us to many places. Here Norman is with a modern Ford F-150 for a size comparison: We have been all over in Norman!
Idaho: 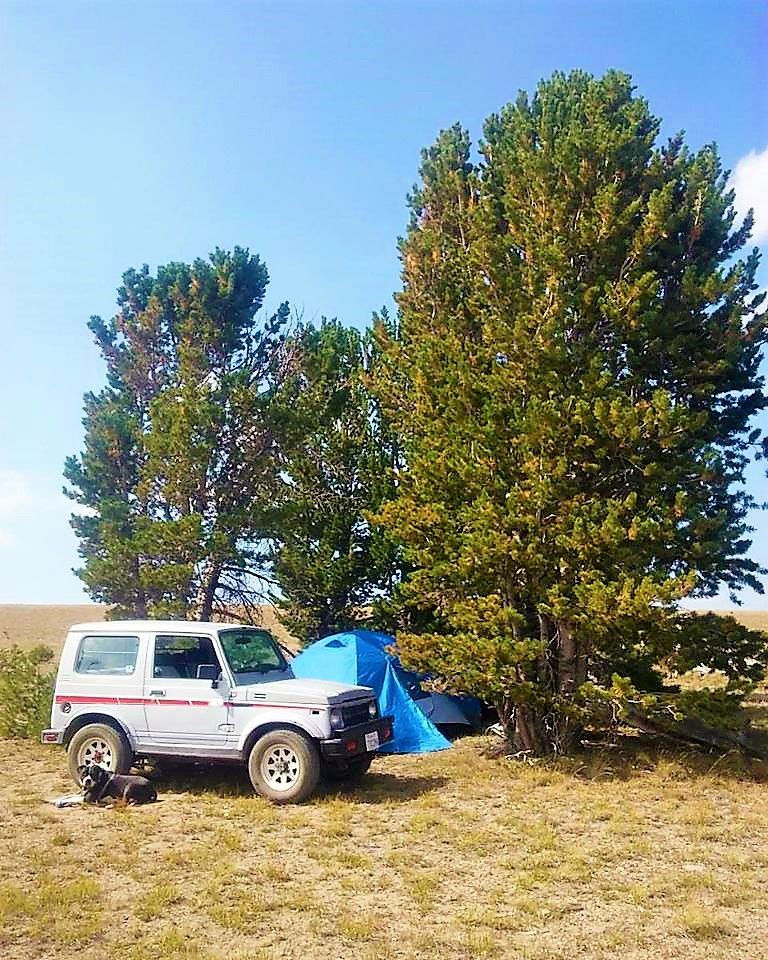 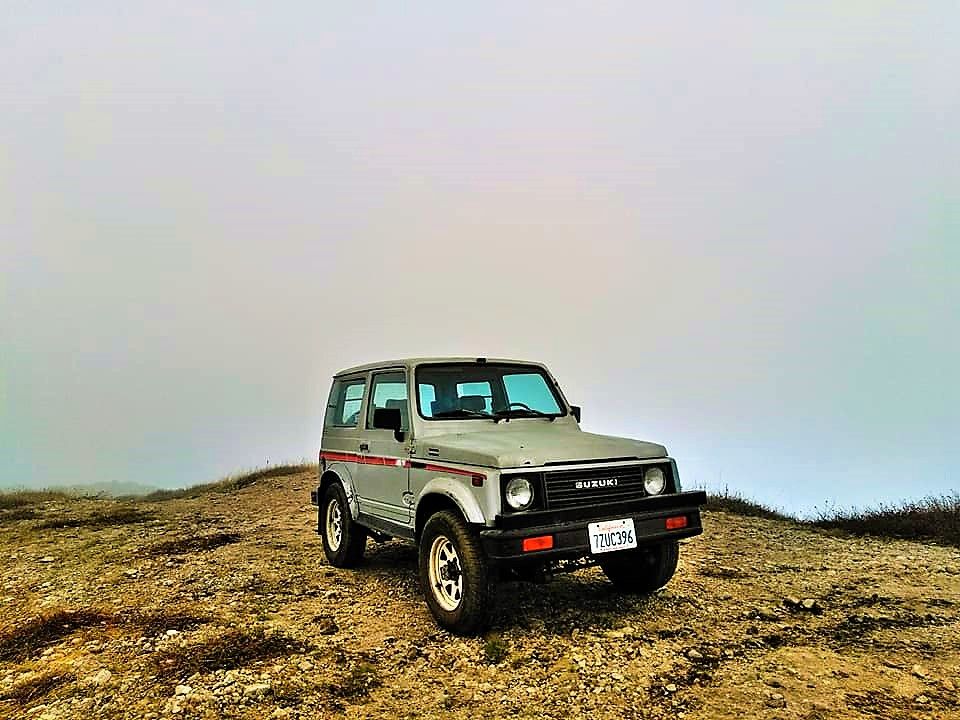 On our way to Idaho to watch the Solar Eclipse in 2017, a lorry illegally over took us in a work zone peddle dashing the entire drivers side of little Norman! He windows have cracks in them and so does his paint work. I was fuming!! Its probably a good job we didn't catch up to him else this story would have had a very different end.
We carried on to Idaho and made it up to one of the highest peaks to watch the eclipse.
But after all the hard work and money we'd put in to restore Norman, this had upset me, as he was now damaged!
Here Norman is after we had restored him:

But I didn't want to use Norman on long journeys now, I didn't want him injured/damaged again. When I brought him I had said I'd buy another car for my daily drive and keep Norman for the weekend warrior. The time to get a daily drive
had come. 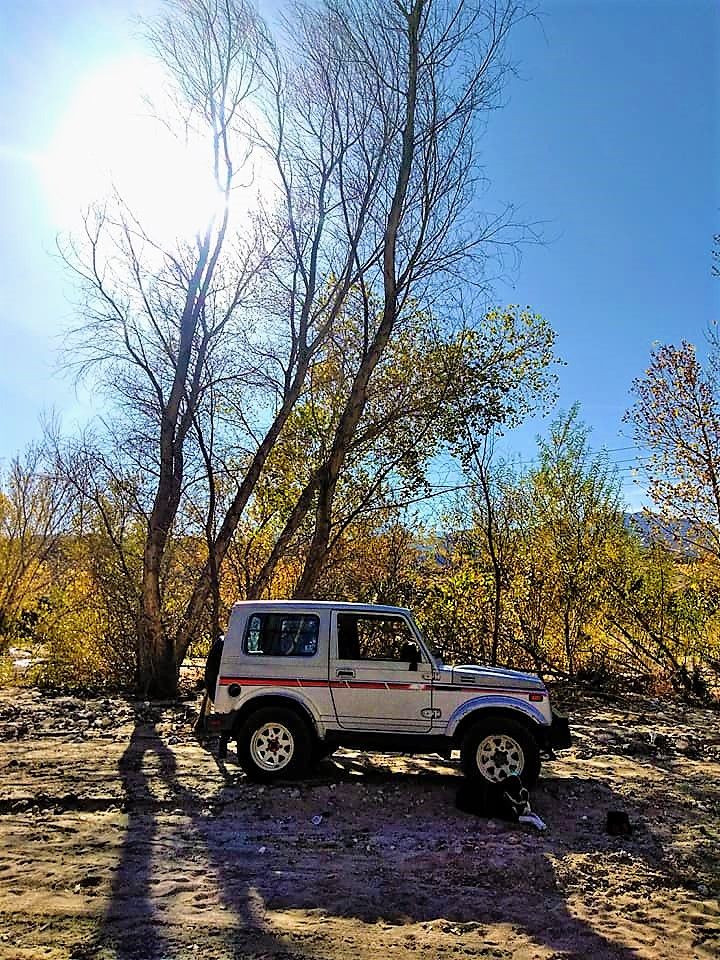 I loved Norman so much and he was so well made, that I decided to stick with the successful Suzuki brand. I now researched Sidekicks and Trackers. I wanted something a bit bigger and more luxurious, so I decided on a 4 door Suzuki Sidekick. Power everything, (windows, steering, mirrors) airbags and AC.
Click here to be redirected to learn more about the Sidekicks history.
I didn't have much left for a budget, but figured there was no harm in looking around till something I liked came up in my price range.
I saw 2 I could afford, but alas, when contacting the sellers both had already been sold.
Keep looking!
I looked for about another week or two, with no luck. I gave up and accepted the fact I'd need a min of $3000 to buy one.
About a week went by, when for some reason that I do not know, I felt compelled to look at craigslist again. This was odd as I'd stopped searching craigslist a few weeks before, as all the ads were old, so either sold or no response to enquiries.
To my shock there was a white 4 door Sidekick within my budget! I jumped on my phone to ask if it was still available and what the ad meant by power issues. The seller replied letting me know his mechanic said it was possibly a blocked catalytic converter, that was causing the issue, but he had no idea, and was selling the car 'As Is'. We arranged to go look at the vehicle the next day, as @CSUSBgeochem1 said no matter what the problem, within time, he would fix it. We drove Sydney home that day and found some surprises on her.
First; she has a 2 inch lift
Second; the factory alarm still worked
Third; there were breather tubes to allow for deep water crossings. What a bargain!!
Here are both Sydney and Norman, you can see Syd is a little larger in size having the 4 doors: 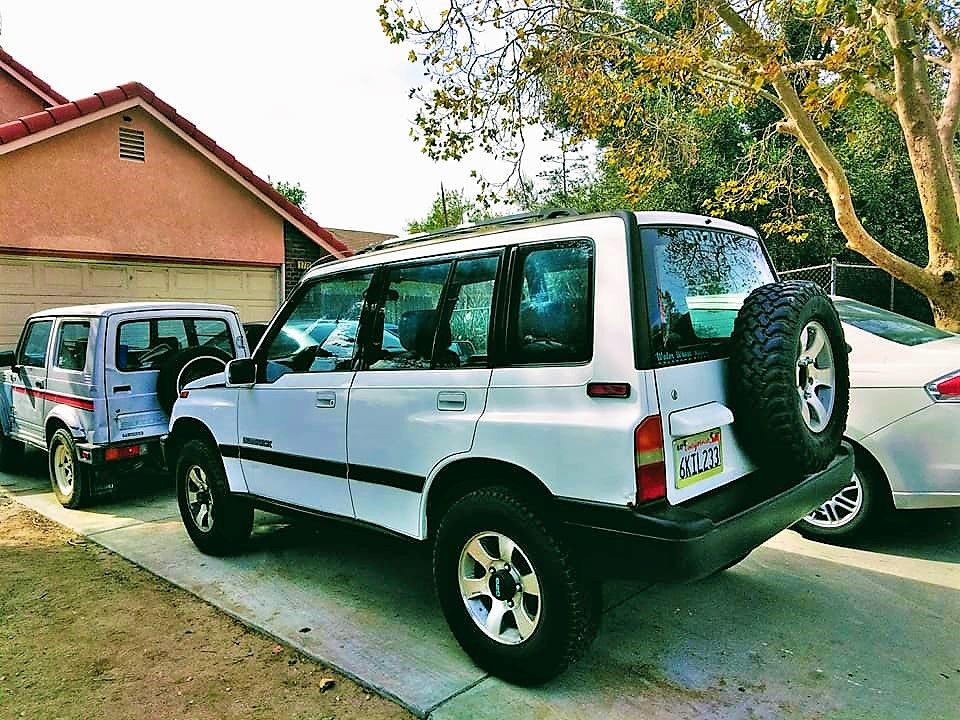 Long story short, a few months of trail and error and @CSUSBgeochem1 found the faults; crack in tubing on fuel pump delivery system, missed timing, crack on manifold, new catalytic converter to name a few.
But the best news was through all his hard work, Sydney passed her smog test with flying colors! That's when we took her off for her first camping trip. It was during this trip we both fell in love with Syd. She is so comfortable and roomy! And as she came with the roof rack support beams, I was able to buy a car topper bag, for extra storage. I also had to buy a dog ramp as Buddy was having to much trouble getting in the vehicle. 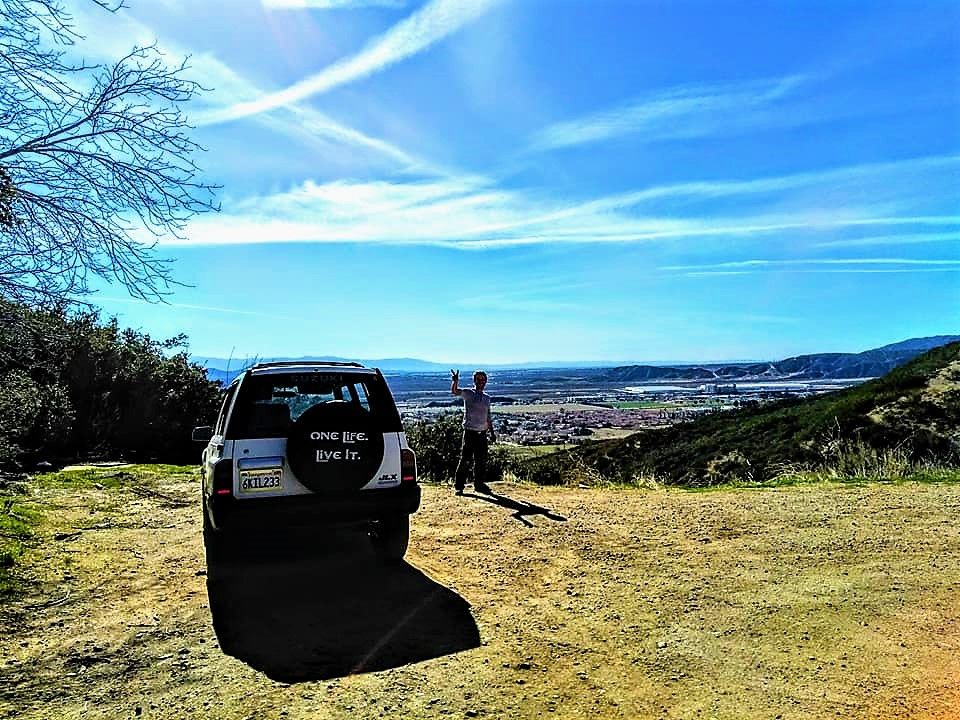 We did a couple of shorter trial trips in Syd to let the dogs have some freedom, and test for other issues that needed to be fixed. Then we took her out for a proper test drive: After two trips along the trails, second harder than the first, we knew Sydney was now all fixed and ready to be enjoyed!
So as I write this we are planning a week long road trip up through CA and in to Oregon for this month. And a road trip through Colorado in the Summer.

This is the reason I wanted an off road vehicle again, the FREEDOM to travel and explore!

Thanks for reading. If you liked my post, please remember to upvote it, resteem it and follow me so you don't miss out on my future content.

All photographs are the property of @beckymeep, unless stated underneath the image.

Great adventure post. The adventure of buying Norman and taking a trip then looking and purchasing Sidney.🐓🐓

Thanks for the comment and upvote :)
Yes, somehow I managed to stumble on what I wanted, and at a price I could afford (only as I'm lucky enough to have a talented boyfriend who works on them for me) It was somewhat an adventure just finding all the parts for Norman. As both these cars are rare, so parts are hard to source at times.

We have had many adventures in Norman, Sydney's are still to come now which I'm very excited for!

They are! Both love going on an adventure, anywhere they can run around free, they love.

your samurai is super cool!!! i love him too. :D

Thanks, Norman is a heart throb :P I'm saving right now for the next upgrades for him so we can start driving him again off road

I gotta try this off road thing...