Bangladesh's first communication satellite 'Bangabandhu-1' has been launched in Bangladesh on Saturday at 2:14 am. From the Kennedy Space Center in Florida, the US company started its journey to orbit with the latest Rocket Falcon-9 satellite of SpacesX. State Minister for Information and Communication Technology Zunaed Ahmed Palak was present there. He confirmed the matter to BBC Bangla, "The satellite has been successfully launched and sent a signal to the ground."

The satellite is visible in the transparent sky of Florida for about seven minutes.

State Minister for ICT related issues Junaid Ahmed Palak said, "Bangabandhu-1 is a timely initiative of Prime Minister Sheikh Hasina, which has a vision to build digital Bangladesh by 2021.

Many Bangladeshis living in different countries of the world also witnessed live broadcast and webcast of this satellite launch.

Earlier this morning, all the yazas to launch it were final but the process of launch was postponed in the last minute.

SPACEX says that many teams continue to work on launching it on Saturday. 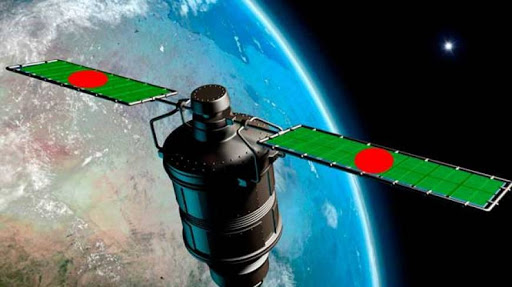 With the introduction of this satellite, Bangladesh has achieved the status of 57th country in the world of satellite satellites.

The satellite will enhance the country's ability to weather predictions and observations against natural disasters. The satellite can take advantage of the SAARC countries as well as a part of Indonesia, the Philippines, Myanmar, Tajikistan, Kyrgyzstan, Uzbekistan, Turkmenistan and Kazakhstan.

The satellite was initially scheduled to launch on December 16, 2017. But due to the cyclone, it was suspended for launch.

In November 2015, BTRC signed a $ 248 million agreement with France's Telen Elginia Space Facilities Company to build the first satellite in the country. The company was placed in France's Canaries warehouse a few months ago after the satellite was completed. Later on March 29, the satellite was transferred to Florida.

In order to launch the Bangabandhu-1 satellite, Bangladesh in January 2015 bought a slot orbit slot from Russia's satellite company Interuscriptnik for 119 million to 1.8 million dollars.

Congratulations! This post has been upvoted from the communal account, @minnowsupport, by najmul4 from the Minnow Support Project. It's a witness project run by aggroed, ausbitbank, teamsteem, theprophet0, someguy123, neoxian, followbtcnews, and netuoso. The goal is to help Steemit grow by supporting Minnows. Please find us at the Peace, Abundance, and Liberty Network (PALnet) Discord Channel. It's a completely public and open space to all members of the Steemit community who voluntarily choose to be there.

Congratulations @najmul4! You have completed some achievement on Steemit and have been rewarded with new badge(s) :

Nice post ! You got 12.95% upvote from @flymehigh. Earn free sbd/steem daily by delegating(renting) your SP. We share high return, click here to delegate your sp to flymehigh if you don't know, how to earn passive income by delegating your SP click here for more info Join our discord You can promote your posts. Thanks.

You got a 7.14% upvote from @redlambo courtesy of @najmul4! Make sure to use tag #redlambo to be considered for the curation post!