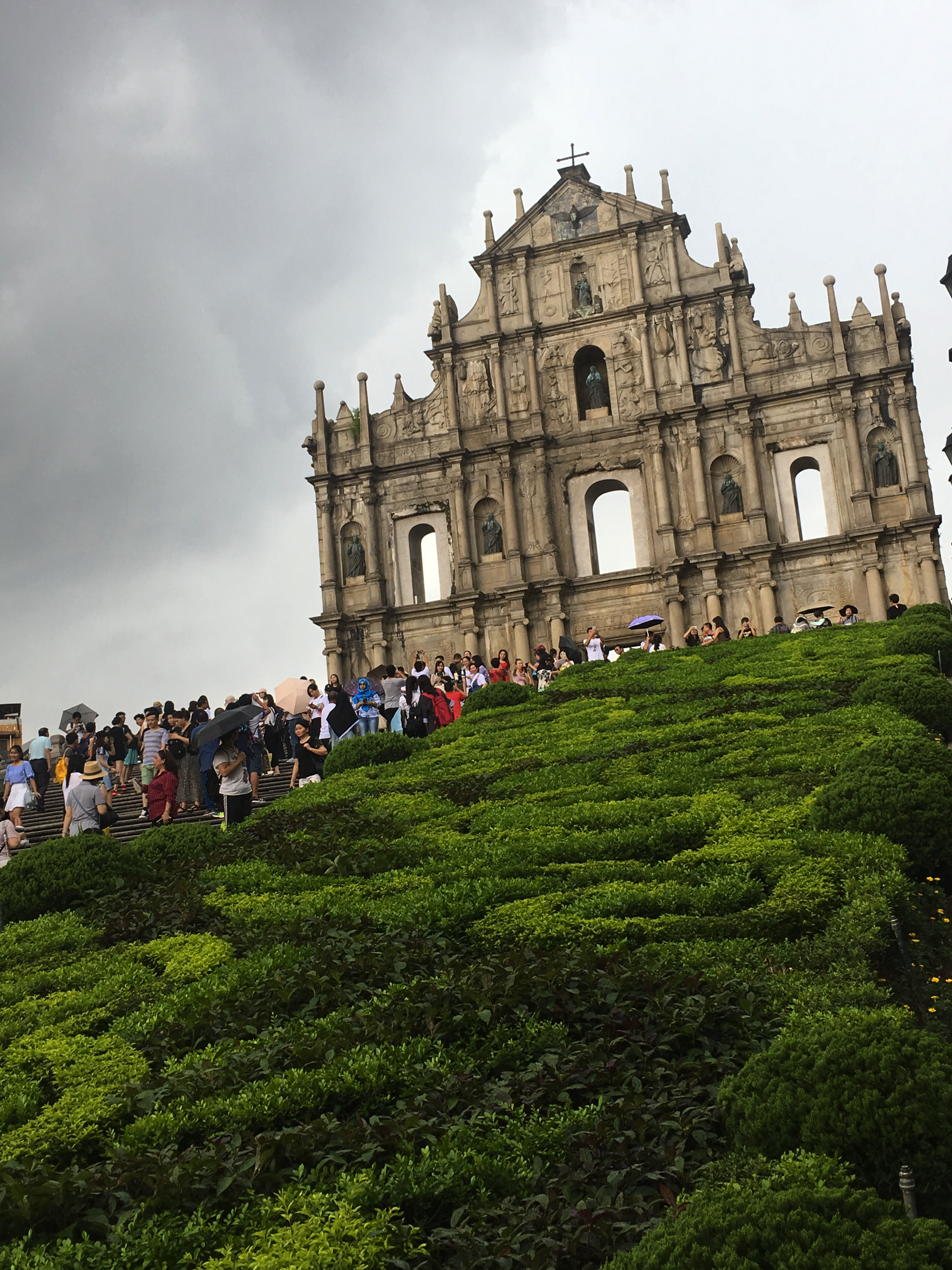 One benefit of living in Shenzhen is that it's very easy to travel to many places in South Asia that are beautiful and rich in history. For example, this Sunday we hopped on a boat from the local port(40usd per ticket) and an hour later we're in Macau, the gambling capital of the world. View from atop Macau Tower

This quick trip was not to hit the craps table though, we just walked around and saw some sights.

The top pic is the most famous historical site in Macau, the ruins of St. Paul's Church. It was built in the late 16th century by Portuguese Missionaries. They were kicked out in the 1700s and it was used as a military fort, burned, and now it's a museum. All that's left is that beautiful facade, and then behind it they have glassed in the ruins of some of the walls and crypts, with a few artifacts. 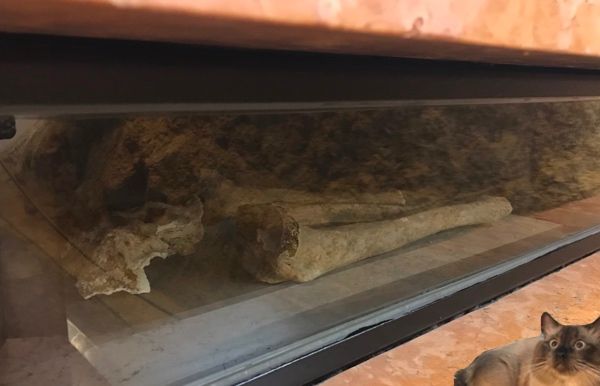 Now I should provide some basic history of Macau. It's an ancient port, much like Hong Kong, and very close to Hong Kong. Interestingly, like Hong Kong, Macau was technically a European Colony until 1999. From the mid- 1500's to 1999 it was a Portuguese Colony. It was the very last instance of European Colonialism in Asia. Macau traditionally was an important port city, but more recently gambling has taken over. Starting in the 1960s, gambling in Macau has grown to the largest casino operations in the world, bigger and richer than Las Vegas. The Chinese love to gamble and there are a lot of them. But our trip wasn't about that aspect of Macau, it was about the other side of the city, the 500 years of portuguese/southern china history. The signs of that history are visible everywhere in Macau, in and out of the casino district. Macau is two islands north and south, only about 11 square miles, and a population of about a million people, making it technically the most densely populated region in the world. It didn't feel that way though; to me Hong Kong TST and Central feels more cramped. The city is very similar to Hong Kong though, except while Hong Kong has a good bit of British architecture, it's more spread out and also modern. Macau is full of hundreds year old Portuguese architecture, mixed with a modern chinese city, making it a very unique place.

One place I'd compare it to is Hanoi, where you can see the Vietnamese style mixed with hundreds year old French architecture. 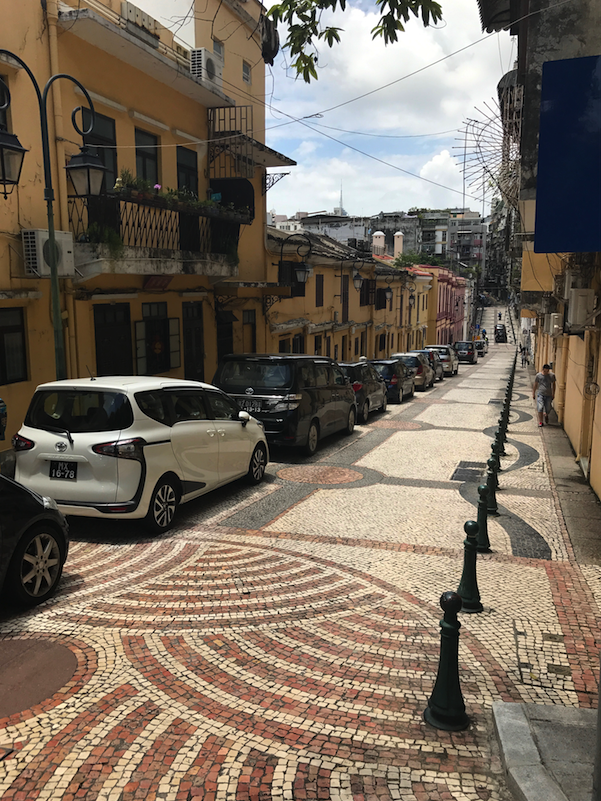 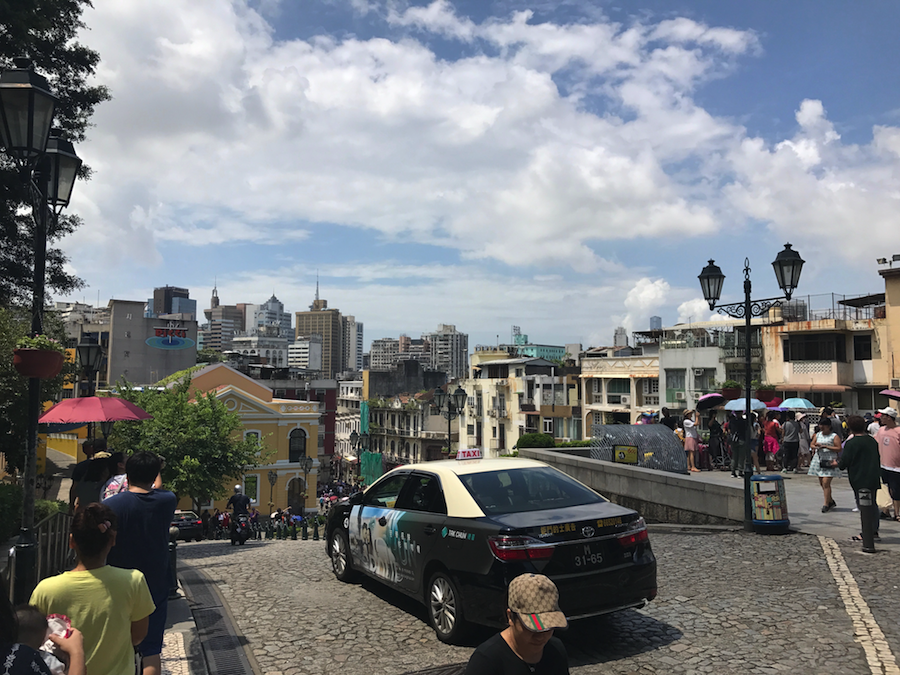 Macau Museum was very interesting. Built on top of the big 1500s fort on the main island, had a lot of ancient Chinese artifacts as well as from Macau itself. 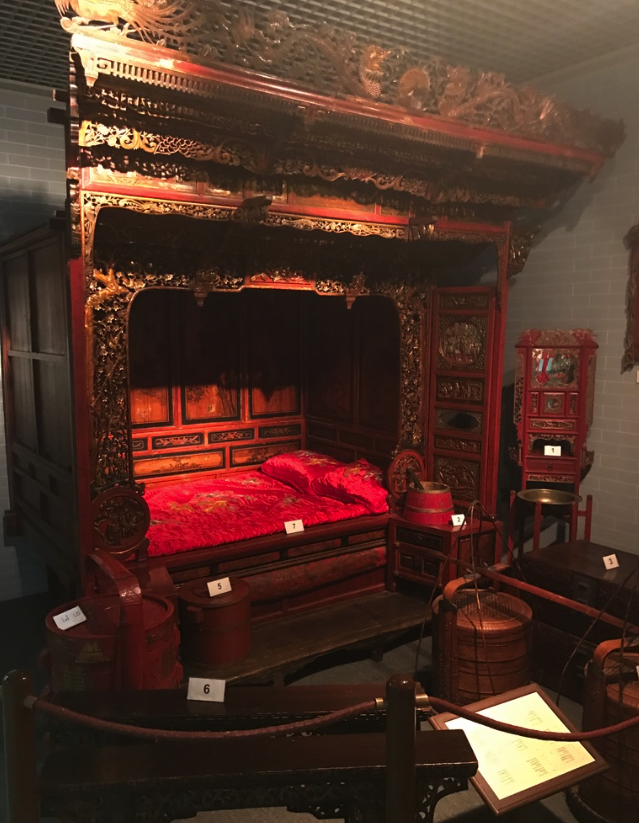 Where some 300 year old magic happened 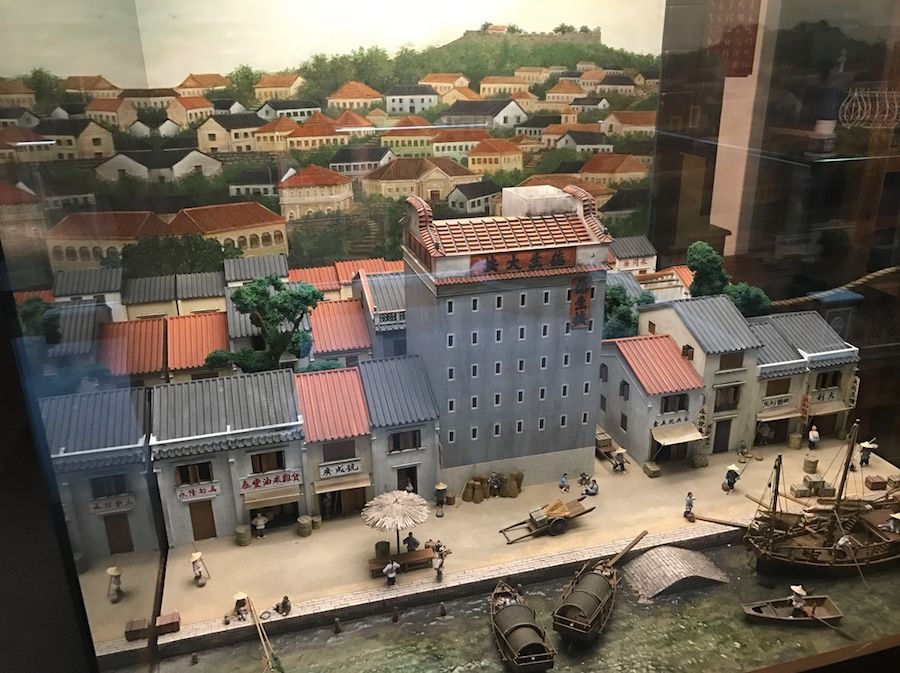 A model of Macau 100 years ago 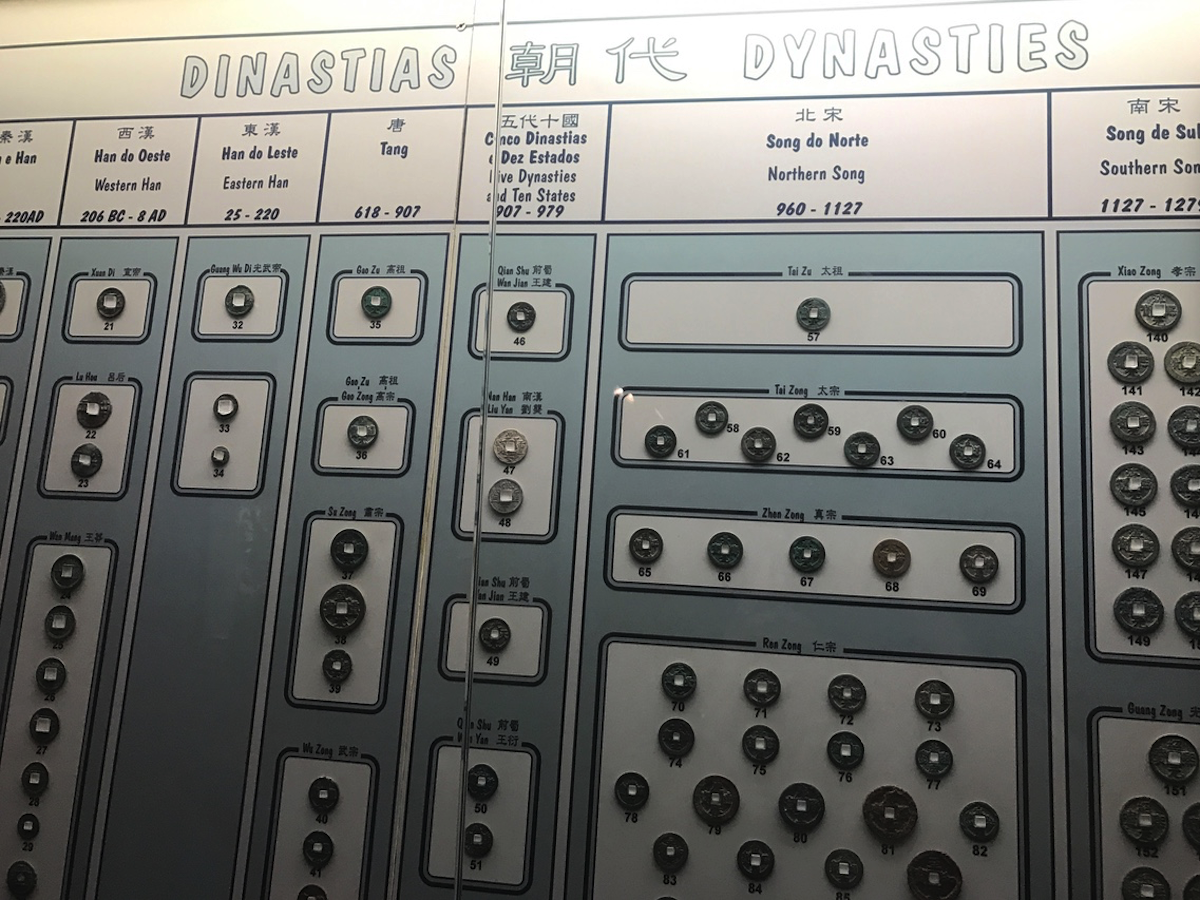 This was really interesting. I'm studying ancient chinese history so it was very cool to see the money laid out like this by dynasty and emporer.

After the museum we walked to the Macau Tower, the tallest structure there. Here are some street shots and an old church with cemetery. 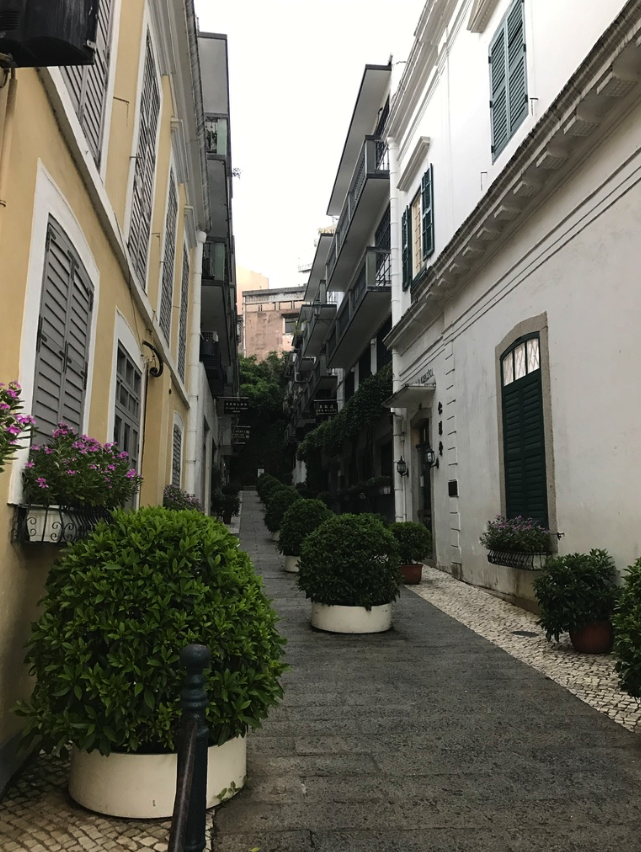 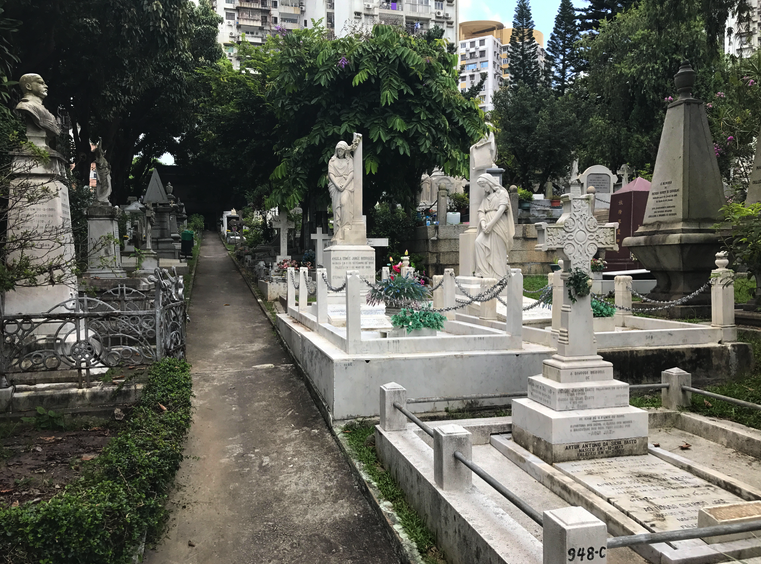 The Macau tower has the world's longest bungee jump - 700feet. I decided I should do it on my 40th birthday. I did a 400ft jump in college and in a way it was more thrilling than sky diving. They also have a "sky walk" as pictured below, you can go out outside the observation deck and walk around, we were getting a little rain at that point. That's all folks! Hope it inspires you to put Macau on your list of travel destinations. For a nice, cost efficient asian vacation I'd recommend putting in a list with these other closeby cities to save on airfare: Hong Kong, Singapore, Hanoi, Saigon, Kuala Lumpur, Bangkok.

Wow mate! Looks like you had a really good day trip. I saw what you did there with the kitty! Liked that. Awesome post!

Wow these is really lovely information I ever heard about Macau, now I fell. I'm in love with the city and how I wish God grant me the permission to visit that place some day.

I hope you can make it there

The latter pictures do look very similar to Hanoi. Macau looks like a nice place to visit. I sometimes wish Japan were a little closer to the rest of Asia for traveling purposes.

You should join #culturevulture challenge, if you haven't already.

thanks, I'll check it out. I agree about Japan, the flight is just a little long and expensive to Tokyo. I've been a few times and enjoyed it, I'd like to go more often. My wife speaks fluent Japanese and recently started a job managing Japanese accounts, so I may have a reason to go again soon :-)

When I first came here I thought I'd be able to go to China so easily, but it hasn't worked out. There are a lot of reasonable tours to Taiwan from here but the mainland is a little expensive, like you said, and getting a visa is a little complicated. I don't live near an embassy, so it involves a lot of extra travel just for that.

Have not been to Macau for several years. I heard the scenes have change much though many things are still the same.

For anyone living in south asia, I think it's a great getaway for a few days. A lot of different kinds of things to do there.

Either you are exaggerating or you are staying very high up.

that's it on the left. just the new territories, but it still counts ;-)

I have found a blog on Macau that i think is really good, so i thought I would look for other Macau related blogs and found yours - maybe it will bring back some memories for you?

If you have time for a look, i'm sure the author would appreciate it!

Thanks, I'll take a look. EDIT, looks like you're also an expat(brexpat)? If so, I'm starting a Discord channel for steemit expats, kind of a networking support group kind of idea. interested?

Indeed I am and yes of course! Networking/groups/communities seems to be of benefit here. Let me know if I can help 😁👍🏾

Edit: Do you have a tag in mind? #steemit-expats or something? cheers!

didn't have a tag in mind yet, but if it develops into a good group should do something like that. here's the discord link: https://discord.gg/EdemVB

Is a profile that promotes authors in the Portuguese language and also the geography where they live.

Congratulations! This post has been upvoted from the communal account, @minnowsupport, by cryptastic from the Minnow Support Project. It's a witness project run by aggroed, ausbitbank, teamsteem, theprophet0, and someguy123. The goal is to help Steemit grow by supporting Minnows and creating a social network. Please find us in the Peace, Abundance, and Liberty Network (PALnet) Discord Channel. It's a completely public and open space to all members of the Steemit community who voluntarily choose to be there.

This post has received a 0.35 % upvote from @drotto thanks to: @banjo.

This post has received a 1.85 % upvote from @booster thanks to: @cryptastic.

Congratulations @cryptastic! You have completed some achievement on Steemit and have been rewarded with new badge(s) :

<3 Macau! Some of the best world food I've ever tried was in Macau.