What happens if instead of the common and delicious hops used to flavour beer nowadays you use herbs and spices?

The answer is that you get gruit beer. This is one of the beers I've sent @buzzbeergeek a while ago and he's going to review it soon. I'm really curious to see how he likes it, so head over to him and keep an eye out for it!

Gruit is the name given to the mixture of herbs used to flavour beer before hops became the big dog in the brewing game.

It was the dominant type of beer but this style has been on the decline for the last thousand years and some of the reasons for this are fascinating - think Game of Thrones style political battles that changed the course of history and beer with it.

Gruit beer is making a comeback to be fair, there are some craft brewers that have been doing these beers since the 90's and some new players that banded up together trying to raise awareness regarding these old traditional drinks; they've been trying to push February 1st as International Gruit Day.

I couldn't find a gruit beer around here so I set out to make my own. I'll be honest up front, technically mine is not a real gruit beer as I've used a beer kit as the base and it had some hops mixed in already but I did not add any after. I did choose the lightest and cleanest tasting beer kit I could find; it was a simple wheat beer that when brewed without any additions tastes wheaty but not exciting in any way. 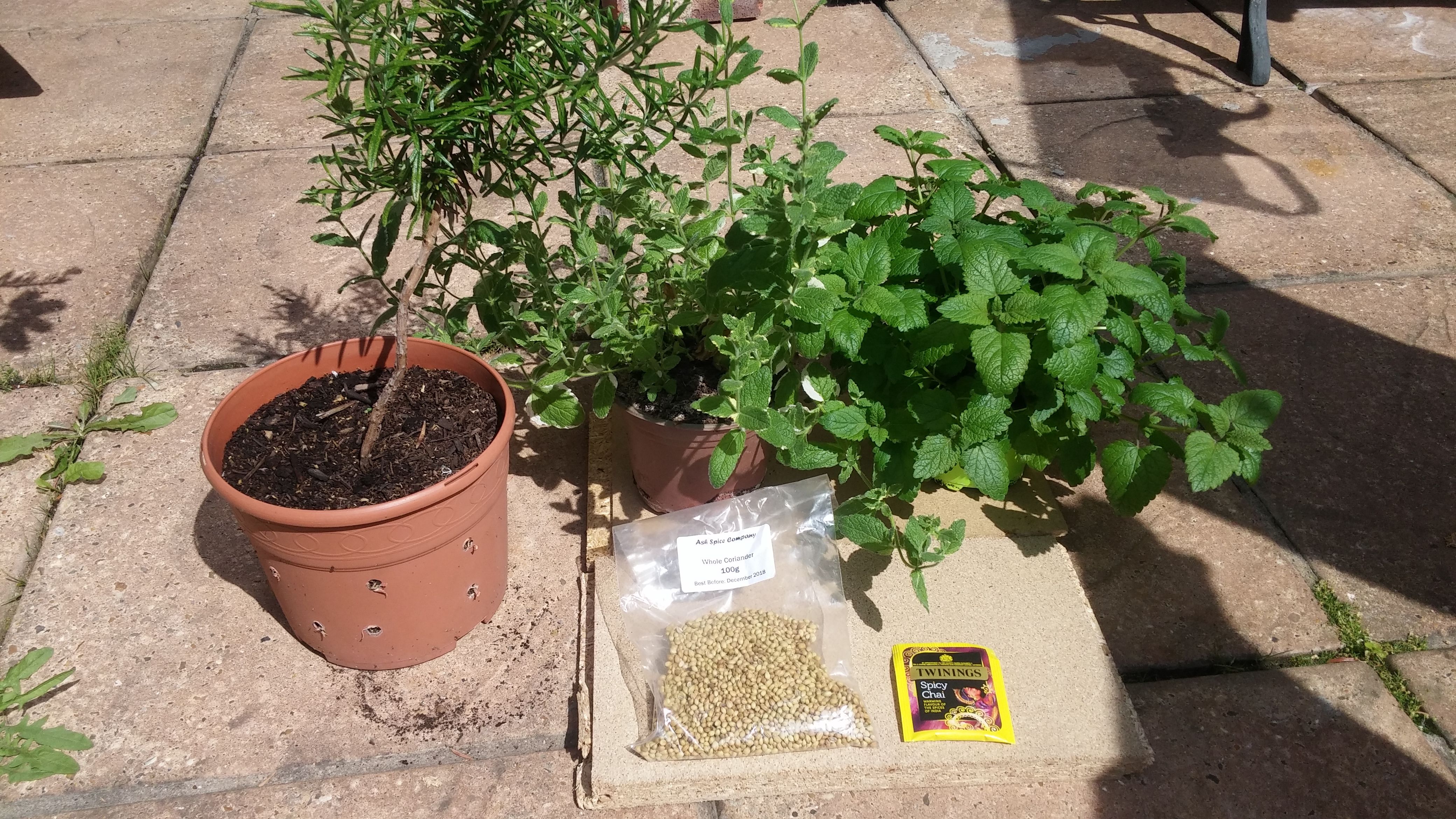 For the herbs and spices I've used rosemary, lemonbalm, pineapple mint, coriander seeds, orange zest and a little bag of indian spicy chai(this contains cinnamon, clove and ginger; and tea of course). I made a tea out of all these and added it to my beer at the end of fermentation instead of dryhopping. It is a beer that changes its taste every time I have it. When I tried it 2 weeks after bottling I thought I made a huge mistake. It had a smokey taste, like one of of those artificial smoke flavourings you can buy; I don't even think I finished that pint then.
At the 4 weeks point the smoke flavour was gone and replaced by a medical herbs type of taste. Some of my friends described it as a cough medicine flavour at that point and again I felt that this brew was a mistake, but I was getting some confidence because it was way better than 2 weeks earlier.

At the 6 weeks mark, it became a nice beer. Its clarity improved by a lot as well and my friends actually complimented me on it, they didn't really believe me when I told them it is the cough syrup beer.

It just turned 8 weeks old and it went a looong way from its early days. 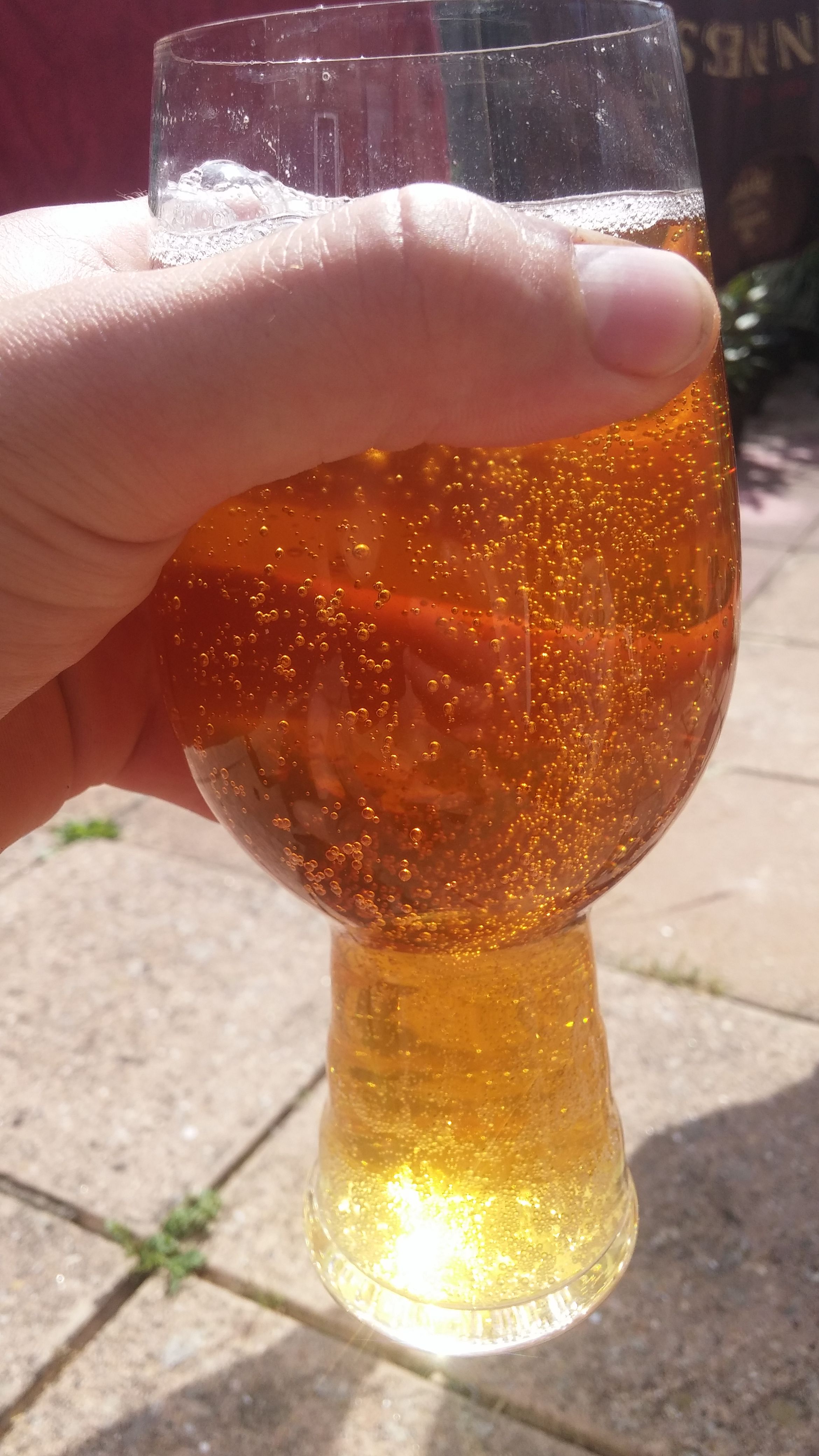 It's got a head that goes away pretty quickly, but the beer is not flat by any means.
The aroma and taste are difficult to describe; I get a rather strong floral aroma and something citrusy, I guess that's from the orange and lemonbalm. Taste wise the floral aroma is not as pronounced and I get notes similar to bergamot, maybe I'm thinking of that because of the tea I added. Also it makes me think of something meaty, but that's probably me associating rosemary with meats, hehe. The finish is a lingering spicy or peppery taste and it makes you want another sip/gulp.

The body is thinner than what I usually preffer but it's such an easy to drink beer that this is not an issue at all for me. I do like this beer quite a bit and in the future I will experiment with different herb combinations, yarrow is one of the classics, apparently you get a completely different kind of drunkenness from yarrow infused drinks (when researching gruit I found out that yarrow is a drug - so I guess I know why you'd get a different drunkenness).

That's if for the gruit for now.

Thanks for having a look at my beer experiments!

Congratulations! This post has been upvoted from the communal account, @minnowsupport, by Costopher from the Minnow Support Project. It's a witness project run by aggroed, ausbitbank, teamsteem, theprophet0, and someguy123. The goal is to help Steemit grow by supporting Minnows and creating a social network. Please find us in the Peace, Abundance, and Liberty Network (PALnet) Discord Channel. It's a completely public and open space to all members of the Steemit community who voluntarily choose to be there.

Thank you! Quite happy with how it turned out!

That's so cool - experimenting with herbs and beer. You're going to stumble across something game-changing, I know it!

I tasted it, check out my review if you want ;)

Cheers!
That would be amazing but people have been putting things in beer for 10000 years:) Who knows though, I might just find the equivalent of peanut butter and jelly in beer, hehe.