A team of Bank of America Merrill Lynch (BAML) researchers is arguing that bitcoin is one of the "greatest asset price bubbles in history."

In a note released Sunday, the team led by chief investment strategist Michael Hartnett went so far as to categorize the current market, which has seen a 60 percent correction so far in 2017, as a bubble that is already popping, Bloomberg reported.

The bank published a chart comparing bitcoin with famous financial manias: the Mississippi Company and South Sea Company in the 18th century, gold, the U.S. stock market in 1929 and the Dutch tulip bubble in 1637. 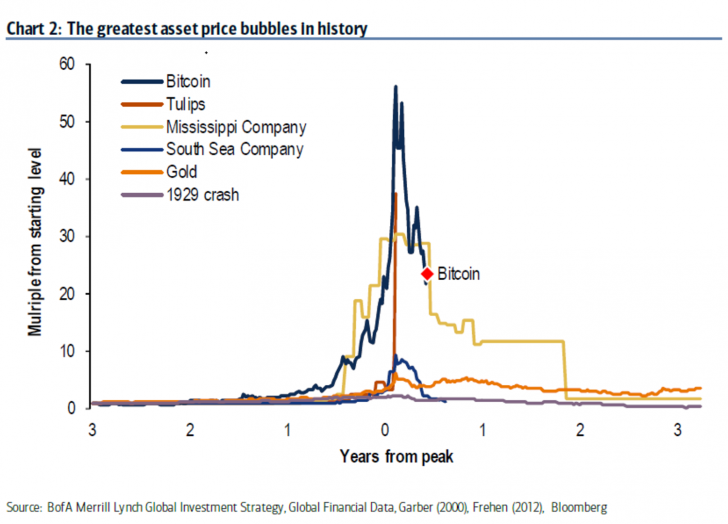 A published chart shows that the bitcoin bubble has the greatest asset price appreciation by a significant margin. At its peak, bitcoin's price was nearly 60 times what it had been three years before. Dutch tulip prices only rose by a factor of around 40, the researchers said.

BAML's chart shows the aftermath of famous historical bubbles as well as their run-up, indicating that once prices crash, they remain at their new, lower levels.

The same has not proved true of bitcoin so far, however. The recent bitcoin bubble is not history's - or event bitcoin's - greatest bubble. The price of bitcoin shot up 120-fold in 2010 and 2011, to around $11, before crashing. Its rise in 2013 and 2014 was also much steeper than the recent bull market.

The same factor complicates comparisons between bitcoin and the stock market. For example, in August 1929, the New York Stock Exchange's listings were worth well over $1 trillion, adjusted for inflation.

Hi @coininvest
Excellent article. I subscribed to your blog.
I will be grateful if you subscribe to my blog @dreladred
Good luck to you!