Bitcoin: Soros Says It's A Bubble

Here we go with more fake news from the mainstream media! This time it's #FakeNews Bloomberg reporting on George Soros in Davos, portraying him as a billionaire philanthropist and global humanitarian?😂 Who actually reads this tripe? Bear in mind, Bloomberg and the other esteemed financial news organizations are beholden to the globalist cause, and earn their revenue from the corrupt legacy financial industry. They are a part of the old world of fiat currency!

Of course they'll be FUDDING Bitcoin at every given opportunity! Bitcoin will totally destroy their corrupt old world financial system, where the globalist elite control all the levers. But I digress, so here's more fake news from Bloomberg, directly quoting the disingeneous George Soros on his thoughts and view on Bitcoin:

Cryptocurrencies are a bubble and aren’t stable stores of value, the legendary macro trader said in response to an audience question after his speech. But he doesn’t see them crashing because of their use by authoritarian regimes in the world.

“As long as you have dictatorships on the rise, you will have a different ending, because the rulers in those countries will turn to Bitcoin to build a nest egg abroad,” Soros said.

He was more positive about the blockchain technology behind Bitcoin, noting that his Open Society Foundations are using such technology to help migrants communicate with their families and keep their money safe.

Interestingly, part of what was said is in fact true. As any expert propagandist knows, a lie is always more believable when a little truth is mixed into the deception! The rest of this fake news article focusses on President Trump, again with a lie!

Here's George Soros, the man who uses his wealth to sow global disorder and chaos, depicting President Trump as a crazed dictator, who is on the brink of creating a global nuclear war. In actual fact, follow Trump's numerous acts - destroying ISIS, ending Middle East regimes funding of Muslim terrorism, securing borders and deporting MS13 drug cartel illegals, bringing about reunification of the two Korea's, and it's obvious that Trump's foreign policy achievements are in fact delivering world peace and prosperity!

The message here is simple, stop reading mainstream media junk! All they do is feed you lies from the devil! 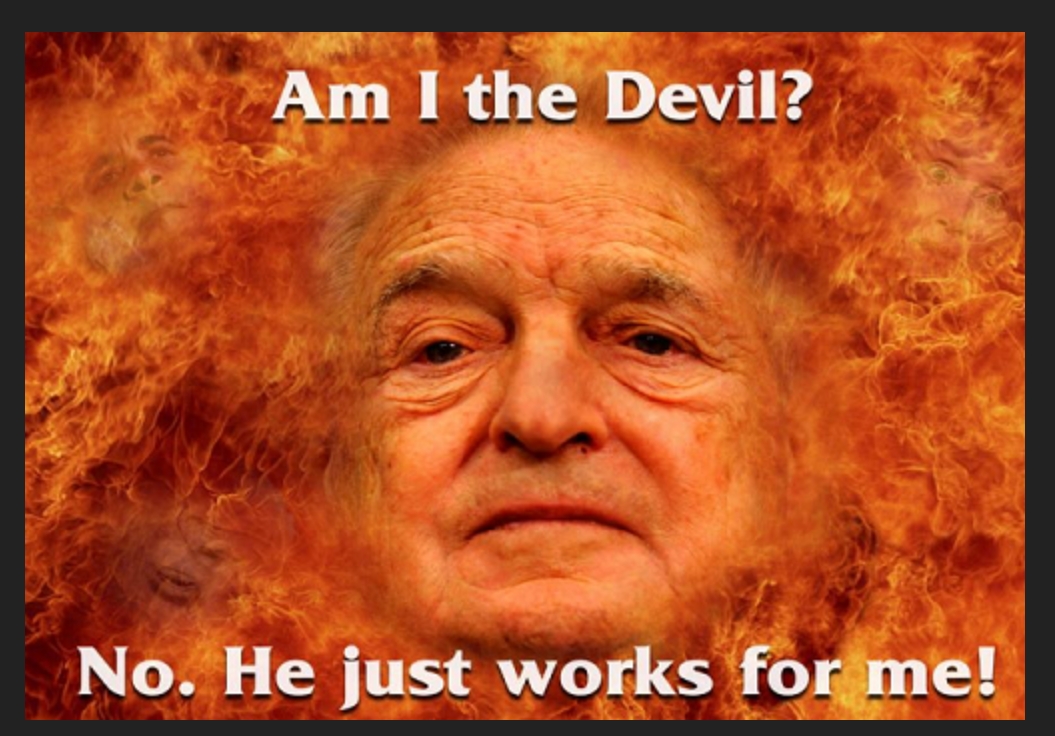 Yes, that's exactly how it is @blakemiles84!😉

Do the exact opposite to what these lying idiots say!👌

Soros is a cretinous globalist. It's become obvious they plan to co-opt the blockchain technology, much like they've co-opted every other earnest social movement in history.

Glad to see more people seeing through all the lies.👍

Soros and the likes are not at all pleased with the popularity of crypto currencies for a couple reasons. 1. It places wealth derived from fiat currency being exchanged or traded, however you like to label it, into another store of value that they cannot control to the degree that their control once was. Also in that equation is that people are trading their fiat currency and then hodling it rather than continuing the pattern of consuming. Which is also a threat to their system of control. Also included is the Blockchain technology which retains all transactions, and we all know how some people like to conveniently lose data at a time when its curiously convenient. Or delete said data at the same convenience. 2. It makes it much harder to suppress either nations who do not wish to be a part of the central Rothchild banking system, or participate in the use of the petro dollar. Also it provides a method of personal banking and wealth storage to the billions of people who are in countries that the central banks will not issue swift codes as well. Thus allowing global commerce to a large population that was under financial supression by the banksters. The pandoras box of Crypto has been opened, it cannot be closed, but there will be resistance by those who stand to lose power from it. We must unify as a people and we can come from beneath the thumb of the current financial system. More evidence of this paradigm shift can also be seen in banking establishments retaining gold and silver for customers refusing ,or making it very difficult for people to withdraw their property. They see it happening and they are doing all they can to stop it. The plain and simple is, now is the time to let go of the fake convenience of the banking system and be responsible for the storage and security of your own wealth. Look what has happened since we have left that in the hands of others...war, death, supression, starvation, seperatism, Fake food, even worse medicine, a corrupt justice system and all paid for by those not maintianing their own money.