EOS Analysis: Is the Bottom in? Check out this Blog!

The hurry up and wait syndrome has not left EOS untouched! Look how EOS quickly placed its impulse waves, circled blue i,ii,iii,iv,v. Then the requisite red a,b,c correction has been ensueing now for nearly FOUR months! How many have given up on EOS! How many have had just enough on EOS meandering and doing nothing on the price side but slowly, aganoizingly putting in incremental lower lows! A Technical Analyst feels such emotions but don't act on them! 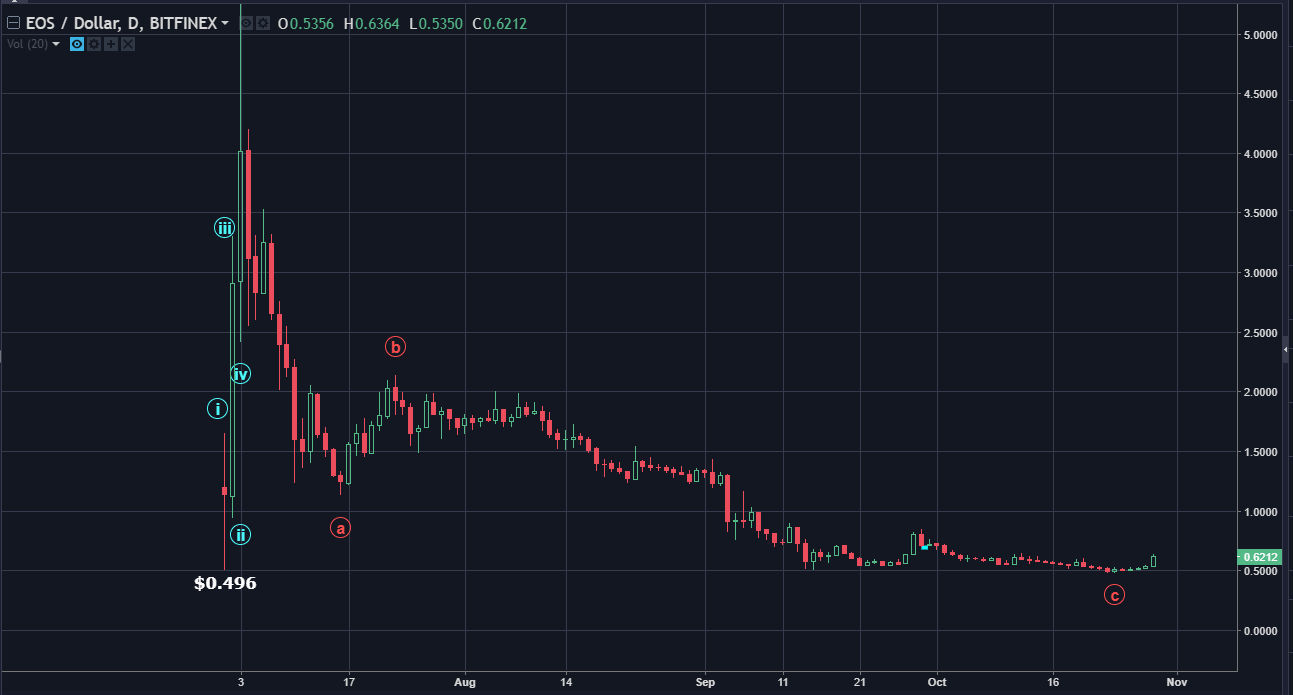 The below chart is a short term 15 minute time frame and an impulse has started. White roman numeral waves i, ii and iii are complete and now wave iv is in progress. As the sub waves of wave iii shows, its fifth wave was not extended, so a deep retracment is not expected. The blue waves are drawn to add sub waves for white wave v. So, let's see if wave v an complete! The video has much more details and scope! If this blog post has entertained or helped you to profit, please follow, upvote, resteem and/or consider buying me a beer:
BTC Wallet - 15ugC4U4k3qsxEXT5YF7ukz3pjtnw2im8B
ETH Wallet - 0x1Ab87962dD59BBfFe33819772C950F0B38554030
LTC Wallet - LefeWrQXumis3MzrsvxHWzpNBAAFDQbB66

Legal Mumbo Jumbo: This is only my opinion, make of it what you wish. What does this mean? It means it's not advice nor recommendation to either buy or sell anything! It's only meant for use as informative or entertainment purposes.**
#money #cryptocurrency #blockchain #eos
4 years ago in #bitcoin by haejin (86)
$12.35
95 votes
Reply 43

Can you chart it?

No, sorry cant chart it.

Emotionally it indeed wasnt the best past months for EOS holders...

From a Technical Analysis point of view, it was a corrective time.
I wish you MASSIVE profits!

Thank you @haejin! I am happy to support you, I think your work is fantastic, and I always keep an eye on your blog for trading ideas and to keep up to date with the market. Keep doing what you're doing, you're awesome! 🚀

Hi Adamantine, if there is an analysis you'd like on a crpypto, please don't hesitate to ask. Thanks for the upvotes!

Thanks for updating this!

Dan Larimer is a Genius. For those of you doubting this project, I would reccommend spending a couple hours watching recent videos of Dan Speak on youtube regarding this project. Also to note, he created STEEMIT and BTS. The dude is real deal. Once you listen to a presentation on EOS you will realize how truly flawed ETH is, and that EOS can actually make ETH better.

I agree, I can see Dan Larimer being the Linus Torvalds of crypto.

From my understanding Stan Larimer is not a programmer but the sales voice of EOS.
It Could be awhile before EOS takes off.....
Again, no working wallet yet but they are working on it.

Thanks for the analysis on this. I'm invested fairly heavily in this one already and looking for the bottom to buy more.

My best guess is that EOS will continue to drop in price due to the ICO not being completed, however I think in 2019 EOS will possibly take over ETH or race ahead, so buy periodically on dips and HODL.

Great... I believe the bottom is in ... it was an interesting week last week and we had a very close eye on this EOS. It was prone to break down (30c) and did not ... it appears to be consolidating probably for the next few months and will boom soon. I'm expecting a very nice December/January.

EOS will hurry the rise per the "hurry up and wait" crypto syndrome.

Your analysis is Almost like "pulling knowledge from the future' like a modern day 'Nostradamus' @daverex...... you are calling close to exact precision points I can say as much.

Hey Haejin, what’s the easiest way to buy EOS in US?

Thanks for the video. I just question the long ICO phase. I thought EOS has great potential, but the number of tokens is continually rising.

Once litt, nothing can stop a bull sentiment

Any idea why EOS is up in these times? Is that any kind of an indicator to something on a deeper level? Or would that be fundamental analysis :D

We shall be wealthy and healthy!

Great inDeeD that is a Good place to be , huge upside, low downside.

great position for a long haul! :)

i love that your top upvoters love EOS! :) BTS, EOS and STEEMIT will be one of my long term holds

Haejin I'm wondering if you are taking into account a large correction in the altcoins and BTC into these predictions? Thanks!! Upvoted

Yes, the past two weeks of analysis for BTC

Getting emotions under control! Ready to bust out, up 18% today!

Where do ya'll store your EOS? I just have mine on Exodus right now. Anybody have access to a good tutorial of getting it onto a Trezor via MyEtherWallet?

InDeeD , My Freind One must Comprehend deeply the art thereof within "Mental Chess" to feel deeply and know only when the moment to act prepares itself.

Great Blog , EOS is on a steady climb will be some road bumps still ahead before launch however.

I wish you MASSIVE profits!

very nice hello my posts upvote in followe me thanks