QuantStamp (QSP) Could Have MUCH More to RUN!! After a healthy correction.

From a technical perspective, I like QSP as it could offer another entry point after a likely brief correction. The below chart shows a close up of the pattern and Elliott Wave counts of the corrective a,b,c and the impulse set that led to the completion of five waves. Elliott Waves states that after five waves, there is a requisite a,b,c correction. The requisite a,b,c correction could look like as shown in below chart...the handle. Not also how the five impulse waves become the subwaves of higher degree wave i and so the correction will represent the wave ii. What comes after wave ii? Wave iii UP! We will likely get an opportunity to get in at the bottom of wave ii for the ride up to 20,214 Satoshi target! 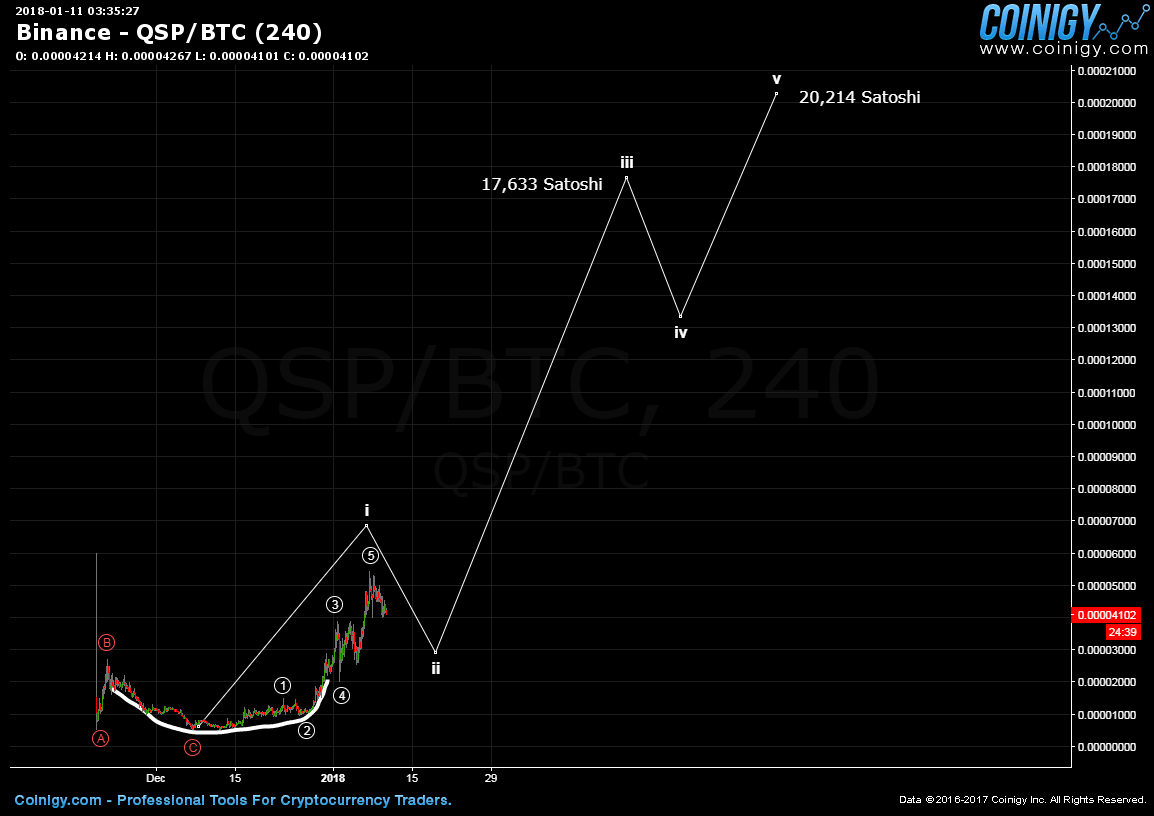 Here is the QSP/ETH pair and wow! Check out the a,b,c and the impulse set all within a Cup & Handle....a compact fit! IF the handle is complete or near so; then it would be leading the QSP/BTC pair. The higher degree of trend waves show that wave v could bring QSP/ETH to 0.002594 ETH. I've consistently found that Cup & Handle patterns, while slow to completion and confirmation, often provide support for an extended price rally. Of course, with the requisite corrections! 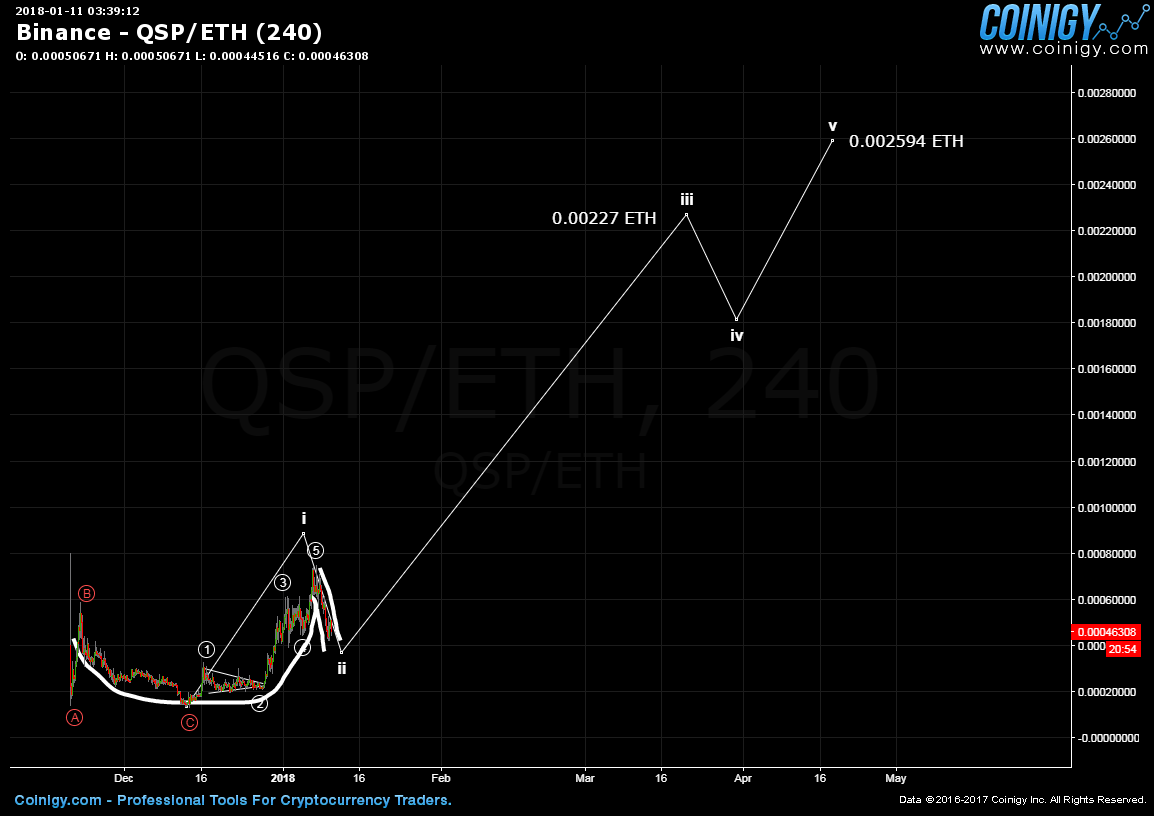 Legal Disclaimer: This is only my opinion, make of it what you wish. What does this mean? It means it's not advice nor recommendation to either buy or sell anything! It's only meant for use as informative or entertainment purposes.**
#blockchain #cryptocurrency #quantstamp #money
4 years ago in #bitcoin by haejin (86)
$349.79
313 votes
Reply 43

XVG is about to make me cry 😢

Still my biggest position. I'm still HODLing MCO and BTS. Also bought some XLM little over 60 cents. At least EOS did well for me.

Those and DGB and POWR 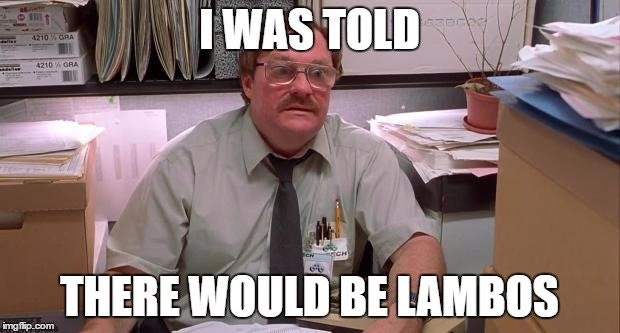 What is so special about MCO?

i bought xvg early, made good money and sold today. Ready to branch out into new horizons and it was killing me to hold that bag any more. Too much FUD and the wallet isnt great

Unlike practically every other crypto-card Monaco was unaffected by WaveCrest incident and they focus on the more crypto friendly South East Asian region which also has very high population.

Have you looked into ETHOS? seems like another option, I was thinking about buying 50 MCO but have held off for now

I've been following it for some time and when I really dissect it ETHOS isn't that unique. They don't have a purple cow. Their jurisdiction (Singapore) is very good for cryptos and the team is good. But Bitshares can take care of a lot of ETHOS attempts. If ETHOS suddenly disappear, it wouldn't matter that much. They are just better marketing and better UX. Investing in ETHOS is like investing in Cardano. Just keep it for the short term.

Now I want to get rid of it haha, looking into other alts right now, REQ and ODN on the mind. I'll get some MCO eventually....... neeed more $$

REQ can also loose due to even basic currencies like PIVX, Dash etc are trying to make people their own banks and there are already decentralized markets like SYScoin.

On the other hand I really love ODN. I won't take a big position. But I do think they have something very important :https://www.reddit.com/r/ObsidianProject/comments/7om42a/why_odn_see_how_we_stack_up_to_the_competition_we/

ODN is a really good pick.

HODL mate. Verge has a top product and vision. The current trough has happened before and it will be up up and away in the near future.

Hey all!
I have put together some picks. They are low market cap coins that I believe have great potential for profit. Obviously there is risk and do your own diligence before buying. I am not a financial planner or advisor.
In no particular order:

(Follow me on my new Steemit for daily picks, and have an excellent day!) It's nice to read this kind of opinion, thank you for sharing your opinions. 😊

hey boss, can we get an update on TRX

"What comes after wave ii? Wave iii UP! We will likely get an opportunity to get in at the bottom of wave ii for the ride up to 20,214 Satoshi target!"

Or may be not. Winks.

I don't spend a whole lot of time with T.A but I think auditing is going to be an essential step in finalising smart contracts in real-wold situations. I can definitely see a use case going forward. Great article.

Thanks for sharing sir your opinion about it.

thanks for the insight

Maestro! this is very timely. Thank you!

Can you please provide an update on QASH.

I also bought DentaCoin per your analysis.

Hello @haejin
ive been keeping an eye on bread and working on my elliot waves.. i was wondering if you can take a look and see if you confirm my counts.
thank you in advance for taking the time to help! 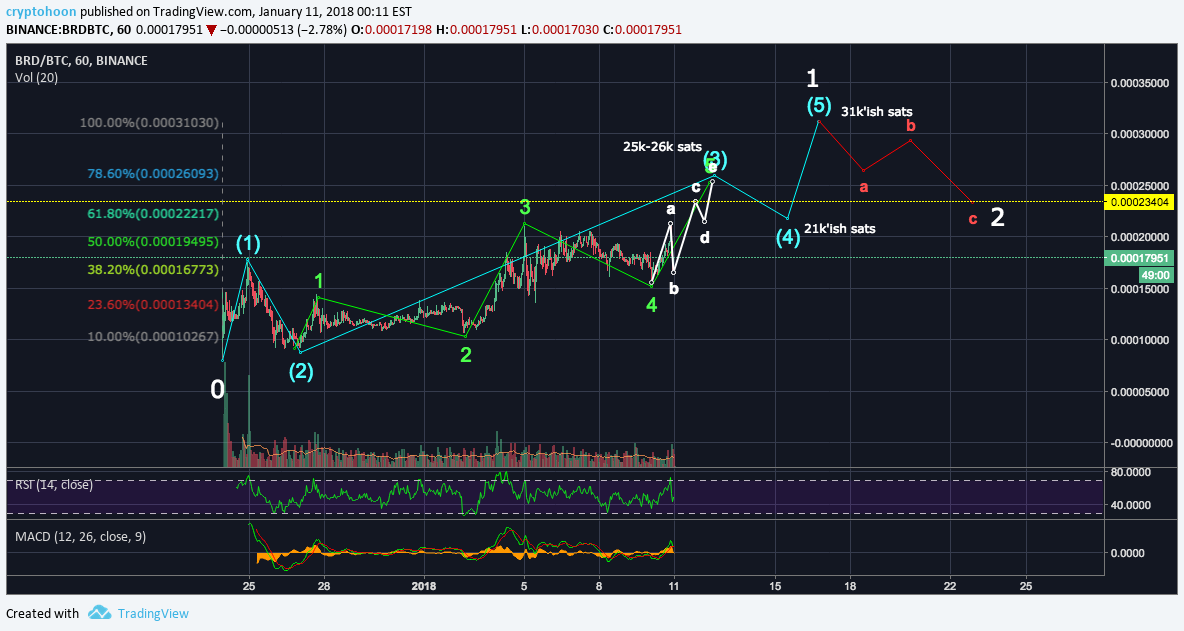 Hey all, was writing my first Post and got massive last minute downvotes, no upvote support.

I was curious about it, i didnt remember exactly was i was writing.
I thought i was maybe just writing sh*t, cause i was high from Spraypaint... Roundup ready on my Bananas or whatsoever.
So i checked it out out and who wonders: Berniesanders and his "friends" downvoted me, didnt even read my words :

posted it again, if you like my words, just give me upvote

if u want me shut up, just ignore ;)
Appreciate your support, thank you.
Massive Profits to all of you!

Are you really confident that this kind of analysis is at all predictive of future price action? It seems to me that the current market is irrationally effusive, extremely volatile, and extremely unpredictable...

Am I the only one who finds this a bit too optimistic? I'd like to believe this to be true and I definitely believe in the potential being demonstrated by the application of Quantstamp on smart contracts but this just seems to be one of those "too good to be true" cases, and usually in crypto when that happens....

Love Your Great Analysis Haejin Please help me build my blog too
Please follow me @asifgoraya123
I am a crypto trader analyst and researcher.
get latest news about bitcoin altcoins realtime,
I am a noob steemian please help me to build some good audience to present my content i hope you will enjoy it.
See you all there.

Have made a post showing how you can mine bitcoin here

Quantstamp is a good project.. Has good potential goin ahead. Invested last week.