Bitcoin Dominance is in the process of another dead-cat bounce, although I am hesitant to attempt to call a top yet. I predicted the major decline in bitcoin dominance in the first half of 2017 and then successfully called the first dead cat bounce late last year. Here is the updated chart: 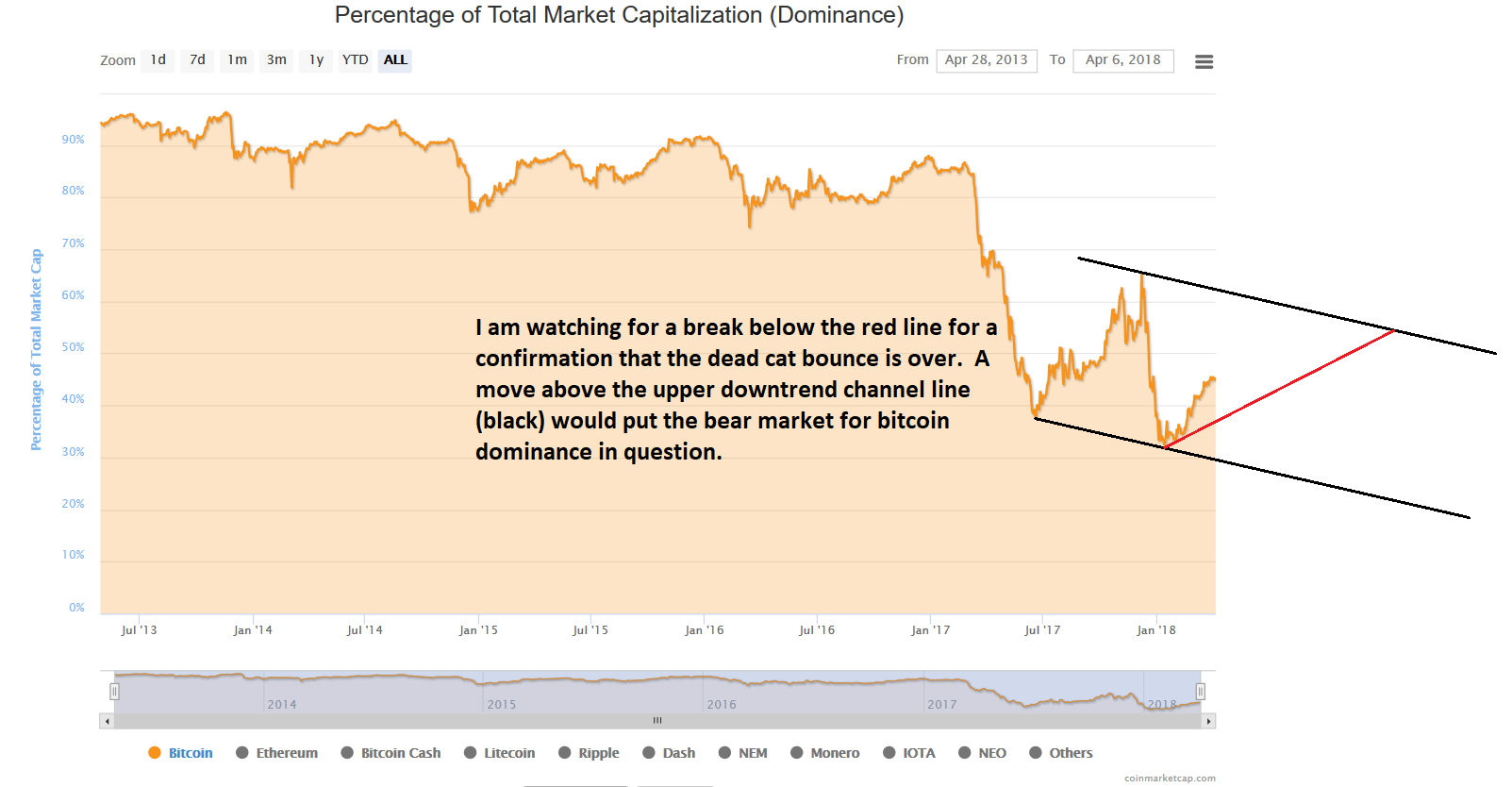 I often find it beneficial to read the opinions of people who disagree with me. Case in point: Jimmy Song’s article “Why Bitcoin is Different.”

In the article, Jimmy makes the case that bitcoin is not only the dominant digital asset, but all others are completely centralized networks with “dictators” at the helm. He makes the following (borderline delusional) statements.

Every cryptocurrency and ICO other than Bitcoin is centralized.

Altcoins have the same problem, though not in such an obvious way. Usually the creator is the de facto dictator for the coin and can do the same things that a government can.

Jimmy later contradicts himself with this statement:

In the early days of Bitcoin, Satoshi controlled a lot of what was developed.

Satoshi was an early “dictator” of bitcoin in the same sense that Vitalik Buterin is an early “dictator” of Ethereum. Eventually, these tyrants relinquish control over the network, and Buterin has mostly done so already. If Buterin said he was going to create 1 trillion ETH for himself, the network would not allow it. A “de facto dictator” should easily be able to get away with this.

Jimmy goes on to make the following statement:

Ethereum has had at least 5 hard forks where users were forced to upgrade. They’ve bailed out bad decision making with the DAO.

Jimmy either ignores the fact or is ignorant of the fact that bitcoin had a bailout of its own in 2010, when 184,467,440,737.09551616 bitcoins were created out of thin air because of a stack overflow bug. The chain was subsequently bailed out by reversing those transactions.

Finally, Jimmy chooses to ignore reality and argues against market capitalization as a useful metric in his piece entitled, “Why The Bitcoin Dominance Index Is Deceiving.” The crux of the article is best summarized in Jimmy’s thought experiment near the end of the article:

Consider this thought experiment. Suppose I make a new coin tomorrow called FoolCoin. I premine the whole thing (100,000,000 coins) and only make 10 coins available. Perhaps I create a marketing campaign and even get enough people to desire the coin that Poloniex lists it. I sell just 1 of the coins for $10. FoolCoin now has a $1 Billion market cap. The next coin, I sell for $11 and now FoolCoin has a $1.1 Billion market cap. If there’s enough demand, I eventually end up selling the other 8 coins for $20 each at which point, FoolCoin now has a $2 Billion market cap.

I’ve just added $2 Billion dollars to the cryptocurrency market cap and have reduced Bitcoin dominance by a few percentage points. But did I really take anything out of bitcoin other than perhaps a few hundred dollars worth?

Jimmy assumes, as others do, that market participants generally don’t have the mental capacity to rationally make decisions for themselves when buying and selling. I, for one, give market participants much more credit than that. True scamcoins like paycoin eventually go belly-up, although some effect on market cap may exist for a while:

I doubt FoolCoin would keep that $2 billion market cap for very long, or else ERC20 FoolCoins and their clones would be created ad infinitum. Again, someone must make the conscious decision to pay $20 for a FoolCoin. Jimmy thinks this is trivial to get someone to do.

Sadly, Jimmy has been on the wrong side of the market for years as bitcoin dominance has steadily and consistently declined. In the words of Benjamin Graham, “In the short run, the market is a voting machine but in the long run, it is a weighing machine.” The decline in bitcoin dominance will be a process. It won’t happen overnight, but eventually the market will favor the most sound of these chains. POS systems will likely be the ultimate winners.

Interesting analysis of bitcoin and the total crypto market. Question in my mind: Will Bitcoin's fall in dominance be due to the fall in the price of BTC or due to the increase in the value and number of other crypto coins?

I see you like POS over POW. Etherium is moving to POS, supposedly/hopefully this year - do you see the price of ETH rebounding once they initiate POS?

Long term it is anyone's guess whether bitcoin rises or falls in value. With all of its flaws, it is still better than fiat.

I see the value of POS systems as a whole gaining long term. If ethereum can maintain an edge in the market, then it should do well.

~ ~ ~ ~ Curious if you were interested in SPONSORING our Challenges and we would compensate you? The Cryptocurrency Challenges @revelationquotes

Hey Ben are you on Discord?

@helikopterben you were flagged by a worthless gang of trolls, so, I gave you an upvote to counteract it! Enjoy!!