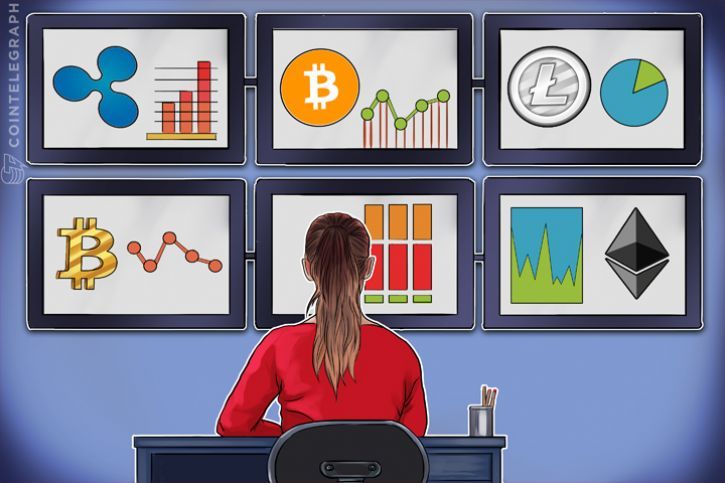 The views and opinions expressed here are solely those of authors/contributors and do not necessarily reflect the views of Cointelegraph.com. Every investment and trading move involves risk, you should conduct your own research when making a decision.
When stock prices of companies surge, just by adding the word ‘cryptocurrency’ or ‘Bitcoin’ to their name or by announcing entry into the Blockchain technology or sometimes by pure speculation, it is a sign that things are getting out of hand.
During such times, short sellers like Andrew Left, founder at Citron Research look at strategies that will help them to benefit from the fall.
Similarly, we believe that with the sharp rise in Bitcoin in 2017, a few short sellers will be salivating to short in the futures market once the upside momentum wanes.
However, will it lead to long liquidation or will the short sellers be forced to cover leading to a squeeze is difficult to predict.
Another thing of interest will be to see whether the altcoins hold out or are dragged down along with the leader.
Let’s try to find it out.
BTC/USD
In our previous analysis, we had warned the readers about a likely increase in volatility. We had also advised trading with stops because the cryptocurrency was at a risk of a deeper correction if it were to break below the critical support.

The cryptocurrency has broken down of the uptrend line. This confirms a break in the momentum. Today, Bitcoin came close to its critical support of $15,200 and bounced from there.
Now, the rebound will face resistance at the trendline, which previously had acted as a strong support. If the price fails to rise above the trendline, chances are that it will break down of $15,200.
The lower targets are $12,505 and then $10,760 which is the 50-day SMA support. The negative divergence on the RSI also points to a likely fall in Bitcoin.
Our bearish view will be invalidated if Bitcoin climbs back above the trendline.
ETH/USD
We had hinted that the bulls were attempting to breakout above the lifetime highs. On Dec. 18, Ethereum reached a new lifetime high.

However, the highs did not fix as profit booking and selling forced the cryptocurrency back below $780.
The support exists from the trendline. If this level breaks, we can expect deeper fall. On the other hand, if the digital currency moves above $800, it will rally towards its target objective of $995.99.
Contrarily, if the bears push Ethereum back from the highs, it is likely to consolidate between $610.03 on the downside or $780 on the upside.
BCH/USD
We have long positions in Bitcoin Cash from $1,520 levels. We had recommended the readers to trail their stops higher, instead of booking profits at the target levels of $2,387 and the lifetime highs.

What should you do when you are sitting on 100 percent profits within a short span of time? You book partial profits and trail the stops on the rest.
So, the traders should book about 50 percent profits on their existing positions, keeping in mind that the cryptocurrency can rally even from the current levels. We have seen that the last time, Bitcoin Cash had plunged after making a new lifetime high. Hence, it is better to pocket some of the gains rather than leave everything on the table.
The remaining position can be trailed with a stop loss of $2,400. We need to subsequently raise it as the rally continues.
How high can Bitcoin Cash go? The next target on the upside is $4,514.5173.
XRP/USD
Our assumption of a volatile range-bound trading action on Ripple has also turned out to be correct. Yesterday, higher levels saw profit booking and today, along with buying at lower levels.

As a result, the cryptocurrency is forming a pennant pattern. If the price breaks this formation out forming new highs, we are likely to see a resumption of the uptrend.
On the other hand, if Ripple breaks down the formation, chances are that we will see a slide to the 50 percent and 61.8 percent Fibonacci retracement levels of the rally.
It is very difficult to predict the movement within the formation, as it is likely to remain volatile.

IOTA/USD
We had pointed out about the range tightening from Dec. 14 to Dec. 17. We expected a sharp move thereafter, once IOTA broke out of the downtrend line.

The cryptocurrency has retested the highs, according to our expectations. Now what?
Currently, the highs are offering a stiff resistance. We can expect a consolidation near the highs for the next couple of days.
If the next attempt to break out to new high succeeds, a rally to $8 levels is expected.
On the other hand, if the price fails to break out, IOTA will become range bound between $3 and $5.5.
LTC/USD
We expected the bull run to resume on a breakout and close above the lifetime highs. However, our assumption turned out to be wrong, because Litecoin broke out to new highs on Dec. 18 but could not sustain at higher levels

Yesterday, the price fell back into the range and has gone lower today.
We believe that the cryptocurrency will consolidate between $243.86 and $370 levels for the next few days.
A breach of either level is likely to start a new trend. Until then, range-bound action will continue.
DASH/USD
We had anticipated a range bound action on Dash. But the cryptocurrency surged new highs yesterday.
source- "https://cointelegraph.com"