Valuable lessons you should be learning EVEN IF you did not invest into Bitconnect!

I did not invest in Bitconnect, but observing what happened has taught and re-enforced so much! QUICK READ! 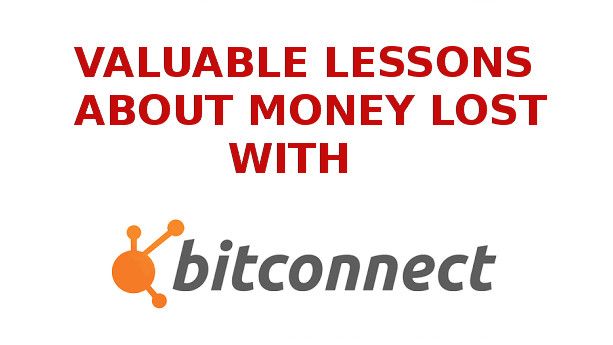 As you get involved with trading cryptocurrency, when things happen for the worst, this is the best time to analyze what happened and see what you can learn.

EVEN IF YOU DID NOT INVEST IN BITCONNECT THIS IS IMPORANT

I heard about Bitconnect. I browsed the site. I saw BCC token constantly being talked about. I could have gotten involved, but I decided to stay away. Every single time someone was pumping Bitconnect, I just focused on the cryptocurrencies I am most favorable of...

As soon as Bitconnect's lending platform closed and people ran around screaming about how many thousands of dollars they lost. That's when I opened my ears and spent 4 solid hours investigating the situation.

The first thing I did was watch youtubes from people who posted how much money they lost. I had to hear their pain and their frustration. I then went back in their youtube history and found older videos where they were promoting it.

There was a lot to be learned there... why did they believe in it so much?

The potential rewards and the amount of people doing it was tempting.

Excitement, happiness, and greed can confuse your brain into ignoring warning signs!

When we're excited, we're less likely to be cautious and careful.

When there are so many details, we end up fixating on the main ones. For instance, this is what people learned about Bitconnect that got involved:

That's 9 things... after learning all of those, peoplt felt like they became an expert on the subject.

Except they forgot a few other important things that were NOT advertised.

...those were 9 things most people didn't think about when they joined Bitconnect.

Now these are valuable lessons everyone can learn after watching Bitconnect shutdown.

Most people who lost money, figure that it is up to the government and courts to get their money back. What ever happened to individual responsibility?

If you play the shell game on the street with a hustler, you have to realize the game is rigged and not fair. Would you expect government and courts to get your money back for you too? Rather than prosecute those who improperly ran Bitconnect whether it be intentional or unintentional, I think the greater good for the public would be for the government to educate their citizens better.

If mommy and daddy are always going to save the child from harm, then the child is going to walk into harm again, and again.

We would need less laws, less courts, and less regulation, if the public was smarter and could spot scams themselves.

That's right! Personal financial responsibility, one must do their research and make an educated decision. Problem is most people do not want to do that.

I invested in bitconnect and I even made a good return on my money.
The whole time I told people that I invested in a pyramid scheme, at some point I expect it to blow up. I only put in "Vegas" money and that is all anyone should put it.

However, I knew making good money was possible until it blew up as long as I pull out profits regularly as oppose to re-investing profits. That is what I did, people told me I was missing out, but was I?

Due Diligence, access the risk and then decide if an investment (or gamble) is right for you. Relying on others (read: the government) to make you whole is a recipe for loss.

See, now that was smart. You took advantage of an opportunity "as a gamble".. and played with it cautiously. When Bitconnect shut down it probably didn't surprise you.. and you protected yourself the best you could.

Relying on others (read: the government) to make you whole is a recipe for loss.

That's true. So many people expect their "full refund" to show up one day, and it doesn't. Yes, people can get prosecuted for running a scam, but rarely do you ever see a full refund... (ok not rarely.. I'd say NEVER)

So if the government can't help you, and scammers won't help you... who is left? The investor has to protect themselves anyway... so it's best to learn about these things even if you weren't involved directly.

It's great knowledge to obtain when a scam goes belly up so you can learn from other people's mistakes and save yourself from making similar ones in the future.

We have to support coins with real solutions and that can contribute with the development of countries and company procces and we have to avoid shit coins that do not contribute to nothing. Regards

When I first heard of Bitconnect I immediately felt like something is not right with it. Sounded really scammy and I didn't want to get involved with that at all. I'm happy I didn't get involved, but it's also saddening how many people actually fell for it and then lost huge amounts of money in the end...
It would definitely be smarter if people were educated about such things. If someone would teach the masses how to NOT fall for these kinds of things, then people wouldn't need to depend on the governments to save or retrieve their money...

As you get involved with trading cryptocurrency, when things happen for the worst, this is the best time to analyze what happened and see what you can learn.

Once general lesson is that cryptocurrency is pegged as "high risk" for a good reason.

As a general rule, beware high excitement. It's often a sign that the crypto is headed by a skilled promoter, which is not the same thing as a good developer or good entrepreneur. This rule kept me out of Paycoin (a notorious scamcoin in its day.)

People just like to follow others like sheeps. It’s not likely that people are investigating for themselves and as you spotted correctly y believe this is government fault... education should teach us how to analyze things and make our own opinions on things...

I was really close to joining a few times thinking I can get in before all this shuts down and gain a little bit of money. I'm glad I didn't and learned last summer with the altcoin boom what happens when you invest in things that you don't believe in.

Most scams will ask you to park your money for a period of time where it is not accessible to you. They do this to get enough people involved. In this case, the minimum time for pulling your full money out was 120 days... That gave them 4 months to ramp this up, and the shut it down.

November 2017 Bitconnect reached a high peak. It only made sense they'd have to shut it down by February incase too many people started pulling out their money all at once. That's what people started doing it appears which led to the crash.

Never separate yourself from your money. That's the only way a scammer can gain an advantage.

I like it so much how you have putted in words those facts and especially that part with government. Most of the people who now seek for help from the government are the people who would not like to pay taxes for the profit made on Bitconnect. I can condemn people from Bitconnect for their scam, that is a very serious thing which they did, but I can not show much empathy to the people who lost their money.

If it sounds too good to be true, then maybe it is not true.

I do show empathy. People are driven to take risks because the economy is so hard on people.

..its a terrible thing when these same people invest the last bits of what they do have on a hope and a prayer that it works for them.

....many of them can't afford the hard lesson that was just delivered to them. It's a sad situation. So yes, I do have empathy for them. If you look at it this way, maybe you'll re-consider your position on empathy a little.

Again, the way you see these things is very original and inspiring. I guess the reason why I don't tend to show them much empathy is because in my country, 20 years ago, there was a smart guy creating a system exactly as this one made today by Bitconnect. There were a lot of people investing in it, they sold their cars and some of them sold their houses to invest in that ponzi scheme. Others were a little more realistic, telling them not to do this because there was clear something wrong and of course, too good to be true. A lot of people did lost a lot of money there.

Seeing Bitconnect doing the very same move today makes me wonder about how much people have evolved in the last 20 years, how many of them are still falling for schemes like this. I guess that since I am here I have read a lot of times and even added at the end of my articles whenever I have posted about cryptocurrencies:

Never invest what you can't afford to lose.

And investin in cryptocurrencies only, gives a lot of people a huge profit, but now, why did so many people needed more than the basic profit that they could make investing Bitcoin or any other well known technology that has been here for years, that has a long history and is more safe than Bitconnect, ignoring in the same time all of the other people warnings. Because there were people making warnings about Bitconnect that it might be a scam...

Indeed I stilll show some empathy because most of the people investing in Bitconnect have lost a lot of money and it is not funny to see a situation where some guys take advantage of others because they are easy to trick, taking their hard worked money by speculating greed, the hope for a better life and FOMO.

I still believe that the guys involved in Bitconnect should go to prison, for their scheme or for whatever else reason, not because of the laws which are not complete yet regarding crypto investments, but for ethical reasons and because karma should show us some justice, but I am too optimistic, I know :))

That's the idea some times greed drives people to their deaths they forgot on time, how they neglected to do a thorough investigation before promoting and investing in a coin that hasn't even be here for a long time

Thank goodness i didn't invest in it ,sounded to good to be true and it was at the end of the day

One of thing that is becoming popular in the crypto space is doing your own research.

Your post about "Valuable lessons you should be learning EVEN IF you did not invest into Bitconnect! " is very good

I was seriously considering Bitconnect on January 3, 2018 but decided to go with Hashflare instead.

Good thing I did else I would be out thousands of dollars.

This is why international banks rely on Bitquin, try to deal with it, avoid cheating and embezzlement of funds, but the Betcuen Adventure trade because of the big price, that is, it can suddenly fall off, which can lead to a great loss to their owners

I think that it is definately important to do research, about the good snd the bad. I am quite sceptical of some get rich quick sceme. You have to investigate for yourself.

My idea is the product of BitConnect people's ambitions