Too Much Information in the 'Crypto-World' and you can't keep up?! This Post is for you! Weekly Currency Review Hi Steemians,
So as we promised, the continuation of the Post we published a few days ago.

Does anyone ever feel that the situation in this market is: TMI - Too Much Information !?
We want to keep track of the currencies we've invested in and can't keep up! We Googled and receive dozens of news sites and hundreds of articles on various topics about it.

Entering Facebook and reading endless opinions of people. Go on Twitter and see tweets for and against, of various interests. So much information, so many opinions, too fast! Who to believe? Where to invest my money and when?

=> Welcome to our weekly currency review <=

ClearPoll | order above all. ClearPoll wants something simple, but rare nowadays. Provide a reliable source of information. ClearPoll brings together the public opinion, using surveys based on Blockchain tech on any subject, creating a real and reliable public opinion.

What do we get? 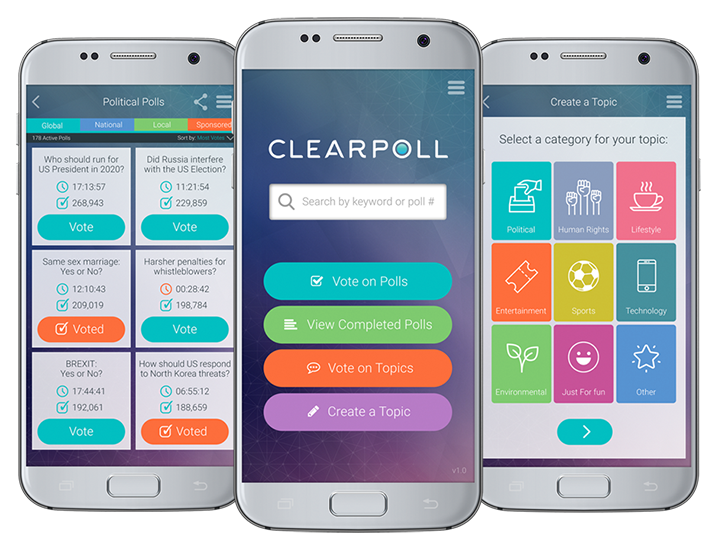 ClearPoll Survey application - Surveys, of course, are not an invention of Clearpoll but surveys based on Blockchain are totally their unique patent! Why on Blockchain? Reliability - The results of the surveys are maintained on the Blockchain and cannot be changed and influenced by any central factor. Speed - Through the platform you can collect millions of people's opinions on each topic, which increases exposure and enables you to achieve results in a shorter period of time than ever before. Compensation - Pollsters and voters are rewarded with POLL according to the number of votes - making Clearpool's platform worthwhile for everyone!

Clearpoll Calendar - It is very difficult to track the amount of information from so many different sites. In the Clearpoll calendar, we get the perfect solution. Enter the site, choose one or more coins that interest you, choose "past events" or "future events" and receive a wealth of information - dated, organized, linked to the source and most importantly - two buttons at the bottom Real or Fake. Like that, we have the ability to vote, if any information is reliable or not. POLL is an ERC20 Token. There are 9 million POLL Tokens in total and there will never be more! The Token began to be traded on the stock exchanges from 27 October about three months ago, at the HitBTC and LiveCoin trading sites and today it can also be traded in EtherDelta, Cryptopia, and Kucoin.

Poll initial value was $ 0.12. Two months later, it reached its peak price of 8.5$ at the beginning of January (a jump of about 7,000% yes, yes), after which the currency experienced a plunge along with the entire market in January, and at the time of writing this Post, the price is 1.18$. 50% of the Tokens sent as income from the Clearify app will be removed from the system until they reach the maximum set of 2 million coins. Which is going to increase by a total of 20% the value of the currency. In addition, a million coins are held aside and burned in groups of 100 each time a survey is completed on the application.

What awaits us in the future?

The "Alpha" version (Initial version) currently works only on Android.
In 1 week the Alpha version will also be launched for IOS - iPhone, Mac.

On May 18th, in about three months, just before the start of the summer, their full application will be launched, in my opinion? and this is just my opinion - the app that will drive us crazy this summer.

In the meantime, you can stay up-to-date with them on their website and in the main events calendar of the Cryptocurrencies. Needless to say, all the above dates were also taken from there.

Clearpoll has a lot of potential on the Internet and they bring a real solution to a large and comprehensive problem that we all deal with daily, day-to-day information reliability. ClearPoll allows everyone to express his opinion, get answers to his questions and even be rewarded for it financially. ClearPoll encourages people to ask questions and relies on our broad-based public opinion. We have already mentioned before that Brazil is planning to use the Blockchain technology in order to improve the voting system for prime minister elections in the coming elections. Are they planning to make the elections with the help of Clearpoll or their inspiration? A point of thought, for sure, the idea behind the project is certainly worthy of attention and also helps us a lot in writing our Posts, which made us decide to share this information with you.

So far for now, Have a wonderful day!
@KingDavidHarp

interesting and enjoyed while reading

ClearPoll is very interesting indeed. A fun fact: Bitcoin private, which will be a hard fork of Zclassic on the 28th of this month used ClearPoll to choose the name: "Bitcoin Private"

Really nice info. Indeed there are too much information out there and finding the right ones can be painful.

I will definitely check the calendar app :)
Thanks for sharing XD

I heard about this on the badcrypto podcast with Joel and Travis. I hope this takes off. Current polling is useless tripe.

I hope that with time and more people it will improve, it's a project that can really take off high.

This post has received a 0.64 % upvote from @booster thanks to: @kingdavidharp.