profitgenerator (68)in #bitcoin • 5 years ago (edited) 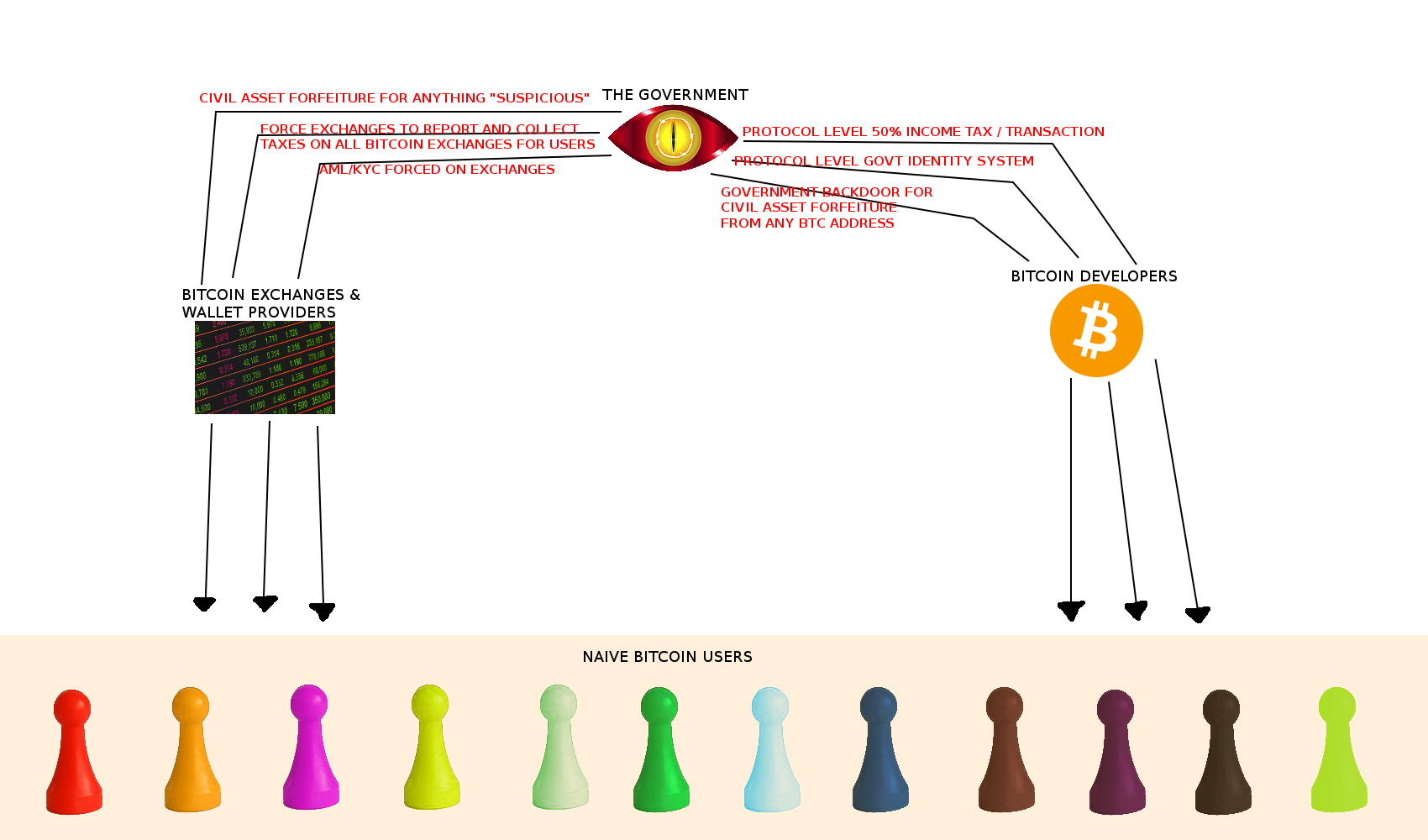 Just look at the illustration above, this is how easy it is to subvert Bitcoin and turn it into a Banking System 2.0. It's really nothing surprising, Bitcoin is not decentralized, it's centralized as hell as you see more and more custodians storing coins and more and more influence from the developers steering down Bitcoin into a path of no return.

Until this issue is not fixed, I'm afraid we won't have freedom through crypto-currency, but this wonderful project will easily turn into an Orwellian nightmare. In fact then the Anti-Bitcoin sheeple will be right, like the idiot trolls from here who are probably paid shills to discredit Bitcoin.

It's really interesting how much subversion is happening in the Bitcoin community. On one hand you have the mainstream media and their useful idiots promoting Anti-Bitcoin rhetoric, and on the other hand you see the exact same thing happening as I've illustrated in the picture above, that will legitimize the Anti-Bitcoiners.

The question whether Bitcoin users are smart enough to choose freedom instead of centralization? For example there is nothing wrong with private enterprises offering quick instant exchanges like Blocktrades, Shapesift or Changelly.

The problem is that Market Making should not be centralized, that is just too much power for an entity, and can be easily hacked or destroyed with Orwellian legislation. Market Making should be pure Blockchain based, like Bitsquare does, and then you can have instant exchanges built on that.

Obviously market making requires big servers, so this needs to be distributed while you can have smaller entities with full nodes drawing price feeds and API trade access from that. This is convenient for customers who don't want to setup a full node just to exchange altcoins, while also removing centralization from market makers.

...and now you know why we have over 700 altcoins. If Bitcoin gets regulated, people will move to alts.

But the entire altcoin space depends on Bitcoin. If you haven't noticed there is probably a 85% correlation between Bitcoin price and altcoin price.

If Bitcoin loses 42 billion market cap, it will probably not flow down to altcoins, it will go back into the Dollar and Euro.

That's today. Not tomorrow. People innovate fast. Solutions get created overnight. There are too many people in this just to sit back and watch it all get destroyed if it happens.

Within a week or two after Bitcoin got regulated. I bet you'd have solutions popping up all over the place.

Keep in mind how bitcoin first got traded. There were NO exchanges. It was all IRC and otc (over the counter) transactions person-to-person. If we have to go back to the stone ages, everyone will... and we'd rebuild from there.

I hope you are right, In any case this will be a slow battle, and it will require a lot of patience. Rome wasn't built in 1 day. It will take a lot of work to have a free currency system.

Bitcoin had it's role, certainly, but if it's to fall, then hopefully a better one will take it's place.

Shhhh (and this is not a shill comment) but Peercoin was designed for that reason. :)

To qualify that, Satoshi disappeared from Bitcoin to persue other projects

I like Peercoin's features but I just don't see how it can gain market cap relative to BTC when you have Dash and others taking most of it.

CoinMarketCap means very little. Everyone puts so much time and effort into thinking market cap is important. It isn't.

Coinmarketcap.com is a very SMALL indicator of how liquid a coin is... but it's not true. Just because X number of coins exist, and exchanges show trading activity at Y price... doesn't mean if all X coins were sold... they would yield that coincap value.

It's here where Peercoin shines. Remember AuroraCoin? The official cryptocurrency of iceland. Wow.. it had such a huge coinmarketcap, it was like #4 on the list. What happened? It imploded for number of reasons.

I don't believe Dash will be as important as it is in 10 years. However I think Peercoin will get noticed for it's technological stability. (That's already happening, with PeerAssets and Indicium)

Let me ask you... other then trading and speculation, how many times do you use Dash in your daily life to buy and sell products from the Internet? :)

Dash is nothing more than an idea. It has everyone excited. This is a fad for now. Long term trends aren't apparent yet.

I don't even own that much Dash right now, I've shuflled some of the bigger coins around into smaller alternatives.

At this point I am looking for a stable alternative to Bitcoin if Bitcoin fails with the UASF.

If Peercoin will be that one, then so be it, I am not really biased. But currently speaking I see more opportunity in Dash than in Peercoin.

That might change of course ,but this is just how I see it now.

If Bitcoin loses 42 billion market cap, it will probably not flow down to altcoins, it will go back into the Dollar and Euro.

It's hard to believe this. The demand is so huge and it will be even bigger when people start to really move to better currencies. Currently Bitcoin sucks very much because it's so slow and expensive to use. When the network effect shifts to better working alternatives, people start to actually use them again as currencies and we will see even bigger boom.

no we can trade fiiat for altcoins JUST as easily, using the SAME tech too! all btc ats can be upgrades to have Steem, litecoin, ETH, etc, lol,
no irs law can help them, @intelliguy is corect!

Good points & dialog here - my greatest concern with cryptocurrency is - what's stopping the central banks from buying / consuming / gathering all of it in much the same strategy as JP Morgan is hoarding silver? Perhaps it is not that simple but do not underestimate their algorithmic technology . . . and ability to throw everything in their shady arsenal at it

I would actually quite enjoy that, please tell them to throw 1 trillion $ into AMP:

I would like to make some money out of that. But they will never do that since that would weaken their curreny, why the hell would they do that? Since they dont have printing power in BTC?

Nah, I think they will do this through legislation.

Certainly, still grappling with the common sense logistics of it all here! My next question would be is their inability to 'print bitcoin' akin to a inability to create an multitude of Mt. Gox scenarios?

Mt Gox is what would happen to all Too Big to Fail Banks if they would be removed from government protection.

Certainly if people are stupid enough to give their money to a custodian, then they really deserve the consequences.

Government probably will tax you as you withdraw it as cash from the banks etc.

That is true, but they won't stop there. I highly suspect they will try to push for a protocol level tax. Like an additional transaction tax.

There have been already talks about that in mainstream economics to just slap a TX tax on bank wire transfer, but the banks would not allow that.

However it's ridiculously easy to do that in Bitcoin. Practically nothing is stopping them from coercing developers into introducing that patch.

Only the full nodes can veto that, so once the nodes are centralized as well, Bitcoin could be handed over to the government.

Just to lighten the mood a little, but why does the Government have to look like the Eye of Sauron? Lol

Well the endless surveillance + the general evil that goes on in those circles, I think that illustration pretty much sums up their behavior.

The Government will regulate anything and everything that it CAN regulate.
What is not mandatory.....Is FORBIDDEN

what...do you have a problem with that comrade?

I don't see an easy way out of this. Eventually some aspects of cryptos will become subject of control. Thing is the technology can also ensure spaces (like the ones you mentioned) where one can go full ninja mode.

This is not just some control. This is totalitarian control, it can't get any worse than this if they implement this.

If this is implemented then Bitcoin will be lost.

Ever heard of BLOCKNET? I still hodl a ton of them. And my trust vever diluted. And the BLO is comin back.

Interesting, I haven't heard of it yet, I have a hard time browsing throug the thousands of altcoins, but yes it's probably a good one.

Time will prove them wrong, don't mind them

This is quite interesting..

It's also quite disturbing.

Not entirely, the cat is out of the bag, the technology is out there, only the implementation was bad. In the future maybe we can get through this, but if they really mess BTC up, then it will take decades to reverse the damage.

Why regulations are bad from your stand point? Bitcoin it is regulated in most of the civilized countries... Regulation does not mean centralization, please do your study and use your head...
I see often on this steemit really poor quality, like this post, being over rate... All due respect steemit, you are not ready for the world right now :)

What do you mean by poor quality?

This could happen for sure, so what? Bitcoin may go, but a new coin will rise and be better.

If Bitcoin was to become centralized, it's not like the entire cryptocurrency space and the ideas behind it would suddenly disappear.

That is true but it would be a huge blow to the entire movement that I am not sure we could recover from. Having 42 billion $ just like that become centralized would be a very effective way to steer back the rebellious sheeps into the pen.

It would be for sure, but I think quite a big part of that $42 billion already has nothing to do with the movement, but with people wanting "easy & quick profits".

The new coin will rise over time like Bitcoin did and the sheep will join again.

I don't necessarily care about the speculators, they knew the risks. I am worried about the entrepreneurs and visionaries that will lose their confidence and ambition if this thing is lost.

If it happens, it happens.
Just means it wasn't good enough.

Good article, finally some reason in all this hype.
Here I have summarized my thoughts about particular governments like Japan, China, EU and US, among others, and why their stance on Bitcoin seems to be so different: https://steemit.com/bitcoin/@rapshmelth/legal-and-geopolitical-speculations-regarding-bitcoin

It will happen sooner than we expected. Japan allows BTC as its currency. Germany also will institute the taxation for BTC.