Steemit has been at the forefront championing the idea of a decentralized social media platform where users get to contribute value and are rewarded in return for the value offered to the community.
It is an interesting platform that has grown so fast and continues to grow each and every day.
Platforms like steemit have completely revolutionized social media and how we interact.

Who would have imagined that someone can actually earn through posting stuff on social media platforms..?
I personally couldn't believe it until i came across Steemit .

After Steemit, i was curious to find out whether there were any similar platforms such as steemit where people/users could earn rewards through sharing and curating content.
I began my research and found out that there are quite a number of decentralized user rewarding platforms.
Would love to discuss all of them in this post but i decided to talk about the project that looks a little bit more appealing and interesting.
Therefore i chose a project called Sapien today since it interested me the most. There is also another very promising project called APPICS that i wrote about a few days ago.
To check it out, click the link below.

What is sapien and what does it stand for? 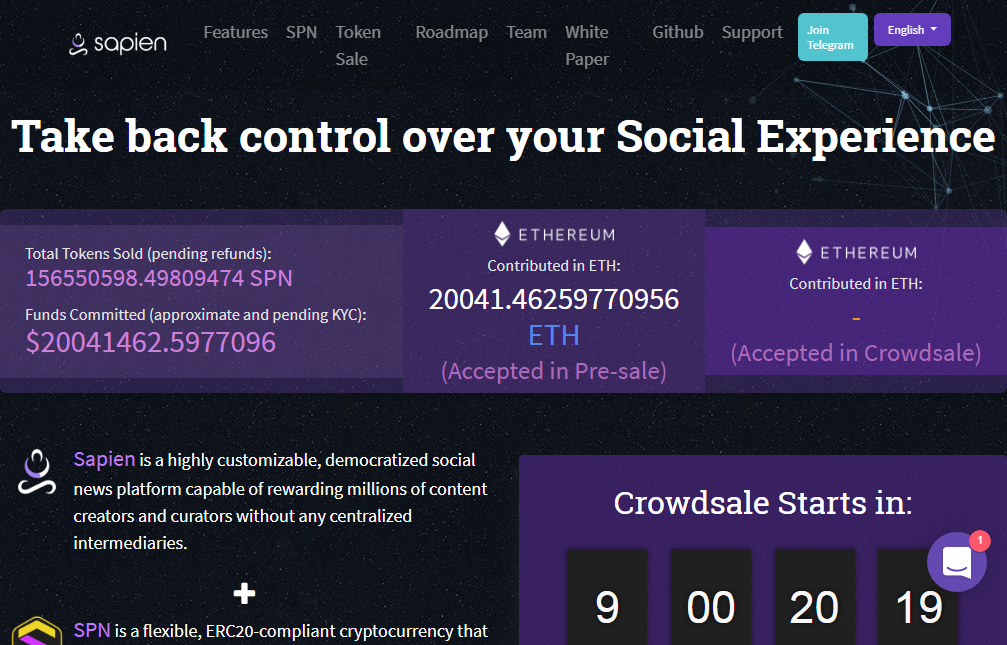 Sapien is a highly customizable, democratized social news platform capable of rewarding millions of content creators and curators without any centralized intermediaries.

In simple word, Sapien is a decentralized (meaning it has no central entity/individual ownership) social news platforms that rewards its users (content creators).
This platform has been built with Meteor.js, the recommended framework for
Ethereum Dapps (Decentralized Applications)
.
The official sapien website looks cool (my thought). Purple and black isn't that bad.
Anyway, the colours on the website are not that important. The most important thing is the things and real value that Sapien will bring to it's users.

Sapien will have a marketplace where users will be able buy and sell both physical and virtual goods.
The platform will also allow advertisers to advertise their products and services. Users will however have complete control over their relationship with adverts on the platform. Revenue earned from ad purchases will be distributed to Sapien users who have enabled ads.

Sapien is mainly meant for:

Sapien will also have a reputation score system probably similar to that of steemit.

There is no doubt that sapien is closely similar to steemit only that it is built on a different blockchain .
I got to read the official whitepaper and can't help it but congratulate the sapien team for this unique amazing project.

The competitive analysis below is according to the Sapien Whitepaper

COMPETITIVE ANALYSIS
I. Steemit
Steemit is another social news platform that rewards content curators and creators for posting, commenting, and
voting. While Sapien and Steemit both share a common goal of rewarding users’ time via a decentralized Blockchain,
the two differ significantly in philosophy and implementation.
a) Choice of Blockchain
Steemit is built on an independent Blockchain called Steem, which has been laden with controversies from the start. Steem developers unfairly “stealth” mined a large majority of Steem early on in the site’s development while giving the impression of equal opportunity.Sapien opts for Ethereum because of its strong community, remarkable technology, maturity, and transparency. And with the second biggest coin market cap and a more organic developer ecosystem, Ethereum has excited many with its potential to surpass Bitcoin. For these reasons, SPN will be built as an ERC20 token on the Ethereum network. We have not just decided to throw the Blockchain haphazardly onto the platform—it is an absolutely essential innovation that has enabled Sapien to have an immutable ledger capable of executing smart contracts and generating token payouts for our users.
b) Distribution of Power
Secondly, Steemit has tremendous disparity in the distribution of platform power. Only individuals who have been around since Steemit’s inception (also known as “whales”) have the ability to earn any substantial awards and, as such, possess a disproportionate amount of Steem power, enabling these users to selectively pick which posts become “winners” and “losers.” It is publically viewable that the top 247 accounts, most of which are held by developers and
friends, hold 87.5% of the Steem power on Steemit. For a site with more than 150,000 registered users, we believe that this level of inequality is not feasible nor sustainable in the long run. Sapien intends to learn from the innovations and shortcomings of Steemit to create a democratized social news platform. Steemit’s idea behind decaying and regenerative voting power was notable, as was its implementation of Zipf’s Law to fairly reward long-tail posts. To mitigate any possible disparity within Sapien, the largest SPN holder will have the exact same voting power as a
newly registered user. To minimize manipulation, voting power will instead be acquired as a function of how much reputation a user has earned through quality contributions on the platform.
c) Barriers To Entry
Lastly, Steemit faces significant obstacles to appealing to a broader market. Crypto economics are already challenging for the non-technical consumer. Steem further complicates this with three different Steem tokens: Steem Dollars, Steem Power, and Steem. Not only is it surprisingly difficult to understand the use cases of each, but the entire endeavor seems to discourage crypto novices from joining Steemit. The average user should not be required to have knowledge of crypto mechanics or how to optimize their token portfolio to maximize rewards. Our goal with Sapien will be to continually develop two parallel user experiences: one for the novice and one for the advanced user. For the novice, Sapien will automagically manage wallets, addresses, and two-factor authentication with a usability similar to that of Coinbase. Advanced users will have direct and full access to their wallet, along with various other metrics and customizations. By differentiating these two target users, the Sapien platform and the SPN token will be in the best
position for adoption by the most number of people.

The white paper also highlights Synereo in the competitive analysis. I will post about Synereo in one of my next posts. It is another unique decentralized platform that i have been using for some time now
However this is what the Sapien whitepaper says about Synereo.

That is one very interesting competitive analysis. Shows how ready sapien is to rival Steemit, Synereo and any other upcoming decentralized social media platforms.

You can read the whitepaper here The Sapien network is powered by tokens known as SPN tokens.
They are ERC-20 compatible Etherium tokens that content creators will be rewarded with on the sapien platform.
Any individual or company who wants to purchase an ads space on the platform will use the SPN tokens.
SPN tokens will also be used to buy virtual and physical goods in the marketplace on the sapien platform.
These tokens can be staked and unstaked. Inorder to stake SPN tokens, users can transfer tokens to a special smart contract with the help of ERC223 whereby this contract
will manage the staked SPN so that users can interact with the Sapien platform.

The Beta platform is live and anyone can head over to the Sapien website and register for beta.
For anybody who might be interested in investing in this project, i would like to let you know that the crowdsale will take place in 8 days and you can also sign up to be included in the whitelist.

What a waste of time!

I looked through the various pages, but did not find any information as to what kind of posts are acceptable. News and crypto-currency seem to be all.

Do I need to pay or am I given a small startup sum, as loan or gift. No mention.

Still, I decide to check it out by signing up.

What do I find? To sign up, I must either do it through FaceBook or Google? Really, this is a facade for the enemies of freedom?

Not in a million years.

#maxwell95 didn't you check it out before making this post?

Steemit exists BECAUSE both those organisations are trying to censor the internet and as our enemies, you promote them? I hope it was by mistake.

btw - where you were born, lovely country, but I have some horrible memories of it, but I was born in Nairobi.

Hello @authur.grafo...i did some research on sapien and didn't blindly post... :) Wasn't really promoting them either... The project interested me and i decided to make a post on it... I'm also thinking having other steemlike blockchain projects coming up isn't that bad. Competition is actually good...
Signing up on steem also requires you to use your google/yahoo email by the way so that is not an issue...This is only meant for account verification...

Sorry, but you are wrong. I do not have an email with either and it did not cause me any problems.

As for it being only for account verification: Oh boy, you obviously are not aware of how they are collecting our data...facebook even gave our data to China. If you want to comment on YouTube, you must sign in under these exact conditions. Why? Because they want your data. Why do you think FB bought whatsapp? Those who do not trust them, their photos and info is on whatsapp, so FB got them anyway.

It is not a case of competition. All these corps are losing their members by the millions: Face Book; You Tube; Google (everbody is trying to use alt search engines); Twitter. People are moving away because either they were blocked or censored. The alt media: Steemit; Gab.ai and minds are providing the same services, but without censoring ANY of their members.

I was not being nasty, I honestly consider it VERY important each person makes an informed decision about their future. Please go to alt news sites (and those I mentioned above) for you to know what is really planned for us and why I am paranoid about them (I even get angry when I see steemit opening a page and urls for facebook and google show up). At least I use ghostery, which stops them from tracking me (use it if you do not).