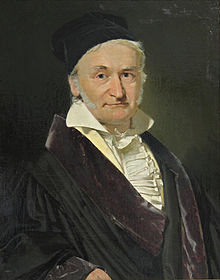 Sometimes referred to as the Princeps mathematicorum (Latin for "the foremost of mathematicians") and "the greatest mathematician since antiquity", Gauss had an exceptional influence in many fields of mathematics and science, and is ranked among history's most influential mathematicians.

then give me an upvote