Lieutenant Colonel Ron Arad (born 5 May 1958, presumed dead), was an Israeli Air Force weapon systems officer (WSO) who is officially classified as missing in action since October 1986, but is widely presumed dead. Arad was lost on a mission over Lebanon, captured by Shiite group Amal and was later handed over to the Hezbollah. 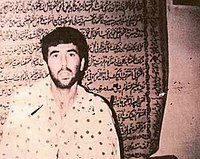