Victory Day is a holiday that commemorates the surrender of Nazi Germany in 1945. It was first inaugurated in the 16 republics of the Soviet Union, following the signing of the German Instrument of Surrender late in the evening on 8 May 1945 (after midnight, thus on 9 May Moscow Time). The Soviet government announced the victory early on 9 May after the signing ceremony in Berlin. Though the official inauguration occurred in 1945 the holiday became a non-labour day only in 1965 and only in certain Soviet republics. 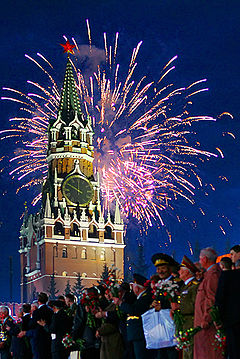 Victory Day celebrations in Moscow, 9 May 2005

In East Germany, 8 May was observed as "Liberation Day" from 1950 to 1966, and was celebrated again on the 40th anniversary in 1985. In 1975, a Soviet-style "Victory Day" was celebrated on 9 May. Since 2002, the German state of Mecklenburg-Vorpommern has observed a commemoration day known as the "Day of Liberation from National Socialism, and the End of the Second World War". In Israel, Victory Day on the 9th of May has historically been celebrated as an unofficial national remembrance day. However, in 2017, Victory in Europe Day (Israel) was upgraded to the status of an official national holiday day of commemoration by the Knesset, with schools and businesses operating as usual As a result of immigration of many Red Army veterans, Israel now hosts the largest and most extensive Victory Day celebrations outside the former Soviet Union. Traditions and customs of Victory Day are the same as in Russia, with marches of Immortal Regiments held in cities with large populations of Red Army veterans and their descendants.