April has been a crazy month for me and I'm here to admit that Steemit fell a little by the wayside. Between adjusting to a new shift dynamic at work, preparing for our annual live fires, and trying to get a jump-start on a couple of larger projects for mainstream publication with Camp Nano, I've struggled to keep up with developing content for Steemit.

With April behind us and the dawn of a new month, I'll be re-gearing some focus to be sure I produce content for Steemit once again. 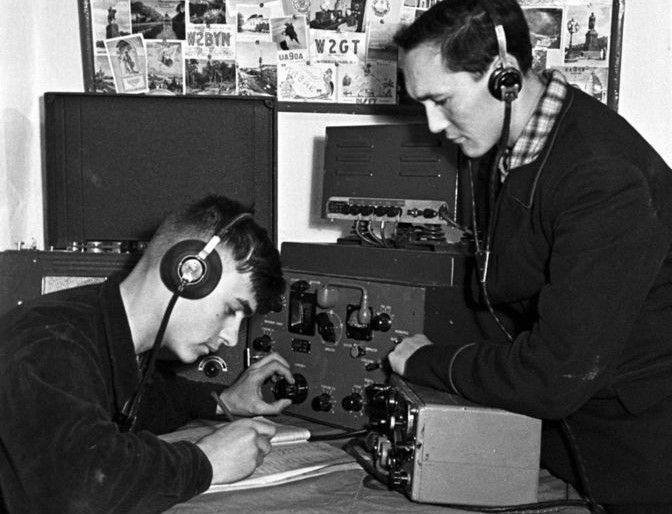 "Hang on, I think I'm getting something here. The signal isn't dead!" img source

However, one aspect of Steemit that hasn't been neglected over the last month is the community I've found here. I still keep plugged in to the awesome network of people at The Writer's Block on Discord. Several of us worked towards personal goals for Camp Nano and offered each other encouragement and support. I now have a decent start to a couple of science fiction pieces that I hope to build on over the next coming months.

But as for upcoming posts to the blockchain, I've got a few ideas ranging from short stories (perhaps participating in a couple of my favorite Steemit prompts like @thewritersblock art prompt or a #fiftywords short) a non-fiction piece on why I think tabletop games are fantastic, and some photography here and there. Of course, there is the whole climate of Steemit at the moment in regards to original creative content, particularly fiction. Writer's Block pillar and friend @GMuxx touched on this issue in a recent post of his, so head over there if you'd like more discussion on that topic. I 100% understand his decision and agree with the issues highlighted, which is why I may attempt a more blog-like aspect in my approach to Steemit. Matter of fact, it seems others at the Block have also taken this approach and it seems to be working out well for them (here comes the bus...) @Negativer being one example. Although, he still posts a lot of quality fiction as well.

I used to think I should make every post something fantastic. Not to say I'll be resorting to shit posting--I'll still strive to make each post something unique and quality. But, from now on, I'll be taking a more carefree approach to Steemit. I'm hoping that will encourage me to post more often, and about whatever the heck I feel like at the moment. I did come to Steemit for fun, after all.

Thanks for reading! As always, I look forward to interacting with anyone who bestows upon me the pleasure of their comment. And I mean a real comment. Not "nice post" or... well, you know them all by now.

As Shakespeare said so eloquently:

'shit post ye not, lest thy morals descend upon madness'

Morals? Are there still morals on Steemit? 😉
Some of us keep trying, don't we.

I really want to see more photography from you, Ak.

Thank you Bex. That is one aspect of my new approach: post photography without the self-imposed obligation to produce a large chunk of quality text to accompany it. I will venture into making posts with one or two photos and a short blurb. With photography posts, the photos ultimately should be the substance after all.

Exactly. When we're talking art type photos like you and I both play with, remember a picture is worth a thousand words. So just the photo is already the word count appropriate for a post. ;-)

I knew it! You've left Steemit and sold your account to a bot! At least I still know where to find you elsewhere on the interwebz.

Guess we better start flagging this account into oblivion...
kidding! Just in case the wild motherflagging bot armies get confused.

Ha ha! Someone had to do it!

I am in agreement with you, @aksounder. Taking a lighter approach is a good idea, particularly in light of the fact that the Steemit rewards are not commensurate with the effort. I think a lot of people are trying to sort out that very thing.

Like you, I am seeking a balance. The #fiftywords challenge project and writing flash fiction for writing contests have been my focus on Steemit for several months now. I am working on fiction for mainstream publishing separately. That’s neat that you accomplished a lot toward your goals with Camp Nano! That was great fun.

So in other words, I applaud your decision. It does take the pressure off. Of course even the shorter posts (even photography posts) take time. And that is always in short supply.

Thanks Jayna, and that really is my goal: to take the pressure of my own high expectations off. Until there's a hardfork that makes Steemit more condusive to rewarding origina, quality content (which is what drew me here in the first place) rather than a game of "who has the strongest bot army," I'll be taking a much more laid back approach here. #fiftywords is a perfect piece in that puzzle too--a very fun exercise in writing and editing. Thanks for taking up that torch!

I've had a couple other people echo similar sentiments. I don't feel the urge to spend hours on a post any more. It's too much work, and too much stress especially if you want to post daily or even every couple of days.

Exactly. And I would spend hours crafting posts.
I figured if steemit can handle you unbridled, I shouldn't hold back.

Ah, who am I kidding. You're still restraining yourself. A lot. I'll enjoy the pure doses of Negativer at TWB.

This is a “nice post,” but the comments are priceless. LOL!

These conclusions seem like a good segway to Steemhouse... just saying. There's been a lot more interest in mainstream at the block lately.

I hadn't read @gmuxx's post, but I have mostly been doing the same thing this past month—not spending as much time on posts. I've been kind of overwhelmed with life and so MIA from discord and the writers block. I've been keeping up my daily posts, but only by letting my haiku translation go for the time being and only doing these "random japan" posts which don't take me very long to throw together. So they are far from shit posts, but they also only take me a few minutes to do instead of the few hours those haiku translation posts could take.

Anyway, I look forward to reading more from you now that you are going to be posting more. Let's see some random photos from you! I want to spread this tag set idea.

I've seen some others taking up the "Random [insert location here]" posts. I actually thought about it a while ago--perhaps something I should consider again. Certainly looks like a fun way to make some unique photo posts, I'm just not too sure how many random things I really come across in my day that are interesting enough to photograph and share. I might seek some things out just for the sake of doing one of these posts.

Great to see you return to posting. I knew I followed you for a reason!

Like you I've suddenly realized that every single post doesn't need to be hung on the fridge like it's our legacy or something. Sorry about the resteem.

Hahaha, don't you dare apologize for what you do! Your resteems are a great compliment for all who are subject to them.

You put it very well: our posts don't need attention like each one is our legacy. Let's just all have fun on this unique platform.