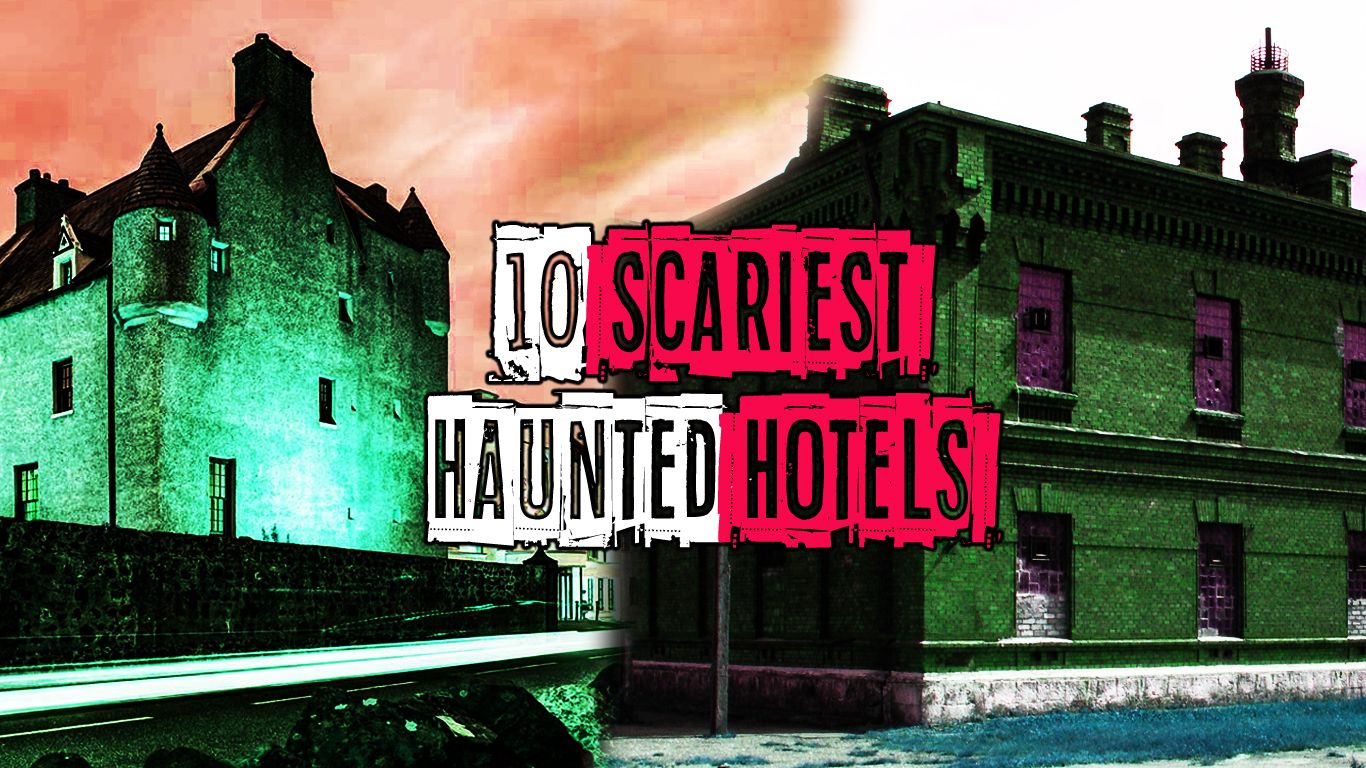 When you think of hotels, you most likely think of a place of peace, somewhere where you can rest your head and dream easily. However, sometimes those dreams become nightmares.

Here are the 10 scariest haunted hotels you don't want to visit. Situated at the head of Ballygally Bay in Northern Ireland, Ballygally Castle is truly a hotel from the past. It's the only structure in the country from the 17th century that people still reside in. Built by James Shaw in 1625, the castle remained in the Shaw family for 174 years, until it was sold by William Shaw in 1799.

During that time, several Shaws met their ends within Ballygally's walls, most notably Lady Isabelle Shaw, who died after she fell from an upper window while trying to escape the room in which her own husband imprisoned her.

Today, she haunts the hotel, knocking on doors and disappearing when people open them. Seemingly playful, she's been labeled by guests and staff as friendly, though feeling her cool presence before drifting off to sleep still gives many chills. While other ghosts also haunt Ballygally, the most eerie disturbance is the translucent green mist that often appears above the building. 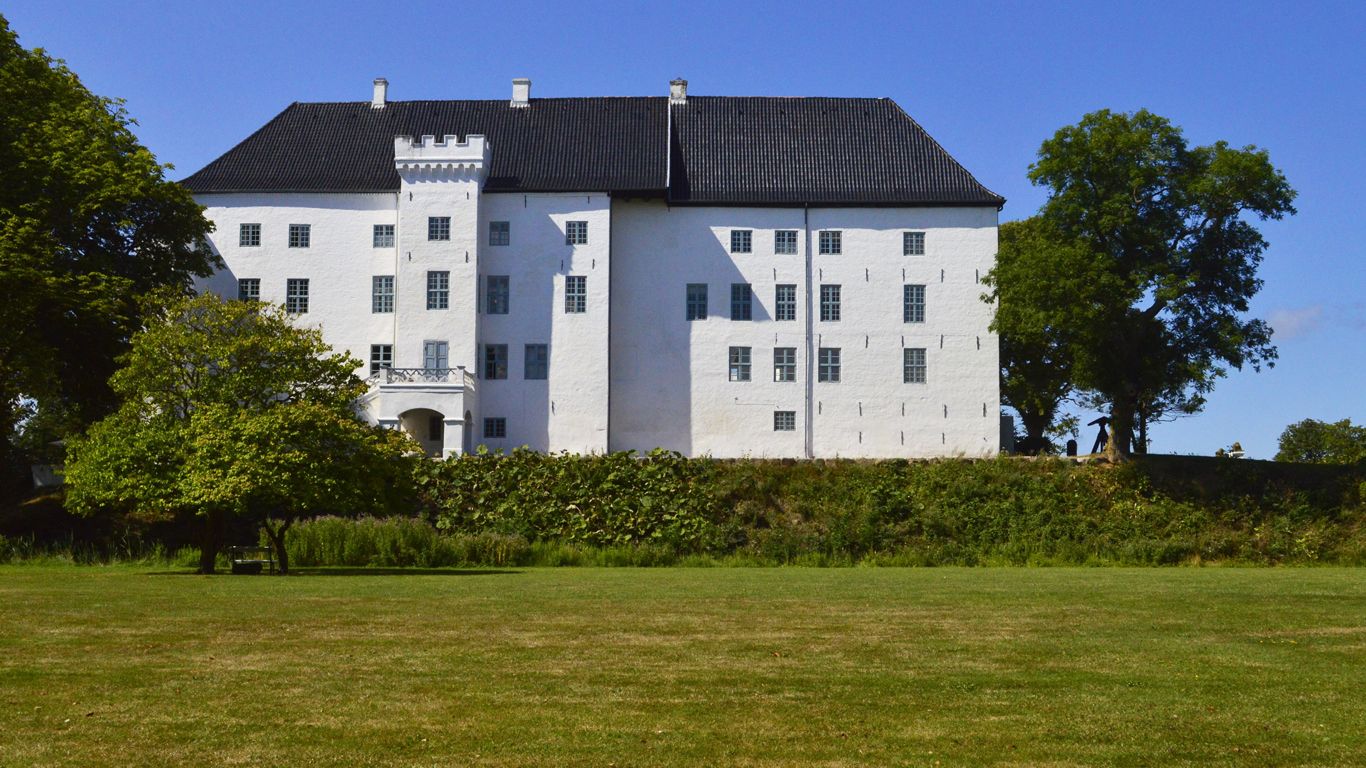 Constructed in the 12th century, Dragsholm Castle, better known in Danish as Dragsholm Slot, currently serves as a hotel for visitors in Zealand, Denmark. For a time, the castle was used as a prison for nobles whose actions insulted the king. Many of those who died within the stone walls are said to still be there, appearing as translucent entities, creating cold spots or moaning and chanting Catholic phrases.

There are three apparitions who appear more than any other, a mysterious woman in white, a similar woman in gray, and the ghost of James Hepburn, the fourth earl of Bothwell. Lord Bothwell died while chained to a pillar in the castle in April of 1578, and has since been seen riding through the courtyard with a horse and carriage. In total, it's believed that there are over 100 ghosts that regularly haunt Dragsholm Slot. Not exactly a place that you'd want to bring the family to. With a name like The Mermaid Inn, you'd probably expect this historical building to be fun and magical, with a warm, Atlantis-style feeling. Unless, of course, you're aware of the sinister history and the spirits that reside in it. Built in 1420, this hotel's ghostly occupants seem to have their own room.

In room one, a woman in gray and white garments has been seen sitting in a chair by the fireplace, and if anyone leaves clothing near that spot overnight, they will be found soaked the next day, despite there being no pipe or window nearby.

In room 10, there's the ghost of a man who enjoys startling people by walking directly through the walls. Then there's room 17, which contains the spirit of the wife of a gang leader who died there. At night, guests have reported experiencing extreme chills, even under covers, and waking suddenly when a rocking chair near the bed began swaying back and forth all by itself. 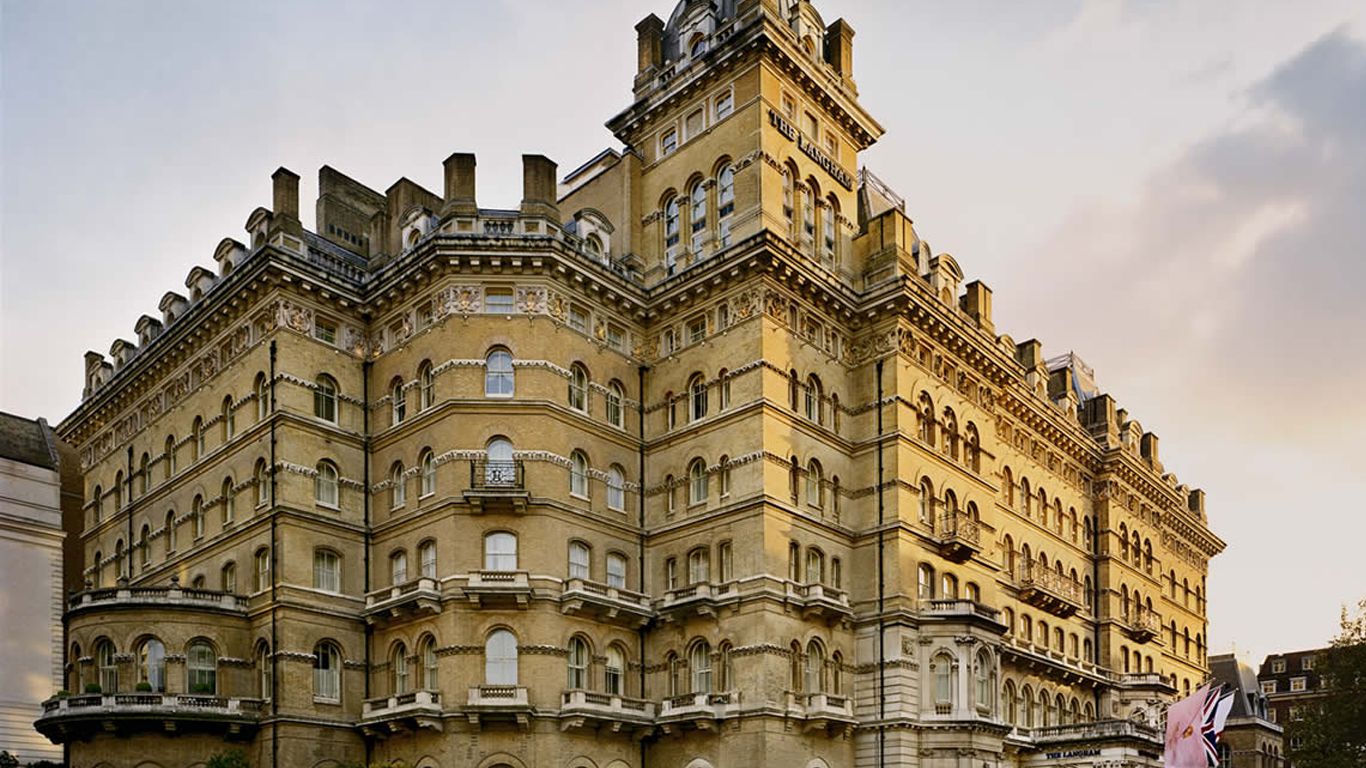 First opened in 1919, the Pensione Burchianti in Florence, Italy is a hot spot of paranormal activity. Originally owned by three sisters whose spirits still roam the hallways, this three-star hotel offers affordable luxury with a side of terror. Guests have reported feeling a presence watching them, experiencing sudden drops in temperature or cold spots, and even feeling icy cool breath on their backs and faces while in bed.

Several people have reported seeing a pink translucent apparition floating about while in the hotel's Fresco room, or a ghostly little girl giggling while she tries to play with them in the hallways outside their rooms. There's even multiple reports of ghosts laying on sleeping guests, with some waking up with extreme pressure on their chest. In one case, a woman woke to find a face's imprint on the cheek of her husband who was sleeping.

Pensione Burchianti is considered one of the most haunted places in all of Europe. Originally built as a theater in 1815, the Bourbon Orleans Hotel or Theater d'Orleans, as it was originally called, was a popular place on Bourbon Street and still stands in the French Quarter of New Orleans, Louisiana, United States. This hotel has kept much of the same style and décor from the 1800s and perhaps that's one of the reasons visitors seem to not like leaving, even after death.

Many people have died within the building and on the grounds outside due to yellow fever, duels to the death, and of course murder. There are dozens of ghosts that have been reported being seen there, but the most common Bourbon Orleans apparitions include a group of orphan children who lost their lives to yellow fever, a wounded confederate soldier who drags himself clumsily down the hallways, or a woman in a flowing gown, usually seen dancing in the ball room with an invisible partner, a stark contrast to the usually jolly feel of New Orleans. 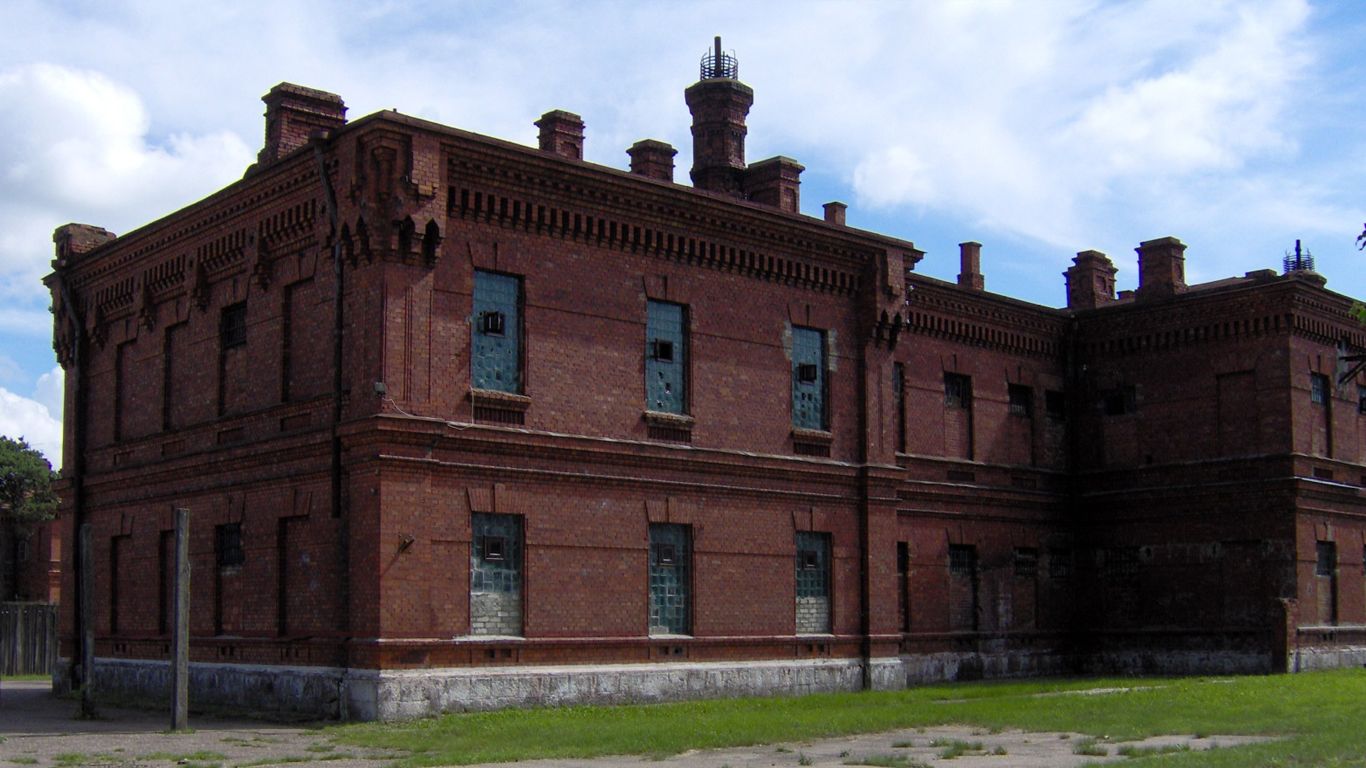 Built between 1890 and 1906 near the Baltic Sea in Latvia, the Karosta was a naval base and military prison that today serves as a historical hotel. Guests are literally treated as if they're prisoners of war and are processed as if they were in World War II, sleeping on cement floors and are unable to leave until morning. But if cold stone floors and harsh guards aren't off-putting enough, the complex is also one of the most haunted places in all of Latvia.

It's no wonder considering the thousands of prisoners and soldiers that lost their lives there, but the ghost that's most often encountered is actually that of a woman who hanged herself and spends eternity walking, blank-faced among the corridors. Multiple visitors reported footsteps being heard, doors opening and closing seemingly by themselves, and light bulbs being unscrewed by an invisible hand. This is a hotel truly not for the faint of heart. Originally constructed in 1888 and rebuilt in 1928, the Fairmont Banff Springs Hotel is nestled in among the Rocky Mountain range in Banff, Alberta, Canada. Widely considered to be one of the most haunted places in the entire province, many guests have experienced paranormal activity while staying there, and not all of it was harmless. Guests in room 873 were startled awake by the disembodied screams of a family that was rumored to have been murdered in that room, and it's said you can no longer stay in that room.

Then there's room 692, where a restless spirit is said to pull pillows out from under sleeping guests, and even push them out of bed when the mood strikes it. But the most famous ghosts are those of Sam Macaulay, a bellman who died in 1975 and still helps guests with their luggage, and the bride, a young woman who died on her wedding night and goes up and down the stairs, still in her white dress. 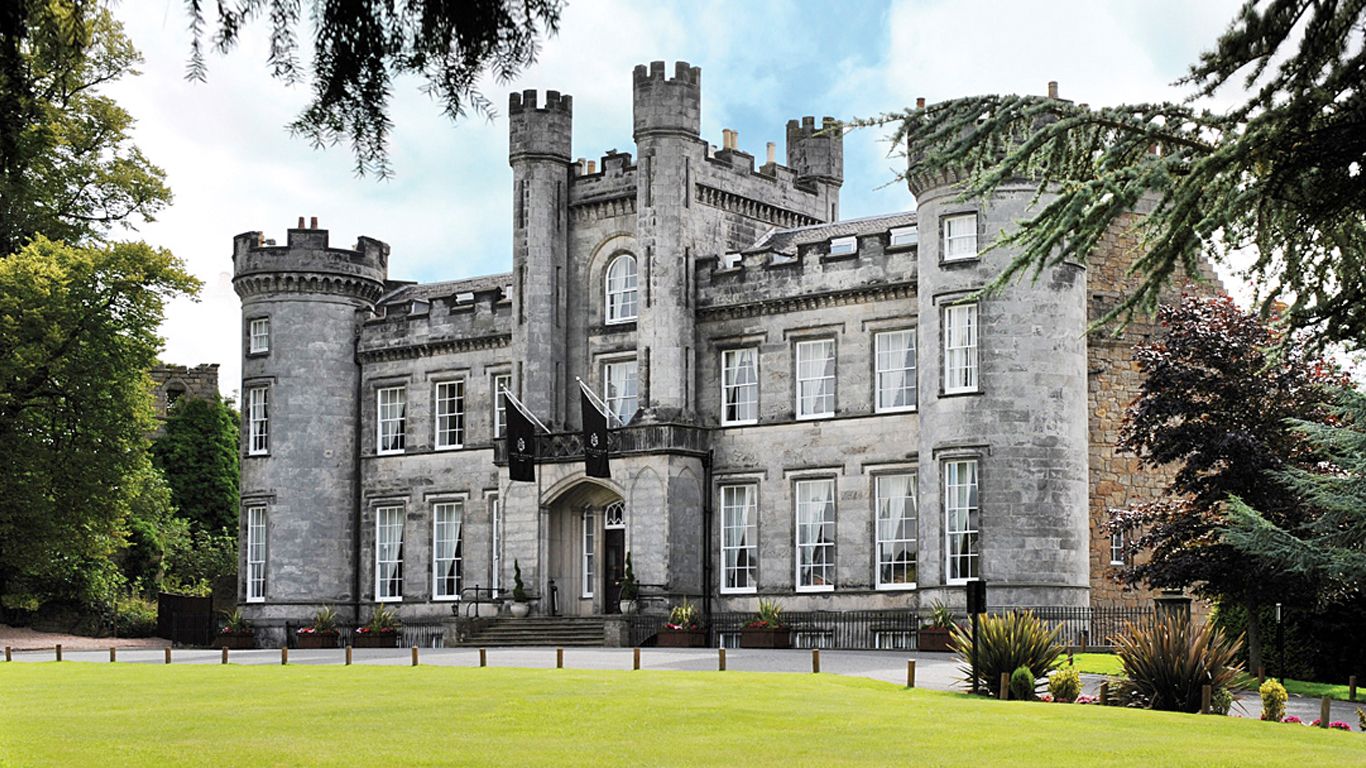 Airth Castle has a long history, dating all the way back to 1488, when its rebuilding began after a previous version was destroyed in King James III's defeat. Located in Falkirk, Scotland overlooking the village of Airth, this historical stone building, which was once owned by the family of Robert the Bruce, was converted into a hotel and event center.

But if you're planning on having your wedding there, you should be warned that a few uninvited guests have been known to pop up in your photos. An alarmingly large number of visitors have reported strange figures appearing in their wedding photographs, and many have heard or seen strange things happening at night while staying there. The ghosts of a nanny and two children, all of which died in a fire at the castle, are the most commonly encountered and guests in rooms 3, 4, 9, and 23 often hear the sounds of children playing right beside them while they sleep. Opened July 4th, 1909 in Colorado, the Stanley Hotel offers its guests more than a beautiful panoramic view of the Rocky Mountains. With 420 rooms, the hotel can hold a great number of guests, though some of them have never checked out. Fortunately for the living guests, the ghosts that haunt the Stanley Hotel are almost always friendly, though their sudden appearance and antics often terrify unsuspecting visitors.

The building's original owner, Freelan Oscar Stanley, can be spotted walking the lobby, even in the middle of the day, while his wife Flora has a taste for playing the piano suddenly in the music room. Elizabeth Wilson, the late chief housekeeper, will even unpack guests' bags if they happen to stay in room 217.

It's not surprising to learn that this was the hotel that was Stephen King's inspiration for the Overlook Hotel, the central location in his 1977 best-selling novel The Shining. Watching that movie will give you just a bit of an idea of how terrifying this hotel is. 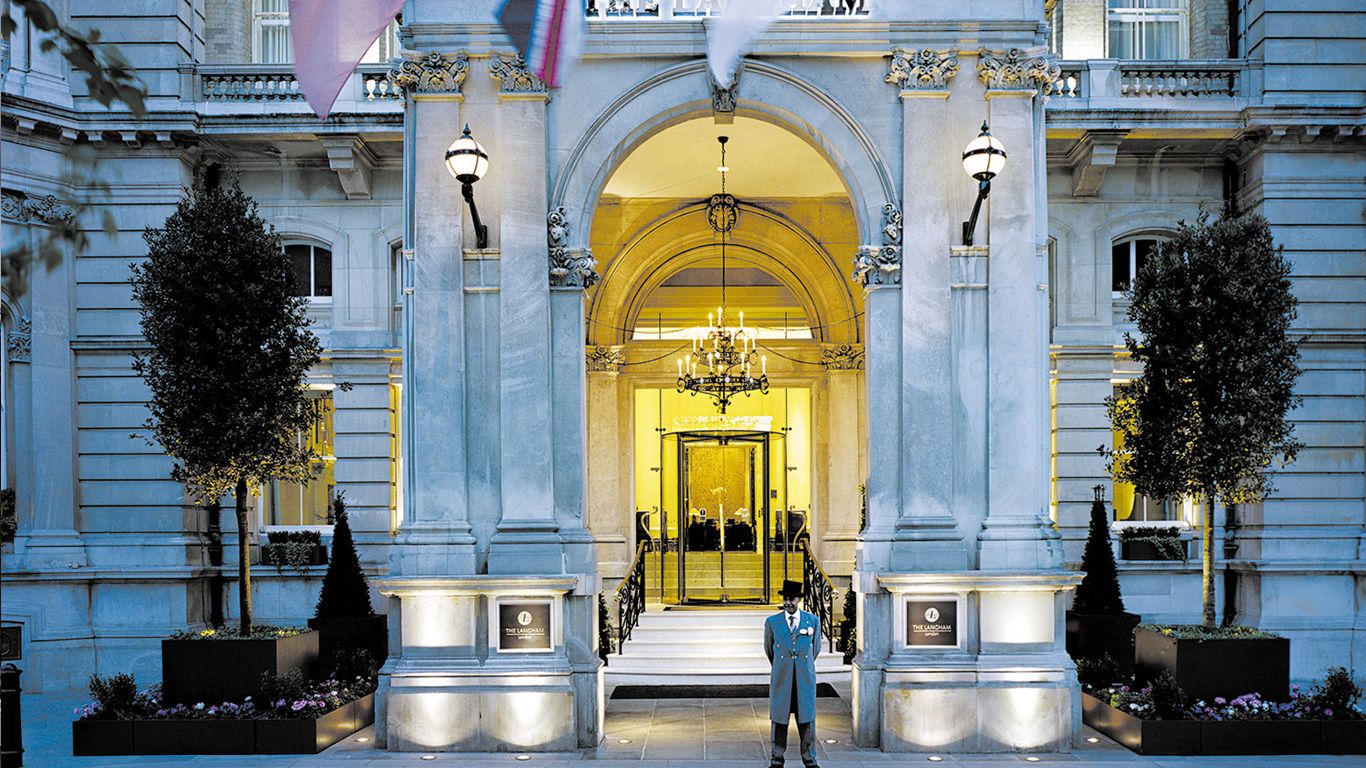 Considered England's first grand hotel, the Langham Hotel in London was built in 1865 and has a number of ghosts haunting it. It even boasts its own room, 333, as the most haunted hotel room in London, if not all of the UK. Spirits that call the Langham home include a doctor and his wife, who the doctor murdered in the building while on their honeymoon.

Another is a tall unidentifiable man with a large hole in his face. A poltergeist who wakes people by literally throwing them from their bed, and of course the most famous of all of the ghosts, Emperor Napoleon III. The doctor appears only in October and manifests as a silver-haired gentleman who stares with blank, creepy eyes, while Napoleon is only seen in the basement, and the faceless man sticks to the hallways.

But the most active ghost is a German prince who took his own life by jumping out of a 4th-story window and appears most often in the morning.

So if you ever want to stay in a hotel and be surrounded by unexpected guests, this hotel is for you.

But that's all for this episode, I really hope you guys enjoyed it.

I will see you in the next article.

10 scariest haunted hotels I DO want to visit The @OriginalWorks bot has determined this post by @padmakshi to be original material and upvoted it!

@reported has voted on behalf of @minnowpond. If you would like to recieve upvotes from minnowponds team on all your posts, simply FOLLOW @minnowpond.

Brilliant selection. Will be a good list for those, who are bored of ordinary trips.