Every atom dances on land or in the air
Realize well, like us, he circulates endlessly there
Every atom, whether it be happy or sad,
The sun's rotation is an unspeakable ecstasy

Shalawat is sung, the drums begin to bloom, the flute begins to blow. A group of dervishes wear a uniform attribute. The elongated hats, the big black robes, the white shirt that widened at the bottom like a skirt, and barefoot. They bowed and began to take off their black cloak. The position of their hands stuck to the chest, crossed the shoulder grip. In the midst of them was a Sheikh, who was the leader. Black robes he still wear. He took his place. Now it is the shaykh's turn to bow to his other dervishes, and they honor him again.

A group of dervishes then formed a line. One by one forward. After the leader gives his blessing, the ritual begins. Hands are still crossing over the shoulders. The bare feet began to close. Then began a slow spinning motion, with the heel of the foot being used as a pedestal in turn, while the other leg as a player. Slowly the hands are removed from the shoulders and begin to lift. The graceful hand movements gradually form a horizontal position. The right palm faces up, which is left down. The longer the movement gets faster, in tune with the beat of the rhythm that accompanies it. The spy looked even more wistful, partly closed. Their heads leaned more toward one shoulder. The quicker the rounds, the white skirts they wore grew just as perfectly as the open umbrella. Those people are getting late. Magical atmosphere as if created.
The drum has not stopped yet, ney (8) is still sowd. Without a signal from the ritual leader to stop, they will continue to soar in an ecstatic state.
The symbolically exposed position of the hand indicates that God's guidance is received by the right open palm of the right hand, then spread throughout the creature by the left hand. It represents a surrender and union with God.

The attributes are also a metaphor that holds meaning. The Maulawi hat-usually red or gray-symbolizes an ego tombstone, a black cloak as a symbol of the grave that when released symbolizes rebirth to the truth, the white shirt is a shroud wrapped in the ego, and ney represents the denied soul of the self, replaced by the Divine Soul. This reed flute also symbolizes the trumpet blown by angels on the day of resurrection to revive the dead. The red carpet occupied by the shaykh symbolizes the beauty of the sun and the twilight sky, which then adorned Rumi's departure forever. 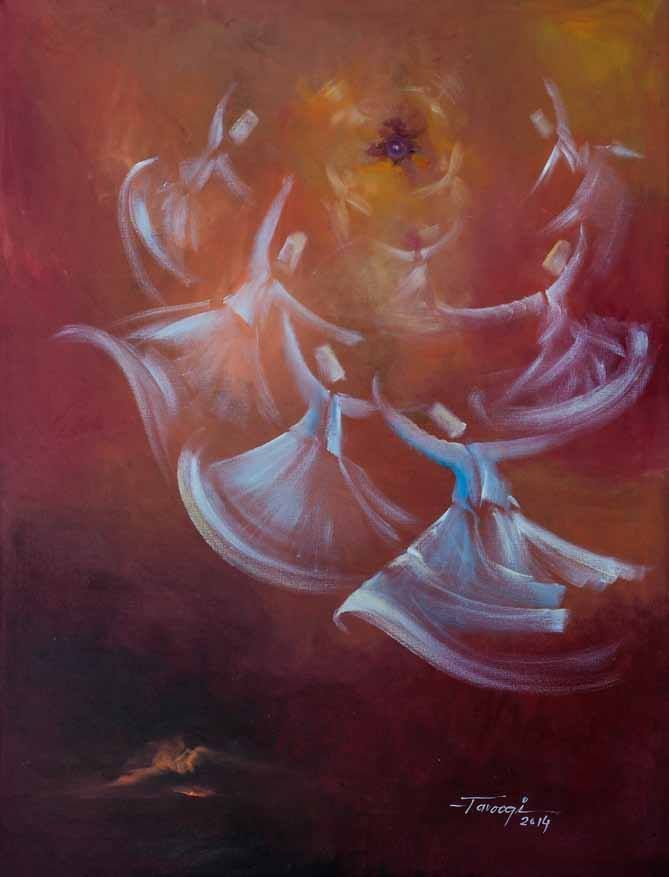 Jalaluddin Rumi strongly opposed too logic and senses in determining the ultimate truth.Which disease has infected the majority of the Muslims of that era.