Novusphere, A Content Sharing Platform for the Blockchain Age

Novusphere, A Content Sharing Platform for the Blockchain Age

In the never-ending quest to find a killer DApp -- the decentralized application that finally swings blockchain utility into the mainstream -- developers and investors alike have touted use cases both plausible and strange.

Predictive markets, blockchain kittens, markets for buying and selling time -- the list of quirky innovations goes on. Amidst the fray, however, something basic and utterly essential has been overlooked -- the enduring and global need for a censorship-resistant way to share information, media, and content.

Decentralized blockchains themselves can be censorship resistant if their governance structures are set up that way. Depending on what the rules for a given blockchain are, the freedoms permitted within them range from maximal to minimal. However, most blockchains have aims and infrastructure aimed at purposes other than censorship resistance and aren't ideal for sharing media.

Novusphere, a censorship-resistant platform for media sharing makes its intervention. Using the powerful EOS blockchain as its launchpad, Novusphere began as a research project in early 2017 to create an unstoppable and global content platform for limitless sharing between peers.

To get a better grasp on how Novusphere works and is different from anything that's come before it, let's take a deeper look at the context its been borne out of and how the network itself works.

###Global Internet Censorship Is at an All-Time High

Globally, the online censorship spectrum fluctuates wildly, with some countries, such as China, Iran, and others, being markedly more censored than countries such as Iceland, who have virtually no internet censorship laws or practices in place.

The problem is that not everyone is from Iceland, so the benefits of their lax internet laws fall to a small population while the rest of the world deal with at least some restrictions to their online freedoms. In 2017, thinktank Freedom House released their Freedom on the Net study which found that only 23% of internet users are free.

One thing the study doesn't take into account is that platforms in free countries such as Pinterest and YouTube implement their own self-governing censorship rules. The list of types of media that are disallowed from those platforms and others like them is already massive and grows with every passing day.

###Novusphere Is Building the Next Generation of the Free internet

Imagine a version of YouTube, Reddit, or Twitter that is governed by users themselves and doesn't have top-down rule structures influenced by special interests and corporate bodies. Imagine a web in which only its users have a say in what information is and isn't valuable.

Pulling the curtains back on the Novusphere reveals an elegant three-part architecture that delivers the user-built web, and it looks like this:

In practice, the Novusphere user flow goes like so: 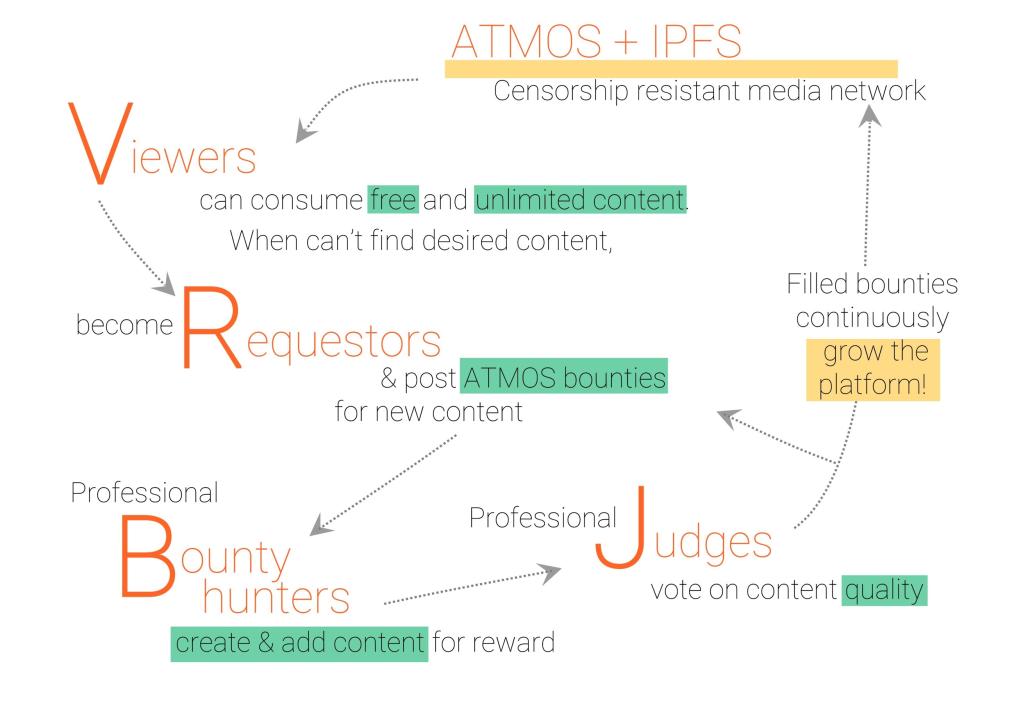 Rather than appointing a centralized cartel dictating what content goes in and what stays out, Novusphere-enabled platforms use the ATMOS token to maintain a censorship-resistant media ecosystem. Viewers can become requesters can become bounty hunters can become judges -- every user can inhabit a role in the network on equal footing and necessity with the other.

In this sense, the Novusphere is a symbiotic network of shared information that is creating a horizontal power paradigm necessary for the realization of the web 3.0.

For more Information you can go to https://Novusphere.io
Public Beta: https://eos-forum.org

Novusphere is going to be awesome, wait till a UI and all these features get organized.