Archaeologists have made an incredible discovery

When the experts opened a 300-year-old coffin, they discovered a body in perfect condition!

What happened next remains mysterious and the archaeologists began a search.

The grave was excavated on October 10 at a construction site in a two-metre deep hole in Xiangcheng, Henan Province of China.

There were three coffins in the grave. Two of the coffins contained remains of bodies reduced to skeletal remains. The third coffin housed a mummy whose body was unusually well preserved.

The clothes of this 300-year-old mummy indicate that it was a very old official of the last Qing dynasty (or Tsing, a dynasty of Manchu origin who ruled China from 1644 to 1912). The abdication of the last emperor, Puyi, at the age of 6, made the subject of a film, NdT).

When the historians opened the coffin, they said that the human face was almost normal but in the hours that followed, it began to blacken and give off an unpleasant smell.

According to Liu, a witness living in the grave area,"the mummy's face was black, but the features of his face were clearly visible. He wore a dress from the Qing dynasty and a long braided ponytail, typical of the hairstyles imposed on the Chinese during the Qing dynasty. His head rested on a stack of white cotton cloths."

At present, the way to keep such a well-preserved body for 300 years has not been clarified.
According to Dr. Lukas Nickel, a specialist in Chinese art and archaeology at the University of London,"the Chinese did not do any treatment to preserve the bodies as practiced in ancient Egypt, for example. They tried to protect the bodies by putting them in imposing coffins and stabilized tomb chambers. The integrity of the physical structure of the body was therefore important to them. In ancient China, at least, it was assumed that the deceased person continued to live in the grave.
If the body were placed in a lacquered coffin, covered with charcoal, which was common at the time, the bacteria would have been unable to penetrate.

Dr. Nickel adds that if this were the case, as soon as the body is in the air, the natural process causes it to darken and decompose rapidly.

Historian Dong Hsiung proposes a different theory for the preservation of corpses. "It is possible that the human family used certain processes to preserve the body, but once the casket was opened, the natural process of decomposition could actually begin. We are working to understand and safeguard this knowledge.

However, this is not the first time that perfectly preserved mummies have been unearthed in China. In the late 1980s, several well-preserved mummies were discovered in the Taklamakan desert. It is estimated that mummies are at least 3000 years old. The bodies reveal that these people had long blond-red hair,
European features and that they did not seem to be the ancestors of today's Chinese. Archaeologists now believe that they may have been citizens of an ancient civilization that existed at the meeting point between China and Europe.

Mummy found in the Taklamakan desert
The Qing dynasty and the Ming dynasty that preceded it are renowned for their well-preserved bodies. In 2011, it was lucky to discover a 700-year-old mummy in excellent condition in eastern China. The mummy was wearing the traditional costume of the Ming Dynasty and in the coffin were bones, pottery, ancient writings and other relics. 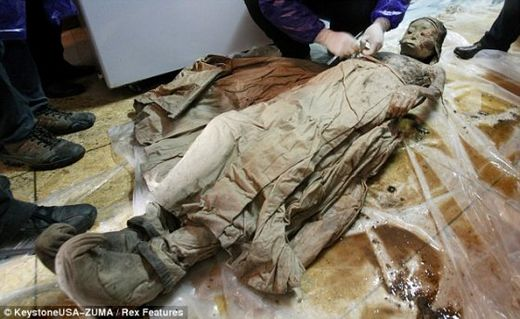 The 700-year-old mummy discovered in 2011
Taizhou museum director Wang Weiyin said the mummy clothes were mostly silk, with some cotton.
The researchers hope that the latest discovery could help them better understand the rituals and funeral customs of the Qing Dynasty, as well as other body preservation information.

Congratulations @renardo! You have completed some achievement on Steemit and have been rewarded with new badge(s) :

Congratulations @renardo! You have completed some achievement on Steemit and have been rewarded with new badge(s) :

Hello. Today you have been on Steem for one month. You have contributed at least one post in CN community. The Welcome Center for New Steemians is having a celebration for you. Welcome to CN community. Looking forward for more high-quality posts from you in the future!