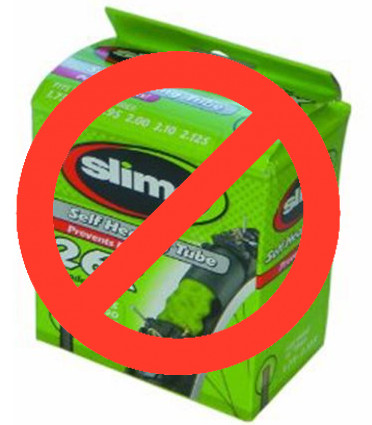 Part one of a new series maybe. Don't Buy This Shit. Catchy, no? Alright, what the hell is today's topic?

This is a Slime brand bicycle inner tube replacement. Slime is a pretty well known brand by now, you've probably seen their bottles of green shit they're selling, advertising as a "self-healing" fix-a-flat deal. The idea is, you squeeze this crap into your tires, and whenever something pokes a hole in it, the air will push the green goop out forming a seal

In theory, great. In practice not so much. Does it actually do what it advertises? Sure it does, with a whole lot of caveats

For one it will only seal holes that appear in the tread portion of your tire. Sidewall gashes and you're out of luck. Secondly, it's only going to plug up a tiny hole. If you run over a glass bottle, you're pretty well screwed. And thirdly what they don't tell you, is their shit isn't intended to be a permanent fix. The stuff that comes out isn't a glue or adhesive and you aren't meant to drive around on it for days. It's meant to allow you to get to a shop and repair or replace the tire.

And now they're sticking this shit right into a bike tube and selling it to you. So what's the problem, Lemonshrimp? Don't you want self-sealing tires for when you're biking around and drive over some construction debris that seems to be everywhere on the side of the roads nowadays? Yeah sure that's great. In Theory.

The real problem is it doesn't work FAST enough to be in any way useful. Your tire will be plugged but your tube will be flat. At that point you're going to need to have a bike PUMP with you, or you're boned anyways. And if you're carrying around a bike pump, you might as well carry a patch kit as well. Lo and behold you can just FIX the damn tire when it happens instead of it "Self-Healing" and leaving a bunch of green gak all over everything in the process

It turns black when exposed to the air for a while too. Get it on your hands and under your nails and it's pretty nasty. Not to mention that it's not just "Slime" as they market it. It's also carrying around fibrous shit suspended in the green liquid that assists in creating the flexible seal they're so damn proud of.

In any case that's not the main issue I have with the product. The problem with these particular tubes is that they put this Slime into the WORST QUALITY inner tubes that you can get. Within 3 days my tube developed a leak. Of course it wasn't due to anything I had run over, Oh No. I got this leak for free with purchase. This leak was on the inner side of the tube. Meaning that the tube itself was defective from the manufacturer.

Fine, I'll just patch that fucker and be on my way. Nope a day later I was flat again. This time that slime was everywhere because the hole was torn wide right down the seam of the rubber. On the inside yet again.

Fine, I'll patch it again. But this shit is going in the garbage if it happens aga..

So yeah. Slime tires can kiss my ass. They charge a good 50% markup on this trash product and I never even got to see it perform its magically purported self-healing once.