Where Will Kyrie Irving Go? - CONTEST TO WIN SBD!

sportsenthusiast (49)in #contest • 4 years ago

So a lot has happened for the Cleveland Cavaliers in the last few days. Before I get into the contest rules I want to give you all some background information.

Sources confirm Kyrie Irving requested to be traded quite early, right around the time Jimmy Butler was actively being shopped by the Chicago Bulls. Cleveland convinced Kyrie during that time that Butler could potentially join him... But as we all know he ended up going to the T Wolves instead. Now we have a confirmed report stating Kyrie would like to go to either New York, Miami, Minnesota or San Antonio. I think any of those teams with Kyrie Irving becomes an automatic playoff team and maybe even championship contenders. Plus the rivalry with LeBron next season will be amazing to watch!! Can someone say drama or what? This is very similar to the KD - Westbrook situation last season... I swear the NBA can be like a soap opera sometimes haha. 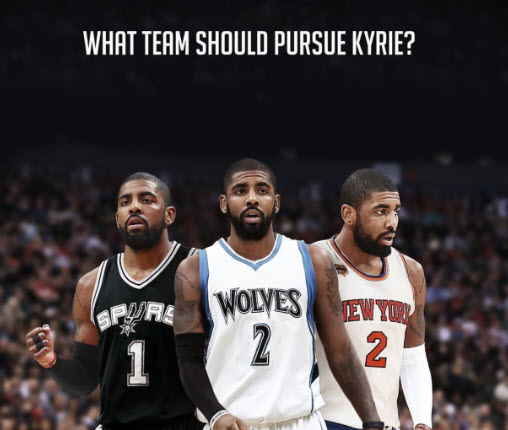 Simply put... LeBron will stay in Cleveland for the upcoming season. This is not a big surprise since its what we all expected anyways. Maybe he's sending a message to Kyrie and the entire league that he wants to try one more time with Cleveland?

Right on cue. Cavaliers sign Derrick Rose for an absolute steal. They got him for $2.1 million for only one year. With today's salary cap this is actually an amazing pickup considering he's a former MVP. Who knows how he will do under King James' veteran leadership? I know everyone wants to see Derrick Rose play a full season healthy but maybe in this backup role he could do better than before and tap into his MVP days. If the Kyrie deal does happen we will be due for a Part 4. This will require you to correctly predict the Kyrie Irving trade in order to earn the SBD from this post. You must have the most accurate prediction so more details could work to your advantage/disadvantage... You decide. Please see the example below.

If Kyrie gets traded to New York for Melo only User 2 will win the SBD because he provided more specific details in his prediction. If no one guesses Kyrie's fate 100% accurately (which is likely as well) then it will be rewarded to the closest prediction.

Just for fun I did my own prediction of where Kyrie will end up too.

What's more exciting than that? A four way trade? A three way trade happens between Cleveland, Phoenix, and New York. Bledsoe and Melo end up in Cleveland. LeBron and Melo finally get to team up together as they always planned. New York gets Kyrie Irving who gets to team up with Porzingis AND he gets out of Cleveland. Phoenix gets some draft picks. I read about this on Twitter... And the more I think about it the more it makes sense. There are a lot of rumours out there though so who knows what will happen. Him wanting to leave publicly is quite surprising itself.

I'm looking forward to hearing your predictions on where Kyrie will land. I will also be upvoting the more creative trade predictions!

Kyrie Irving stays with the Cavs.

Interesting... You're on the same boat as quite a few people. I figured you'd be rooting for Kyrie to come to the Spurs!

24 hours are up and I'm officially closing the contest. The below candidates are eligible for the SBD:

If Kyrie does end up staying... I will need a confirmed post from a credible source that he is in fact staying. Contest runs until we hear somthing about Kyrie!

Kyrie doesn't get traded. The Cavaliers want to see if a lineup of Irving, Rose, Lebron, Love, and TT can make some noise. If performance is worse than expected, Kyrie is moved by trade deadline next season.

Good prediction! I don't know if this will happen though considering Kyrie's comments... Apparently he unfollowed LeBron on Instagram as well!

This is probably the best outcome the Cavs can get. This situation is eerily similar to Kobe's trade request in 2007, which never happened. And remember what happened afterwards? Well, several trips to the Finals of course haha.

The only thing that might really force the trade is if the relationship between Irving and James was actually significantly damaged. We really can't know that, nor does the media. But I suppose time will tell us :)

I actually am excited about the Rose deal, and playing with James and coming off the bench might just give him Sixth Man of the Year honors (I'm optimistic, clearly lol).

@kccrypto Am I going to see a prediction from you too?! Let me know what you think will happen to qualify for the contest!

Haha, yeah! It took me a while to type it up because I was doing some transacting on this wonderful red day for crypto 😂

I agree 100% - this situation reminded me exactly of Kobe and the Lakers. The Cavs management will hopefully get Lebron and Kyrie in a room together to hash it out

Interesting! Cavaliers are in decent shape then... Melo and Beverley are good adds!

I would love that trade for the Cavs as well. Big fan of Beverly, and perfect against the Warriors.

Yeah he is an amazing defensive presence! That would give the Cavs a pretty good shot

Kyrie gets traded to the Suns.

Not really sure how confident I am about this guess, but I'd love to see Love with the suns, and I think Bledsoe could be good with the cavs. I personally think Melo is overvalued, but I know people are hyped to see Melo and LeBron play together.

Cavs need to make some big moves fast, and Irving is obviously unhappy. Cavs need to trade for everything they can, and more importantly pieces that make LeBron happy (like Bledsoe). If not they could end up with Irving and LeBron both gone.

I think theres a chance the Cavs can get what you suggested simply by offering Irving. If they also lose Love in that situation, they get a lot worse. I'm not opposed to trading Love in a separate transaction, though.

I would love for the Cavs to get the deal you mentioned between the Suns-Knicks-Cavs. However, I'm just skeptical the Suns would pull the trigger on that because they really don't get much in return. The Suns are such a young team, and I think they really value Bledsoe's veteran leadership at the moment. BUT, if the Knicks are willing to send Franky the Frenchman to the Suns in addition to a draft pick, then maybe that trade goes through.

In my opinion, Bledsoe (a fantastic two-way PG) + Melo might make the Cavs better against the Warriors.

SO, long story short, I am going to second your opinion with a modification. And let me also preface it: I think it is also possible that no trade happens and everybody involved is forced to suck it up. But because this whole post was to make a fun prediction, I'll do it.

I like this prediction! Very similar to mine and can see Bledsoe teaming up with LeBron!

I think i mention in one of your previous posts that he will not be traded because he will not leave and he will win one more champion ring next season with Cavs... So this is my prediction. I know few of his remarks generate a lot of noise in the last period and its great to see so many reactions around but i think that he will stay! Not only that... Cavs will be the next champions!

Wow! Another prediction that he will stay with the Cavs. This is very interesting. A lot of people think he won't go anywhere.

And this is what is going to happen as well... so to save time you can reward us from now hahahaha....

As a Cavs fan, I hope you're right, @georgemales! Haha.

Exactly... time will tell! But i will suggest to put the champagne on time to be cold as we will have reasons to celebrate!

I think he move to New York and finally come better days for Knicks :)

Ouch. That'd be terrible hahaha. The curse of the ROSE, huh?