Behind The Scenes of Papa-Peppers Selfie Challenge Day #25.....POWDER POWER As the darkness settled on some and dusk ensued for others, the gallant knights of the Selfie Challenge did await a reading from the scripture of the Pepper. A cold sweat formed on many brows as the time spoken of only in whispers approached….the time of the Quick Draw. A brief flash of madness where only the hardiest souls survive and then, like magic….it is gone.

And so it was…. that on the day of our selfie pepper lord, day 25 @papa-pepper did say unto his selfie flock:

”Take a selfie of yourself blowing out some kind of powder!” 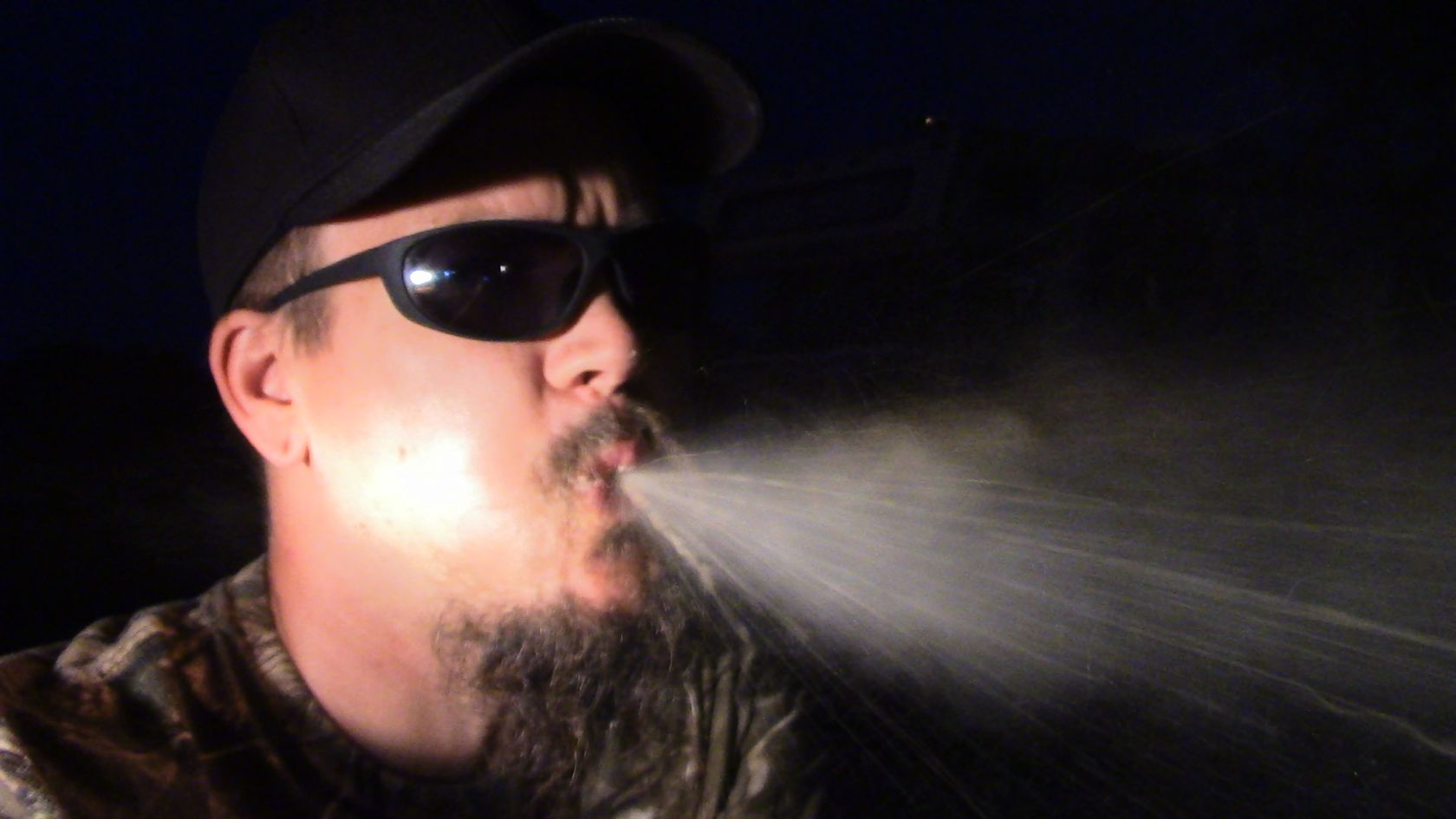 The “Powder Power” challenge had been thrown, much like a steel gauntlet, but less painful since well….it’s not a fist of steel and all. Our warriors unsheathed their weapon of selfie destruction, as did I. Wielding my sharpest Samsung my keen eyes roved over the kitchen looking for some powder I could expectorate from my gullet. Alas, I saw little as to be honest, I don’t really know where half the crap is in there.

HOWEVER, a true warrior never surrenders and ALWAYS strives to win. As such, I embraced a credo from my past “pain is only weakness leaving the body” as I grabbed the baking soda in the fridge and headed to the sink. While I would be surprised if anyone has ever really wondered what it would be like to pour baking soda in their mouth, in case you have I can tell you….DO NOT do this….it is a mistake….no good can come of this….etc.

Not only is it quite unappetizing, but it also kind of sucks your mouth in like eating the sourest candy, that tastes like dirty socks, times 10. It was a wonder I was even able to get any powder out as it was everything I could do to even exhale. Never the less, a picture was taken and uploaded. Know this dear readers, while hardship was suffered and grossness was had, winning would make it oh so sweet. 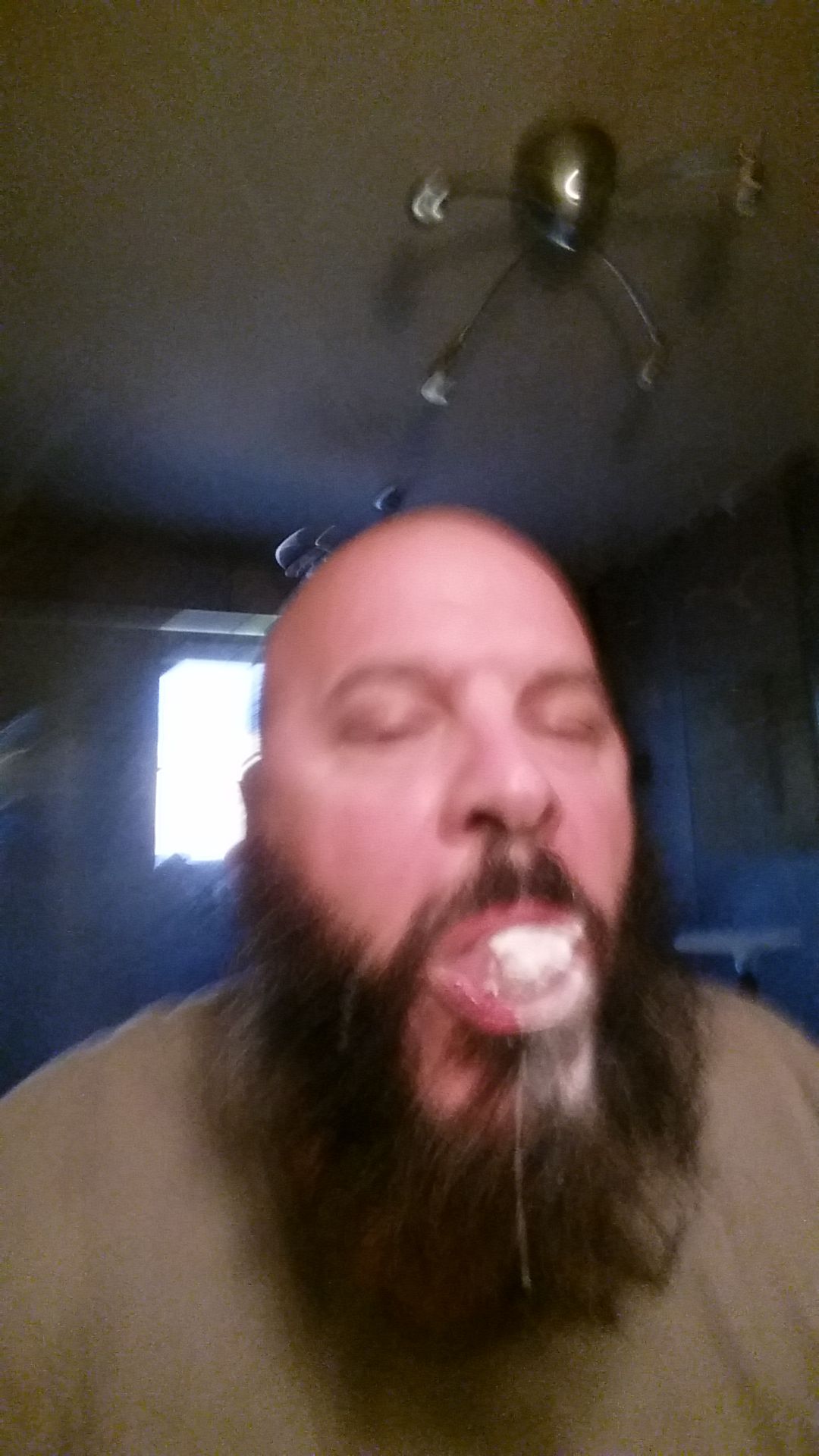 And so it was that deliberation and research would ensue. Spitting powder seemed a difficult challenge to make look cool or unique. Since basically people were spitting. So I began my research, as I watched my fellow selfie combatants’ powder their screens. This seemingly easy task would not be as easy as expected because of the simple fact that….most people’s pics looked like they were on their way to worship the porcelain god….and didn’t make it. Much like the revelers of many frats at 2am, much like Linda Blair in the Exorcist….it looked like a lot of projectile vomiting was happening on Steemit. How the hell are we supposed to make that cool???

The wily one known as pepper seemed intent on robbing us of our cool, or pushing us to new heights. As I saw more and more pics of the up chucking variety, I wracked my brain for ideas. Lo and behold I came upon an idea. Having done several water shots, freezing the waters action, why not do the same with powder? Researching the best way to shoot it I found that it was lucky I hadn’t balked, as night is the best time to get the shot.

This is because lighting the powder is very important and doing it at night is easier to do. With the water I used the sun to light it, but with a white powder, backlighting it would show up with much more impact on a black background. Now the game was afoot. First I either needed to find a better powder or go buy some, because hell if I was using baking soda again, nuh uh.

As luck would have it, once I got to searching I found several options. I decided to go with flour due to how fine it is, thinking this would give me better dispersion. Now it was time to get the rest of the tools I would need for my plan, set up the shot, and do some testing. The tools of my trade this night? 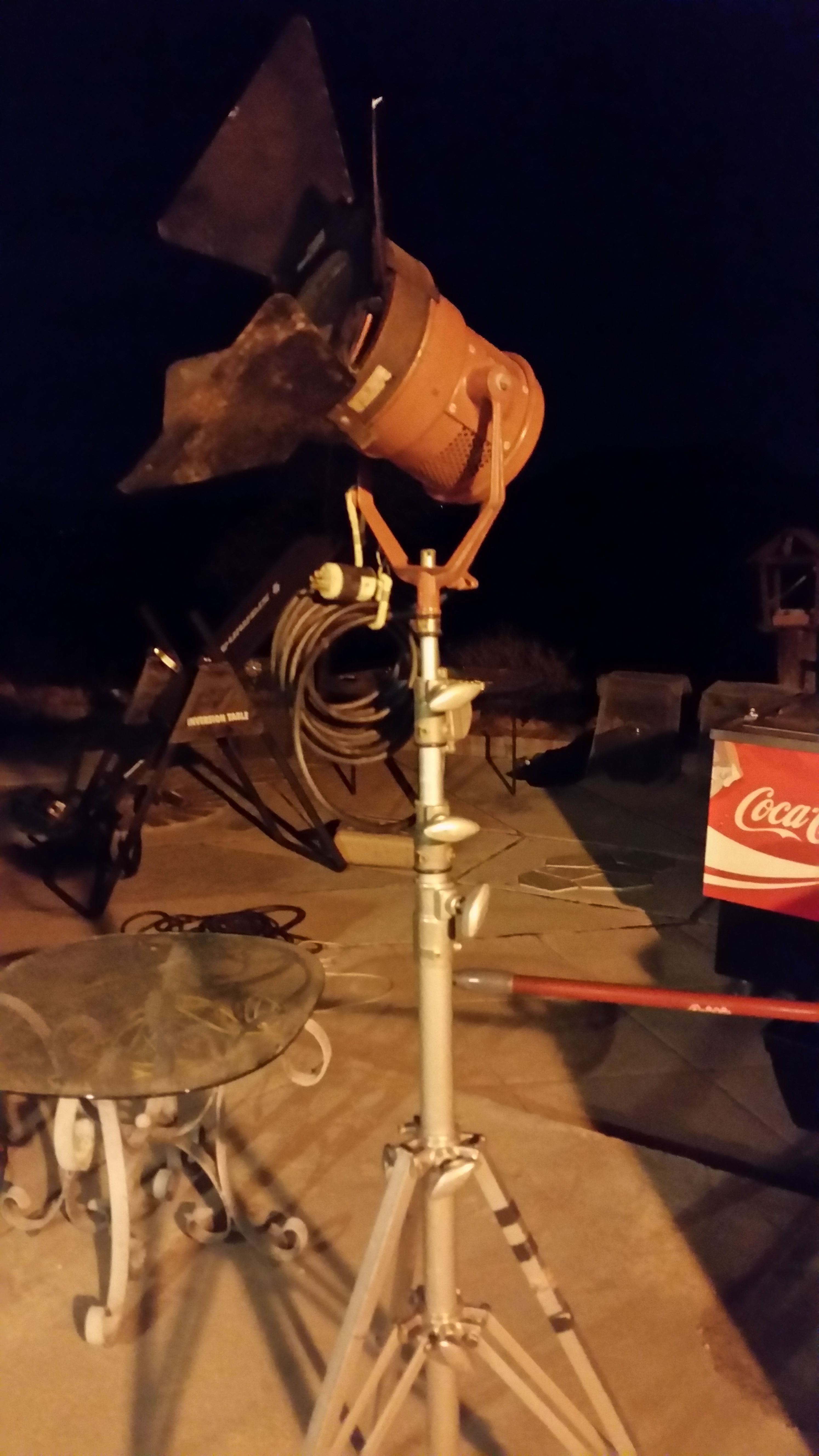 Now that I had my tools, I needed to set up my weapon of mass selfie-struction….namely the camera. Tonight I was gonna need the big gun, the Canon T5i so I could stop the powder motion. With weapon and tools secured, it was time to get busy setting up the “powder room,” or in this case the powder patio since I needed to point into blackness, but not worry about making a mess. A quick look gave me my position and it was on.

First I positioned the camera pointed into the nothingness of the liquid black night. Next, I needed to position the backlight and do some tests to make sure the powder would pop up into the light correctly. To do this I used a spray bottle of water. In my work in the film industry I am often doing fights, both hand to hand and gunfights. As such, often the blood will fly. In scenes at night or even in the day, the best way to make the blood stand out and “pop” is to “light the blood.” Since we don’t need a mess everywhere….a spray bottle of water does the trick and I figured it would work for this as well.

Not too shabby, but it did reveal an issue that required one more tool. To get the framing right, light in the right place relative to me standing, I was going to need to hop up on my trusty step ladder. No big deal. As everything fell into place, it was time to see what the powder would look like in the light? Would I be able to catch it with the timer and high shutter speed? Well….only one way to find out. 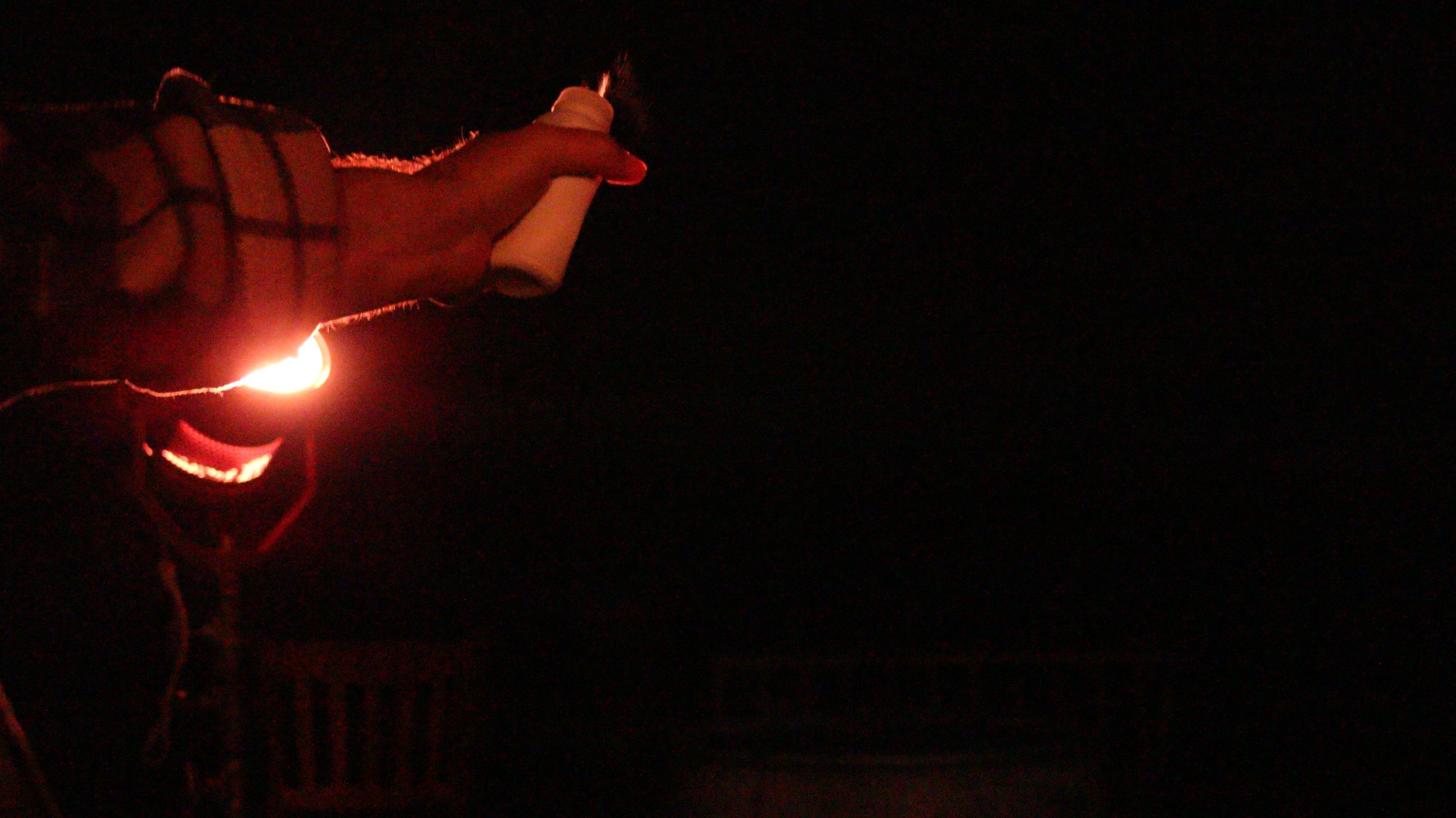 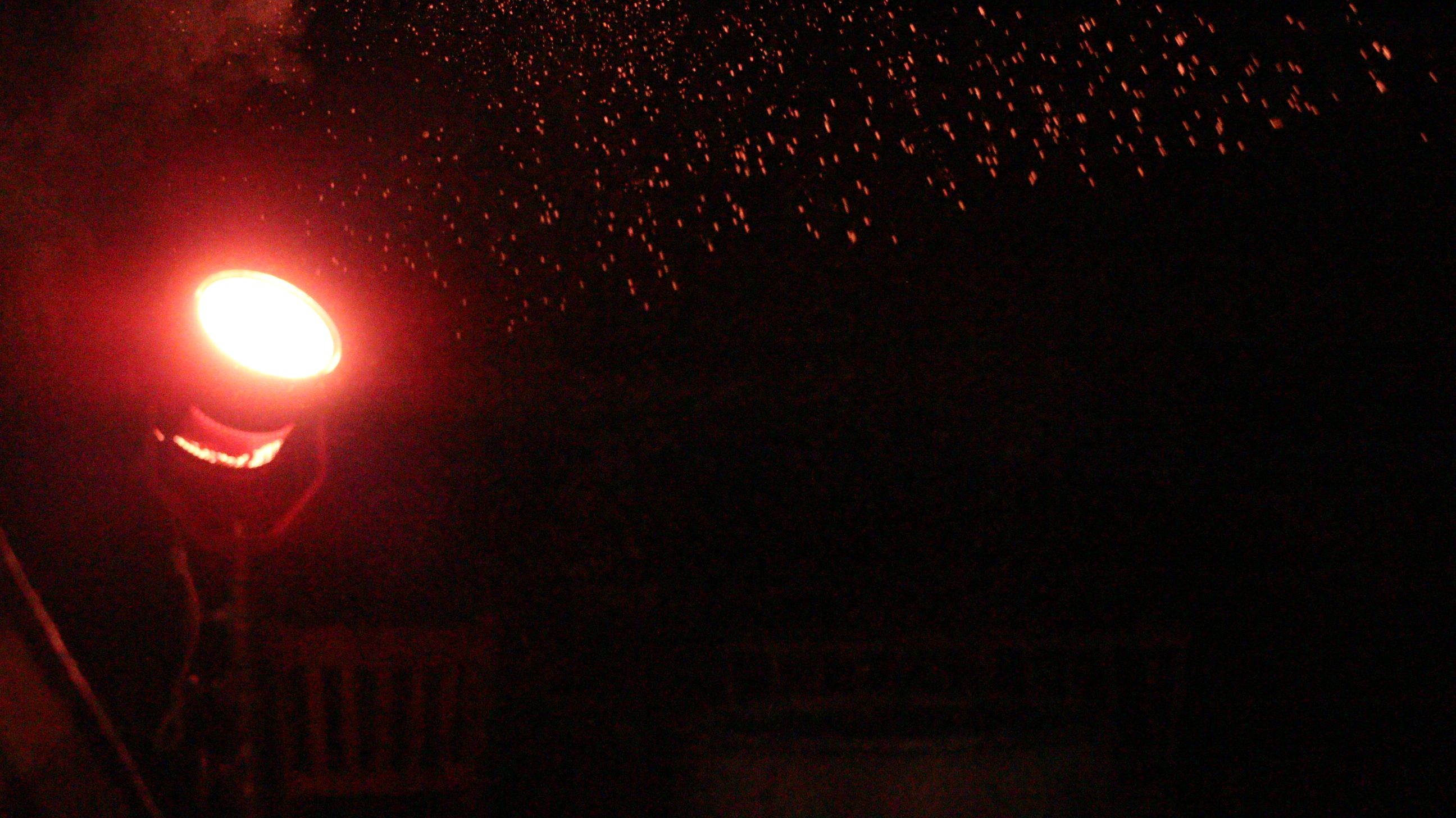 Close enough for government work, which really isn’t saying much. Those of you that ever worked in the government know what I’m saying here. But at least I hadn’t paid $650.00 for a toilet seat. Anyway, it was “time to make the donuts” and get a pic worthy of my fellow contenders, or to “blow them away” (see what I did there….I’m so punny). I had the camera set with a delay and 10 continuous shots. So it was time. 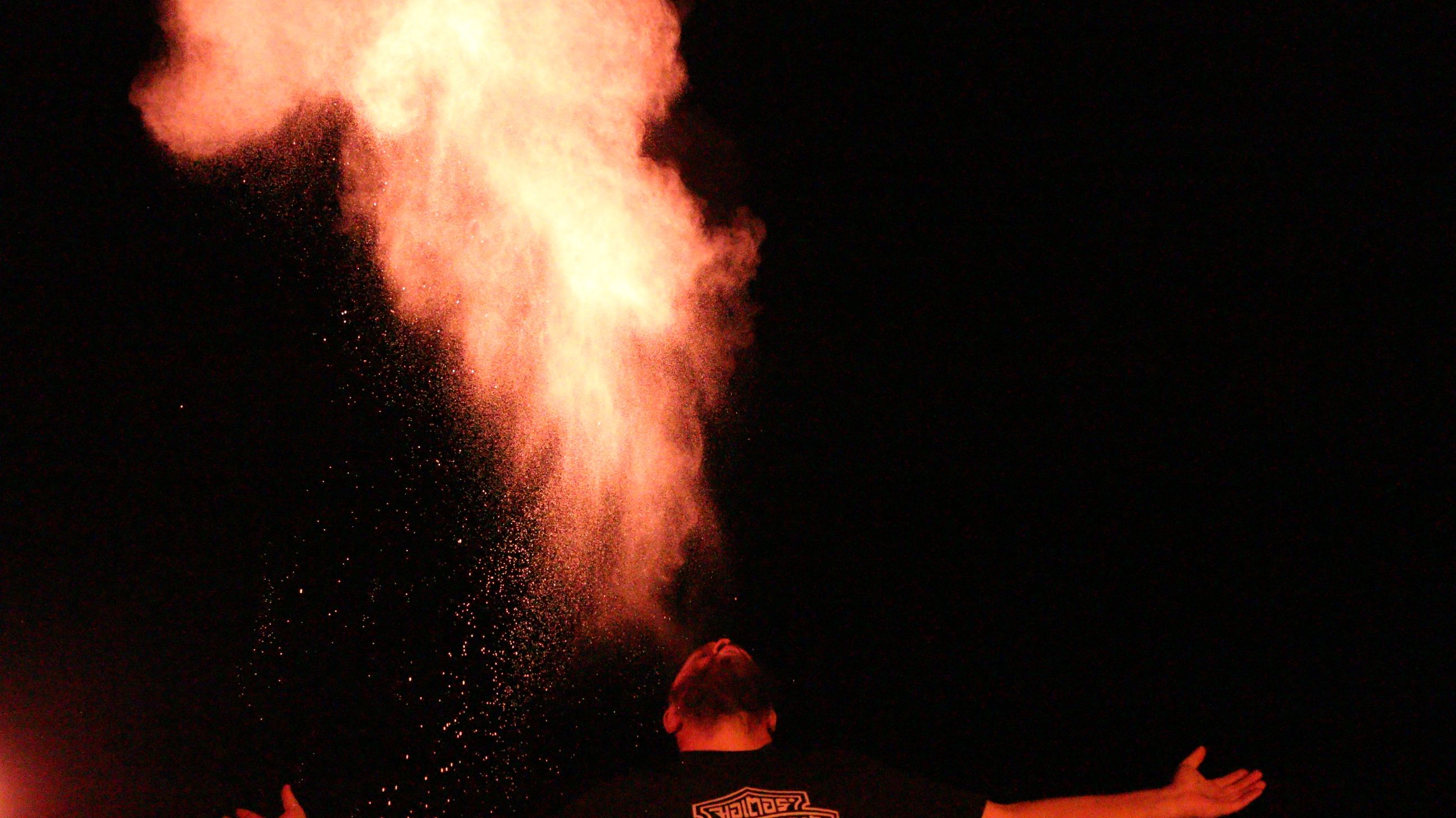 After going through all the pics, I decided on this one. 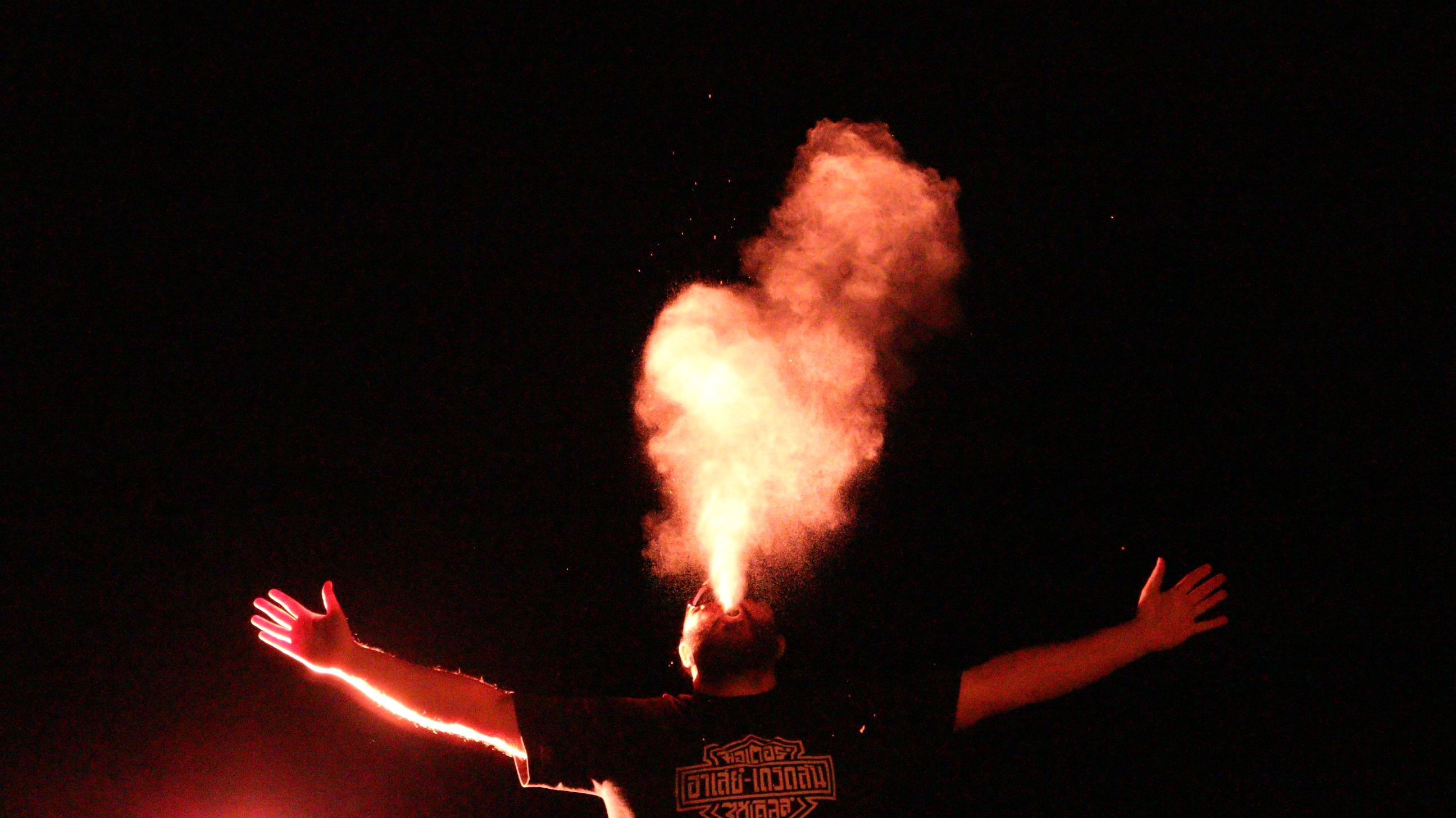 I thought some of the others were cool, maybe cooler (my son said it looked like I was breathing fire), but I wanted to make sure that the peppered one could see that the powder was being blown out, not just spread in the air above me. I felt this was the best representation of that. Thus it was that the challenge was done. BUT….

If you’ve read this far, looked at the pics, and are a sharp cookie you may have noticed something that has caused you to have an overwhelming, nagging question…..

WHAT THE HELL WAS THAT LITTLE FLASHLIGHT FOR???

I mean, why the hell do I need with a little flashlight when I have that big ass, bright as all get out movie light? What possible use could I have for this?

AHA!!! Well I needed a little something extra to help me get a clean, big cloud. In my tests it was hard to do that by putting flour in my mouth, couldn’t get enough, all of it didn’t make it out. So my secret weapon was the mini flashlight….or at least part of it. I took it apart so I could use the body as a tube. 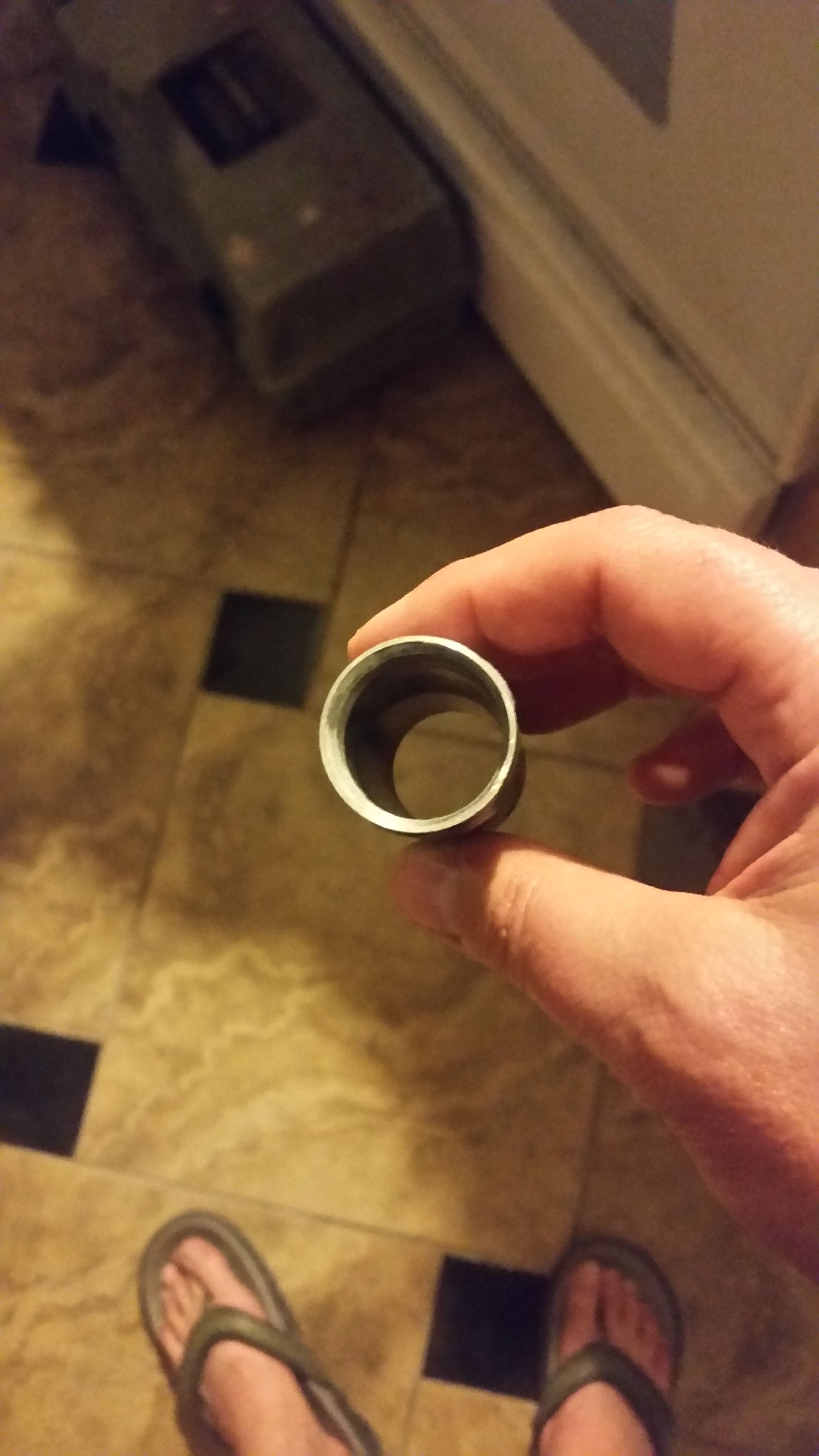 This allowed me to fill the tube with more flour than I would have been able to put in my mouth without. It kept it dry and gave me a channelized tube to shoot it out, like the barrel of a gun. BOOM So now you know my secret on this one. You can even kind of see it in these pics at the end of one of the series. 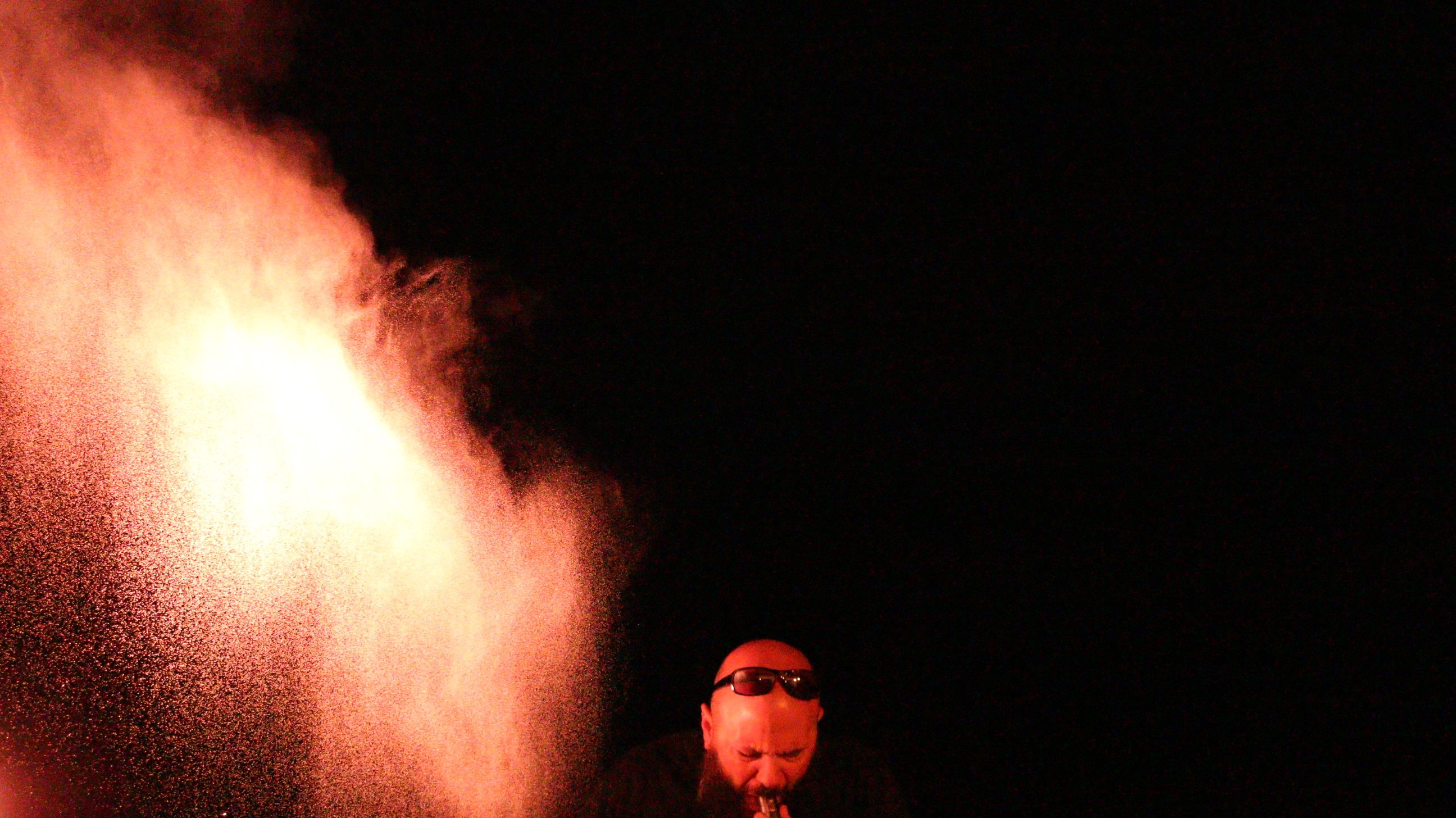 Thus it came to pass that the powder flew mightily. Another challenge was in the history books. It was time to revel in the glory of achievement, but only for a brief moment. Rest is but a crutch, hesitation unacceptable.

“On the plains of hesitation lie the blackened bones of countless millions who at the dawn of victory lay down to rest, and resting died.”

You are a great writer!! I was on the edge of my seat the whole read!! And learned a trick for the next blow something in the air challenge :)

Thank you @mariannewest, most appreciated. I put it the article out when I did on purpose.....since if someone read it before the cutoff would have a little trick to use for Day 41.

Pretty cool, I'll have to try this myself some time.

cool seeing the behind the scenes

Thanks for the tip brother @tattoodjay. Keep on moving forward on the challenge, I'm living vicariously through you guys now. img credz: pixabay.com
Nice, you got a 65.0% @trafalgar upgoat, thanks to @stuntworksinc
It consists of $22.27 vote and $7.42 curation
Want a boost? Minnowbooster's got your back!

Nice work and great idea with the tube!

Thanks brother. Keep racking up those bonus points.

This post has received a 20.69 % upvote from @sneaky-ninja thanks to: @stuntworksinc.

This post has received a 2.75 % upvote from @buildawhale thanks to: @stuntworksinc. Send at least 1 SBD to @buildawhale with a post link in the memo field for a portion of the next vote.

I was slow getting to read this but thoroughly entertained once again! Love that you share your “secrets”!👍🏼😁

Lol,I remember grabbing the same thing but changed my mind and just take the baby powder instead! For goodness sake it's all wet before I take the shot so I need to put more (eat more!) Haha and you Stunt always raise the bar. Yep.. You win! Season 2!!!!! Common!

Congratulations @stuntworksinc! You have received a personal award!

@stuntworksinc you were flagged by a worthless gang of trolls, so, I gave you an upvote to counteract it! Enjoy!!