Once more into the breach cried the intrepid selfiers of @papa-pepper s Selfie Challenge, as they prepared for Day 24 to commence. Courage and tenacity ever present within this crew self picture taking adventurers. As the time grew near, our warriors waited with sweaty palms, thumbs tapping phone reloading pages or fingers striking keyboards on computers, trying to be the first to behold the next challenge leveled by the sage known as papa.

The challenge beheld this day? 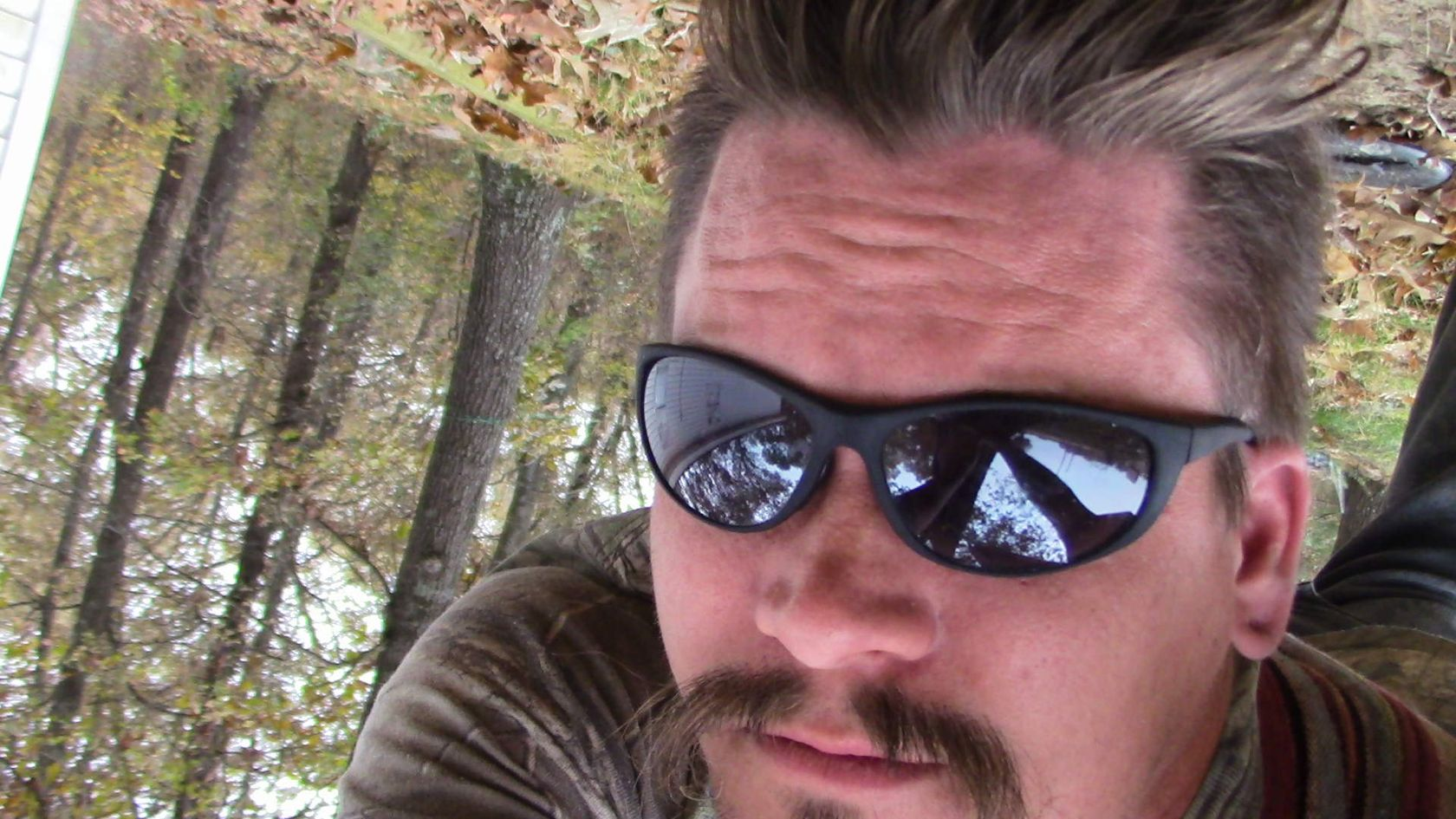 Our task would be to see life, as @doctorcrypto put it “In the upside down” as if one were in the TV show Stranger Things. And to make sure something in the pic proved it. SUDDENLY…..households were rife with people sitting upside down, limboing, doing headstands, laying backwards on stairs (and having to stay there for awhile because “screw you” said their body). No moment to spare as the “quick draw” was sought out.

Once again, my quick draw game was weak. The curse of living in the boonies where WIFI is non existent and one runs everything internet from their phone….except for the older die hards who are still locked into using their satellite internet at some of the slowest speeds know to man. WTH fogies, get rid of the flip phone. But I digress.

Once again it was time to cogitate mightily, commune with the metaphysical, ask Thor & Odin for guidance on WHAT should become my method for this challenge. Again, there were many of the stand by’s mentioned above. Many pieces of furniture were misused (but no furniture was injured during the filming of this contest), many tested their flexibility (some lost), but one reoccurring theme seemed present. Almost everyone had their photos taken at fairly close range. This seemed to cry out to me, or it might have simply been the spicy taco bell. Whichever it was, an idea began to present.

As my noggin worked overtime, which doesn’t take much considering the source, I thought that perhaps a fuller shot to truly show me upside down would set it apart a bit. Also….it felt like it was time to incorporate a little bit of my work life into the all important selfie life. As I mentioned in a previous BTS I have a lot of weird stuff…..and some of it is for my work.

Thus it was off to the storage container of coolness to gather the tools I would need to set my man snare. First the obvious, some solid rope. Got literally thousands of feet of that, so no worries. To add a little spice to the set up, some pulleys, carabiners, span sets (the black loop looking things), a flying vest, and of course a ladder to get up into the branches. 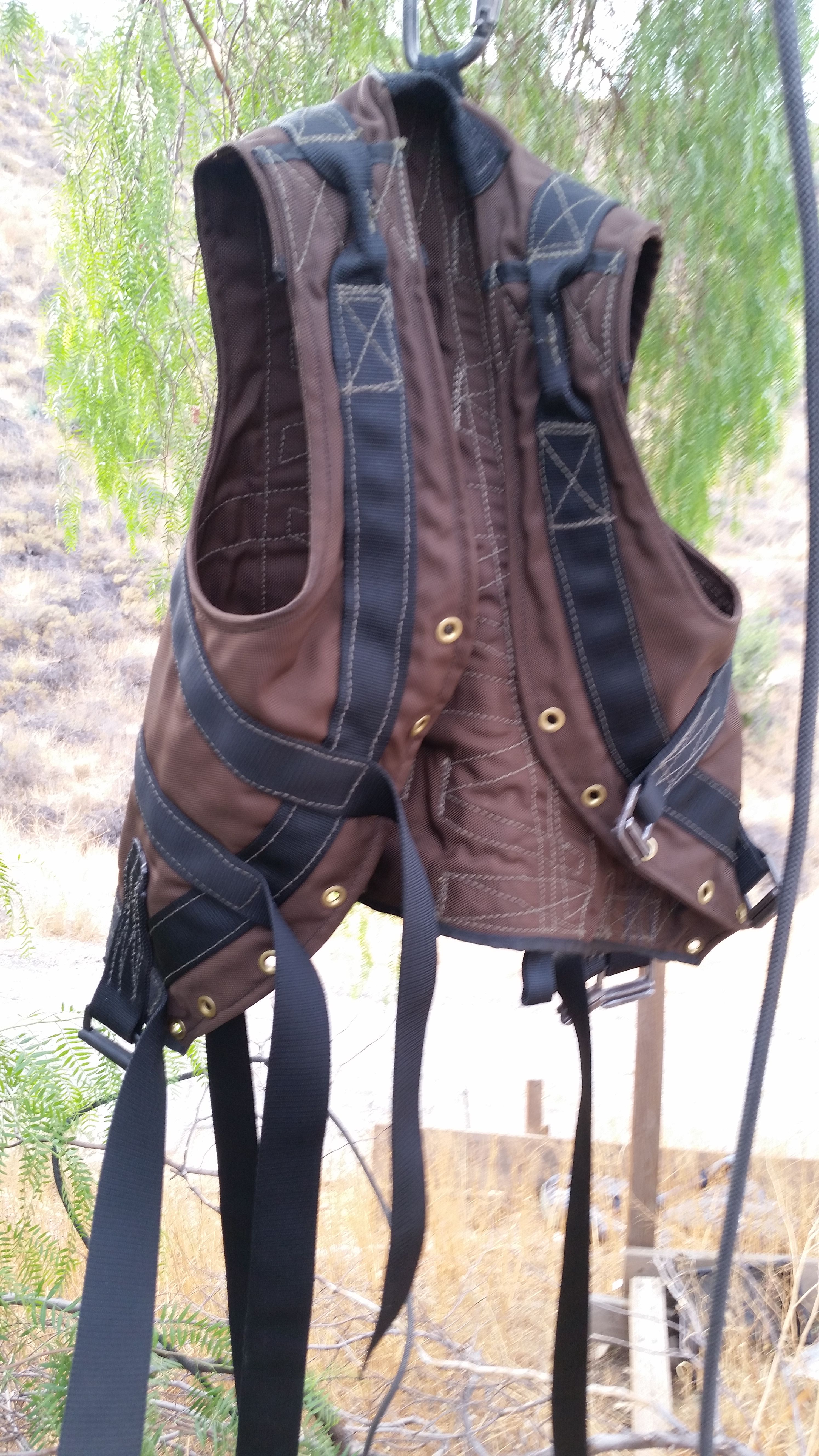 Once I had all my swag, it was time to make a little rigging magic happen, or at least try and not drop on my head. So up the ladder I went, Curious George style, to set up the crux of the rig….my pulley/pull point. Basically you want to have a point overhead that is easy to move a rope though in both directions without much friction. No problem, throw a pulley up with ones rope through it and bickety bam, we’re on the move. Now it was just a matter of attaching a belay device lower on the tree, this uses my weight to lock the rope in place until it is released to slowly lower the weight on the other end of the rope. So I can take up slack by pulling, but when there is weight it locks. Now a quick test by standing in the loop to make sure.

With the successful test, which is fortunate since I’m on the side of a hill and would have ended up rolling down if it didn’t hold….it was time to set up the final gag and test that.

Namely, I needed to be upside down, as this was kind of important to the challenge. When I first thought of it I felt like it seeming that I had stepped into a booby trap would be fun. So that was the look I was going for. I put on my vest and bid my son to work the belay and take up slack for me as I climbed my ladder. A quick hang to make sure everything was going to hold….boom. Now down to get the rig built.

You see for this you don’t really want to be hanging from your ankle. Sure you can try it that way, but you’re asking for your ankle to pop, you leg to dislocate in multiple places, and things in between. So what we do is “pick” off the end of the rope to a “hip pick” built into the vest. We then run it under the pants down to the ankle and attached some nylon webbing, or in this case one of my nylon military riggers belts, around the ankle to hold the rope there and “appear” to be tied there. 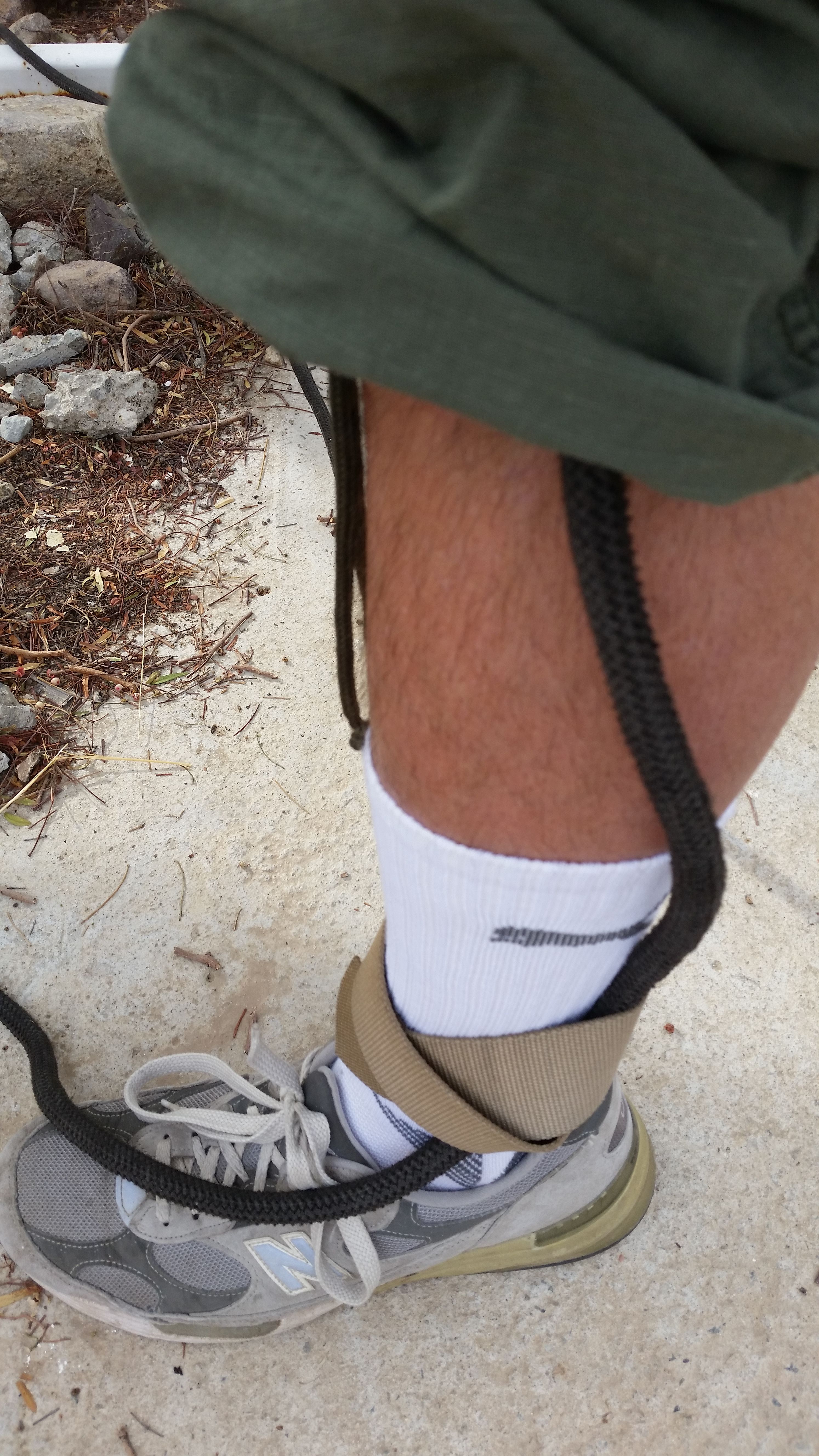 Now to test and see what it looks like…..well a lot of it looks like my back. Why you ask….because I started spinning when I released and swung into frame. Not enough to start “chucking of up” (that would come in a later challenge….in a manner of speaking), but enough to screw up the pics. During testing we figured out a broomstick was helpful, kind of like using ski poles. 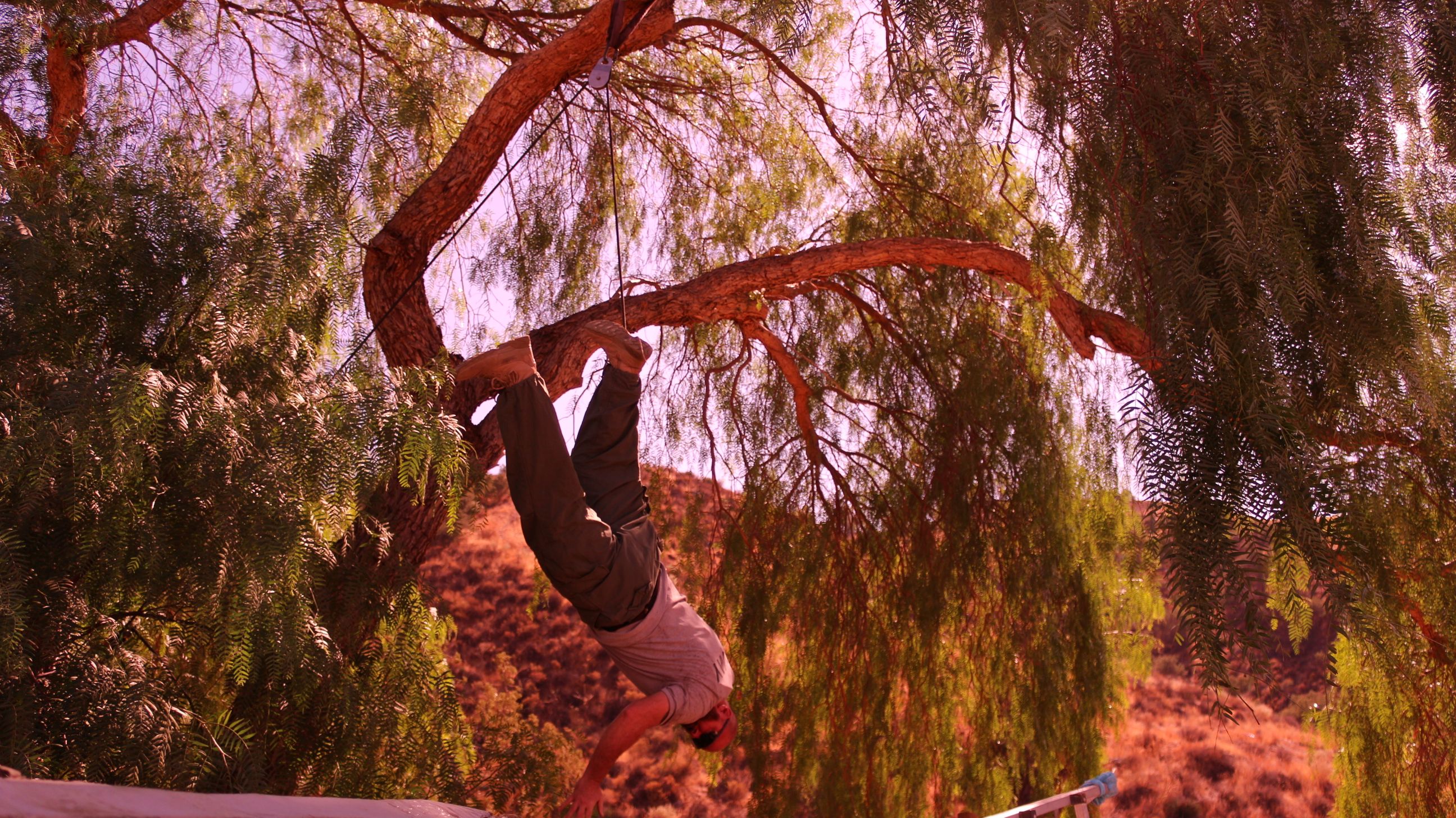 Thus, with testing completed, it was time to make some art. Before I did my final I changed a few settings on the camera. Since during I had anticipated swinging around, I had decided to up the shutter speed on the camera ….I now upped it some more and set it at 1/500, or one five hundredth of a second. This would allow the camera to stop any motion if I ended up spinning. This would prove to be a good call. I also changed trigger to 10 second delay and continuous shooting for 10 pics.

So we were ready. Up the ladder I went, as my son took up slack. Once upside down, but holding the ladder, I hit the button and swung into place, my trusty Quidditch broomstick by my side. My son helped steady me and got out and….click click click, pic pic pic and down I came to see if it all worked. Lo and behold, there were some good pics.

Early in the contest we were submitting multiple pics. Clearly this made “papa’s” brain hurt, so he changed it to only one pic allowed. Use more, lose your chance for bonus greatness. HOWEVER….being a film industry geek, I just couldn’t resist having another angle. So once the camera finished it’s 10 pics, I told my son to hand me my phone and snapped a couple of overheads before having him bring me back to earth. I was tempted to use one of these cause I thought they were cool. But I wanted to make sure there was no doubt that I was “just hanging around.” So my the final pic became: 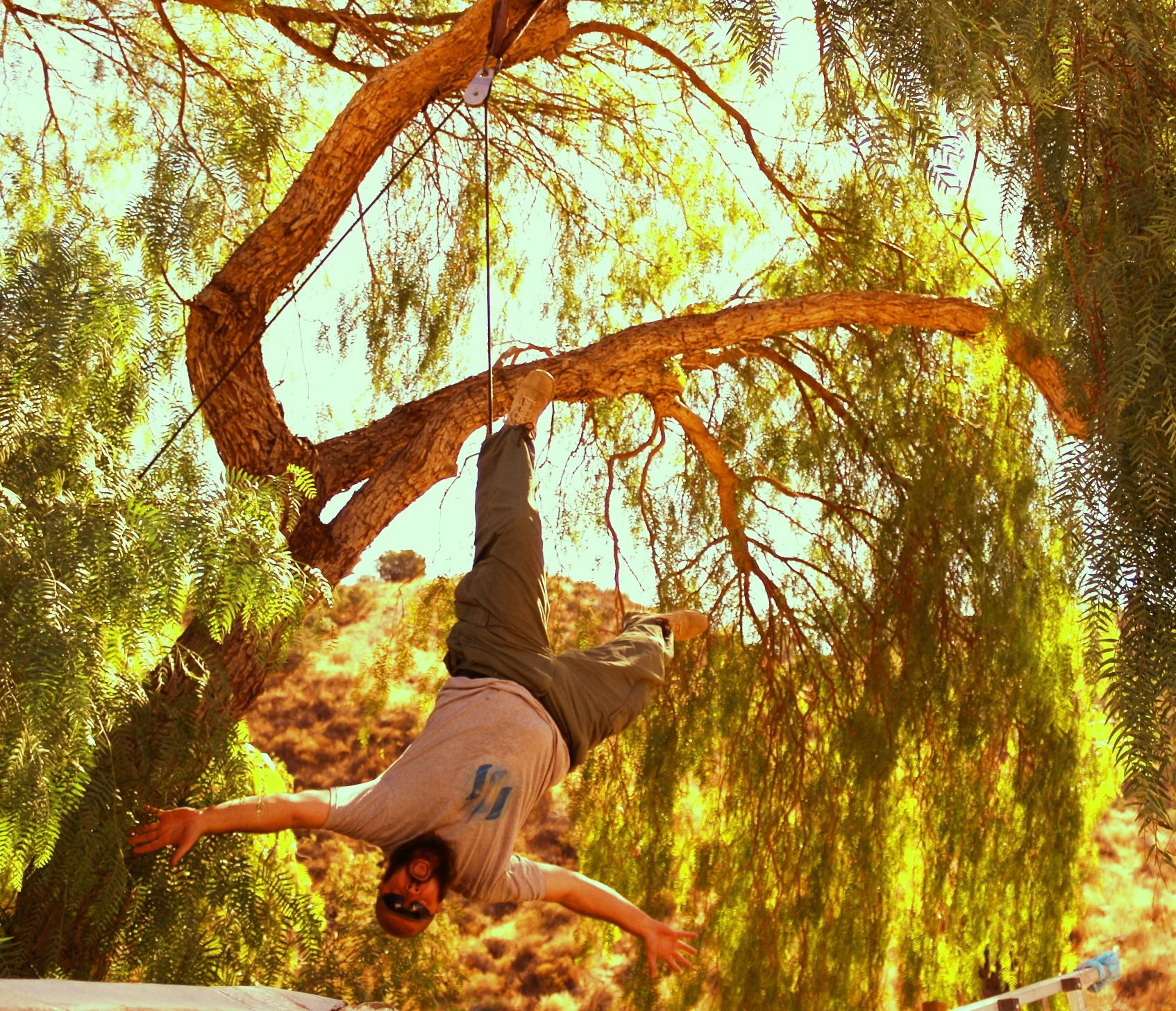 AND SO my time as Icarus had ended. Gravity had been bested, my neck remained unbroken, and hanging upside down turned out to be a cheap buzz….or it was a burst blood vessel, but whatever. A minute price to pay for the right to say:

ARE YOU NOT ENTERTAINED???

Well @papa-pepper, are you not? Perhaps but a bit, yet his icy façade of indifference was showing a crack or two as players upped the ante. The upper hand is yours for now, well probably for pretty much the whole thing because it’s his contest an all but….we shall overcome….We shall entertain….We shall prevail….well one person will prevail since it’s a single elimination but that is totally not the point and doesn’t sound near as cool.

Congratulations @stuntworksinc, this post is the eighth most rewarded post (based on pending payouts) in the last 12 hours written by a Superuser account holder (accounts that hold between 1 and 10 Mega Vests). The total number of posts by Superuser account holders during this period was 793 and the total pending payments to posts in this category was $3070.41. To see the full list of highest paid posts across all accounts categories, click here.

Entertained!!!👏😄 I did get popcorn and drinks stunt!!! You definitely raised the bars of just taking a boring selfie👐 ❤

Where's the fun in that? At least not yet anyway.... img credz: pixabay.com
Nice, you got a 97.0% @trafalgar upgoat, thanks to @stuntworksinc
It consists of $33.56 vote and $11.19 curation
Want a boost? Minnowbooster's got your back!

Well written! I like when you reveal your secrets.

I've never seen a up/self-goat so huge! Do you think it will increase your 'visibility'?

That is my hope @ecoinstant. Get more people to see it. Not much profit because of their curation and the cost, but hopefully it'll push it farther up.

I noticed it is listed 13th on trending and 7th on hot under the contest tag! I think about this because you give all the curation rewards to, in this case, trafalgar.

Thanks for explaining your thought process! There is so much to this new platform 'steemit' that I feel like I will be learning forever ;p

Very nice take on it.
Holy rigging! I just went to the playground pull up bars.