Behind The Scenes of Papa-Peppers Selfie contest Day #22 So this is the first in my series of BTS (behind the scenes) posts covering @papa-pepper 's Selfie Challenge contest. Obviously I can't really speak for everyone else in the contest, but everyone has really been bringing it, with enough creativity and fun for a hundred people and quite frankly.... it's infectious!! So it's gotten me into it enough that I am always looking at ways to be more creative.

As such I wanted to start doing a BTS on what goes into making some of my pics. But I MUST start out with a big "THANK YOU" to @ecoinstant. This is really his brainchild and after seeing his post like this, I thought it was such a great idea I wanted to do the same thing. So thank you brother man.

I will do these when I can, and probably won't do every day as some days are simply just about getting an entry in and hope to be creative on the next one. But when the creative juices are flowing, the props and toys are available, and we have enough time....it is a blast to try and do something fun or cool. Keep in mind that most of us in the contest have families that think we are absolute idiots!!! Shaking their heads as we set alarms to wake up in the middle of the night to try for that "quick draw" (being the first pic posted each day)....creating entire scenes in and around the house with god knows what props....or blowing flour or powdered sugar all over the furniture (we'll talk about this one soon). And don't even get me started on fire and water. But crazy or not, we're all having a ball and interacting with the steem community from literally all over the world.

I didn't want to go too many days back, so I'm going to start with day 22. Why, because this one was only a few days ago and it was fun to do. The challenge laid down by Master Pepper was "Let's see those piggy noses" 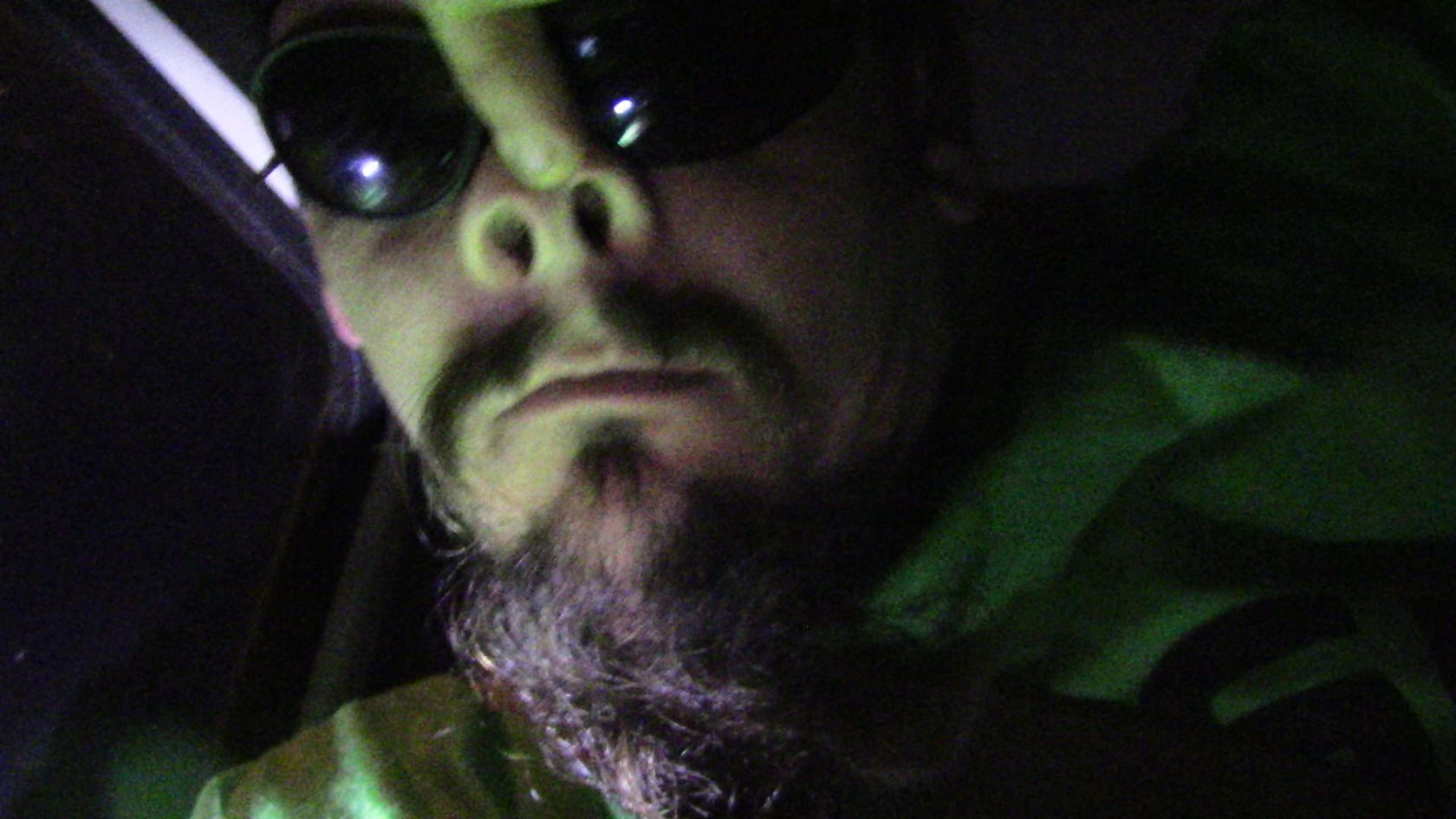 As you can imagine, a lot of fingers pushing up noses were evident. But there is a lot of stiff creative competition in this contest, so I thought I'd better get creative. So, I went looking for "famous swine" that I might honor with a recreation of sorts and get my piggy nose in. After considerable pondering I decided that a superhero might be in order.

So it was that SPIDER HAM was chosen as my messenger. Once I decided to go this direction it was time to get to work. I needed some materials to make my masterpiece (yack cough). The nose was a no brainer. A toilet paper tube cut in half, put an end on it, paint it red. Now a sharpie and white out pen to put the finishing touches on it. 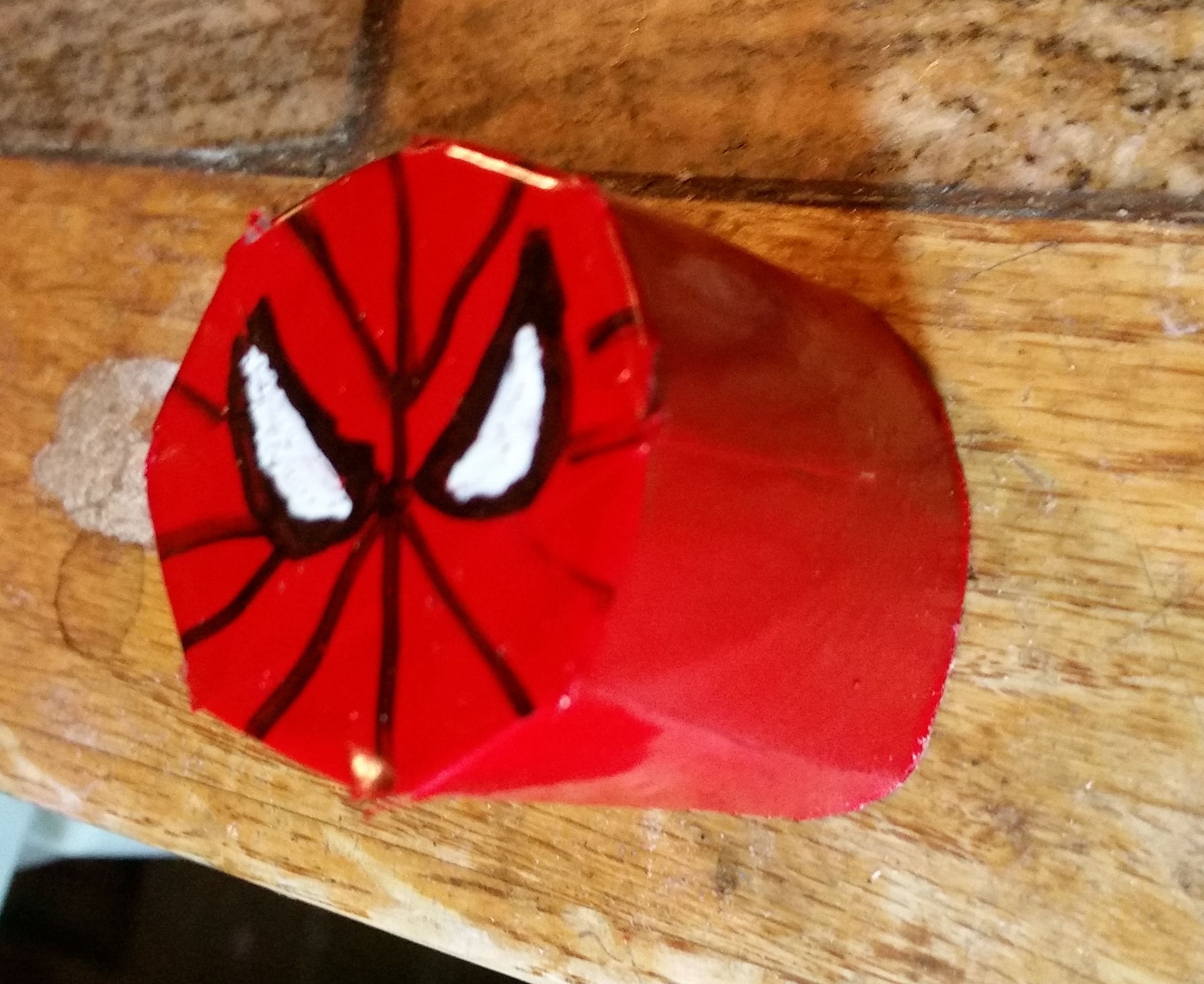 But what to use for the hood??? I was sure I had an old red tshirt....that was nowhere to be found. Ruh Roh Raggy.....I've been trying to only use things I have at the house, other than buying some peppers at the super market in honor of the contest creator.....YES, I have a lot of weird shit, although I prefer to call it eclectic. Anyway, it was looking pretty grim when I suddenly realized....I have an ugly red sweater that I bought for last years ugly Xmas sweater party. While it was a harrowing experience finding it....that is a tale for another day. The only thing left to gather were a few odds and ends, a sharpie, ruler, white paper, and some spray glue. Time to make it happen. I turned the sweater inside out and mapped out a web face with a sharpie. Then made some eyes with white paper and said sharpie. Then just glued em on. 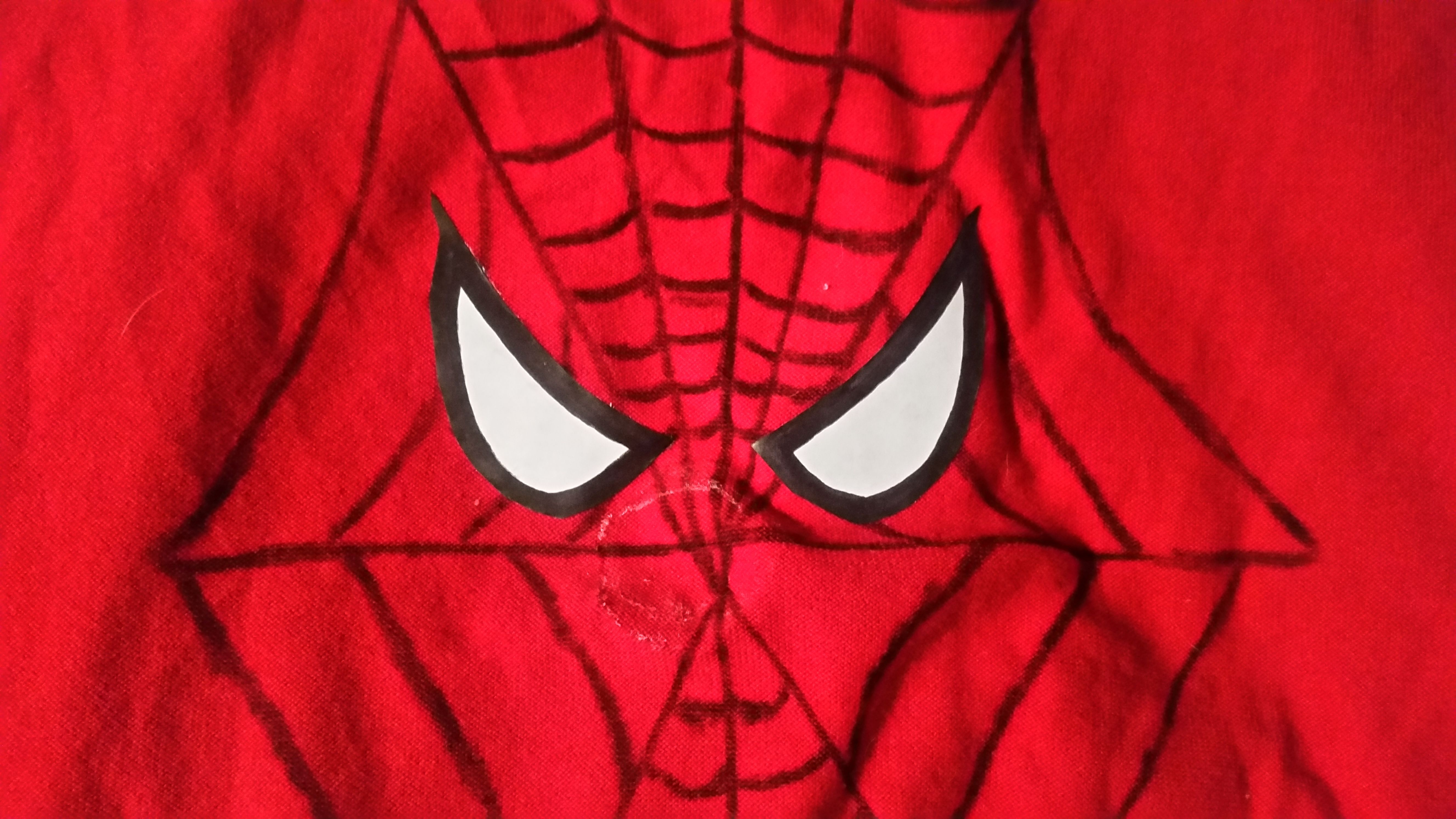 Now the nose, the most important part of the outfit considering the challenge. Wasn't sure how I'd get this to stay on. A string like the costume noses use was my first thought, but....I didn't want to mess with the feng shui of the hood. What to do? On a lark I just tried using the spray glue and hoped it would get enough on the edges of the toilet paper tube. It worked like a champ, luckily for me. Now it was time to don my crime fighting apparel and get a selfie. Just for fun I added a pepper, and gave it a hint of web to stay with the theme....since I already had the pepper from a previous challenge. I positioned my pepper and phone first, since I could only see a little through the sweater. Threw it on, tied the back, then picked up my trusty pepper and phone and snapped some pics. Took a few tries, but Spider Ham made his appearance. 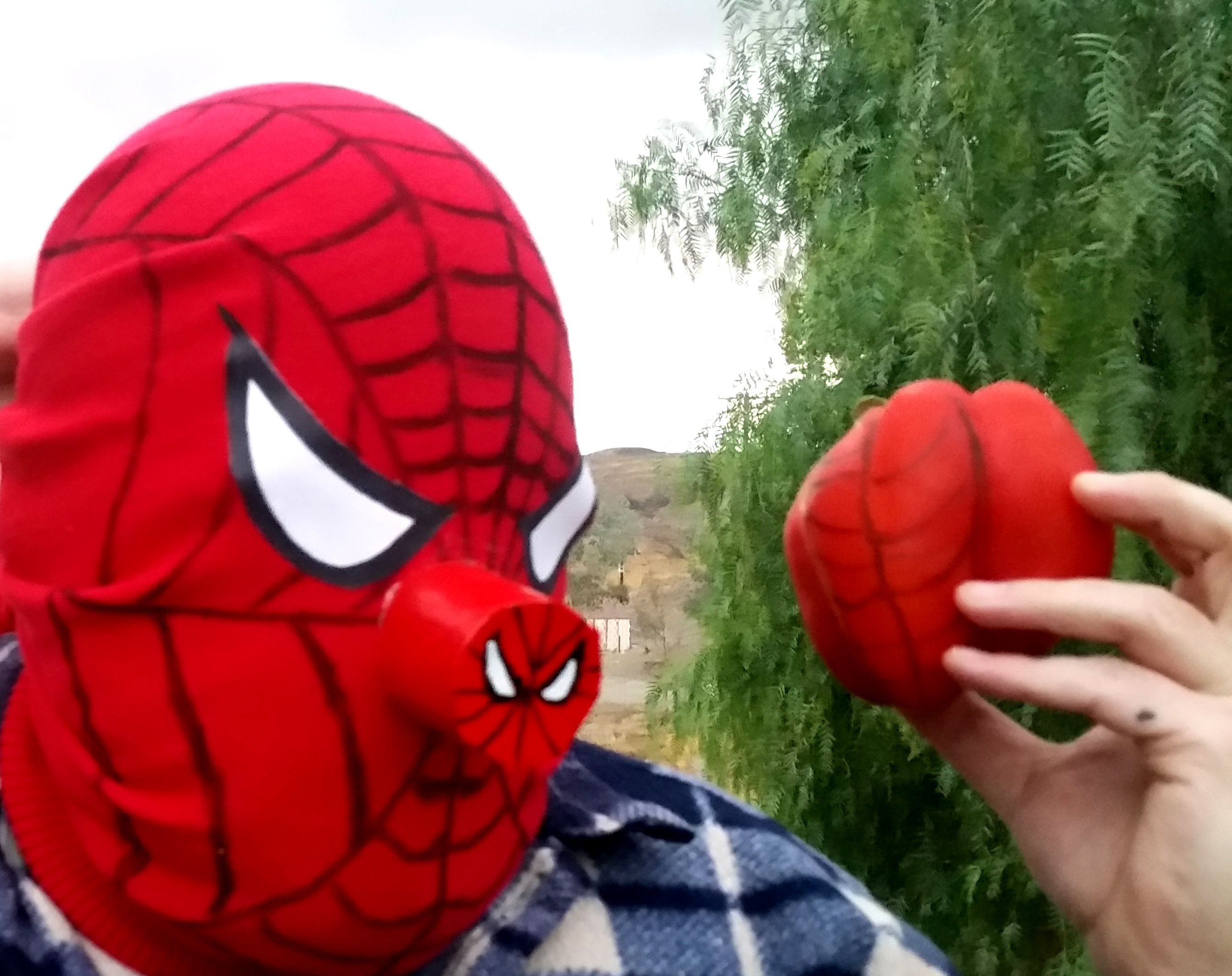 Thus I lived to fight another day in the most brutal selfie contest seen in eons. But we were all far from done.....the quest of the intrepid selfiers was still in it's infancy. Many adventures awaited the followers of the pepper. Not everyone will survive....but the fellowship will remain strong.

I see now in what way I inspired you ;p

You have inspired us as well with many of your pictures, and photography skills! I have some experience with film and stunts and your skills are very impressive!

Thanks brother @ecoinstant. Having fun with it and it is definitely helping me work on my camera skills. Learning a lot about the camera as I go.

The stunts are about to take me out of town shortly. Hopefully I'll be able to keep up. But I think I will, and it may make for some pretty cool shots if I'm lucky.

Keep it up! Once you get back I'll get around to showing you some of our independent video work - I think we need some explanatory steemit articles from you!

A "nice" from the pepper....Woo Hoo. More to come. Got the next installment ready to go, but need to take some additional pics for it tomorrow....when I have daylight. LOL

Heck no I didn't, that was a sincere woo hoo brother.

Thanks @funatoz, most appreciated. Another installment tomorrow. Thanks @carrieallen, it was totally fun to do. The things one can learn in a selfie contest. Before this I had never even heard of SPIDER HAM. 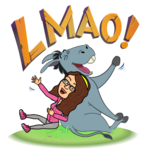 Not sure playing with a used toilet paper tube can be considered brilliant. LMAO

Better than playing with used toilet paper though I suppose.

if i wake and see you in the midnight, i will just run away

No need to run away....SPIDER HAM is a hero. LOL

It's been a fun ride so far! I love your antics!

Thanks @dmcamera. Liking the ride myself and will have the next episode out tomorrow.