How to identify a good ICO

bobinson (63)in #cryptocurrency • 3 years ago (edited)

As myriad of companies including big corporations Kodak & Telegram attempting ICOs as a means for capital raising and cases like India's all powerful conglomerate Reliance which controls Hollywood movie studios, International sub-sea cables, entire oil basins, stepping into defense and already a undeniable force with Jio Telecom network is rumored to enter the ICO-rat race, due-diligence is often tricky.

Cases like Telegram is a no brainier as they have proven their mettle in every aspect whether its technological, organizational or financial. But what about others ? Filecoin is an example ICO which I had personally missed out even though I was myself aware of and experimenting the underlying technology and even wrote about it in a previous article about block-chains. [1]

Due-diligence of an ICO and crypto-coin

First and foremost, DO-NOT conclude by the jargons in the white paper or look and feel of the white paper. All you need is a good content writer and a good visual artist to create a good looking whitepaper. Though I am inclined to suggest that a white paper written in LaTeX is worth considering.

Disclaimer: The author is an ex LaTeX ninja & still very nostalgic about LaTex :-)

Another aspect is a good website, but all we need is a good web programmer and a UX expert to get a good portal.

why the white paper may not be the best place ?

Check the following screen shot from a freelancer site & we will get an idea about who is writing the white papers. We normally think the white papers are written by engineers with deep knowledge of cryptography, distributed systems, eco-nomics, financial systems, networking etc. But it looks like in many cases its written by content writers with good English skills. 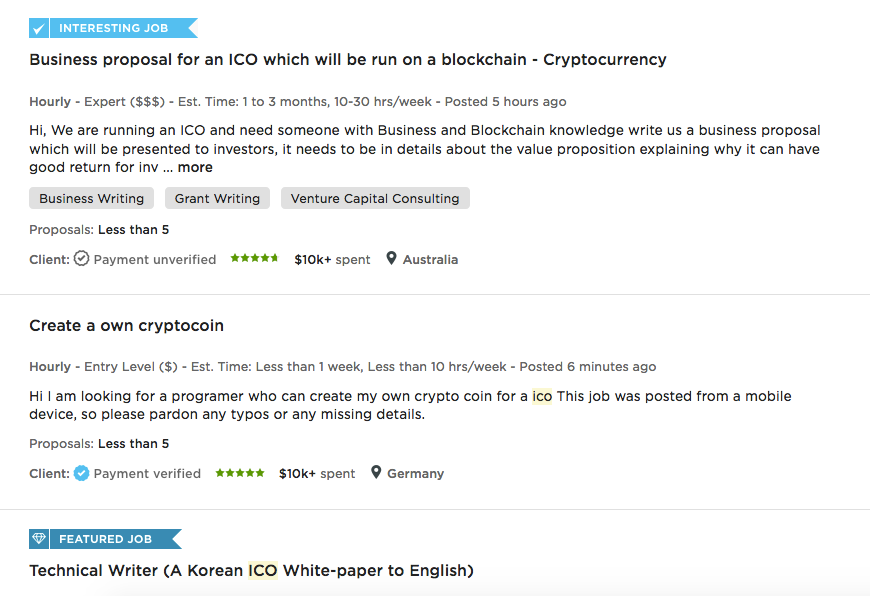 Some of the white papers that I have came across redefines basic computer science topics which students learn in their first year computer science course. The course is often known as CS101 and finding a technical white paper redefining or copy pasting every module from CS101 course is a good way to identify that its done just to meet the number of words criteria.

In a nutshell, DO NOT fall for aggrandizement or vengeance will be brought upon thee (you!) Oh, I thank @drakos once again for the above "By all virtunes showered upon thy by thee I feel obliged in the name of our lord to thank you for posting this blessing on steemit ! "

The essential guiding principle behind the block chains is trust and transparency. The word open ledger is not a random choice but I believe its the outcome of 3 decades of our experience with Free & Open Source systems and governance. At the same time decentralization and democratic decision has shown reasonable success, the Linux Kernel development model following the Free Software principles and led by Linus Torvalds individual with near veto power and knowledge seems to be the best approach.

Software projects like Linux Kernel ensured transparency and assimilation of knowledge by using mailing lists (USENET), public code repositories, code reviews etc. When the original bitlocker code hosting ended having issues, Linus Torvalds wrote Git source code management tool which has now over taken every other version controlling system in existence including my favorite clearcase. Products like Git where the side effect of transparency.

If projects like Linux Kernel can follow the 100% transparent model driving innovation and trust, crypto currencies and blockchains should not lag behind. Since the blockchains are all about trust and decentralization its logical argue that the blockchains need more transparency than a image editor like Gimp or Linux Kernel where the primary goal is not to establish trust and transparency. There are blockchains which are 100% open and hosted on tools like Github and a quick glance can show that those open / transparent ones including bitcoin is doing much better than others.

We can conclude that one of the best ways to measure the quality of the project, people involved etc is by looking into the Github or any other public repository. Howsoever insignificant the changes are, more changes and even issues / tickets from end users shows an active community. A rather peculiar example would be IOTA which was ridden with issues with its wallet and the Github issues log looked like a support forum. For me, that brings transparency and trust. There may be technical issues, but it can be addressed.

The relationship between Github commits and market valuation 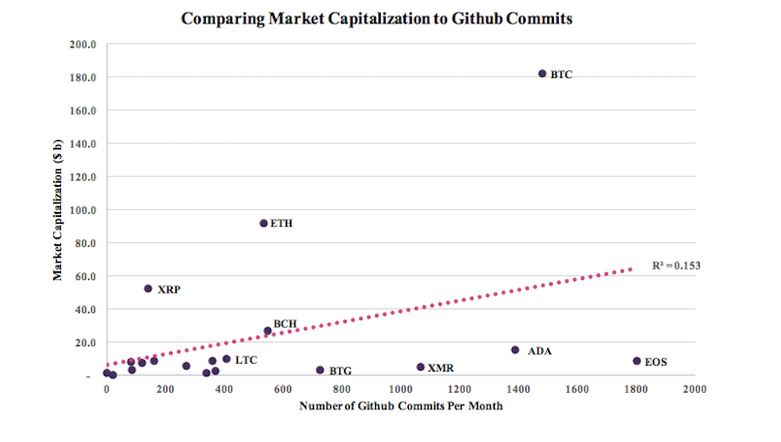 If we take out the biggies, Bitcoin (BTC), Ethereum (ETH) we will see that there is a clear relationship between the number of commits and the market valuation. Its quite surprising to note that Litecoin (LTC) and ADA as well EOS are on the same market capitalization though LTC is much older.

There are currencies claiming to be working under stealth mode due to various reasons -- I would suggest to stay away from them.

Its a good idea to find the track record of the people involved in the project to get deeper understanding. An example is Orhidprotocol which is lead by Brian J Fox. Now who is this guy ? Many people even they are techies will not recognize who is, but when we find out he is the author of Bash shell & the very first employee of FSF, that gives a lot of trust and generates interest in the project.

EOS is another over hyped project in the opinion of some. But lets ignore everything including the funny memes and jump into the Github accounts of people involved.

Developer Kevin Heifner who seem to be committing lot of code has an impressive track record.

I am not even mentioning anything about @dan and his work on bitcoin, bitshares, STEEM etc but lets just look at the following screen shot from the people and their activity. 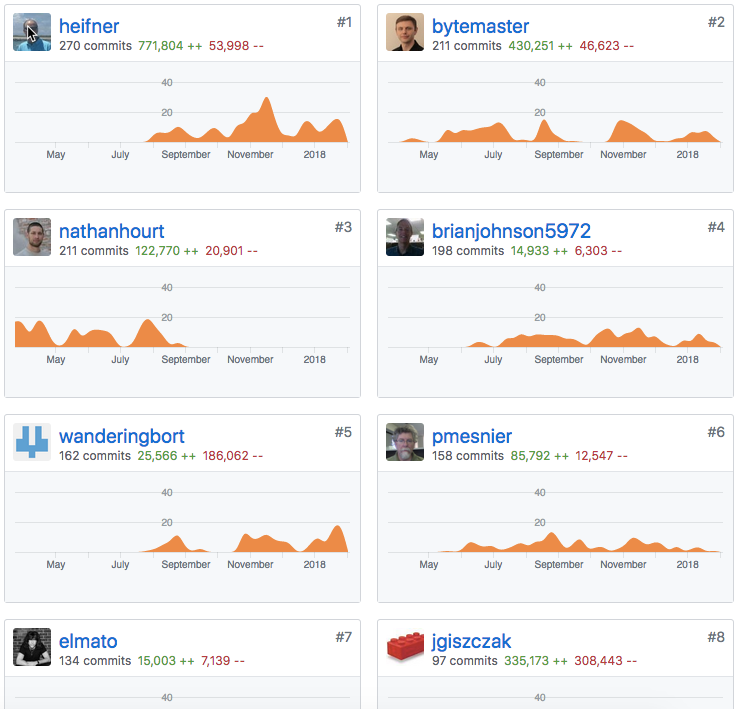 Maidsafe and Filecoin looks like following an altogether different class. If we take the example of Filecoin, it had the biggest ICO till date, funding is from the institutional investors etc. But they had created a successful utility first IPFS. Even though everything fails, IPFS has proven its mettle and is being around for more than an year and has been extensively used.

What is the Value proposition ?

From a design thinking perspective, for any business we should be able to define a unique value proposition to ensure sustainable business model. Simply put, the coins / ICO / token is not addressing a real world problem, its going to be create any value whatsoever.

J. M. Korhonen in his recent article My professional opinion as a blockchain researcher: I don’t see the point (yet) discusses this gap between blockchains and value proposition in detail.

I’ve spent the last 15 months researching the implications and possibilities of blockchains and related “distributed trust technologies” from a business and societal point of view. Sadly, I have to say that I don’t quite get the hype, as much as I’d love to believe in a technological revolution that democratises the world economy.

As it stands, public blockchain is very much a kludgy solution looking for non-existent problem, namely lack of trusted intermediaries in finance and accounting.

Needless to say, unless an ICO is offering a unique value proposition like Filecoin / IPFS addressing storage, censorship, CDN etc and STEEM blockchain offering a unique alternative to social networking, BAT addressing a method of replacing existing online advertisement models etc, the coin may be classified as one trying to address a non-existent problem.

In somecases, a quick audit of the code can tell one a lot of information about the coin. ie provided, the code available in public. Also technical discussions from the forums, github etc can give essential details. There are for example certain coins which is changing the bitcoin proof of concept implementation and then promising moon.

To summarize, we have to understand that the blockchain technology is not necessarily a financial - economical problem solver, but there are other real world problems which the technology can address.

A prioritized list of points for due-diligence can be

I hope this will provide a basis for deciding investment or technical decisions. I plan to write a piece targeted at people who are considering ICOs as well.

Vote for me as STEEM witness

I thank @vimukthi for lot of insights which helped me write this. So is @binkley and many others.

The post is a write up based on my talk on "Blockchain use cases" in blockchain meet #2 in Bangalore, India.
@lifecruiser had updated me about the event and both me and @firepower attended the event.

This is a comprehensive guide to identify or analyse an ICO. I would suggest that you can create an infographics based on your summary. You can also periodically share your analysis of any ICO(may be a good idea for weekly post :) )

thanks & the info-graphic is a good idea. Writing weekly reviews of ICOs will sometime attract hostile responses as the last 2 white papers I read was more of jokes !

Amazing guide
Do you have a fav ico in the upcoming months that you found promising?

Well the good ones are well known I think - Filecoin, Maidsafe, Orchidprotocol .. the first 2 are post ICO phase but atleast Maidsafe is undervalued. Also this is an opinion purely from a technology standpoint and I have no exposure to knowledge of financial markets and the results in the market may vary : ie the usual legal tada-dada. Do not consider this as an advice :)

This post has received gratitude of 1.56 % from @appreciator thanks to: @bobinson.

That's a must-read post for every cryptocurrency investors, Thanks For Sharing 🤗

It's so insightful.
Thanks for sharing this. I have resteemed it