Facebook dirty move, to eliminate advertising of Cryptocurrency and ICOs

fernandorivera (36)in #cryptocurrency • 3 years ago (edited) 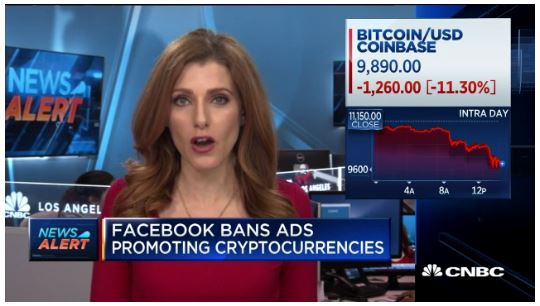 In light of the recent news of the new policy that Facebook has implemented in its platform to ban or eliminate all advertising it promotes with anything related to bitcoin or other cryptocurrencies including initial currency offers, ICO and under the excuse that I do not want to serve support for operations or businesses related to cryptocurrencies I can not help thinking about the news that was presented in early January when Mark Zuckerberg had expressed interest in cryptocurrencies and its potential use in 2018. This leads me to think that it is very possible to speculate that in the not too distant future he will try to implement his own cryptocurrency which, only with the premise I can assure that it would be a very supported currency and that it would have great popularity almost immediately, And in business competition is never seen well, it may be that this recent policy of eliminating all advertising from other cryptocurrencies of Facebook is only the first step to leave the way free for your own cryptocurrency which in my view could be considered a dirty move, because although it is true that some scam pages use advertising to get the attention of potential victims, the politic of ban all advertising is a disproportionate solution, also since they are in that the following step could be to delete all groups or pages that deal with similar topics because they are also a way to promote cryptocurrencies, and I would not be surprised if they do that.

The interesting thing would be to see if later on Facebook implements its own cryptocurrency ... Which is why the following questions arise: Will they advertise it in their social network? Because according to their own policy they could not, or reform the policy so that only they can publish their own.
Only time will tell us the true intentions of Facebook, and that gives me one more reason to trust in steemit 😊

I would like to know your opinion to this topic, I would greatly appreciate your comments.

Personally I think the main reason why crypto is low at the moment is the lack of awareness for altcoins. Bitcoin is the most prominent and once other coins are promoted they will be much higher in value.
Thanks the great info.

You are right @techflash that is one of the reasons, unfortunately with this news facebook wants to make clear, that it does not want to promote anything that has to do with the subject.

Congratulations @fernandorivera! You have completed some achievement on Steemit and have been rewarded with new badge(s) :

It seems he wants more share of the wealth. He is the only one benefiting from Facebook. Indeed, steemit is better since we can benefit from it at least.