You've heard enough of the Blockchain technology and its Cryptocurrency already. Whether the positive impact on the community, such as quick and seamless transactions, cheaper fees, and its transparency. Many people around the globe have been using it for their daily basis. Starting from the educational sector to financial sector (such as trading and investing in some projects) has never been this easy before.
Along with that, the users also increase by the day and that cause to the slowing down of the connection and even the unsustainable cryptocurrency price. This unpredictable moving price often causes the traders and investors to lose a lot of their money in the game. The lack of stability on the crypto-investment product would bear a huge impact on the related sectors. The XATRA project has created to answer all of those problems. The XATRA ecosystem will be able to sustain the acceptability and sustainability of the cryptocurrency.

XATRA is a virtual cryptocurrency using its own blockchain as its ecosystem. XATRA uses blockchain technology to make the platform become less expensive, more responsive, transparent and eliminates third parties payment fees. The XATRA platform also comes with its own set of wallet (mobile, web, and paper) to conduct an internal exchange, staking and even mining platform.
The XATRA ecosystem goal is to achieve a fully-decentralized economic network by developing its own ecosystem, providing mature development tools, improving the development of documents, education, training activities and providing financial support to the users.

How Does The Platform Works?

XATRA uses hybrid protocol, PoS (Proof of Stake) and PoW (Proof of Work) as the base and combined with anonymous Zerocoin protocol.
The Proof of Stake protocol choose to be the consensus algorithm for XATRA which can provide reduced transaction time and increase the transaction throughput. Each node in PoS system holds a balance in the main network token and have the chance to produce a block, as long as the balance is proportional. At the same time, all nodes with non-zero balances still eligible to stake the rewards.
With using that system, anyone with mature XATRA coins in their wallet will receive a bonus payment of XATRA coins based upon when and how many coins they're staking during the given period. The more coins a user stakes, the sooner the block is rewarded. The block rewards then will be paid out in XATRA coins after some period, depending on how many coins that the users' stake will be minted/forged. The interest will continue to rise in proportion to the time that the user keeps their coins in their wallet.
Along with that, the use of Zerocoin protocol provides Anonimity by the result of cryptographic operations involved with separate Zerocoin mint and spent transactions. The new Zerocahs protocol allows direct anonymous payments between parties. Each user of the coin can convert (non-anonymous) coins into (anonymous) coins, which later then called Zerocoins. This protocol can ensure the safety of the payments by "hiding" the transaction by converting all non-anonymous coins into the anonymous coins. Users can also convert the anonymous coins back, although in the principle is not necessary. 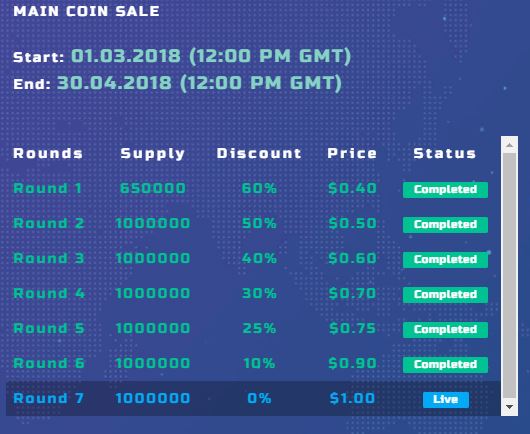 The XATRA users will be able to invest and make profitable trading with XTR coins. There are many features given from the coin, such as low transaction cost, fast processes, full-granted anonymity (Zerocoin protocol), alongside with the increase of price by the time the users' hold.

XATRA's wallet ecosystem is a virtual cryptocurrency that uses blockchain technology that makes this platform cheaper in terms of cost and hopefully this platform can be successful in its program.