Warning: Send your bitcoin to a new wallet before you proceed!

If step 3 does not work for you, you may scan the private keys manually. App crashed when I tried to scan the seed. Maybe the electrum bitcoin wallet seed is not supported in Bither. So I had to scan each address private key manually. This is how to do that: 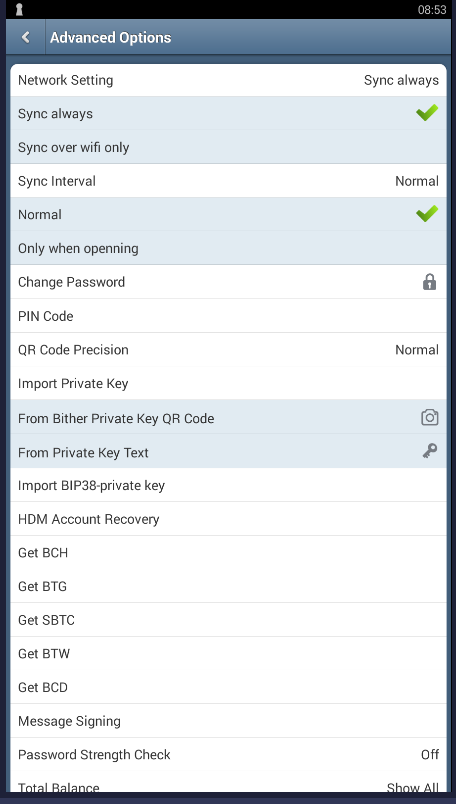 I hope this was helpful. If you have any problems, leave a comment.

Apparently these wallets are not new, so seems leggit. I tried with Bitcoin Diamond, it seems to work. I am now looking for an exchange that accept Diamond deposit.

Thank for the post. Are there any other exchanges?

Finally a legit solution, thank you so much, I hope your post will be upvoted, it deserves it !

Congratulations about your tesla car!

Olsm, I read your article on how to use Bither and bitpie application to claim bitcoin forks. I did all the process and it show me I have no getable coins....Does that mean i am too late to claim/get coins?

I scanned 19 private keys/BIP32 derived addresses already from https://iancoleman.io/bip39/. Is there a minimum of private keys i need to scan or do i need to scan all - meaning 100's or 1000's of lines ? Could you please advise me?

I bought bitcoin diamond Token ERC20 on coin base through airdrop last year, but have find it difficult to send it to any exchange.

Do you have a solution for me on such matter

Sending now to okex, I will report it if gets there or not ....

Confirm it works ! I can see my Bitcoin Diamond arriving at the exchange ;-) Now to sell or not to sell ?

I think sell. How can you say no to more sweet free Bitcoin Cash?

Thank you for your very informative post I have been trying to find a solution to this for a while. I held my bitcoin in a paper wallet but unfortunately I only have private key and not a HD 12-word pass so this fixed my problem as app accepts ether. Great stuff and thanks again!

You will have to help me in person! This is level complicated! ;)
<blond hair - you know>

I claimed all these shit forks and converted them into Bitcoin Cash.
Wooo, more free Bitcoin Cash for me! I love it!

Yes, i didnt pay to get these. I had bitcoin before these forks happened.

cool. I need to try today

As you all already know, Electrum released a version 3.1.2 of Electrum Diamond, for the fork on December 2017.

anyway to claim the coins, you can download the electrum wallet choose your OS, once downloaded, open Electrum

do not use existing wallet file, you have to restore the wallet if you not used segwit..

Hey I just saw this post on Minds & resteemed it here, thanks for writing this I had no idea about how to claim forks.

Anyone can suggest me best exchange for BTW?
thanks in advance

https://www.btw.one/ appears to be the official site, they list various exchanges which "have expressed intent" to support BTW, or have already implemented BTW.

Ok, I finally see my BCDs in Bither, but when I try to send them to Bitpie I get a "send failed" error message, why?

And you changed the currency in Bither and BitPie before copy and sending to the address?

yes, BCD in Bitpie and GetBCD in bither. And it works! Thank you!
The problem was the fees. By default in Bither it was set to 20x. and it was higher than my BCD amount, it gave me error. I suggest setting to "normal". So I solved!

when I try to send from bither to bitpie it just get stuck there.
these wallets are horrible and extremely slow loading and keep crashing.

I am sorry to hear that. Sending from Bither to BitPie worked good for me.

Can't get Bither on itunes in UK, it gives a Norway option then says not available? The windows wallet does not seem to work, or at least allow the importing of a seed. Any suggestions?

No, you should just import the private key in Bither wallet for whatever address you had balance at the time of the split of the forks.

Thanks for your reply. Im just confused about the first part where you warn us to SEND bitcoin to another wallet before claim. So Ive used a sweep into electrum from exodus instead of send from (to avoid a fee). Is it now safe to follow yr claim process even tho exodus shows a balance?I will be using my exodus pvt keys .

They worked for this task, but they look like shit wallets. Only problem I had though was that it crashed when I tried to scan the seed so I decided to scan the private keys instead.

Hi if i put the private keys does that mean my bitcoin will move from my original wallet to bither wallet ?

Move your bitcoins somewhere else before you do this operation !

Thanks for your help with this. When you say "move your bitcoins somewhere else"... can you give me an example of where? I have a ledger nano, multiple exchange wallets, MEW, etc...

I mean by that, that you have to make sure that all the addresses where you are going provide the private keys to Bither must not contain bitcoins any more. I do not use any hardware wallet, so I cannot help you with that. MEW if for Ethereum only ...
I believe you can use Electrum and create a new wallet connected to you ledger nano ....

Is this safe? Has anyone had their Bitcoin stolen?

Make sure to move your Bitcoin before you do this operation, that way you take no risks!

Step 3 is not clear to me, where do I manually insert the BTC seed?

It doesn't seem to be working. When I try to use HDM recovery I get a network error warning.

Then read further down. Do import of the private keys instead.

Does this work from "blockchain" wallet?

It works whenever you have access to your private key

Bitcoin diamond is 1:10. Others are 1:1. You can use a block explorer to check in what address you have balances.

I want to claimed these cryptocurrencies. Thank you for this information.

Thanks mate! I heard the ratio was 1:10 , Did you get 10 BCD for every BTC? please advise anyone.

That’s strange, I can’t get more than 1:1 :(. It’s difficult when trying to find the correct private key from Blockchain.info.. Anyone know any tricks with Blockchain.info ?

Is this going to create a 1:10 ratio of the BTC that is currently in my wallet? Or will it backdate to the time of the fork?

Thanks for your help. Which Bither wallet did you actually download? iOS, android, or a desktop version? iOS is not available, android is not compatible, macOS is not working/crashing while installation.

Hi
I have checked BCD addresses that have a balance, but when I import the BTC key into Bither and check the 'Get Forked Coins' the getable balance is always 0.
Do you know what is going wrong?

Can you elaborate more on Bither vs Bitpie? Step 2 is not clear to me on whether you are talking about Bither or Bitpie.

Bither does not let you send directly to an exchange. It requires you to send to a BitPie address for some stupid reason. So you have to send from Bither to BitPie first and then you can send from BitPie to an exchange or another wallet.

Damnn this is helpful u get 10000 views mate! Do u also know a way to claim the new ethereum hardfork. Can't seem to find it or maybe it still has to come. Great Blog by the way

Yeah. But I don’t feel like that many people think it was very helpful when so few upvoted. But I guess many was coming from google and reddit and so on who don’t have a steem account. So maybe I got us more users registered for Steemit after they saw this post! :)

Thats excatly what i thought. Bro this means it was such a great post that you got 10k people from google on to steemit. You should be rewarded for that.

I'm going to send a bit SBD u doing nice work. To bad u aren't blogging anymore but your still active! highly appreciate people like you on steem, much respect.

Thank you for the help and nice words :)

Call me stupid but I have opened the bither wallet but can't get past the cog -> advanced -> import private key -> text stage. where is cog,? Advanced not clear at all. Any help appreciated.

I'm trying to follow this but when I scan the private key to import it in Bither, it asks me for my original password and it's not the password for Bither that it needs. Does that mean I need to type there my full seed from my ledger wallet? that doesn't make sense nor look safe. What am I missing?

If you think an article is great, it would be nice if you upvote :)

Thank you, you are welcome!

friends this telegram pump group is very successful. I would recommend https://t.me/rocketpumptrader

I am aware that this is an old post, but just to post my reflection if somebody get stuck.

So, I attempted with BITPIE and succeeded.
However as of 21st of February 2021, ios app had a bug which crashed the app whenever you tried adding private keys.

So, I have installed emulator for android and downloaded Bitpie there.

From there, after you create wallet, go to "Me" section -> Setting -> Import your asset and you should be able to handle it from there.

Thanks for the great article olsm, three years later this still points people into right direction

YOU ALL CAN USE ELECTRUM BCD! why to do it over android?? https://www.electrumdiamond.org

This wallet is scam

I tried it and confirm that, for now, it is a scam wallet.