When the last specimen of a species dies, its extinction is said to have occurred. This fact is a natural phenomenon that occurs when a species can not survive in certain environmental conditions or when it is in constant competition with another stronger species. Normally, the extinction of a species supposes the emergence of another one better prepared and better adapted to the ecosystem.
However, the direct or indirect intervention of humans (pollution, damage to their habitat, hunting, fishing and illegal commercialization) in the fauna and flora has also made this process increase for many years.
In this publication, my dear friends, I share with you the most well-known story about the extinction of a species and it begins in the Galapagos Islands.

Where are the Galapagos Islands located?

This group of islands (Archipelago) also known as the Archipelago de Colon are located in the Pacific Ocean near the coast of Ecuador and since 1976 are a World Heritage named by the Unesco. 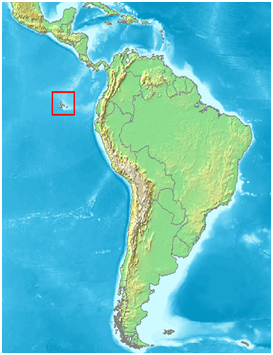 Galapagos Islands
Author: M.Minderhoud in Wikipedia
with Public Domain
This archipelago has been the subject of many studies carried out by researchers from all over the planet, who seek to analyze its particular nature and also protect and conserve the fauna and flora present in them, especially since that the great Charles Darwin published his work in 1859 "The origin of the species by means of natural selection" with the result of his research on these islands. When did this history of extinction begin?

Historical records show that during the eighteenth century, whalers and pirates converted these lands into a refuge and it attributed to them the overexploitation of the species of animals that inhabited it, when they turned turtles (marine and terrestrial), sea lions and iguanas into food. The destruction of the habitat is also attributed to the presence of invasive species (goats, pigs and rats) that preyed on the vegetation and profoundly affected the ecosystem. 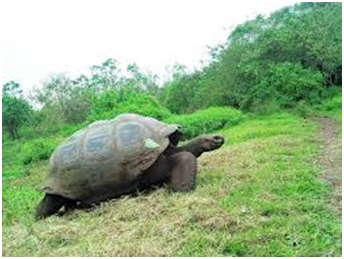 Turtle with vaulted shell - Island San Cristóbal Author: Esteban02212004 on Wikimedia Common Licence: CC BY-SA 3.0
Giant tortoises are one of the species with the highest life expectancy, since it is estimated that they can live more than 100 years in the wild and around 170 in captivity. They can weigh between 300 and 417 kilos. In Galapagos there are 11 species of giant tortoises that are differentiated by the shape of their carapace, size and geographical location.
The characteristics observed in these species have been related to their location and the type of ecosystem in which they live.
The turtles that have dome-like shells, short necks, thick legs and bigger size are located in high and humid lands and they feed searching in the ground. Their average nesting is between 14 and 16 eggs per nest.
The turtles that have a "saddleback" shells, have long legs and necks and are smaller, live in low and dry lands and feed on the vegetation of the trees. Its average nesting is between 5 and 6 eggs per nest (few compared to the previous species).
Charles Darwin supported his theory of evolution by observing these morphological differences in the giant tortoises of the Galapagos Islands. The Giant Tortoises and the ecosystem

The movements and activities of these large vertebrates modify the ecosystem in such a way that they create conditions for the development of the life of other species. Consume large amount of vegetation, they are very good seed dispersers and their large size allows them to open roads and spaces between the vegetation in which birds and other species can feed and live. Then we must consider its extinction not only as the disappearance of a species, but as a problem for the normal functioning of the ecosystem in which they inhabit.

What were the species of extinct giant tortoises in Galapagos? 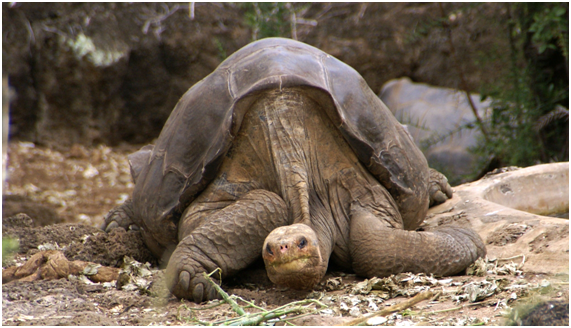 Lonesome George -Pinta giant tortoise -Santa Cruz
Author: Putneymark in Wikimedia Commons with licence CC BY SA 2.0.
George was found on Pinta Island (one of the islands that make up the archipelago) in 1971 by a pair of biologist husbands from Harvard University who studied the Caracoles. Since 1906 it was thought that giant turtles no longer lived on this island after an investigation carried out by the California Academy of Sciences in which the last documented turtles were found ( males) and an old shell, hence the reason for his celebrity.
In her book “The Lonesome George Story – Where do we go from here?”, Linda J. Cayot, scientific adviser of Galápagos Conservancy, affirms that the famous turtle owes its name to the World Wildlife Fund of Washington, DC, who gave him the nickname of a popular character of American television (George Gobel).
As he was the last of the species Chelonoidis abingdonii, he was transferred to a breeding center of the Scientific Station Charles Darwin on Santa Cruz Island to keep him protected.

Initiatives to conserve the species

To prevent the species Chelonoidis abingdonii from becoming extinct, there was to do that George to mated with females genetically close to him. Thus, a Yale University team (2000) specialized in genetics indicated to the breeding center of Galapagos that those indicated for mating were the giant tortoises of the Spanish island. But, George never showed interest in copulation and finally, like the chickens, the turtles laid infertile eggs.
Dr. Linda J. Cayot, also tells in her book that it was attempted, through stimulation techniques, to have George produce semen (performed by biologists from the research center) and no positive results were obtained. This with the intention of studying the possibility of artificial insemination. The health and diet of George was monitored, since at times he presented with dermatological and goitre complications and gained weight, but still nothing worked, explains the doctor.

Why was George so lonely?

According to Linda. Cayot, our lonely friend died of natural causes:

On Monday, Dr. Marilyn Cruz, a local veterinarian who often collaborated with the Park Service, completed a necropsy of Lonesome George, with a second veterinarian with extensive experience with tortoises, Dr. Joe Flanagan, participating by phone from the Houston Zoo. Their conclusion: Lonesome George died of old age, that is, natural causes. Most of his organs appeared healthy except the liver, which showed signs of advanced age.

But a fact that caught my attention was that apparently the apathy of George to copulate the female turtles and his unsociable attitude was justified by the fact that he was unable to reproduce by a malformation in his spermatic duct that did not finish develop.

One surprise was that it appeared that the tortoise’s sperm duct was incomplete, ending some four centimeters sooner than it should. Perhaps Lonesome George was physically incapable of reproducing, which might partly explain his rather solitary nature.

The body of the lonesome George was subjected to a process of taxidermy that was performed in the laboratory Wildlife Preservations by George Dante in New Jersey. It is a way of preserving its image for future generations, but it is also a symbol of extinction. It is exhibited in the breeding center of the Galapagos Islands. See you soon my dear friends. I wish you the best of days.

Very informative. Thanks to this.

Thanks for reading and supporting. Happy to share this information. Happy day.

$0.00
Reply
[-]
geopolis (54) 3 years ago
Your post has been personally reviewed and was considered to be a well written article.
You received a 10.0% upvote since you are not yet a member of geopolis and wrote in the category of "ecology".

To read more about us and what we do, click here.
https://steemit.com/geopolis/@geopolis/geopolis-the-community-for-global-sciences-update-4
$0.00
1 vote
Reply
[-]
ufv (52) 3 years ago

Thanks for the support. Excellent work that @geopolis are doing. Regards!