rahulrajput (43)in #environment • 4 years ago

Who knew these “rainy arches” had such a colorful history?!

It’s hard to see a rainbow and not feel like a little special something is happening. Some of us may even stop in our tracks and swoon at the beauty of the thing, not to mention become elated at the promise of good fortune to follow. Rainbows are stunning, like shooting stars and Northern lights, they are total magic, Mother Nature style. A fact not lost on just about every culture since time began.
But while we all know that a pot of gold awaits the person lucky enough to get to the end of a rainbow, what else do we really know about these candy-colored phenomena? There’s more to a rainbow than meets the eye! Consider the following:

In Greek and Roman times, it was believed that rainbows were a path created by the goddess of the rainbow, Iris, linking us to the immortals.
What do rainbows have to so with peacocks? The Greeks used the word “iris” to refer to any colored circle, thus the iris of the eye or even the spot on the tail of a peacock. Other words that take their cue from the goddess of the rainbow include the iris flower, the chemical iridium, and the word “iridescent.”

Even though rainbows figure prominently in the myths and religions of so many cultures throughout history, no one had any idea what the heck they actually were until the 17th century.

The Greek epic poet Homer believed that rainbows were made of a single color, purple. (How decidedly unpoetic.)

The Greek philosopher Xenophanes elaborated by bestowing the rainbow with another two colors, saying that it was comprised of purple, yellow-green, and red. 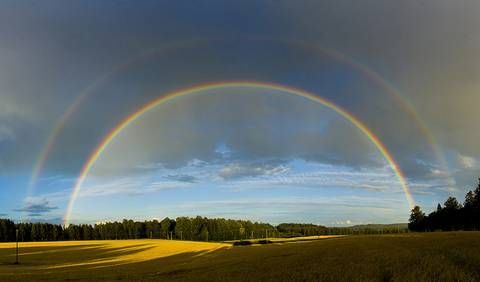 Congratulations! This post has been upvoted from the communal account, @minnowsupport, by rahulrajput from the Minnow Support Project. It's a witness project run by aggroed, ausbitbank, teamsteem, theprophet0, someguy123, neoxian, followbtcnews/crimsonclad, and netuoso. The goal is to help Steemit grow by supporting Minnows and creating a social network. Please find us in the Peace, Abundance, and Liberty Network (PALnet) Discord Channel. It's a completely public and open space to all members of the Steemit community who voluntarily choose to be there.

This post has received a 1.56 % upvote from @drotto thanks to: @banjo.