Pacific Brood - 50 word short - and an homage to mothers

This is a 50 word short story for @Jayna's current prompt: "hatch."
Also, continue reading after the short for a scientific Mother's Day blog post and a little background on the 50 word short. Tucked in a crevice, they hang beside her like chandeliers. Her pulsing breaths keep them clean. Safe. Motherhood keeps her rooted—not even a moment to eat. Gently, she brushes over them.


More than fifty-thousand burst forth and begin their fragile lives. Her final breath propels them into the great deep.

Please click the title image above for an amazing video filmed in the waters of Puget Sound by Laura James. Licensed under Creative Commons Attribution 3.0 Unported

This 50 word prompt inspired me to wander outside of fiction. It made me think of the greatest hatch I’ve ever come to know—the Giant Pacific Octopus.

If you were to ask me what my favorite animal is I would find it difficult to choose just one from the Cephalopod family. The bio-luminescence or color shifting abilities of various cephalopods is mind boggling, their biology is so incredibly unique, and how could someone not be amused by a Nautilus jetting through the water. I love them all, but I suppose I’ve interacted with and come to know the Giant Pacific Octopus best.

Populations of this octopus exist in Alaska and Puget Sound—two locales that are central to the person I am (just take a look at my username). One of the densest populations resides in Puget Sound, where some of the largest examples of the species have been found. They can grow up to one-hundred and fifty pounds (68kg) with tentacles stretching up to twenty feet (6 meters). However, the largest on record was six-hundred pounds (272kg) and measured thirty feet across (9 meters).

A research and rescue aquarium that we often visit in Seward, Alaska (about a three hour drive from my house) is home to a female Pacific Giant Octopus named Gilligan. These (low quality phone) photos taken in November, 2016 show my kids watching her move about the tank and provide some idea of her size. 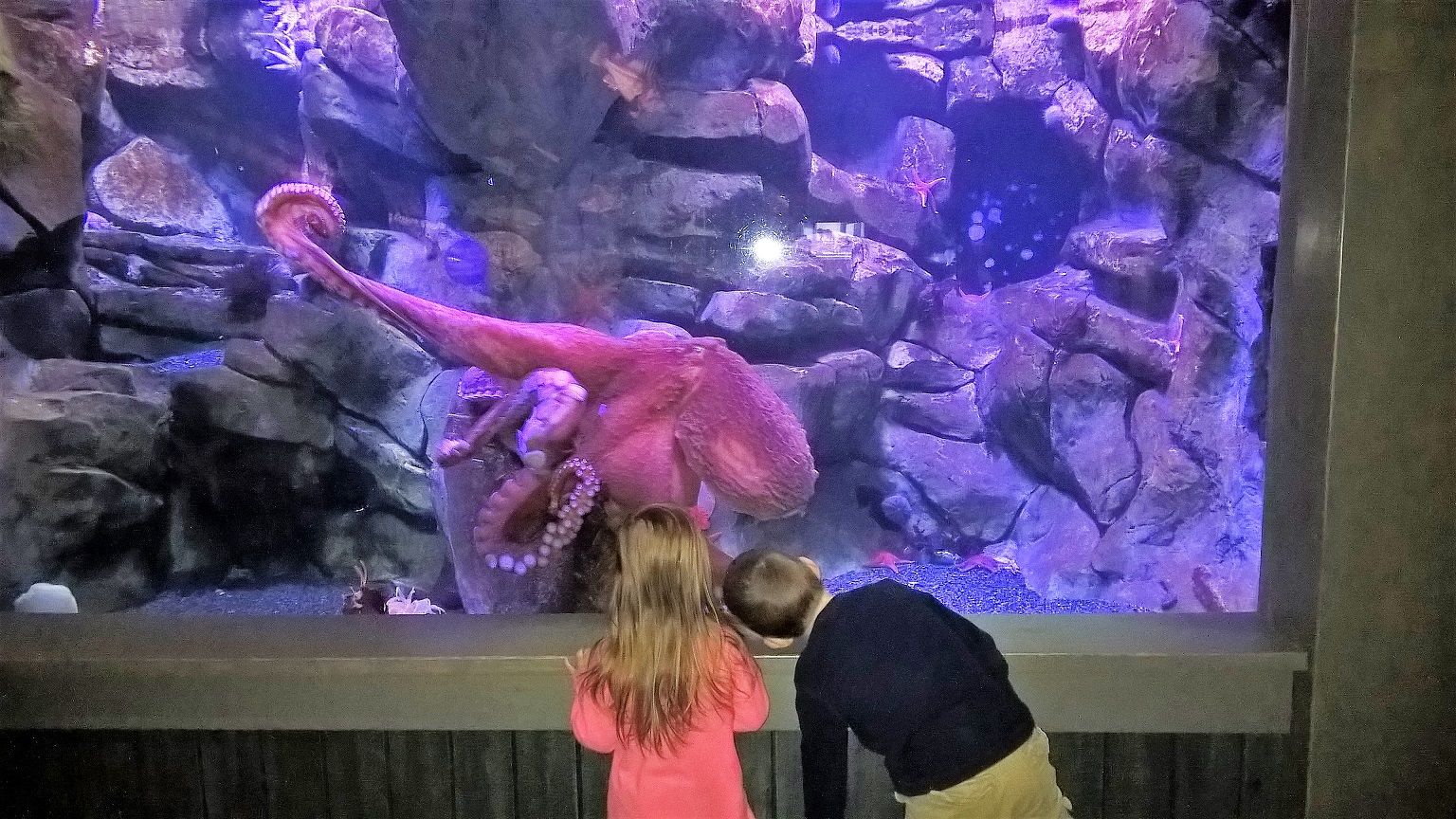 Gilligan is usually inactive when we visit. We were enamored with the privilege to watch her move about. 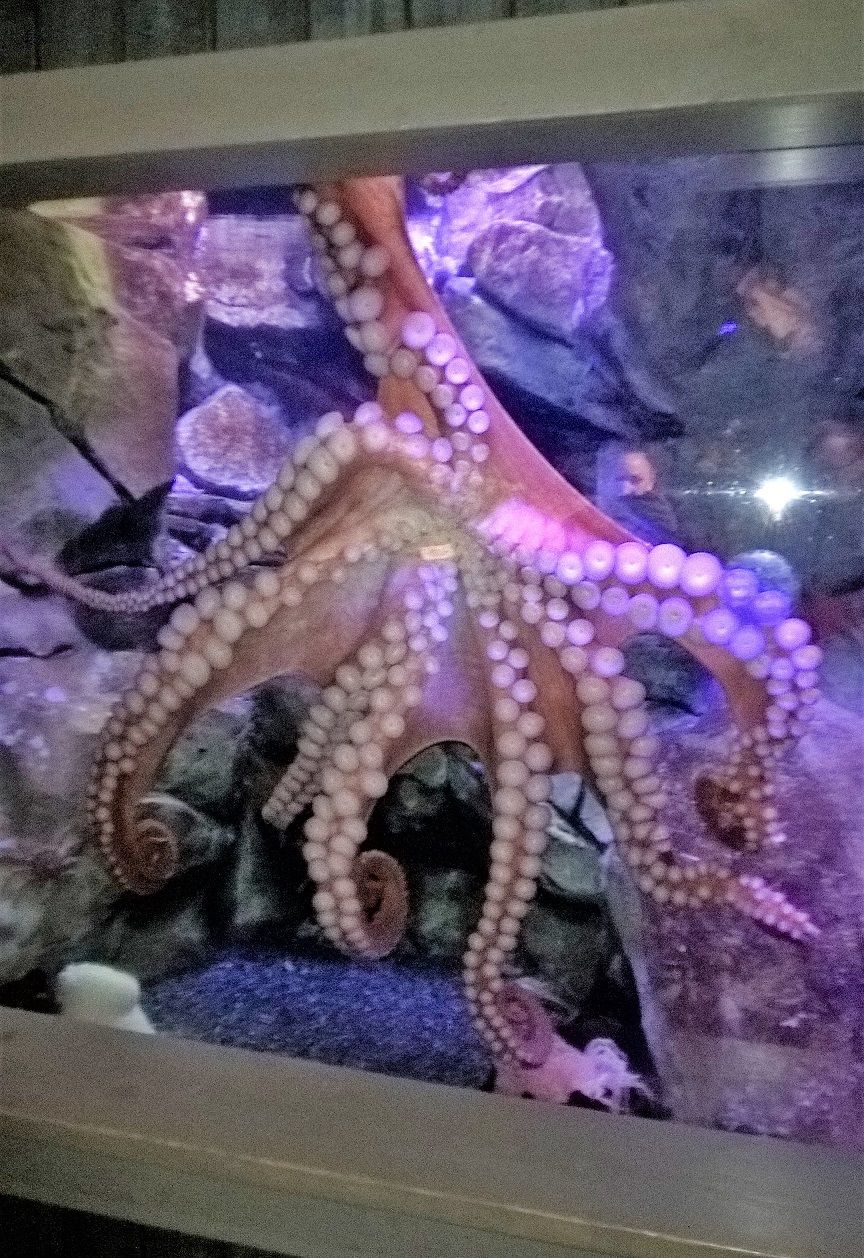 Gilligan spread across the entire height of the glass, really giving an idea of her size.

During our visit last October, Gilligan had a new surprise. A plethora of rice-sized eggs hung beside her. I talked with one of the staff for a while, learning all sorts of things about Giant Pacific Octopus motherhood.

It took Gilligan a month to build the strands that hold the thousands upon thousands of eggs, suspending them on the rock wall in her habitat. The eggs hatched at the end of April—almost a full year after she laid them. The mother went from fifty pounds down to thirty pounds in that time span.

In the wild, octopus mothers die after their brood has hatched, literally propelling them from safety into the wild ocean with her last breath. However, in the comfort of the caring hands at the SeaLife Center, Gilligan began eating again and remains alive.

On our last visit I was told that raising newborn octopi in captivity is extremely rare, and difficult. Their tiny bodies—already resembling their mother with the signature eight tentacles—are incredibly fragile. Only one aquarium has successfully nurtured a newborn into adulthood, and that was in the 80s at the Seattle Aquarium.

I was informed that the SeaLife Center's plan is to use a circulating tank very similar to what they use to house sea jellies. Bumping against a hard aquarium tank would burst the minuscule cephalopod’s body, so a current through a round tank prevents this from happening. They have the vastness of a whole ocean in the wild to grow up in, after all.

I can’t wait to go back to the SeaLife Center for another visit—one of the special tanks with some of the newborns is next to Gilligan’s habitat now. I will be curious to follow their progress, considering that even in the wild less than one-percent of young survive into adulthood. Their small size makes them victim to many a predator, but even with that threat removed it will still be challenging to provide the proper nutrition and conditions that will allow these babies to thrive.

I hope you enjoyed this post. Considering that Mother’s Day is this weekend, I think the display of motherly sacrifice exhibited by this animal is a perfect opportunity to reflect on the difficulty of raising children.

The time she takes to carefully lay her eggs, the sacrifice in her own health to protect them during incubation—to the point of death—all so that approximately two of sixty-thousand may survive. Wow!

I am blessed to have an amazing wife who is a loving mother to my two children. I’m thankful it won’t weaken her to the point of death, but nevertheless, it’s still an incredibly difficult task. I thank her for the sacrifices she makes every day to provide an opportunity for my kids to grow up and live fulfilling lives.

To all mothers and everyone with a mother, have a Happy Mother’s Day. Consider something you can do this Sunday to make sure she knows how grateful you are, and affirm that her sacrifices are immeasurably appreciated.

What a delightful post. Not only a charming fiftyword story but then a further one to boot. Can I ask whether Gilligan's eyes are visible in those photos?

I think over the last year the two species that have blown themselves inspirationally into my mind the most are cephalopods and fungi. I read about an amazing octopus in I think it was The Atlantic, and it blew my eyes open as to how intelligent these amazing animals are.

Thank you very much Sue. Yes, you can make out one of her eyes in the first two photos.

They are very intelligent, but what's even more impressive is their neurological composition. They have a "main" brain that is in charge of a network of "brains" in each tentacle. It's believed that the tentacles can work independently--the octopus gives the command to move that direction and the arms carry out the order. When it comes to details tasks or fine motor skills, the octopus can take direct control over a couple tentacles to tackle the job. Pretty wildly different than what we're used to in our own brain function and that of most all the animal kingdom. Cool stuff!

Thank you for commenting.

The life cycle of octopi had me in tears the first time I heard about it, and your story had me feeling those feels again. Then reading about the aquarium and Gilligan makes me so happy. Thanks so much for sharing.

Thank you for commenting, and I find it such a compliment that you said my writing brought about those memories and emotions. Thank you.

I was pretty happy myself when I gave the SeaLife Center a phone call to ask about Gilligan while writing this. She's still alive and doing rather well. Considering the plethora of baby octopi, there are still plenty left in her habitat after they relocated some to the special tanks. The person I spoke with said she seems to be protecting them--I wonder what exatcly that looks like. It's fascinating that Gilligan is likely experiencing something no Giant Pacific Octopus mother has ever experienced: protecting her young after hatching.

This is so great! I absolutely loved reading all about the life of octopi. I learned so much from this. The percentage of babies that survive to adulthood is really shocking.

Your 50-word story is a delight as well. Thank you for the lovely tribute to motherhood!

Thank you Jayna! I just couldn't resist this--the prompt instantly made me think of Gilligan.

I love this! What a cool mother's day post! I already knew this about the Giant Pacific Octopus from an amazing documentary, but you presented the short biology lesson in such a well written manner that I gobbled up every word :) Love the shots of your kiddos checking out Gilligan. I grew up in Haines in SE AK. Much love - Carl

Thank you Carlgnash! I'm glad you enjoyed it.
Haines eh? I'm familiar, but have never been. For those not familiar, Haines is remote Alaska.
So you escaped huh? Congrats. Heh heh.

What a great grab bag of content here in one post. A short story, a lesson on octopuseseses, and a tribute to motherhood. Unrelated entirely, except not :)

Thanks Neg! A grab bag indeed, but I think I did pretty well stringing them together with a ball of yarn. It's all connected you see... all of it... dons tinfoil hat

This is so good, Ak! Love the 50-word story as much as the experience you were able to experience.

That video is fascinating. Does she spread the oxygen through the eggs when she runs her arms through them, or is she trying to help the hatchlings hatch?

Thanks AK! She's actually preventing any algae or contaminants from latching onto the eggs by stroking them like that. Such incredible animals in every phase of their lives.

Oh! Oh, that makes much more sense, haha. They are indeed fascinating creatures and gorgeous.

I know my kids are cute, but you gotta admit the octopus is pretty interesting as well. 😉