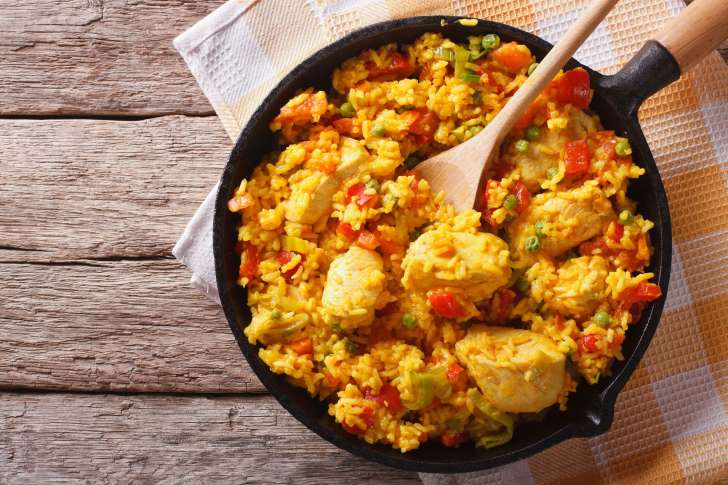 It turns out the oozy pile of cheesy goodness we’ve come to know down South as “ACP” started out its life on this earth in a very different form.
For those of you unfamiliar with the regional delicacy, ACP is a Southern take on arroz con pollo, a beloved Latin American dish consisting of chicken cooked on a bed of vibrantly seasoned rice. Our ACP usually features grilled chicken, rice, and a generous slathering of melted cheese. Where we heap on the cheese, Caribbeans traditionally pile on the veggies—and flavor.
Though most of us assume we imported it from our neighbors just south of the border, according to a recent NPR piece, arroz con pollo is really a bit of an afterthought in Mexican cuisine. “We do love chicken and rice, but rice is almost always a side, and we prefer chicken in tacos, in soups, inside enchiladas, or topped with mole,” the writer notes. Puerto Ricans and Cubans are widely accepted to have the market cornered on arroz con pollo, and few Mexican restaurants outside of the even offer it.
After some digging, NPR’s writer discovered that the modern ACP’s roots extend back to San José de la Paz, a village in the Mexican state of Jalisco of about a thousand people. Since the 1980s, residents of San José de la Paz have opened hundreds of Mexican restaurants across the South catering to non-Latino diners. In the late 90s, well over 540 U.S. restaurants traced their roots back to the village.
These restaurants did particularly well in the Southeastern states. The El Caporal chain in Louisville and Las Palmas in Nashville are just a few popular Mexican restaurants to come out of San José de la Paz, and they all worked off the same basic menu, with the ACP as its star. What can we say? We do love our cheese! Everything is better with melted cheese! Right?
"My dad didn't know what ACP was when he started," Charlie Ibarra, whose family hails from a town just outside of San José de La Paz and opened the El Rodeo and La Rancherita restaurants in the Raleigh-Durham area, told NPR. "I don't think he's ever even tasted it. But we sold it. It paid the bills."
The ACP, it turns out, is a uniquely Southern dish, and it’s time we claimed it. Please take this into consideration and help build a great platform!

You are cool. Thanks for sharing, hehe. I'm Oatmeal Joey Arnold. You can call me Joey.