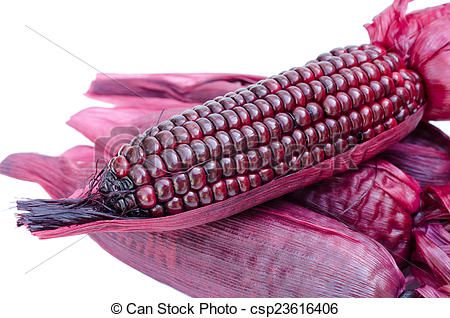 Corn is one of the most important staple foods known to man, it is known that currently is the cereal with the largest volume of production worldwide, surpassing even wheat and rice. From this grain you can obtain derivatives such as flours of different kinds and oils, besides that it is widely used in animal feed. For these reasons, its importance in the world economy is enormous.

It is known that corn (Zea mays) was domesticated more than 10,000 years ago in Central America. Most historians believe that this occurred for the first time in what is now Mexico, in the valleys of Tehuacán (Puebla) and Oaxaca.

According to scholars in Latin America, there are about 220 types of corn, of which 64 different types are Mexican. Among the many types of corn that exist, purple corn is of special importance in the Andean region. It grows mainly in the Andes of Peru, Bolivia, Colombia, Ecuador and Argentina, as well as in the Sierra Tarahumara (Mexico). There is also a very little known variety in Venezuela, in the Sierra de Perijá. All these varieties derive from the same ancestral line called "Kculli" that was cultivated since before the Inca Empire.

The color of this corn is due to anthocyanins, natural pigments also present in cranberry, cherry, raspberry, purple cabbage and plums. This represents greater nutritional benefits since these substances have an antioxidant and anticancer effect. It is also used as a natural colorant in the food industry. On the other hand, many studies show that dark maize has a higher percentage of protein than white maize.

In Ecuador it is culturally valued, especially at this time, since it is the main ingredient of the Colada Morada(Porridge of purple corn), a drink that is prepared on November 2 to commemorate the deceased. This tradition is very valid today, both in the countryside and in cities. To make its preparation easier, the "black flour" is commercialized, product of the grinding of this corn. There are innumerable Latin American myths that refer to corn. The Popol Vuh, Sacred Book of the Mayas is perhaps best known and regarding the creation of men it indicates that "of yellow corn and white corn they became the first mother and the first father". This myth of human origin is repeated in many indigenous cultures throughout the continent.

And in a really beautiful work, Father Our Corn, from the also Guatemalan Werner Ovalle López, who writes to them now has felt very well drawn:

With these verses of hope I say goodbye, wait for me the stove and the indescribable aroma of the whole mountain range, condensed in a pot of herbal tea. The flour must already be sufficiently soaked, perfect for the "Colada Morada" that I will now prepare. I'll be telling you ... 😉.

You can read my previous publications in these links:

Andean Blueberry: the fruit of the dead.

I never knew that corn was the largest crop. I always assumed it was rice. I also did not know that there are 220 types of corn! It is sad that we only get a few types of corn in the States. I still need to try Colada Morada. Great article!

@chefsteve Thank you very much for your comment. For me it is a joy to make known the best that Mother Nature offers us. I hope you can try the "Colada Morada". What I did was delicious ;) Greetings!

This is @lenasveganliving, nature surprises us every day. Thank you very much for your comment. Regards!!!

I was so excited today to see this post!!! My husband and I were snacking on some blue corn chips last night and I had asked him if he had ever seen the blue or purple corn - his response of course was 'no'. At around 11 last night we were reading about the blue corn and even watched a youtube video on it - now today, I see your post - Love it!!!! I have gained a lot of knowledge, thank you so much!!! Have a wonderful weekend Friend - resteeming because you are awesome!!!

What a joy to know that my post has come to you in a timely manner. There is much to learn from nature and food in every region of the world. Peasants and indigenous people have carefully guarded these and many other seeds. It is time that we all know them and value them as they do. Thanks for your beautiful comment and for reesteem =)

My pleasure - have a wonderful start to your day and keep on steeming :) SUNSHINE247

I like blue corn and purple corn, especially as chips.

@binkyprod Can you believe that I have never eaten the blue or purple chips? I'll have to try them soon! Thanks for comment =)

They are so good. I prefer the blue to regular yellow corn.

This post has received a 1.24 % upvote from @buildawhale thanks to: @mystic-natura. Send at least 1 SBD to @buildawhale with a post link in the memo field for a portion of the next vote.

Congratulations @mystic-natura! You have completed some achievement on Steemit and have been rewarded with new badge(s) :

Congratulations @mystic-natura! You have completed some achievement on Steemit and have been rewarded with new badge(s) :