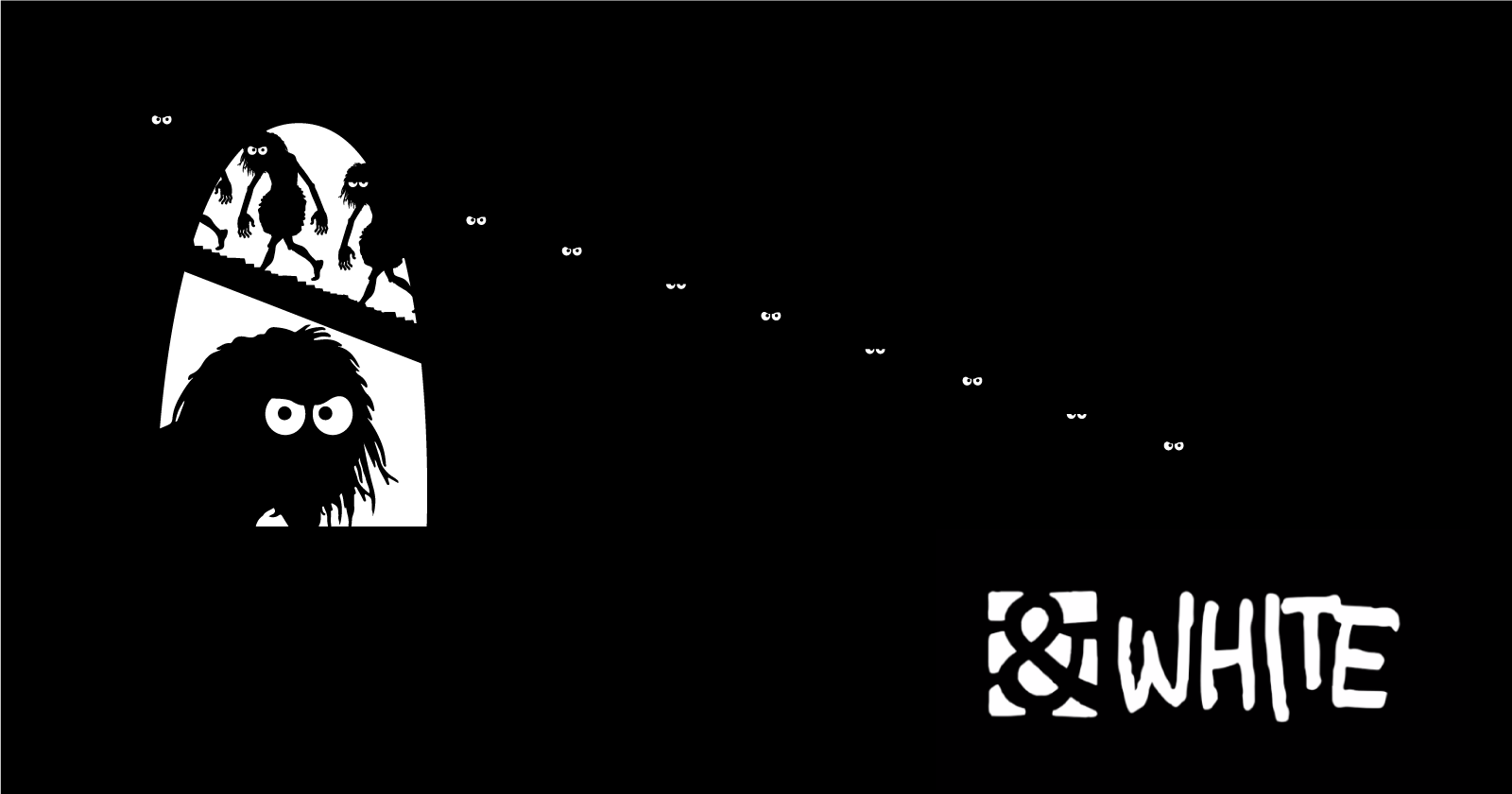 Hello, two weeks ago we introduced ourselves to Steemit. After two weeks we are already feeling at home here and the time has come to give you all some more details about the project we are currently working on.

&Black&White is a 2D mobile stealth adventure game developed in Unreal Engine. It is part of a multimedia project consisting of the &Black&White animated series and the videogame. We are in the project together with Amulet studio and our part of collaboration is developing the game while they are creating the animated series.
Right now, we are finishing the demo of the game and it will soon be available to play. 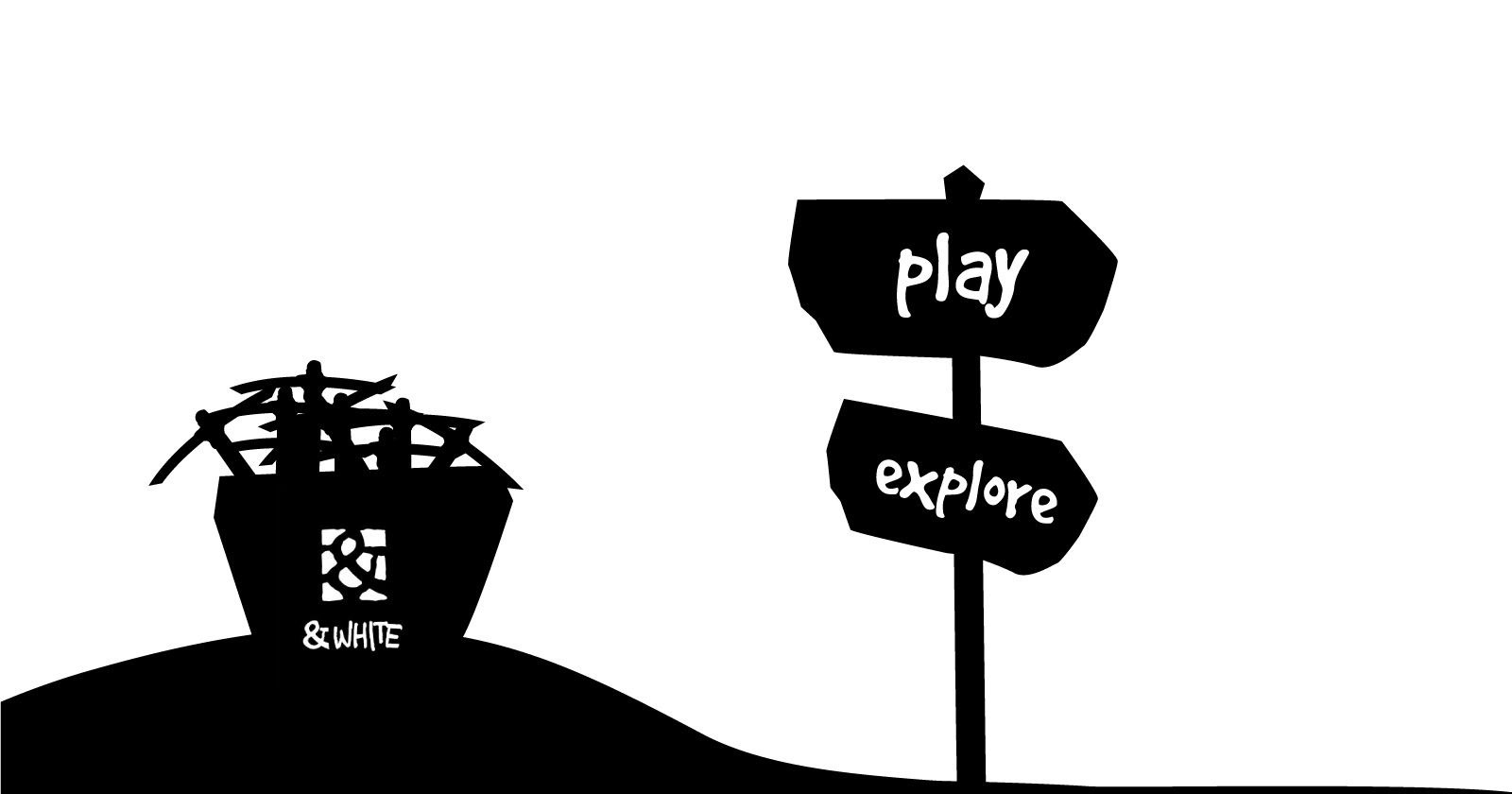 In the game you take the role of Bokh, a prehistoric thief who was trying to steal the Crystal of Time, a vortex containing various timelines, and ended up trapped inside the crystal. In order to escape the crystal, Bokh has to collect the smaller crystals at the end of each level while avoiding being seen by the Emenigos. 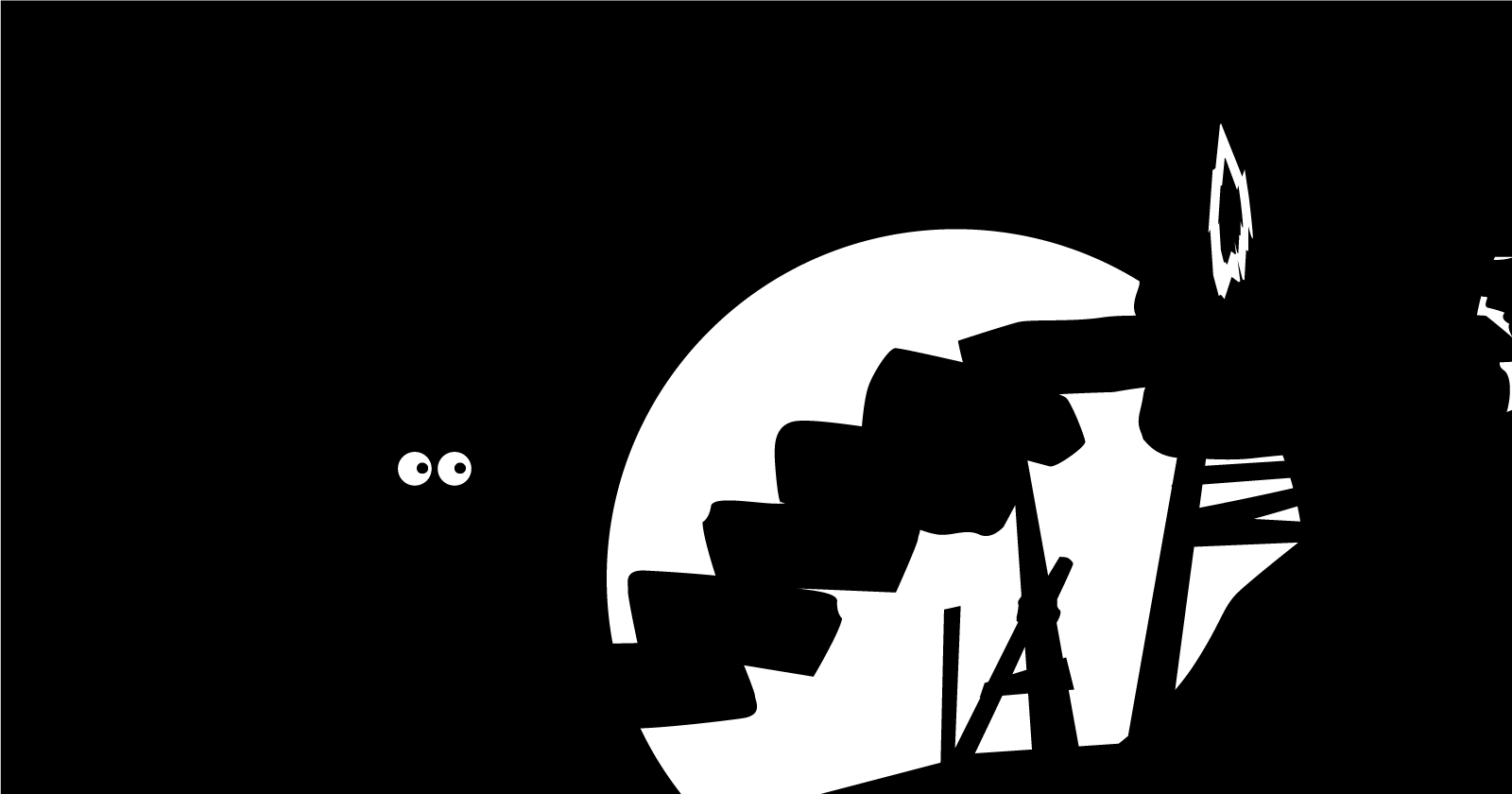 The Emenigos are employed by Negat’if, the overlord who wishes to keep Bokh trapped inside the Crystal of Time forever. 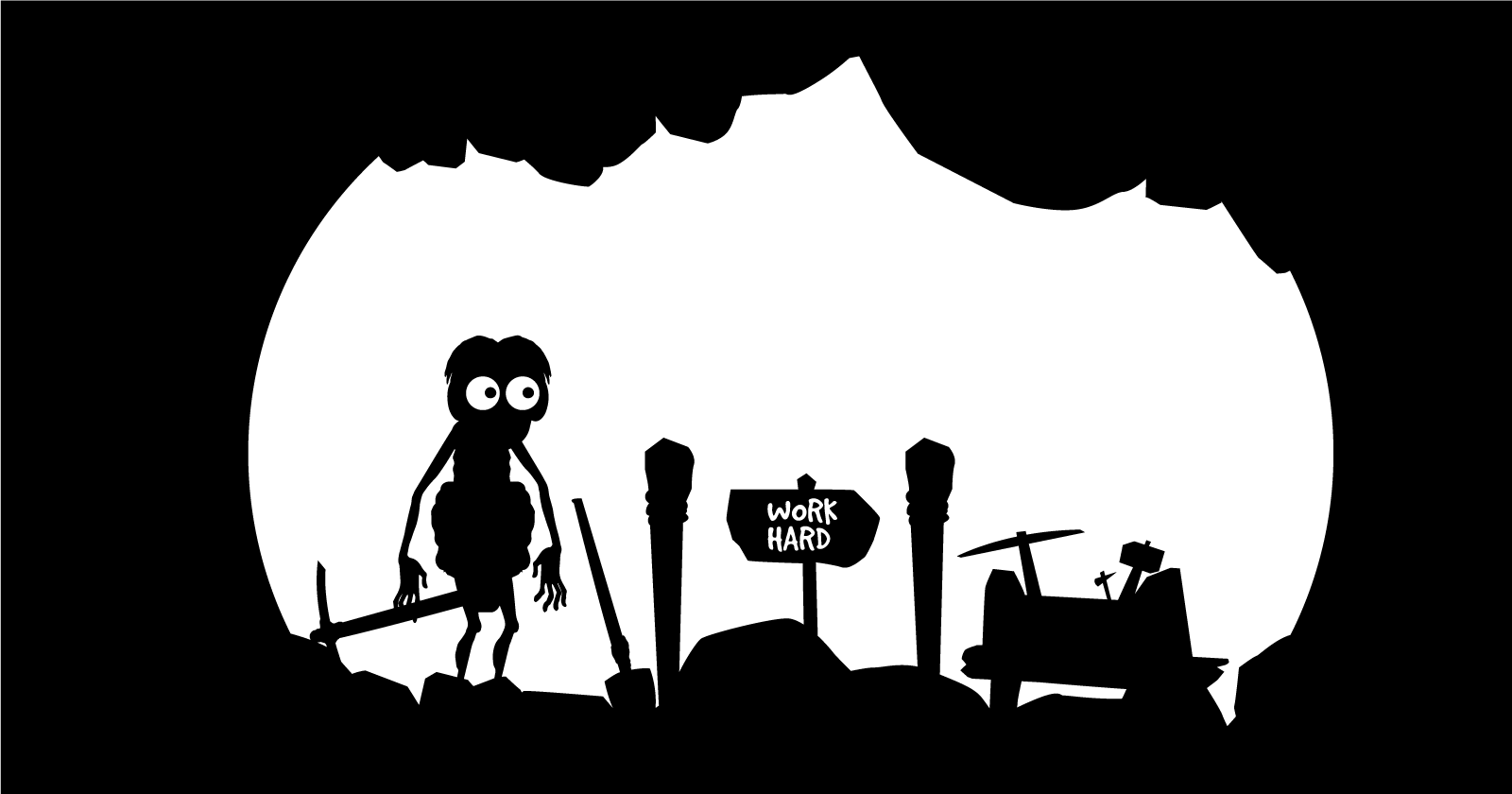 Besides walking around Bokh has only one power at his disposal; closing his eyes. Naturally when Bokh closes his eyes he can’t see, and it is only fair that the player can’t see anything either. However, while he remains in the darkness with his eyes closed he can’t be discovered by the Emenigos. 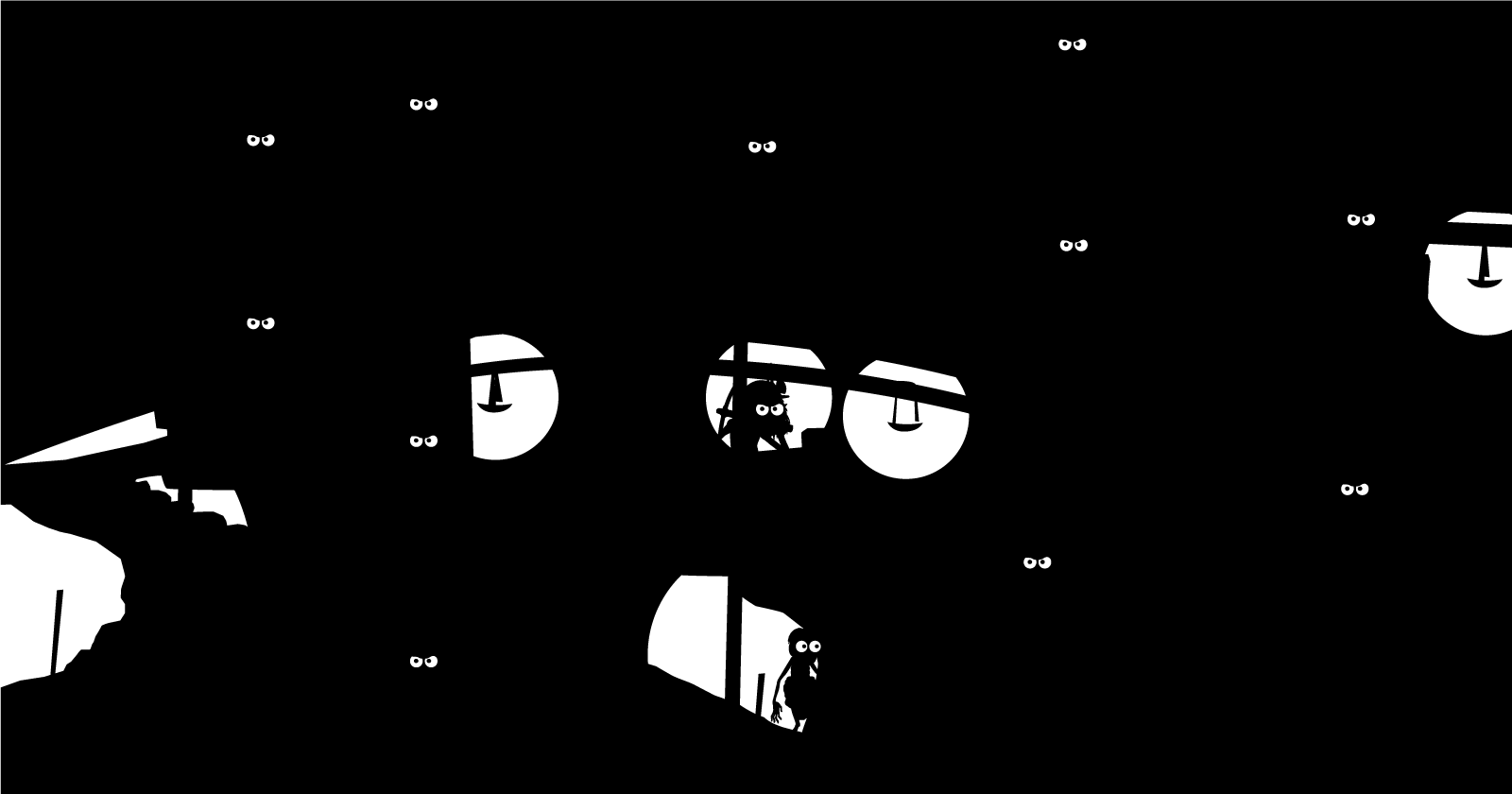 The Player has to avoid the Emenigos while in the light, and pass by them with his eyes closed in the darkness.
Emenigos move at various speeds, so the player has to navigate based on sound, memory and prediction while Bokh’s eyes are closed. If Bokh is seen by an Emenigo he will be captured and the player will have to start the level from the beginning. 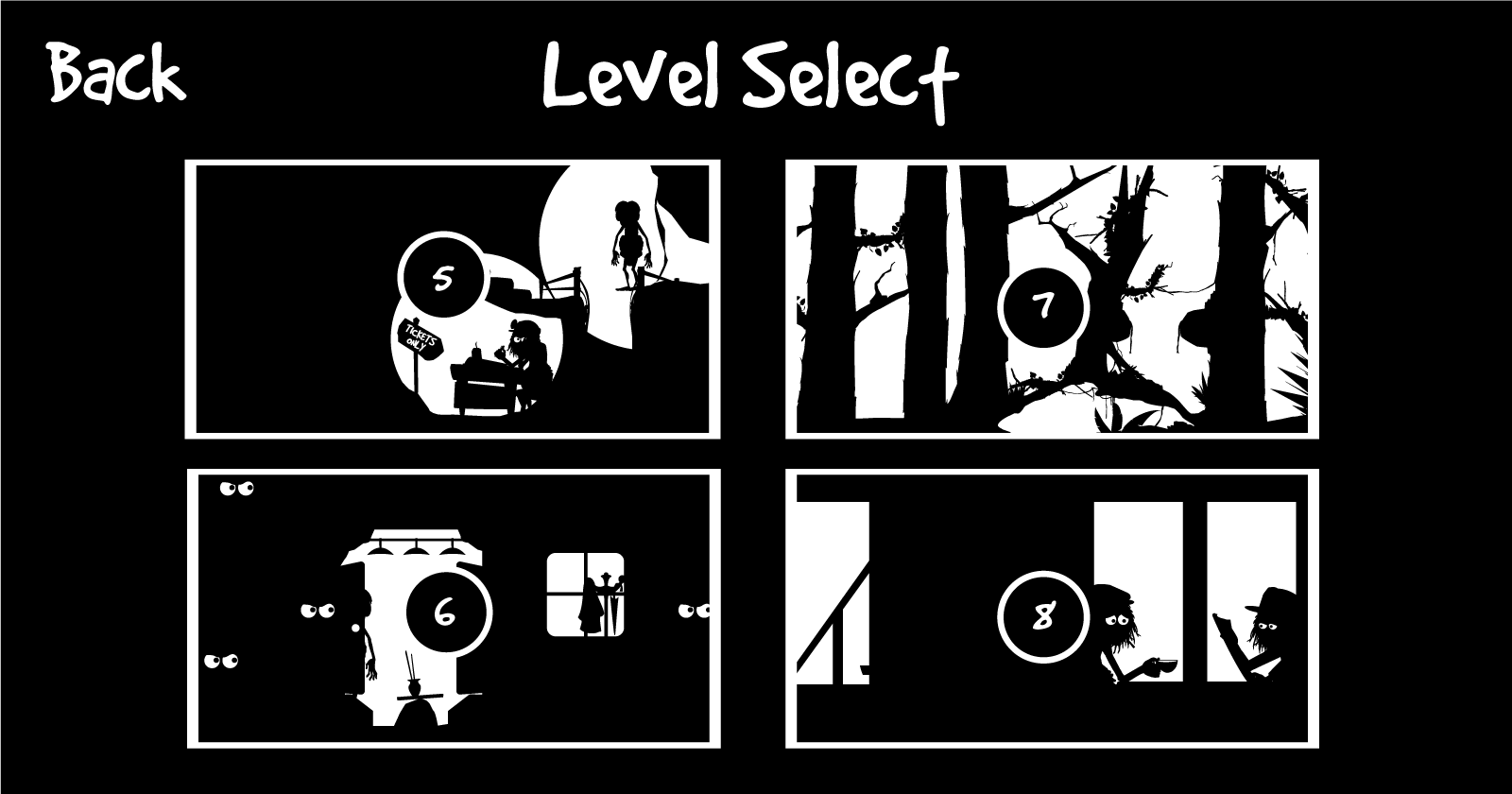 A short backstory where players are introduced to Bokh and his goal.

The game has a built-in music player where player can select any track from the game and listen to it.

Feature where player can view certain scenes from the game without fear of being discovered by the Emenigos. You are welcome to leave any suggestions or questions in the comments below. As a parting gift we are sharing another song from the game with you. If you want to know more about us, check out our introduceyourself post.
If you are interested in more music from the game you can check out other released tracks here and here.
On the other hand if you are interested in watching us have fun, you can check out the video of us recording the sounds for &Black&White game.

This post has been voted on from MSP3K courtesy of @isaria from the Minnow Support Project ( @minnowsupport ).

This post has been voted on from MSP3K courtesy of @isaria from the Minnow Support Project ( @minnowsupport ).

That's really awesome!
At the beginning idea reminded me of Plato's allegory of a cave with 'black soots' creatures from My neighbor Totoro.
I would like to try this game when finished, keep up with an amazing work!

Thank you very much for the compliments :) Plato's allegory is one of my favorite pieces of philosophy (although it is actually a dialogue between Socrates and someone that Plato has written down. I haven't watched My neighbor Totoro yet, it is one of the Myizaki's anime if I am not wrong?

You have been scouted by @promo-mentors. We are a community of new and veteran Steemians and we are always on the look out for promising authors.

I would like to invite you to our discord group https://discord.gg/vDPAFqb.

When you are there send me a message if you get lost! (My Discord name is the same as here on Steemit)

Oh that's interesting... will you be having game testers? Can we try it? Haha.

Yes we will, and yes you can :D We will make a post here when it is available to play.

Congratulations! This exceptional post has been featured in Episode 8 of The STEEM Engine Express Podcast. Click the link to hear what I had to say, and keep up the good work!

Thanks for the coverage :)

Welcome to steemit. Looks like a really cool game. I like that his power is to close his eyes. It seems like many of us have the same power

Only difference is; when we close the eyes it doesn't prevent the bad guys from making us lose the game. 😉

i would love to try this

You will get the chance soon enough! 😉

Will do, I am actually hunting down the bugs at the moment. There are still some parts of the demo that aren't working properly, but we will sort them soon. :)

Great post! looking forward for the release of the demo! Looks like a game my little bro would love so i'm going to tell him to download it too when it comes out!

You will have to tell us how does he like it :D

It looks like a great game I'll sure try it out :)

Thank you, there will be a post on steemit when it is out ;)

The design looks very interesting and cute. Negat'if looks amazing and reminds me of a very special music video from a band called Heilung. The gameplay also sounds interesting. Is he able to move around while using his super power? On which platforms are you going to release the game?

Thank you for the compliments 😊 The game will be released on Andriod and IOS.
Concerning Negat'if, we are still keeping his powers in secret as he will not be part of the demo. But you will encounter him once full game is released 😉
Is that video avalible somewhere on Youtube? We would love to see it.

Here you go. I´m always moved to tears, since the story is so sad and full of violence:

This band is great, message this video sends is really strong. Thanks for sharing this!
I also see the visual resemblance between Negat'if and characters in the music video.

wow it's looks kinda scary being all black and white though... you said it's mobile, so it will be for android and iphones?

Wild sounding game. Thanks for sharing.

cool game look. reminds me of the old school play station game skull monkeys. the animation feels aesthetically similar. anyway i heard you on the PYPT chat show and congrats on the game progress. definitely keep me updated on it. would love to see more when you're done .

Maybe because of the slouched posture of the characters? I don't remember the gameplay of Skullmonkeys, I only remember slouched guys with skeleton faces walking around. We will keep you updated, we can message you on discord when we have some news on the game if you don't mind.
Sorry for the late answer, it was a busy day today. :)

Beautiful aesthetic, love the minalmism. Gotta ask though, do the large portions of the crisp white (which looks awesome) strain the eye quickly while playing?

Most of the gameplay will take place in the dark places, so it is pretty light on the eyes. Thanks for the complimets. :)

Very unique and creative idea here... Thing that stuck out most to me was the Villain.. he was pretty creepy looking!! And why does Negat'if want to keep the protagonist inside the crystal? That was a question I had... Or maybe that will be revealed :)

Hey, sorry it took me a long time to answer, I didn't notice this comment right away. The crystal represents time, so technically our protagonist is trapped in time. In order to escape he has to assemble the shards of the crystal hidden in different times to find his way back to his era. Negat'if keeps them in different eras in order to prevent anyone who gets trapped, unable to easily escape. Bokh attempted to steal the crystal, and got himself trapped as he was unable to properly handle the crystal. :)