We greet you with our 17th devlog.
There were various things during the 17th week,
here is the summary.

From the last week, game design part is in a period of upheaval.
I try to make various attempts to improve the fun of the game.

It is quite stressful to earn gold to buy items,
We had to go back to the rooms that were visited,
to collect more gold.
It was tedious and meaningless.
That's not what we expected for our core fun of game.
So we decided to eliminate the gold from game.

The concept of the shop owner has been changed
to the quartermaster,
Now the power-ups were offered by free (not by buying).

The constraint of choosing only one of the three
has not disappeared.
But no longer being stressed by gold,
you can now gain one power-up per level.

In the case of consumable items
that were previously available in gold,
it has been changed to purchase with beat coin.

Last week, a change in the gun system
caused magazines and loading to disappear from game
and make players can unlimited firing.
Thanks to it, we did not have the stress of loading
and it makes UtG more pleasant action game,
but we concluded that there is a little difference
with our desired direction.

We have decided to limit the total amount of ammunition
to prevent unlimited raids
and to manage the ammunition strategically.
But the magazine system will not come back.
The bullet can be dropped with a certain probability
by killing the enemy.
(If the bullets run out, you should use melee attacks.)

We will continue to experiment and change over time. :)

We are experimenting with various graphics
to raise the quality of the dungeon
and to highlight the 3D characteristics of the game.

The floor-system was changed from tile-map to whole-map.
Based on PBR, we are experimenting
with mixing a little bit of realistic style and
widening the viewing angle for a sense of space.

So please continue to give us a lot of feedback. All the monsters that appeared in the meantime,
they launched a projectile to attack.

For the first time, the monster
which attacking the player through the attack method,
"Minotaurs" has been added. 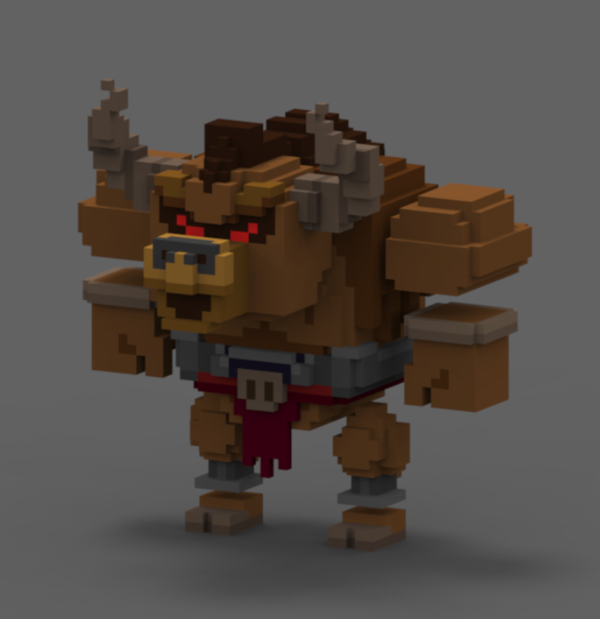 Minotaurs, with its stunning character
that pushes against everything,
will be a threat to you all over the dungeon
with its powerful stamina based powerful dash.

We already have temporary icons,
but we have added a map icon to make it easier
to identify quests, NPCs, and items.

We fixed some bugs we found during testing.

As game design changes are applied to the game,
UtF is becoming a more and more unique game.
Co-op mode is also cruising and you'll be able to see it soon :)

Today, we introduce the story of a new NPC Naive Nuts,
that will be deployed at the supply base. The 'Naive Nuts' are three brothers
made up of an eldest brother and younger twins.
They always keep their smile and try to think positive.
Sometimes it is a little overkill,
but they are mostly bright and pleasant crop humans.

These guys can walk around the dungeon without getting caught
by the monsters because of the inconspicuous small mass.
They sell various items gathered in that way in the supply base.
One day, after we demolishes the demons,
they want to build a big mixnut theme park on the ground.
Please cheer these friends' dreams!! :)

As you know, you can always play our game at
https://appetizergames.itch.io/under-the-farm

See you next devlog!!

HOW TO GET IN THE PLAYER-POOL?

(Pay once - play forever - win multiple times !)
All you have to do is sending once 10 SBD to @steemwin for a lifetime daily chance to win!