Getting Over It with Bennett Foddy review by FreddyFish

Getting Over It with Bennett Foddy review by FreddyFish 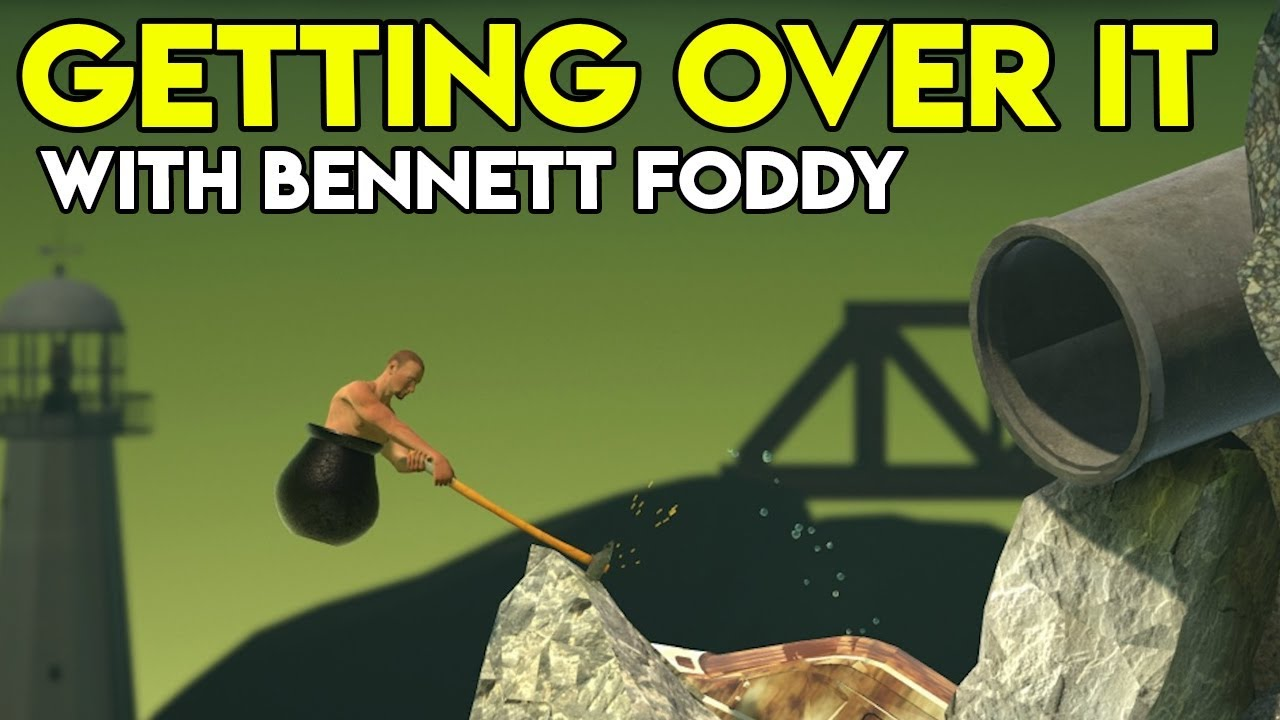 What is "Getting Over It with Bennett Foddy"?

Getting Over It is the latest mainstream "hard" game that a lot of your friends have played and not all of them have beaten. Most people who beat it can't stop talking about how good it is, people who didn't "just didn't enjoy the game". Some video game journalist is going to compare this game to Dark Souls, or Cuphead, or both.

Getting Over Dark Cuphead Souls with Bennett Foddy is a game about climbing a mountain made of Unity assets without any save points or even ropes. More specifically, you get a hammer and some ripped guy bathing in a cauldron. The game is dedicated to a B-game of a similar premise, and as you climb the creator of the game muses about it and strokes your ego.

Although Bennett Foddy takes pleasure in putting on sad music and reading you Nietzche quotes when you fail, the game is mostly fair. I can easily see a game like this going the route of "only one set of inputs will get you through this course", but there's a fair number of methods to get past each obstacle using the game's movement mechanics, from the start to the very end. I respect that because although I enjoy the occasional challenging game, I don't enjoy games where it takes more time to beat a section than it does to write a macro to beat it for you.

The game is the kind of 'hard' that consists mostly of learning, and how quickly you can get yourself to understand your obstacles affect how long you spend on the game. For this reason, Foddy makes the occasional condescending remark at Youtube and Twitch audiences for the game. He's right, though, because besides for getting used to the peculiar controls, all of the challenges comes from knowing where to apply them. Certain sections will disadvantage certain maneuvers, but once you learn your favorite way of getting past a section, you end up getting through it much faster the next time you're there.

The other portion of the game's challenge comes from the constant presence of pitfalls. Every section of the game contains at least one hole for you to fall in that can either lead back to a previous section or, depending on your speed and/or angle, another hole, which means you can fall all the way from the end of the game to the very beginning of the game if you fall right. However, as I've said before, most of your time isn't spent on the climb but learning how to climb. Falling back down to the start isn't a big deal. My first trip to the top took over 10 hours, but my second playthrough took 20 minutes, despite several big errors.

Most of the hype around games this tough stem from the fact that not everyone is going to get through it. The only reward for beating the game is the fact that the game has given up and you're still there. You "BEAT" the game and now you've joined the exclusive order of people just like you, the "Cool Guy Big Boy Good Gamer Club". Many people complain that bashing their head into a wall just gives them a headache, but you join the proud few who have both a severe headache and a pile of crumbled bricks where the wall used to be. This is fortunately not the only bit of satisfaction the game will give you (though it does make sure the final payout feels good). The mechanics are pretty fun on their own. Getting through a section quickly with a method you discovered yourself is a nice feeling. Figuring out the correct angle between forehead and brick is as satisfying as being done with hurting yourself.

The game is pretty well optimized for speed running, too. It's not something I'm into doing myself, but in a few months, there's going to be some guy who just flies through the whole level in half a minute.

If you're into "hard" games I'd say to go for it, but it's nothing life-changing. A pretty fun title with some interesting insights into the Unity Asset Store. My friend bought it for me; I spent nothing but my time on it and it was pretty nice. I'm probably going to play through the game more, so I can get the achievement for beating the game 50 times.

I hope so too, It will be great game but nice picture you have created.

Get your post resteemed over 90000+ followers and get upto $19+ value Upvote. Your post will skyrocket and give you maximum exposer.

See our all pakages at: