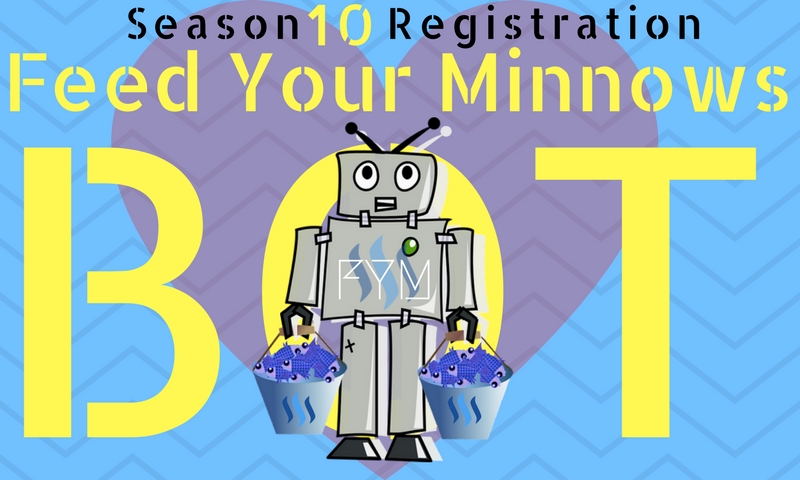 We have 80 members to feed this upcoming week! (33 #feedme members and 47 lifetime members)

Registering for Season 10 will let you allow you to stay in the Voting Pool for another week. If you are already a member you know what to do! Scroll down, upvote and comment with #feedme in your comment.

Members who registered correctly for Season 9

The total SBD earned by the post was 4.66 SBD. Not that much but every bit helps! I transferred a total of 9.32 SBD to the bot to help with the power up. =)

Special thanks to @em3 for giving the Feed your minnows post a bellyrub! Your generosity towards helping everyone will not go unnoticed. 100% upvotes from @feedyourminnows for the next week!

Currently, the bot has 2368 Steem Power and is upvoting away at around $0.08 per upvote. Some of the leased SP expired, but the new leased got filled. Each member can only receive one upvote per 24 hour period. Spreading the upvotes out making sure no user abuses the system.

Hi! I am not a robot and I just upvoted you! To be honest I do not give a shit that similar content was available somewhere else because I am here not somewhere else and in my opinion this cheetah thing is quite annoying. #feedme

That was quite funny, hehe. Thanks for that. I respect @cheetah for what they do in real spam posts. This is a project though and guess the comments will keep coming... I just ignore them. =)

Well, the problem is that this cat seems to be pissing all over the place while it should limit its activity to those posts which really fits inside cat litter box 😸

Thank you, @scrooger! :) I just did the payment for feedmeforlife - hope all is good! Also upvoting and resteeming this post! Cheers for all that you do...

Awesome, saw your upvotes for life registration. Will be updated in our next season.

You are most welcome! Appreciate all you do too! =)

Each bit counts! Keep up the good bot!

I transfered 1 SBD @feedyourminnows #feedmeforlife but can't find me on the above list ;(

I saw the transaction, it was made after I posted this post so I will update it in the next post. =)

Alright - already guessed I was too late for this week ;)

Congrats! Your post has been featured in The Daily Qurator # 66. I hope you liked it Thank you for one more week @scrooger!

This post has been ranked within the top 80 most undervalued posts in the second half of Nov 12. We estimate that this post is undervalued by $9.19 as compared to a scenario in which every voter had an equal say.

See the full rankings and details in The Daily Tribune: Nov 12 - Part II. You can also read about some of our methodology, data analysis and technical details in our initial post.

Oh thank you for this project ! I love it it helps minnows ! #feedme

Hey! I'm a new member of @qurator and now following you :) It's wonderful meeting you!

This initiative is excellent @scrooger #feedme

#feedme . please!! lol. Thank you so much for doing this!! It really helps all of us! Every vote counts. How do you define minnow? We just had a little discussion about that....

Hey there! Apologies for the late reply. A minnow for me is someone still new in the pool. They don't have much influence but are always hungry.

You can crunch the numbers on what exactly a minnow is but I think as soon as you can upvote and think, hmmm... that's a pretty nice upvote. Then you are no longer a minnow. =)

that is what I thought too - then I was told that redfish are even lowlier than minnows and that is the pond I am swimming in :)

I won't say you are a redfish, I think that is only for users who just started, where their upvote is just a mere bubble in the pond... floating to the top, unnoticable...

Got to love free food #feedme

Oh that´s great scrooger! I just send 1SBD to @feedyourminnows so that he will #feedmeforlife ;D

#feedme I also transferred 1SBD for lifetime food. Lol...
Thanks for this initiative @scrooger

say, can I get that awesome line divider you use?

Thank you. Briliant ideas, I like to be a lifetime member :)
#feedme