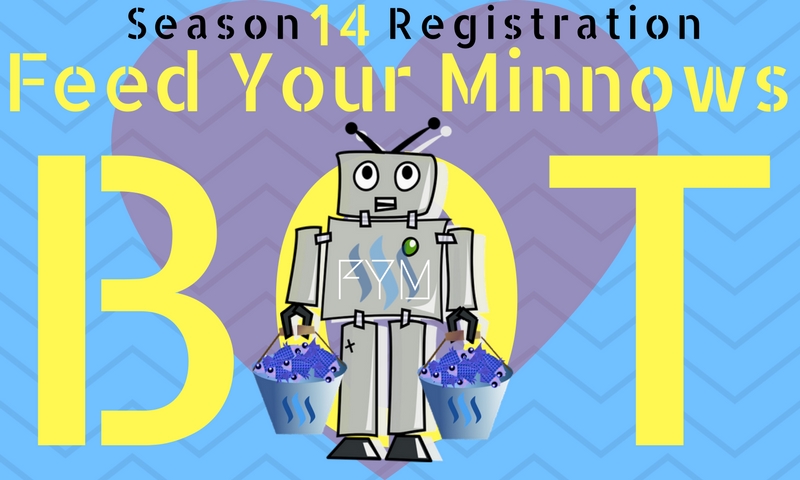 This season is sooo late! Apologies! Had to move to a new apartment and some big changes at Qurator. Your upvotes are on their way! =)

We have 120members to feed this upcoming week! (53 #feedme members and 67 lifetime members)

Registering for Season 14 will let you allow you to stay in the Voting Pool for another week. If you are already a member you know what to do! Scroll down, upvote and comment with #feedme in your comment.

Note: I was 3 days late with this post and I really do apologize, but every cloud has a silver lining. All the members who commented with #feedmeregardless if they upvoted will be included in the pool this week! Merry Xmas.

Members who registered for Season 13

Users who paid the 1 SBD/STEEM for the lifetime membership:

The total SBD earned by the post was 6.108 SBD. Not that much but every bit helps! I transferred a total of 36 Steem to the bot to help with the power up. =) WHOOHOO! Biggest boost to feedyourminnows yet! Now to get that lease filled... hmmm

Currently, the bot has 1,648 Steem Power and is upvoting away at around $0.06 per upvote. Some of the leased SP expired, but the new lease is in the market and should be filled soon, it will be a big one and should pretty much double the upvote value! Each member can only receive one upvote per 24 hour period. Spreading the upvotes out making sure no user abuses the system.

I noticed some members taking advantage of feedyourminnows by only upvoting at 1% and then receiving the 1 week of $0.06 upvotes. I understand some users have a lot of SP and do not want to upvote at 100%. I understand that 100%, upvote what you feel you can spare to feed the minnows.

The new rules are:

Please and thank you! Help me feed the hungry minnows!

P.S. If you can tell me what movie this is from and comment it in the comment section there is a 2 Steem prize in store! =)
The previous movie was: Dodgeball: A True Under Dog Story. Congratulations to @ironshield for winning the 1 SBD

I need to watch more movies, ihave no idea where that if form!

Wow! Haven't seen you in a while! Missing all the interaction! My projects keeping me way too busy! But working on a new schedule to post more and catch up on the awesome users I keep missing... Like you. =P

P.S. It's a must watch! You will see the comments later and then I highly recommend it! =)

The movie is snowpiercer
#feedme

Whoo hoo! Thanks for the 1 SBD ! #feedme

#feedme The gif is from the movie Snowpiercer.

Upvoted and much appreciated @scrooger! Thank you for this initiative.
#feedme please :)

#feedme Mr Robot! Also this gif is from Snowpiercer

#feedme thanks for the support @scrooger!

i like the new change and its true and i always gave my 100 % because already get maximum so why not 100 %.
movie name is snowpiercer cray girl hehe
and finally #feedme

Congratulations @scrooger! You have completed some achievement on Steemit and have been rewarded with new badge(s) :

#feedme
The British actress in the GIF in this post is Tilda Swinton from Snowpiercer.

Thank you for this!!

thanks for upvote my posting.. good luck.

Not sure I have seen that movie. It's too old, looks like from the 70's and super creepy.

The movie is snowpiercer.
#feedme

#feedme , and yes I think it's Snowpiercer :)

Hey
It is a great project
#feedme

#feedme
Oh and... the gif is from Snowpiercer, as has already been mentioned :< A little too late, I was.

Signed up for over 2 weeks and I'm absolutely in love with the idea of a social blockchain platform. We're producing content for over 7 years and the only one who really earns from it is Facebook and Instagram... so for the first time our hopes are up again.... #feedme is such a neat idea. Thank you!

I'm new to steemit
What does minnows mean ?

I really like your initiatives that you´ve came up with on steemit so far. The Qurator is simply awesome and feed your minnow as well :) Keep going ;)