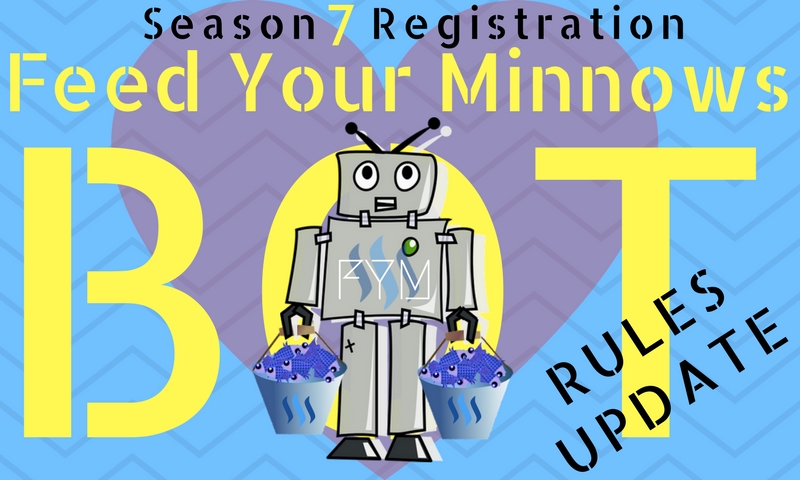 We have 20 members to feed this upcoming week!

Registering for Season 7 will let you allow you to stay in the Voting Pool for another week. If you are already a member you know what to do! Scroll down, upvote and comment with #feedme in your comment.

Members who registered for Season 6

The total SBD earned by the post was 2.254 SBD. Not that much but every bit helps! I transferred a total of 4 STEEM to the bot to help with the power up. =)

Currently, the bot has 1009 Steem Power and is upvoting away at around$0.06per upvote Some of the leased SP should be expiring soon, but the new lease is in so we should stay above 1K SP. Each member can only receive one upvote per 24 hour period. Spreading the upvotes out making sure no user abuses the system.

Awesome bot. Really a great addition to the community!

I have membership, but it like to get food so please #feedme :) I hope my vote count and will add to some nice amount. I like this and i usually spread the word. Thanks. Keep it up.

You are always welcome! You have been around for a few seasons now, right? Still, your lifetime membership is safe and will stay active as long as you do. =)

Thank you :) I believe I was here since the start :D

Thanks for always hanging around and supporting little projects. Nice seeing you around every once in a while

@raserrano is the Huey to your Scrooge.

This post has been ranked within the top 80 most undervalued posts in the second half of Oct 19. We estimate that this post is undervalued by $15.73 as compared to a scenario in which every voter had an equal say.

See the full rankings and details in The Daily Tribune: Oct 19 - Part II. You can also read about some of our methodology, data analysis and technical details in our initial post.

AWESOME! Thanks for everything, the donation will be greatly appreciated by those who need to be fed! =) Thanks

Hello @scrooger! Will you #feedme, please? :)

Still following regardless of the rules, just because, upvoted the post and resteemed for greater exposure to all. Stay Strong, Press On and Charge the Hill! Passionate about your Dreams!

Thank you for all the kind words, upvote and a resteem! Looks like I got the full package. =P

I'm confused, seems to be my normal condition when it comes to Steemit.
Do I have to comment #feedme on certain posts, or all posts?

There are just TOO many things to remember around here. Sorry. ^_^

I'm confused, seems to be my normal condition when it comes to Steemit.
Do I have to comment #feedme on certain posts, or all posts?

There are just TOO many things to remember around here. Sorry. ^_^
I"m so sick of this. This is the FIFTH TIME I've tried to post this reply

pls #feedme ;)
Thanks ;)
but you there: https://steemit.com/giveaway/@honolulu/free-sbd-giveaway-list-wn-43
hope this is allright with you ?

What a great idea. I'm only just getting started with steemit so if you can #feedme it will be much appreciated!